My second morning free to ramble in the Ochil Hills and already their appeal was winning me over.

The forecast had been poor for the morning, it turned out to be correct. Damp and with a fresh wind blowing. However, with a family day trip to St Andrew's planned, it would be the morning or nothing. There was only one choice!

I'd toyed with tackling Innerdouny Hill as the Kinross-shire county top but opted for this one as had been my original plan. I can always come back!

There was plenty room for the car at the entrance to the forest track I'd begin on and as I parked up the heavens opened. I figured the trees would give some shelter so fished the umbrella out the boot (to keep the waterproofs dry of course).

Onwards and not to steeply upwards on a decent stony forest track soon had me gaining height. There were views west across the Ochils. This is fine country I was thinking.

There is a bit of a switch back on the track and soon after a wee cairn marked the fire break I knew was the usual route to the top. Things got steeper now. Had it been dry this would've been no problem but the wet mud was slippy. However the rain had stopped and now the umbrella really came in to it's own as a walking stick! I managed to get up the muddy path without landing on my derriere and emerged from the trees into what seemed a howling gale.

What a view though. Crepuscular rays beaming down on Loch Leven. I captured the scene on the camera trying to stay steady in the wind but it is never truly the same as seeing them and being there in that moment.

I pushed on as another shower began and a lovely rainbow stretched across the landscape. Steele's Knowe (where I'd been two morning before) was in view though spoiled a bit by the turbines. I bagged the trig first as this had been my main objective and then the nearby summit cairn.

Had I more time, had there been less wind then this would've been a place to linger but never mind I was certainly awake now! I returned the same way and fully expected to end on my bum descending the muddy path but the umbrella didn't let me down. Part of yet another gorgeous rainbow filled the fire break and I told myself to keep enjoying these wetter days. 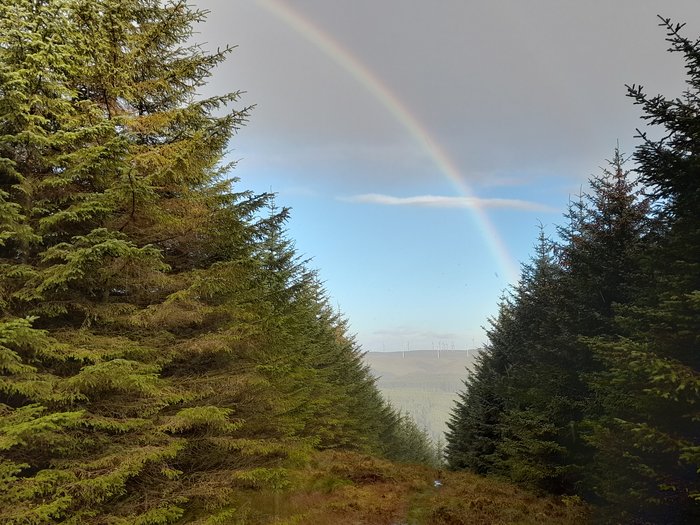