The Met Office had assured us that we were in for a good day. HA. As we drove along a rainy Loch Lomond, I assured Jimmy that we were still a good distance away, and that there was plenty of time for it to clear. I became less certain the more north we drove, and although the rain had stopped by the time we reached the end of Loch Arkaig, the hills were ensconced in clag (even though the continually updated Met Office information continued to insist that viz on Sgurr Mor was “E” (excellent) for the entire day. I think—no, I *know*—that Jimmy would say that the Met Office has a lot to answer for.

We left my house (the southern one) just after 5am, with a plan to be walking by 8:30 or 9am. As per usual, it took longer than we thought (or than google map said) to finish that interminable drive; we also required a break for me to get my nausea under control (on the way out, too!

It was a bit after 9 by the time we set off. The car park was fairly busy for a mid-week, getting-to-be-off-season day, and there were two other groups that had set off just before us. We’d speak to them, and leapfrog them (and they us) throughout the day. We were all—how shall I best say it?—pretty disgusted by the inaccurate weather information. 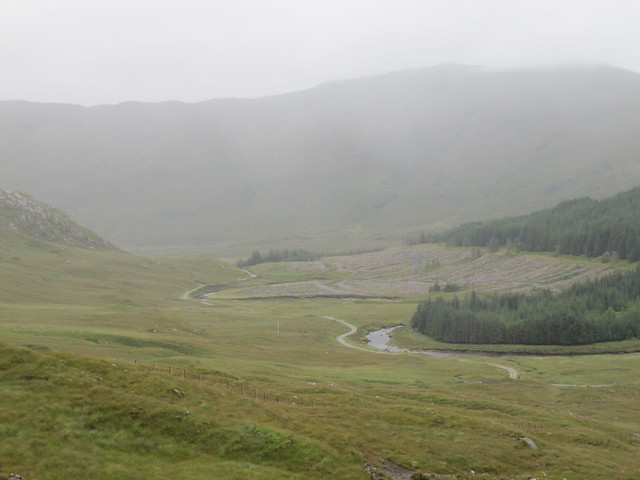 The first ascent isn’t (wasn’t) actually all that bad. The flattish ground across the wide pass was wet, and there were a few muddy areas that required a few extra steps to avoid. It didn’t seem like very long until we were looking down into Glen Kingie, and its eponymous river. I’d been worried about the crossing, but I needn’t have been. Even though there’d been heavy rainstorms in the days preceding our outing, we managed it without difficulty and with dry feet. I seem to not even have taken a photo of Glen Kingie, which is rather lovely. 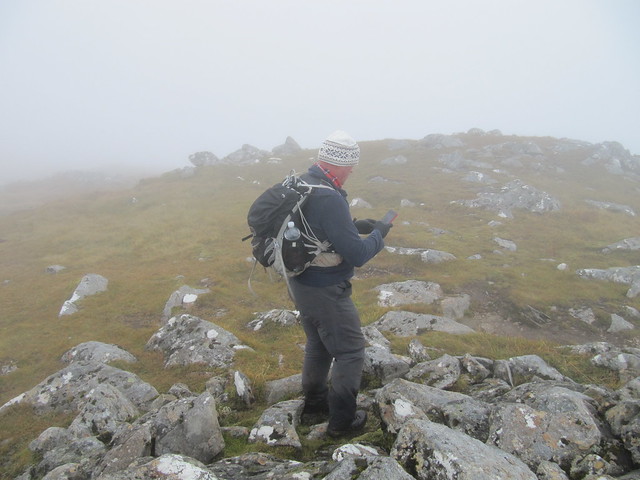 The tops were still ensconced in cloud.

I struggled mightily on the ascent up to the bealach. My legs felt like jelly, and any confidence that I’d built up some fitness on my most recent Corbett outings fled. It had been almost a year since I’d summited a Munro, and even longer than that since I’d done such a sustained, pathless, and relentless ascent. I didn’t remember it being such a long slog when I did this route with David a couple of years ago (it is possible that I was in better shape, and a couple of years younger). I did think, once or twice, about heading back to the car and waiting for Jimmy there. He managed to coax me up to the bealach, and from there, I sent him to trot along to the Corbett; I wasn’t fussed about climbing it again, especially if there wasn’t to be a view!

I sat and ate a half a sandwich, and did enjoy what view there was down over Loch Quoich. Not long before he arrived back, I got a horrendous cramp on my left leg, in an unusual place, the inside thigh. I couldn’t figure out how to stretch to relieve it! But I did manage to walk it out eventually.

We carried on to the summit of Sgurr Mor. The tops were still ensconced in cloud.

It was a right shame. The WH desc gushes over the views; we saw none.

We took a summit selfie—yet another of the “we could be anywhere” variety—and started the long trek back, which was long but uneventful. I think we arrived back at the car around 6:30pm or so. 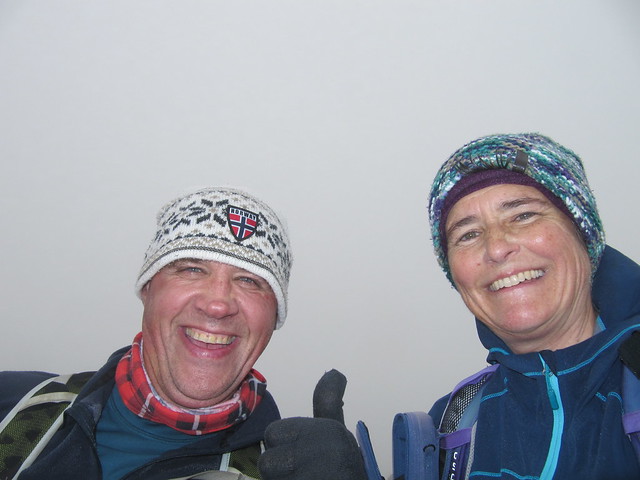 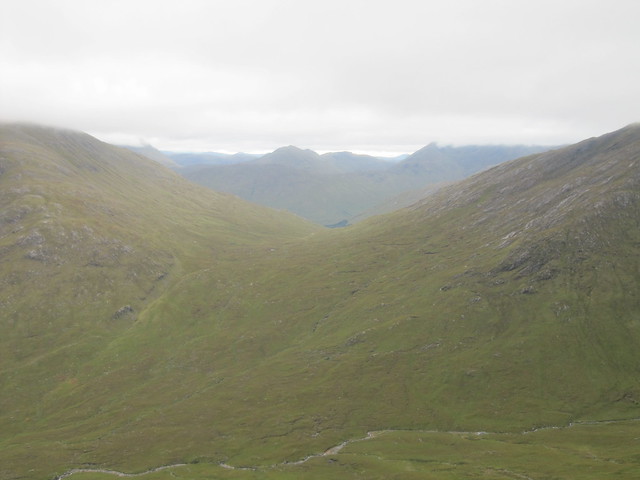 the "back over the pass" section ahead; the cloud level rarely shifted 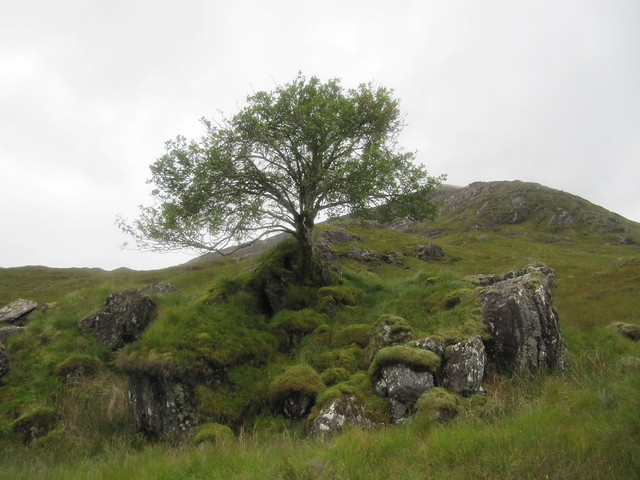 interesting tree; seemingly growing right out of the rocks

The tops were still ensconced in cloud.

) , interrupted only by petrol and food stops in FW, and we were back home around 11pm. Huge thanks to my companion for good company, for *still* not getting annoyed with my whinging, and for driving. I took 9 photos.