Had been looking forward to this over night Bothy trip ever since I had read Greame Dewars report on it a wee while back. I had intended including the Graham Creag a Mhadaidh but during the trip I just could not find the energy or the strength.

Arrived at 3 oclock and found myself stuck in the snow just off the A9 as I entered the slip road for Dalnaspidal lodge. I never expected the snowline to be this far down, and as I had never bothered to pack a shovel I knew this would be a major headache. Lucky a guy from the cottage appeared with 2 shovels and soon we got the car unstuck.

I had intended parking at the top of the road, just off the A9 but the guy that helped me from the nearby cottage suggested not do this unless I wanted to run the risk of getting broken into. He said it would be okay to park at the end of the cottages as long as I stayed clear of the gates. He also said he would leave a shovel at his back door for me the next day if I so needed it. What a kind and helpful chap this man was.

More than an hour later I was on my way. Passing the farm and the lodge heading in a SE direction. Even at this point the cloud was very low with next to no visibility. About 0.5km further down the track I thought I might start to see Loch Garry but there was nothing. Now might be a good time to look at the map I thought to my self, and when I did I realise my mistake. But instead of turning back I carry on for a few hundred meters and then head directly up for Sron na h Eiteich.

This was a bit of a killer on the legs with the big winter back on, and packing some fuel for the bothy fire I was finding it tough already. By the time I had reached 650m I had to get the head torch on and double check all my navigational equipment was at hand.

I was in new territory….. On my own, navigating at night and in the middle of winter “ I must be mad “. I was feeling excited and confident; I was really starting to enjoy myself.

On reaching Sron na h Eiteich a bit of extra care with the navigating would be needed. There is a left hand dogleg to negotiate on the way to the summit. To far west at this point would have led to a long slide down to the Loch. Haha

Summit reached at 6.45pm. I got a quick bearing and headed on my way, the Bothy was still a long way off. I headed for Sran nam Faiceachan then down onto the flats at the head of the loch South of Duinish bothy. Was very tricky trying keep the feet dry at the same time as constantly jumping burns, pools and bog. But somehow I reached the bridge with relatively dry feet. A quick check off the map confirmed the bothy was about 600m north along the track. Happy days. Bothy reached at 9.45pm, had taken me about 5.5hrs and I was utterly knackered but very happy with my achievements.

Soon I had a big fire going, at one stage the bothy was actually nice and toasty. Wilson hogged the fire most of the night was de-iced come 11.30. I managed several large poor men’s Irish coffees followed by a couple triples just to set me off to sleep. A fine end to a special day.

Slept solid until 7.50am and although I did feel a tad (ruff) due to the coffee, I decided to do the Corbett Beinn Mholach but save the Graham for another visit to this cracking Bothy.

Beinn Mholach was a tough Corbett in deep snow, the views were worse than the day before and the wind chill seemed pretty severe. Visibility was down to very little, but after nearly 2 hours battle we reached the massive cairn. Quick couple pics then back down to the Bothy for a brew before heading out.

This trip had everything for me except the views. Best experience on the hills to date…………

Ps.. i did take my camera but i forgot to load the battery. Dohhh . The few pics below that i did get were pretty poor. 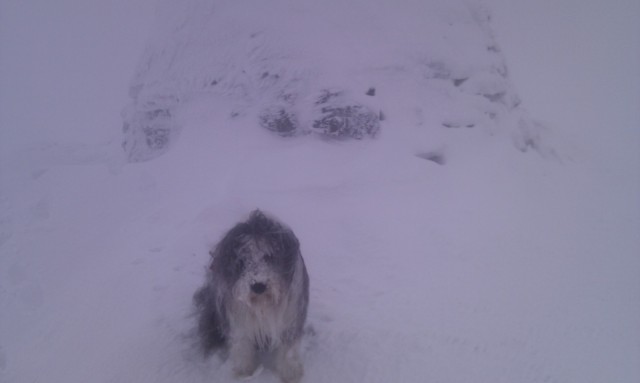 trig point and cairn (yes views were this bad) That looked a bit of a challenge - pity you couldn't see anything.

That's a fair old route in these conditions - well done.

I like the oddness of the whole trip. Good stuff. It's very insightful that you call this the best experience to date. No wonder! The route is yours, the (funny) mistakes are yours, the (funnier) solutions are yours, you prove you can handle self-made difficulties: YES it feels good. Much more effect than a day of blue skies and a group of walkers.

Good effort in the dark on Meall na Leitreach. I've done this late in the day in winter too, descending in the dark. Main difference was that it was clear!

I also enjoyed Graeme's report (and Kev's as well I think), so you can expect another report from this part of the world in the near future

Quality Dave! Absolute quality! Glad you enjoyed it, even if you did get even poorer visibility than we did!

Looks like you set up in the first room of the bothy, not the bigger one next door with the wooden floor? Great excuse to go back now as well, to claim the wee Graham. And a cracking wee Graham it is too.

davetherave wrote:I was in new territory….. On my own, navigating at night and in the middle of winter “ I must be mad “. I was feeling excited and confident; I was really starting to enjoy myself.

This quote just sums it up for me!

Wilson's face says it all - "you are mad".
Great stuff. I love Wilson.

Cracking report, Dave. I really enjoyed reading that. You did well navigating in virtually zero visibility and in what must have been white-out conditions, not to mention darkness on day 1!

I love the photos of Wilson. He's got that "I'll stay here by the fire while you go do Beinn Mholach, and you can pick me up on the way back" look about him ...

Great report, really enjoyed it - don't think Wilson could get much closer to the fire could he

That put a smile on my face.

Well done on what seemed like a mini adventure - your skills have improved no doubt.

Interesting what you say about trying to keep your feet dry in the dark. This is my problem with night walking off-track. If I go in knee deep at this time of year, my boots aren't drying for a week

. My last 2 excursions have finished in the dark but both times I've been on minor roads or farm tracks (intentionally).

. I'm really going to have to dust the tent off this year, but I've been saying that the last 3 years ...