Having planned a week in Kintail, the Five Sisters was the one walk we knew we had to have a go at. This would be one of biggest ever walking days - certainly in terms of cumulative height gain, so we approached it with some trepidation!

Following a fab, sunny week in the lake district with my sister, we had a 6 hour drive from Coniston to Kintail, and should have arrived at our cottage by around 6 o clock. Unfortunately the traffic was against us and we queued for 1 hour at Loch Lomond and then had to turn around halfway up the A87 just before Glen Coe, adding +3 hours our journey. All in all we arrived exhausted, late on Saturday - and found the only decent weather window for the week, was tomorrow! So with little sleep, and shell shocked from the drive the day before, we woke early Sunday morning, and to our surprise, were the first to arrive at the car park at 840!

You need to move a tiny bit down the road to start the path, and then you do turn up just past the corner of the forest - wait for the cairn! The ascent was brutal, but we must have been primed from the previous weeks’ walking, and were pleased to reach the ridge by 1015! It being early autumn, the morning light was beautiful at this time, and we pressed straight on - deciding a change in gradient was as good as a rest (lol). 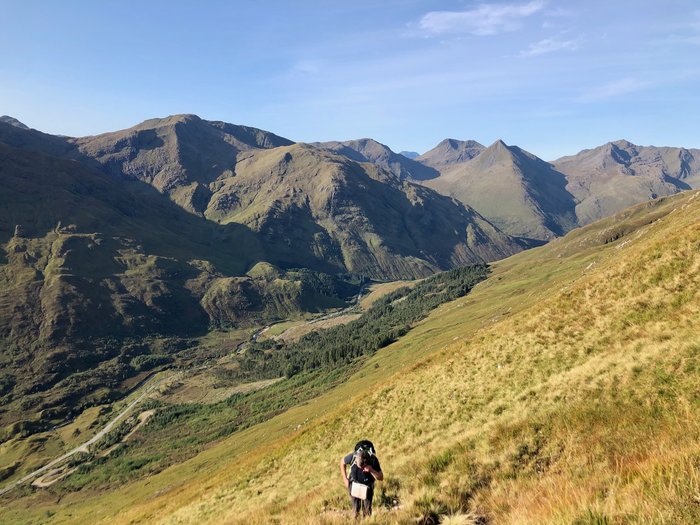 Reaching the ridge - where are we? First view of the sisters

We reached Scurr nan Spaintech by 11, which at 990 I couldn’t believe wasn’t the first sister, and descended to the col via a mini scramble. Based off a previous walk report (sorry can’t remember who to thank!), we veered right, and were able to get down without any issues.

Pressing on, we reached the first sister (and munro!) for an early first lunch by 1140. It was a lovely sunny day which made for wonderful views, but meant height gain was hard going! Luckily I was encouraged to move by the couple coming up fast behind us - nothing like a bit of peer pressure to keep up the momentum!

Aware we had several peaks to go, we kept going over sister no. 2. It was very bouldery but we progressed quicker than expected. And finally sister 3, the biggun, was in our sights. The North facing ridge off sister no. 2 was quite slippery and mossy, so we slowed to take our time.

The views at every point of this ridge were spectacular. And there is so much variability to enjoy. Can’t believe how many mountains there are here to tackle! The slog up to sister no. 3 looked long, but the path wasn’t too steep so we were at the top by 1340. After a longish second lunch, we got going onto sister no. 4, enjoying the sharpness of the ridge in this section (it looks much more fierce from a distance than in reality). Coming off sister no. 4 we were subjected to a midgie attack, causing some of our party to debate pressing on to number 5 (haha!). However these midges were landing, but were slow to bite, so causing annoyance but not actually painful (is this an end of the season slowness thing?!). Anyway after enacting our vengeance, killing at least 20 or so (take that midgy population), we got on to no. 5. At this point we were tired, and missing the ridge, as the mountain here broadens out considerably. It was only my Dad’s voice in my head “what, you didn’t do all of them?!” that carried me over to the fifth sister. And actually you then have a very nice view of the previous 4 behind you. Sister no. 5 by 440! Once off the ridge, the path down to the main road was very boggy and the midgy onslaught continued. However it improves, as you hit the deer stalker path and we hit our stride with a desperate walk / jog / stumble (!), keen to get under the 10 hour mark for the full ridge.

Hitting the village at the end of the path, we had very tired feet, legs and frankly, chafing all round. To our extreme gratefulness our host picked us up somewhere along the road, saving us the 1km back along to the kintail hotel - and giving us a final time of 9h45. What a day!

Great report. Done them a number of years ago. Fantastic mountains and views.

R1ggered wrote:Great report. Done them a number of years ago. Fantastic mountains and views.

Thank you! They are indeed great mountains, might be some of my favourites.

Beautiful view i have done this in the mist and ice