This is a record of all the local walks I did during between 29th March and 8th July 2020. This fifteen week stretch is approximately the period of Lockdown which started on 23rd March and ended on 3rd July when the 5 mile limit in Scotland ended and we were free to travel further afield.

Despite living in Kirkliston for over 40 years I’d never done much local walking preferring to chase Munroes and more recently Donalds and Marilyns. Lockdown led me to start exploring just what was available. I started along obvious routes, supplemented by others suggested by neighbours and my cousin who hadn’t done much walking before, but soon caught the bug. She was out most days, and told me about routes suggested by her friends. I in turn tried them out, and reported back to her on what I discovered. The map is a record of all the walks (except Scald Law) that I did during the lockdown months. Most were done more than once, some more than a dozen times.

The Three Tumps
If you search the lists of Scottish Hills you won’t find any within walking distance of Kirkliston until you lower your sights to the Tumps: hills with a 30m elevation above their surroundings. There are three within 4km of Kirkliston and another three on the far side of the A90 near the Firth of Forth that will be available for the next lockdown period. The nearest Tump – Dundas Hill – could be reached in just over half an hour and the main problem with it was deciding which particular minor undulation was the highest. The solution was to visit them all! 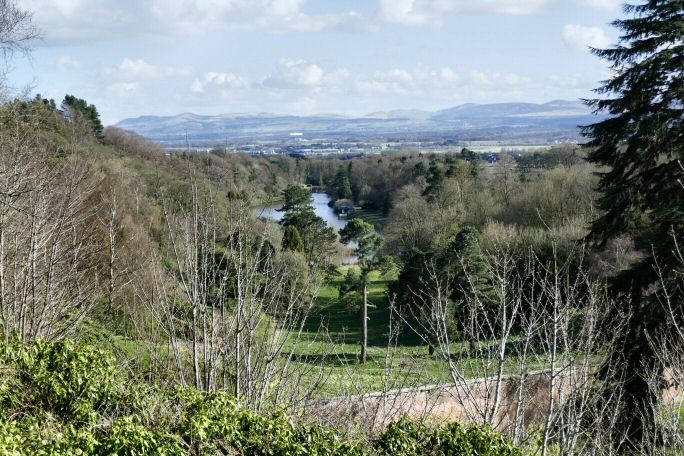 As I descended back to the usual public walking route I saw a sign implying that area was out of bounds. On another day I made a repeat visit to Craigie Hill. I’d been there many times before by car. This was further than Dundas Hill and I made the walk into a circuit by first heading down the road to the northern bank of the River Almond then along it, under the railway bridge then through fields to the familiar paths through the woodland and Craigie Quarry with its warning notices. 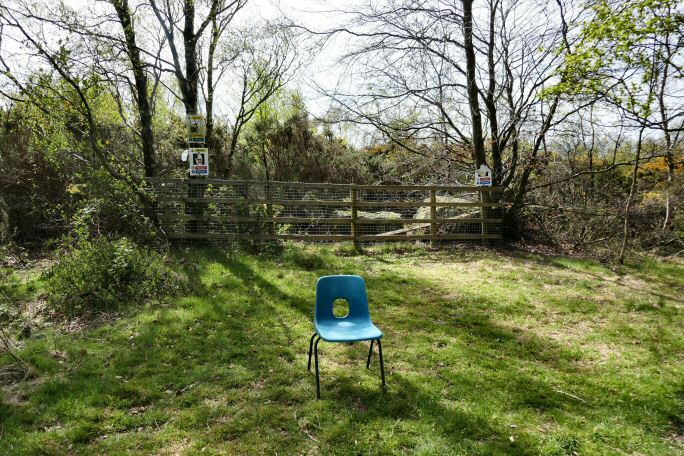 At the top the formerly obvious and well-worn paths through the gorse were becoming overgrown. I returned home past the Dalmeny Oil Depot and then along the old railway line. The third nearby Tump is artificial being the result of shale mining forming a bing which more recently was excavated to form an embankment around Dalmeny Oil Depot. The depot is surrounded in turn by a high metal fence preventing access which is no doubt backed up by intruder alarms, CCTV and 24/7 security guards. I’d read the reports so copied what others had done and visited the nearest high spot - a bus stop on the adjacent A90. I also visited a broken concrete slab in the middle of Dalmeny village which covers a shaft down to an old tunnel where the shale from the mine at South Queensferry was brought under the centre of the village to the oil works where the Oil Depot now sits. 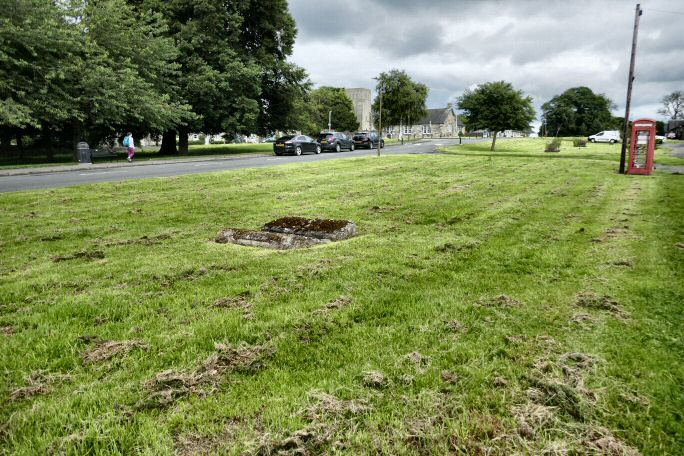 From there I continued on to South Queensferry to pay a suitably distanced garden visit to a friend there before returning home along the old railway line.

Scald Law - Charging my Battery!
A recommendation arrived from Toyota that motorists should run their car’s engine for an hour every so often to keep the battery charged up. I’d been restricting my driving to visiting the local shopping centre once every week or two. I took that message as giving me permission to drive further, and after about half an hour I found myself doing a U-turn into a lay-by on the A702. There were another couple of vehicles there and, as it happens, the gate at the foot of the track up Scald Law I’d used in March (see ‘Scald Law before the Lockdown’ - 22/3/2020) So I repeated the route I’d done then. I saw several small groups of walkers in the distance and one runner coming from South Black Hill as I neared it. We passed at a separation of five metres, the closest I got to anyone that day.

Paths less travelled – to Cammo and back
I had heard that it should be possible to walk from Kirkliston to Cammo and back along the banks of the Almond. My first attempt along the south bank from Boathouse Bridge ended in impenetrable vegetation. Next time I found that I should at that point have back-tracked a short distance, headed for the airport fence, and walked beside it to where a culverted Gogar Burn emerges from under the airport. 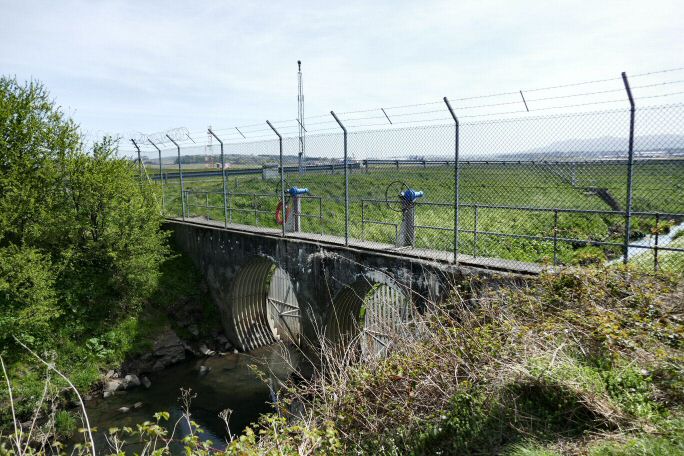 The Gorgie Burn and the fence around Edinburgh Airport

In dry weather it is possible to easily cross dry-shod from one stone to another. After modest rain some have an inch or two of water over them. I’ve not been there after heavy rain. 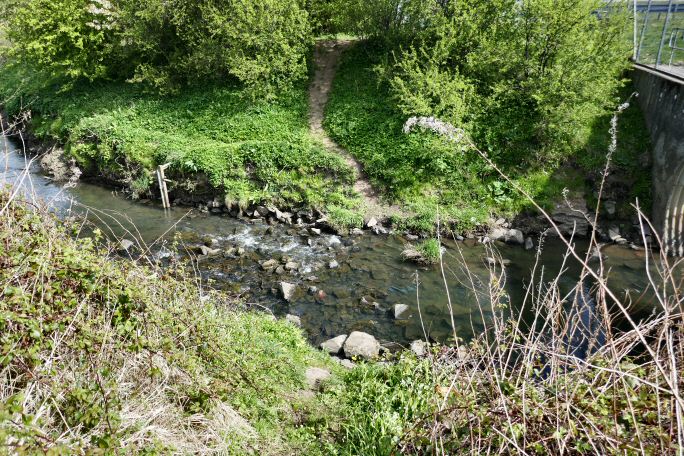 Once over the burn a short spell beside the airport fence arrives at a track that heads under the railway bridge and either along the bank of the Almond all the way to Grotto Bridge or you can choose a flatter, wider and potentially sunnier route round the edge of the adjacent fields. 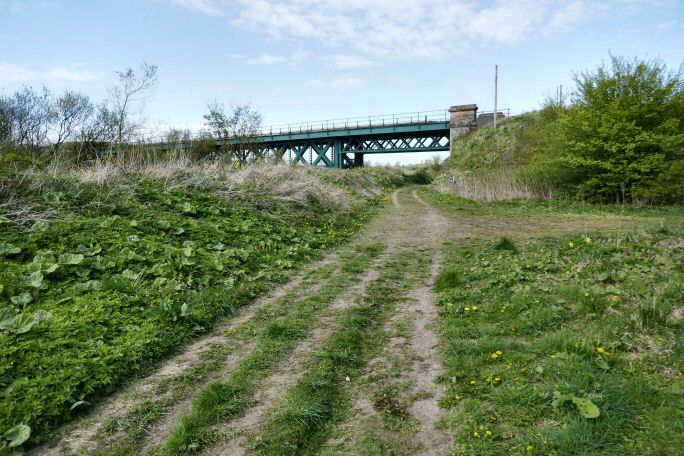 Heading east beside the Almond and nearing the railway bridge

The north bank route is the far less travelled part of the round trip. From just before Boathouse Bridge I took the minor road heading east. Where it turns left a signpost at the field gate points to a footpath along the bank. In April this was an obvious and clear route all the way to and under the same railway bridge mentioned above. 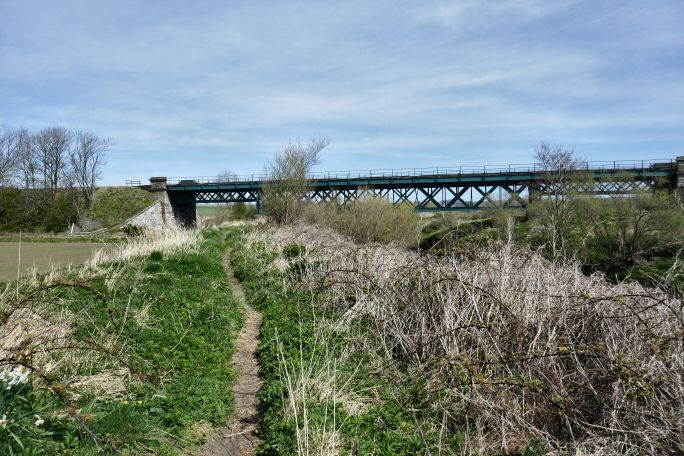 A short distance after that a track heads left and is the route I later used to reach Craigie Hill. The path along the bank does continue but was much overgrown so when I returned later I brought secateurs and pruned my way through the brambles and shrubbery for about 400m. At that point I was on top of the banking and realised why the route near the water was so overgrown. There was a much better and clearer route along the edge of the field! That then climbed the bank and I continued along it to navigate through the next section of woodland and past the Army base to cross a meadow and then follow a road to Grotto Bridge. I crossed it and returned to Kirkliston along the now well-known south bank.

This was done in April and I repeated the 14km round trip a few times over the next couple of months meeting a total of five walkers and a dog on the north bank in contrast to the several score along the south. That difference in footfall showed because by the end of June, summer growth had totally hidden the beaten path along several sections of the north bank while the south bank path was still obvious all the way. 
Rear view mirrors required
Many of the routes I covered were also used by cyclists, and while most made their presence known either by bell, a call or tyre noise, a few shot past with no warning. This was most likely on downhill sections of smooth pavement. Collisions were avoided, but there were a couple of close encounters. Pavements and roads were the most popular for cyclists with dismantled railway lines equally busy though narrower. Most of the other routes along river banks and through woodland with their narrower paths were almost exclusively the preserve of walkers. 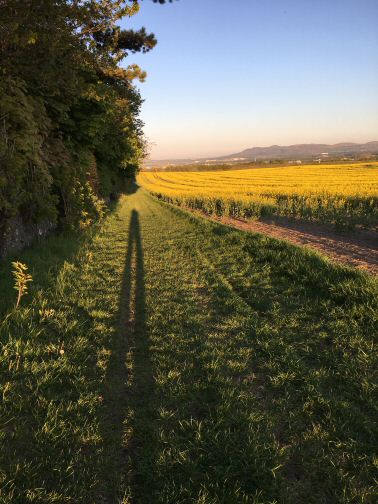 Animal Life
Many of my walks included Dundas Loch and Pikes Pool both with an ever changing population of bird life. One constant was a resident pair of swans at both. The Dundas pair initially had five cygnets but the female died in late June and the number of cygnets is now down to three in July. 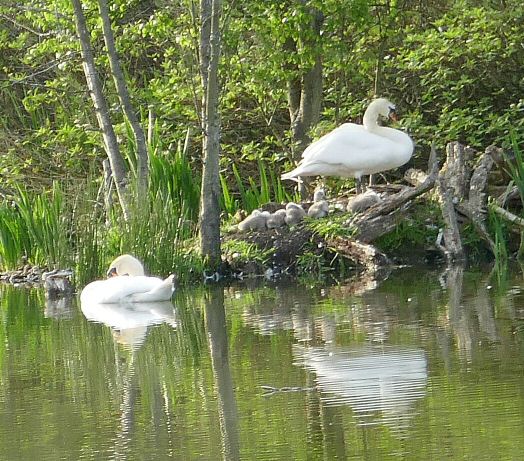 Dundas swans and cygnets at their nest in May

The Pikes Pool pair also had five and still have four. It was educational to see just how aggressively both males chased other species on their water. 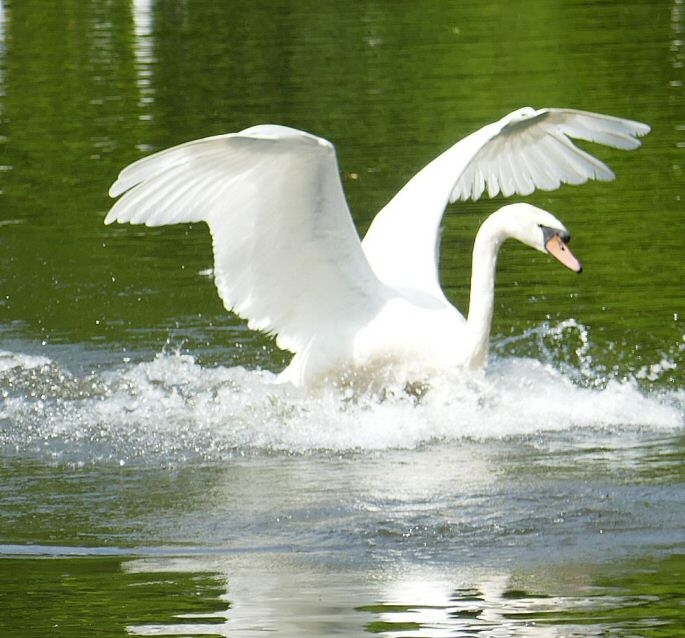 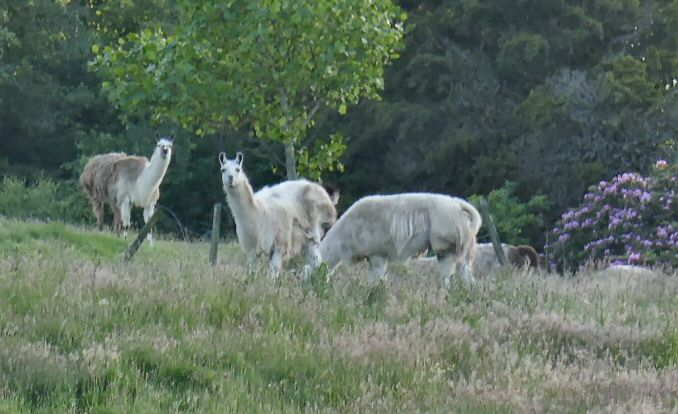 Statistics
Over the 102 days from the first to the last walk included in the stats I walked on 79 days, all but one from my house. It was a remarkably long period of mostly good weather and I grew to trust the Met Office's short-term weather forecasts. On the rainy days choosing the periods predicted to be driest definitely worked for me. Only once was I caught in a short shower which lasted only a couple of minutes. The forecast had the probability of rain at <5%, but since I was on one of my longer walks – to Grotto Bridge and back, I had a jacket with me. Usually I didn’t bother taking one when the forecast was that good and on all the occasions I did take one I usually ended up carrying it over my shoulder the whole way.

Future Plans
Having thoroughly explored a number of routes I do still have those three less local Tumps to visit, and there must be other routes towards Winchburgh in the west waiting for me if (or when?) another period of lockdown is imposed.

This is a great report - thans for sharing. I am definitely going to have a look at the north bank of the Almond path before the vegetation rises.