We were staying in Ardgayhill so decided to walk from the door to Carn Salachaidh. We weren't familiar with local paths, so it was a grand opportunity for exploration. We started by going up to Oldtown and taking an attractive forest track to Badvoon. There was a poor section of route here, with a rickety tied-up overgrown small gate to clamber over, a weak bridge to be crossed one at a time, and then a difficult to follow path through the Badvoon grounds - one section had trees planted on it. After a while we came out onto a track which replaced the rest of the original footpath, and had a newish highlandcouncil path sign pointing back into the jungle that we were emerging from. We followed forest tracks in a convoluted way through the forest and came out on the track coming up from Gledfield - it would have been quite a bit quicker to cut across open ground to avoid some of the twists but I was keen to avoid climbing any deer fences, and thought that it would be safer to stay on the track. It turned out that there weren't any deer fences where the forest meets the moorland.
It was really hot going up the track to the end of the ridge that we planned to follow, but there was more of a breeze later. This 'ridge' is really several disjointed knolls, but it was all straightforward, with excellent views of Carn Chuinneag and of our penultimate knoll, Carn Bhrain. 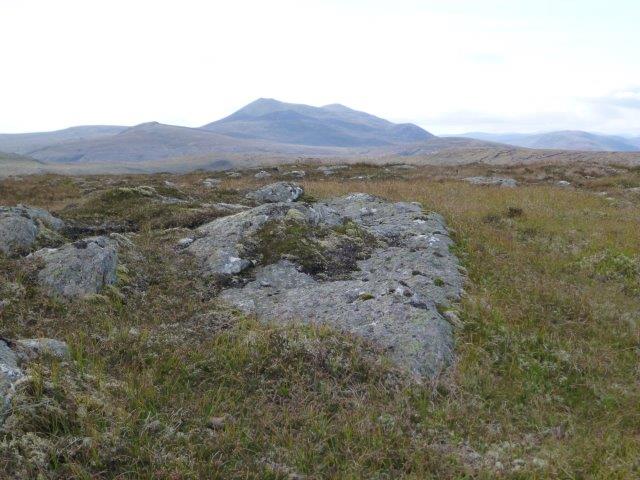 This completes our pictures of Carn Chuinneag this summer, from almost every nearby Graham From Carn Bhrain we had good views down the Kyle of Sutherland, whereas the main summit gave better views of the hills to the west and north. The summit contains a trig point but the highest point is on top of a large rocky outcrop nearby. This is easily ascended on a gentle slope until the very last bit, where there is a wide deep chasm, quite unsuitable for people with no bounce in their knees. The summit trig point and the summit rock 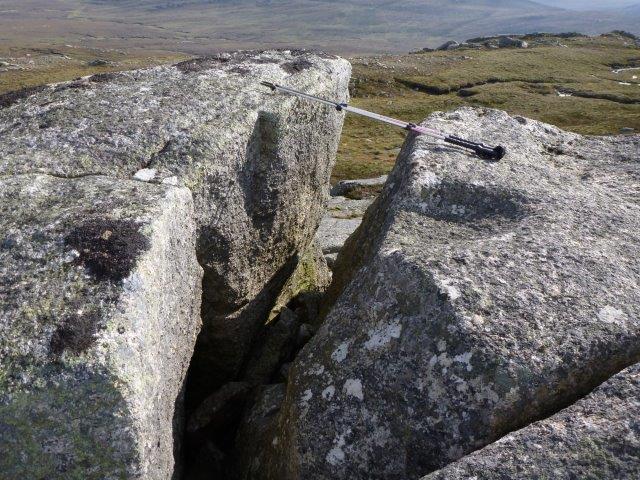 The summit cleft, with men's walking poles at their longest extension

The Hare said it was actually alright to step over, but I didn't fancy it. Had I come all this way just to be thwarted at the last step? I retreated and found another possible route up the side, and scrambled/crawled up, patted the top and made a rather undignified retreat. Later the Hare said that as the highest point was actually detached from the main rock, it was possibly a large boulder and might not count as the true top. But by then we had left the summit and I could not go back and check.
We were concerned about the time, and decided to head back to the lower section of the track directly instead of going over the bumps on the ridge and the over the hill on the track. This cross country route worked well until the end, when the ground got a bit rougher and we were getting tired. We had been heading for a lochan but for a long time it didn't seem to get much nearer! Not sure if it was quicker to do this than going over the ridge again - it was more direct and cut down on a long track walk. Then down the track to Lower Gledfield and back up the hill to the cottage.
Here is our approximate route