We chose this route partly because we were staying nearby at Cannich, but also because it gives a route with less wind turbines, We parked at the Corrimony cairn carpark and cycled through Corrimony and up through the bird reserve (no birds but pleasant), and past the loch. We left the bikes hidden in woodland shortly before the new bridge where there had been a ford, because the next bit looked rather steep and long, and we thought we might wear ourselves out going up. We did meet another bagger on the summit who had cycled all the way to Loch ma Stac, but he had younger legs and a bike with front suspension.
The wide track continued uphill towards a set of 5 turbines. As the ground levelled off, we turned off onto old track, which was good as far as a dam. After that there is a section not on the map but clear on the ground, with boggy and improved sections, and a digger blocking the way at one point.
We arrived at Loch ma Stack with its old Victorian hunting Lodge, now without door and only just intact, just in time for lunch. 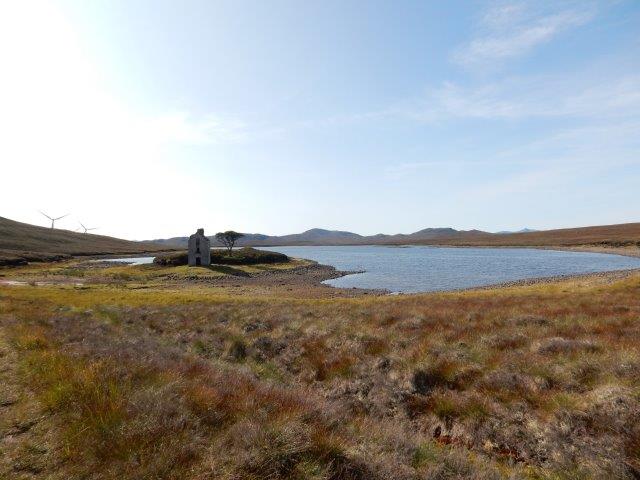 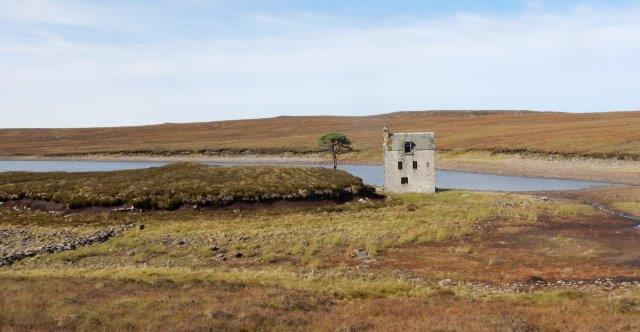 After that it was a straightforward walk up across to the ridge and along to the summit. Looking back on the ascent

I headed towards the ridge whereas the Hare went over 632, but this meant he had a close encounter with the outliers of the massive turbine installation, so far unseen. From the summit there were splendid views all round of the hills except to the turbines in the SE. Trying to take a picture between blade rotations - success Not quite without blades

After admiring the views, we angled cross country down to the track and returned to the bikes, it was a good ride back, downhill after the first bit, and nice to vary walking and cycling on the track.
Here is our approximate route.