A very long ridge walk - from Threlkeld to Ambleside

A very long ridge walk - from Threlkeld to Ambleside


With a bank holiday weekend with the rels looming, we decided to squeeze in a wild camp the night before and arrive in style: hot, sweaty, and over burdened with all our belongings via the long ridge from Threlkeld, over Helvellyn and Fairfield into Ambleside. I wasn’t exactly sure how achievable this would be within our fitness levels, and anticipated with heavy packs it might be quite a challenge - but anything’s worth a go once right?!

We finished work early on Friday and having being unsuccessful in finding a campsite that would take us for 1 night on the bank holiday, decided to wild camp at the start of our planned walk on the hillside of Clough Head. The 1657 train from Euston to Penrith due to arrive at 2009, was as you’d expect, delayed, meaning we just missed the crucial last X4 bus to Threlkeld. Noticing we weren’t the only ones in this predicament, we befriended a nice walker heading for a scrambling weekend, and shared a taxi, who rather ominously (although perfectly to our instruction!) dropped us off on the side of the A66, in the quiet rural countryside as dusk set in. Upon resetting our ruck sags we headed up the lane, now needing our phone lights to see the path, and after an hours’ surreal walking in the pitch black up the hill, began looking for an appropriate campsite on Threlkeld Knotts.

Our plan was to camp somewhere below the Old Coach Road, from which the path up White Pike and then Clough Head began. It was boggy and we only had a vague sense of exactly where we were on the map, but we found a small break in the heather, with not too much bog to put up the tent - hoping we weren’t camped right by a field of cows or killer sheep, or wolves?! In the eerie night, our imaginations had ran slightly wild! We slept well, and awoke around 630 to find our pitch made for a lovely sunrise view of Blencathra - what luck! We’d left the trangia at home to save weight so following a croissant and banana breakfast, we set off - caffeine levels at zero - to find the faint path heading up our first top via White Pike. 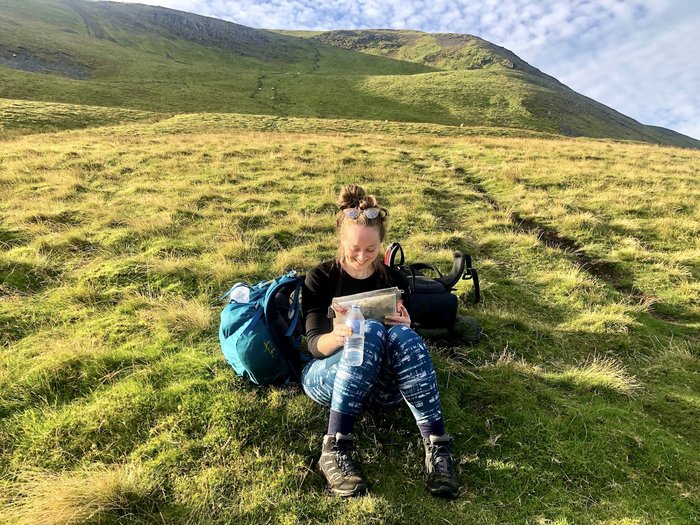 Checking on the route

Reaching the 726m top, it was exciting to see the North lakes stretch out around us, and we could see our next few summits to the South. Our plan was to follow the brow of the ridge, taking in as many tops as we deemed sensible, without the appetite for any major detours. It was fun picking off the first few peaks, we kept a steady pace and were in sight of Helvellyn by 1130! Here the height gains and drops were getting bigger and steeper, and we were really feeling the weight of our packs. So we were happy to reach Helvellyn summit, and then continue along the ridge to Dollywaggon Pike, down to Grisedale Tarn. Heading down to the tarn

At this point we had a potential escape route down to the A591, and a cry of help to a willing relative could have seen us in the car and driven across to Ambleside in no time! But we had some motivation left in us yet, and fearing any sarcastic remarks that may have arrived from crueller (joking ha!) members of the family, had we cut our trip short, we began a slow climb up to Fairfield, reaching our second highest peak of the day at 1630. The final section towards Ambleside

We could now almost see our final destination ahead, and had only the latter half of the horseshoe left to tackle. It was by now a beautiful, sunny afternoon, and here the path descends “easily” over High Pike, Low Pike down into the upper hills of Ambleside. But we were very, very tired at this point, and really struggling just to put one foot in front of the other. My Dad sensing ebbing levels of enthusiasm for this walk from my texts, offered to drive us the last kilometre - but having come this far, we both felt we had to finish this walk under our own steam! Instead he met us on foot, and with a fresh face and new conversation, provided the distraction from the sore legs we needed to get us finally down to our end point at 1830. What a day to remember! Several restorative golden ales and significant amounts of carbohydrate in the form of pizza were to follow.

Re: A very long ridge walk - from Threlkeld to Ambleside

Great route, especially on such a brilliant day. And a long one too with all the gear on your backs! Great to be able to start at one end, with a base at the other.
I can imagine that the beer(s) at the end tasted pretty good....

Re: A very long ridge walk - from Threlkeld to Ambleside

I did the same route the other way, Windermere to Threlkeld and stayed the night in Patterdale and finished at the White Horse below Blencathra.

Users browsing this forum: Owen b and 10 guests