Last week was filled with strange ups and downs in the head department. Covid on the rise, wedding plans put on ice, working on mums house move on top of a busy work week too. All contributing to feelings of anger, frustration and stress. By Saturday I had made a plan to head to Tyndrum on Sunday to meet Lynne for a Corbett doubler, Beinn a' Chaisteil and Beinn nam Fuaran but by dinner time Saturday, I was on the verge of pulling out... Just couldn't get in the zone.

Knowing that to cancel was prob the worst thing I could do and that this was precisely what I needed.. I pulled myself together and prepped lunch and bag for an early start. So glad I did. (but sitting here writing this at 5am shows its short lived lol)

With recent months showing the popular parking spots fill up fast and early, we planned to be parked up on the wee verge at the top of Auch Glen by 8am. This meant me scraping the car in the dark at 6 and heading off at 6:05am. Good timing to Callander to pick Lynne up and off again towards Tyndrum. 3rd.car on the verge just before 8am. Sorted. 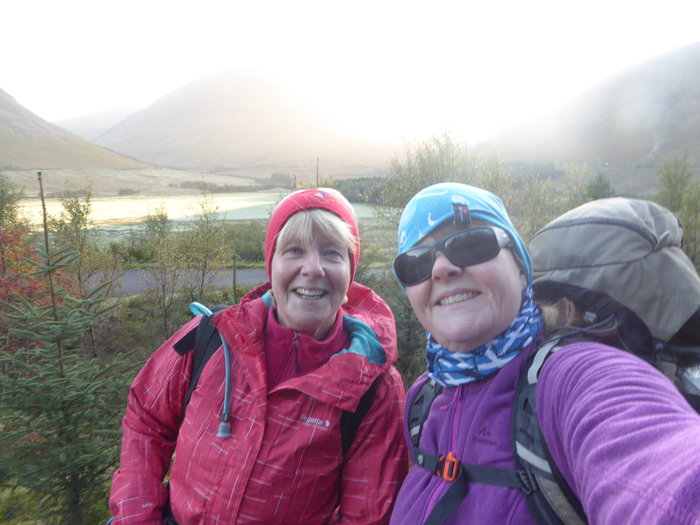 Heading off on a chilly, but sunny morning 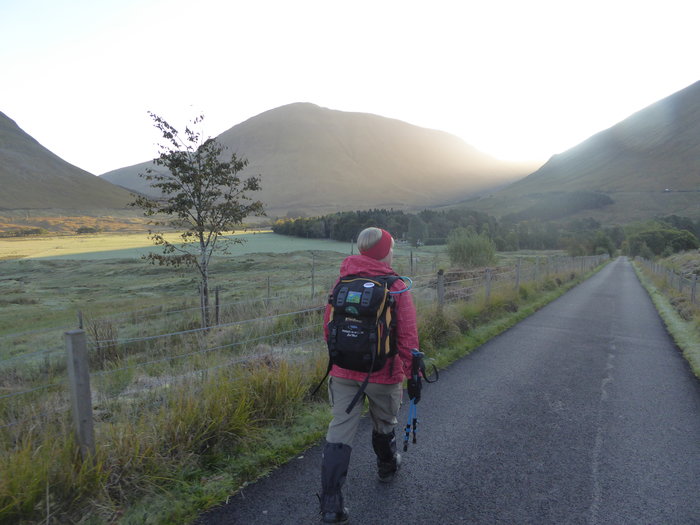 By now it was a gorgeous but cold morning, blue skies, whispy clouds and sunshine. The cold took me by surprise a bit but I had my extra fleece with me so just kept it on as we started our walk in. This has spurred me to sort out my winter woolies for the season, definitely not summer out there anymore

Following the Walk Highlands route, we passed down Auch Glen by the holiday lodges and farm buildings, seeing a chap sitting in a field waiting to take off on his paramotor,,,(had to look up what it was called lol) His windsock showed absolutely no breeze, nice to see. We waited a few moments to watch him run ahead, prop whirring, engine spluttering fumes before he coasted up up and away over Ben Dorain. Didn;t see or hear him again but his windsock had gone by the time we came down. 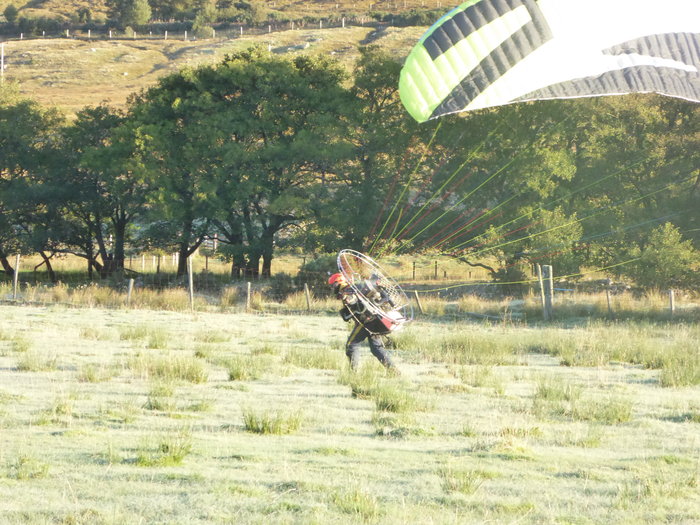 We could also see the work on the rail line under a landslip on the lower part of Dorain, I had heard about this last week at Corrour as trains couldn't get through and a bus replacement service running to/from Bridge of Orchy and Crianlarich I believe. This seems to be clear now as we saw a training heading that way as we headed back to the car later. 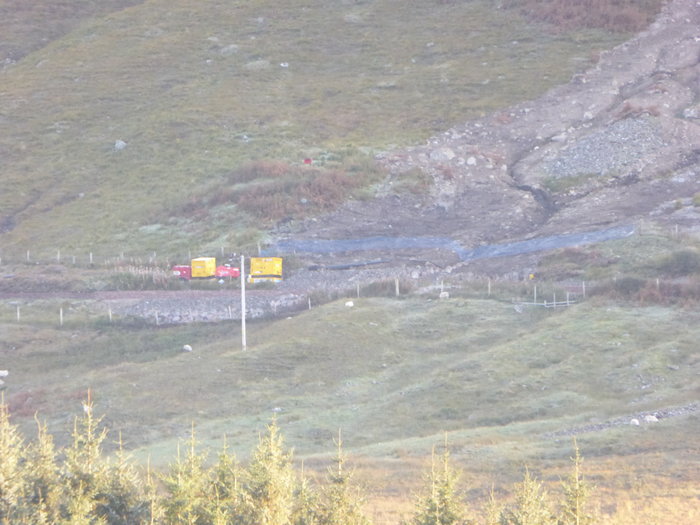 Train heading North on the viaduct in Auch Glen

Reaching the viaduct, we headed under, up and to the right, heading south east into Glen Coralan, we could see the track ahead winding along the lower slopes of Beinn an Chaisteil. At the point it started to descend, we looked ahead for the dam mentioned in the WH guide. Couldnt see it, but on turning round, there it was, down below us on the Allt Coralan at Eas nam Beatach, marked as a waterfall on the Explorer map.

Picked our departure point from the path and started climbing the steep sides of Chaisteil. Like pretty much all of the Corbetts in this range, STEEP STEEP STEEP. 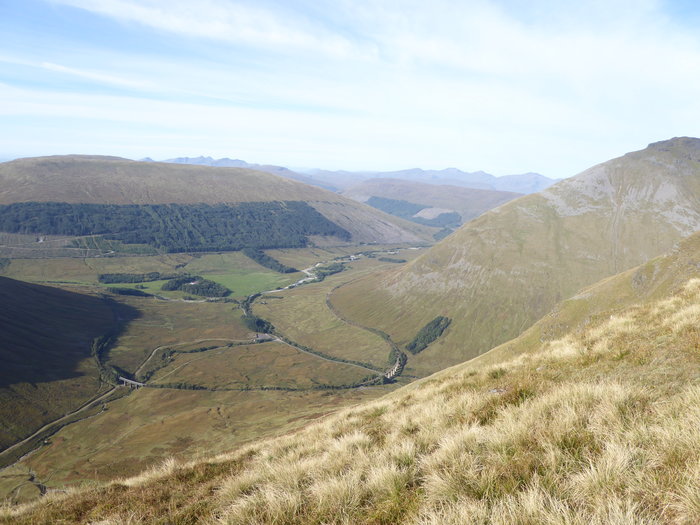 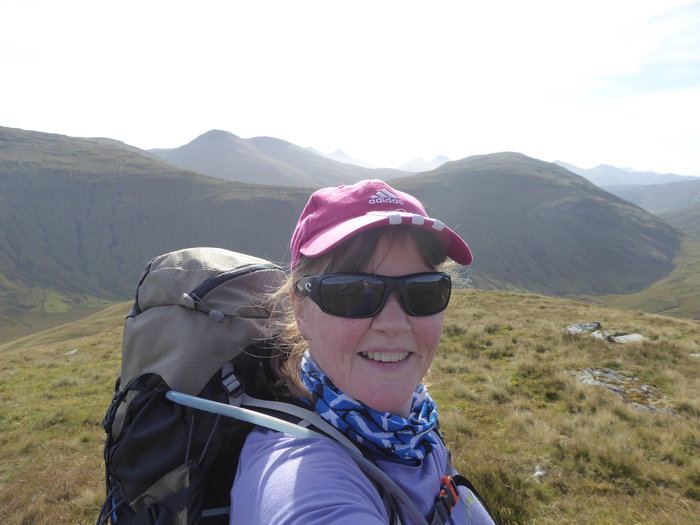 For some reason, lung power was a bit reduced today,,we both felt as though this was our first hill for ages (not true) but the steepness maybe caught us by surprise and we just picked our way up, stopping often for a breather and to take in the fabulous day,

As the gradient eased, we turned north west and picked up the fenceline heading up. The grassy slopes are easy to follow up above the crags and it was great when Lynne shouted she could see a trig,,,,,,,,,nope,,it was a fencepost and wasn't the summit either lol This was in fact, the top of the ridge above Coire Gaothach with the summit at the end of a left hand curve and now visible ahead. The hills beyond, Dothaidh, Achaladair and a' Chreachain and Ben Mhanach all very easy to pick out. Headed round to the summit, small pile of stones, arriving at 11:10am, Glorious day to sit and enjoy elevenses, Lynne had a dodgy flask of tea, it was a dodgy flask,,,im sure the tea itself was fine. But it hadn't kept the tea warm so by now it was tepid, another thing to bin for the housemove downsizing Lynne

Spent a lovely half hour here, not a soul in sight. 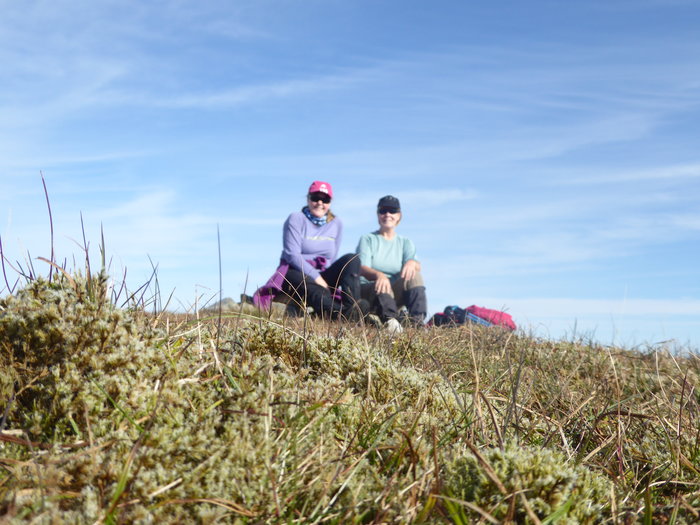 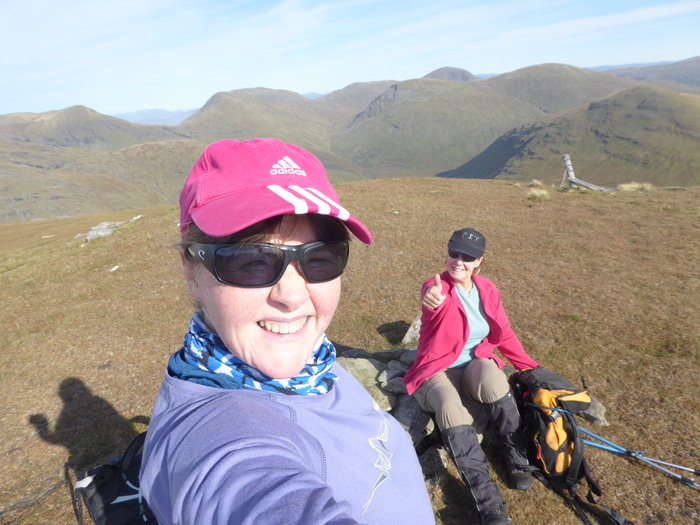 Aren't we a right colourful pair

On arriving at the summit of Chaisteil, we had looked over to nam Fuaran, neither of us had quite anticipated the drop and re-ascent required to reach it aarrrggghhhhhhhh

you lose some 300mtrs here then gain most of it again in a very short distance, so more STEEEEEEEP, 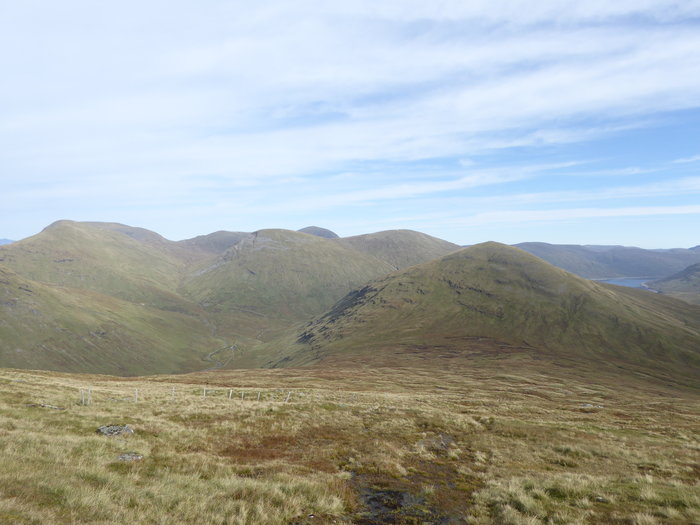 Looking across to nam Fuaran and the peat hags below,,and that ASCENT

The ground between the two hills is listed as boggy, and from up here, it looked like a massive peat hag infested slog. We just picked a line, roughly down the fenceline and made our way over some fairly wet ground. The recent dry spell certainly made this easer going than normal I would suspect. Only occasionally did we have to walk sideways a bit to find a narrower jump off point across standing water.

The fence line heads more left, straight across the bealach of Mam Lorn and straight up the front of the crags under nam Fuaran. Our line heads to the right to avoid those same crags but as before, this was longer and steeper than we had anticipated.

On checking the routes, I had considered a way of chopping off a few kms of the return leg, this would involve reaching nam Fuaran summit then retracing our steps to Mam Lorn and heading off down the side, north west, to reach the return track. The map showed it was steep, but no more so than we had already done, relatively short and not too rocky. We did discuss this from the summit of Chaisteil but opted to check out the lay of the land etc as we crossed over.

We actually made relatively good time on the way over and up, reaching the equally small pile of stones on the summit of nam Fuaran at 1:05. Slightly shorter stop here, 20 mins,, food must be running low lol Lynne having a seat while I have a breather,,sorry,,photo opportunity lol 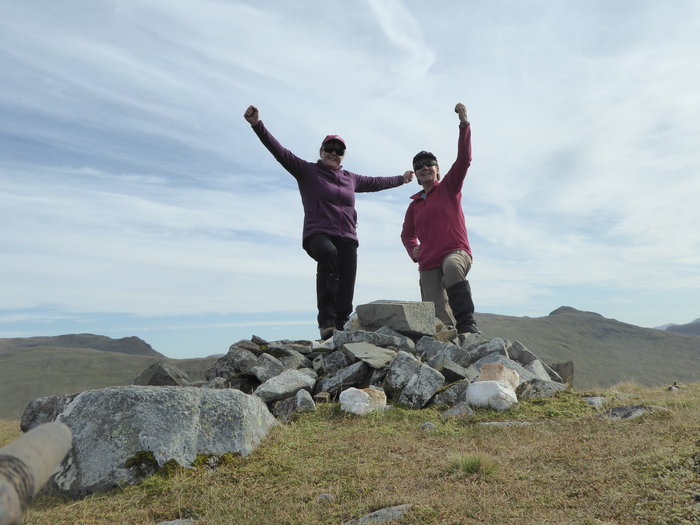 Made it to summit number 2

Once across the bumpy summit and seeing down, it didn't look as bad as anticipated. We also saw our first *other people* of the day, (paramotor man aside) Down on the track above Srath Tarabhan where the climb to Mhanach starts, 1 guy heading off down the track we would be taking, another 2 started to climb Mhanach, it was still only just after 2pm so plenty time (felt later, must have been the autumn light) 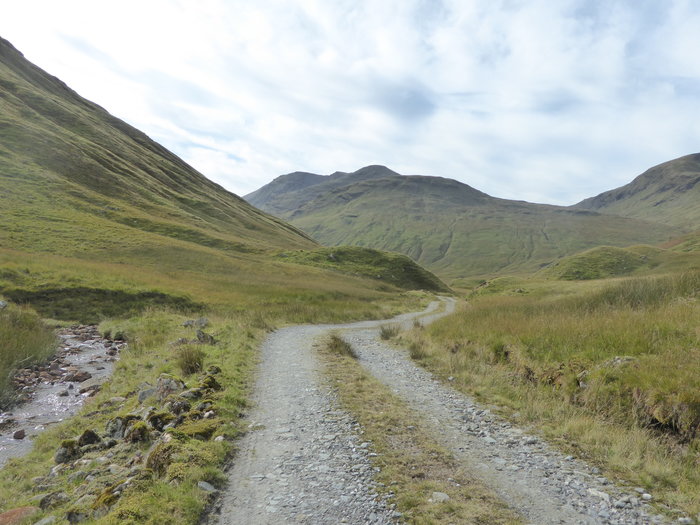 Back down and the long track out ahead

We got down a lot quicker than expected and reached the track about 2:10pm. My wee neuroma feet have niggled a bit on the hills recently, which is annoying as that was previously only a winter boot issue and hadn't been an issue in summer boots since I moved up a size to combat it. I normally maximise the foot space by using only the basic insole but since this niggled last week, I had changed to a sorbothane insole for today to see if that helped/ However, today, with a bit of twisting of the feet on steep descents, this had flared up again and i was actually struggling a bit. Both feet were burning but my right one was really painful. Limpy sore. The only short term solution i find with this is to cool it down and let the nerves settle, normally just by changing footwear and giving it a rest, With a long wander down the glen ahead, this wasn't really an option but the cool burn running past us was too tempting. We stopped at one of the fords, I dunked both feet while Lynne plied me with jelly babies, yum. Just a few foot numbing minutes was enough to reduce the inflammation, booted up and back off on the track.
(It did flare up again in the last 20 mins of the walk out but at least I was close to the car lol)

We passed through some young tree plantations either side of the road, definitely some birches in there but unsure on the others. 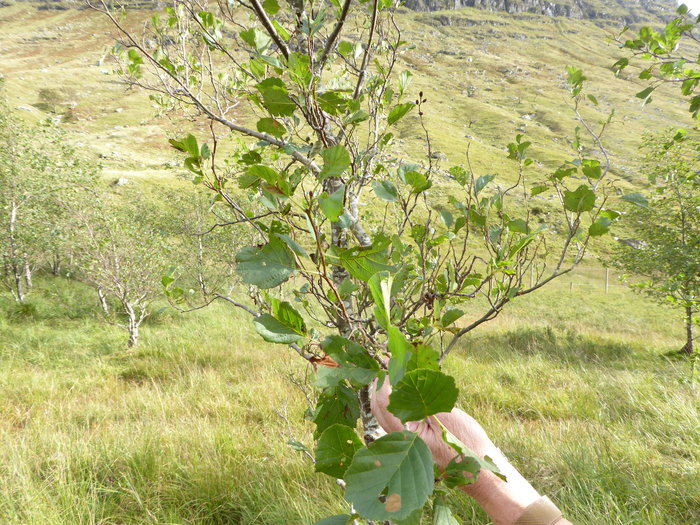 I had referenced this planting on my report on the Mhanach walk back in the 2013 heatwave, no pics so not sure what size these trees were 7 yrs ago. Lynne and I later checked as we realised we had both done Mhanach in July of that year before we knew each other, turns out it was only 2 days apart. 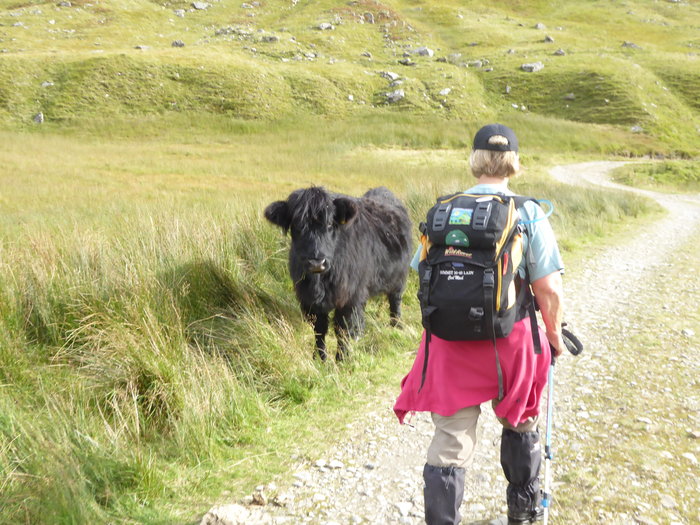 What you looking at???

We reached the car just after 4pm, 8 hrs with lots of quality stops, not bad.

The weather was great, cold and clear. I will be looking out the thermals etc, dont think we are too far away from needing these but thankful for a sunny dry day today. So good for the head and heart. I'm not doing a Corbett round,,but worryingly, I've already investigated the best return trip to complete the remaining 2 Corbetts in this group of 5 lol Be rude not to.