With free time scarce just now because of work commitments I was needing to get away from it all. Having not walked in well over a month and in dire need to lose the Christmas belly what better way than to head for Mount Battock. I had never done a solo walk before and with Andrea and my mates having other commitments I suppose it was about time I had.
Having parked up next to the phone box just past Millden Lodge I had a look at he map to see which way to attack this Corbett. I really liked the look of heading for Mount Een, Bennygray, up over Wester Cairn and then Mount Battock itself.
It had just past 11am when I set off. After passing by the Mill of Aucheen I headed for Blackcraigs. A nice, easy path at the start I feel always help as a warm up which this was on the ascent to Mount Een. The weather wasn't the best. Windy and cloudy but with no rain I suppose I couldn't complain. The path to Mount Een Looking back down towards Glen Esk The views started to open up to the south and the west the closer I got to Mount Een. With most of the path clear of snow I still had to be careful of the frozen puddles of water which a couple of times nearly falling over due to admiring the scenery. Braid Cairn with Mount Keen, somewhere behind the cloud

With a quick stop and a bite to eat I was off again. This time Wester Craig was the next point of call to which I could see the cairn on top. The weather was playing up by now. One minute I could have sworn it would rain come snow and then the next minute the sun was out. Good old Scottish weather I thought.
The path really started to get bad in places with snow and ice. Wish I had a pair of micro spikes but as long as I walked on the heather next to the path I managed. I think a pair of micro spikes will be my next purchase though as it did slow me down a bit. As I approached Wester Craig the path became non existent as the snow took over. I picked up some tracks in the snow and decided to follow them as they seemed to be going the right way. This lasted about 5minutes until the tracks started to go down hill to which I could see in the near distance a path appearing out of the snow. This was obvious the wrong path. Knowing that I was on the side of Wester Craig, getting to the top and taking a bearing from there should set me on the right course as the cloud started to fall around me. The only way was up then, cross country style..... 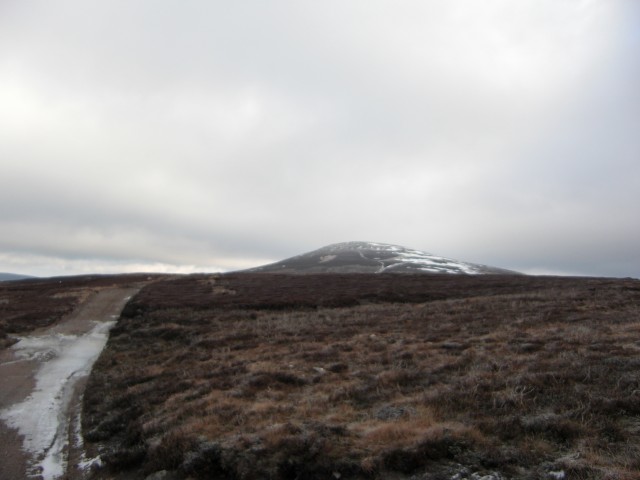 Footprints (and tire tracks) in the snow 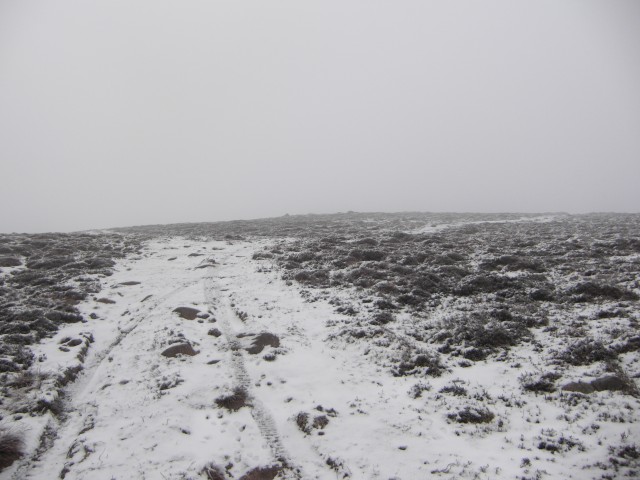 Looking towards the Hill of Saughs The top is somewhere!!!!

After reaching Wester Craig and getting a bearing I was off. The cloud had come down quiet fast and visibility was not good. About 10 minutes of walking later I could just make out a trig point and cairn as I approached the top of Mount Battock. The top is near After stopping for some lunch beside the cairn for shelter it was time to get going again. As quick as the cloud had surround me it start to lift. I was now able to see where I had walked from and a fence that I did not know was there came into sight. I remember thinking to myself it's just typical when you're making your way of the hills the sun comes out...... 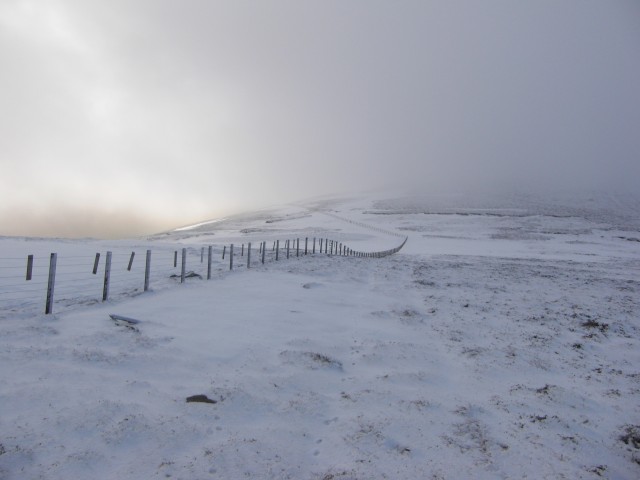 Things are starting to become clearer After following the fence for about a kilometre I could make out the path I had decided to take back to the car. I was going to take the path over the Hill of Saughs but just before I got to the summit of Mount Battock a met a lassie who had come from that direction saying that the paths were very icy that way. So with that in mind I decided to take the path that would take me down between Hill of Saugh and Allrey. A little over an hour had past since I had been on top eating my lunch with it hard to see 50 feet in front of you and with one last look at where I had come from, honestly this was about the only cloud left in the sky. I must admit that I really did enjoy my first solo walk up in the hills. Don't get me wrong, I did miss the chat, the laughs, the highs and lows you will have with a walking buddy but there was just something about being in the wilderness yourself. Just you and your thoughts for company. Probably my favourite picture of the day

neilfowlie wrote:I must admit that I really did enjoy my first solo walk up in the hills. Don't get me wrong, I did miss the chat, the laughs, the highs and lows you will have with a walking buddy but there was just something about being in the wilderness yourself. Just you and your thoughts for company.

Now you've started there'll be no stopping you. Can be a bit scary at times especially in cloud/whiteout but you get to go at your own pace with plenty of time to think - well done.

This hill can be a tricky one

Well done on your first solo

rockhopper wrote: Now you've started there'll be no stopping you. Can be a bit scary at times especially in cloud/whiteout but you get to go at your own pace with plenty of time to think - well done.

Yeah, I really enjoyed the solo walk and will hopefully get out this weekend again myself. Quite fancy Morven beside Ballater. It really did show me how easy it can be to get lost in a whiteout/cloudy situation. Before I took my bearing I tried guessing what way I needed to go and was quite a bit out. Just goes to show you there is nothing more important than your map and compass.