I'd walked round Loch Affric in beautiful weather the day before with a friend - the mountains had looked fantastically inviting, so I went back to Affric myself the following day to do the 3 munros of Carn Eige, Beinn Fhionnlaidh and Mam Sodhail as the weather was again forecast to be mild and sunny with cloud free summits. My intention when leaving the house was to do the Walk Highlands route, but it was a foggy start to the day, and all the way from Cannich to Affric was thick mist. Arriving at the walkers car park, visibility was terrible, so I decided to carry on and park at the car park right at the end of the public road (£2 fee) and walk along the north side of Loch Affric, the same start to the route I'd done the day before. I'd seen then that there was a clear track up Coire Leachavie towards Mam Sodhail, so thought it would be a good option in the clag. The forecast had been so positive about cloud free munros that I was pretty sure I was going to come out above the cloud once I'd gained some height even if it didn't clear on my walk along the loch side. It was warm and humid for the walk in, but still utterly viewless. The clear track, and then the branch up Coire Leachavie were good options for not getting lost or wandering off route. It didn't take much ascent to pop out into the sunshine with blue skies above and views up the corrie. The track became a path, then eventually faded out in the corrie bowl, but I knew I was heading to the headwall and came upon the zig zagging path up it. I'd drunk a fair bit of the 2 litres of water I'd set off with, so refilled at 1 or 2 of the numerous wee burns in the corrie to make sure I was starting the ridge part of the walk with the full 2 litres again. 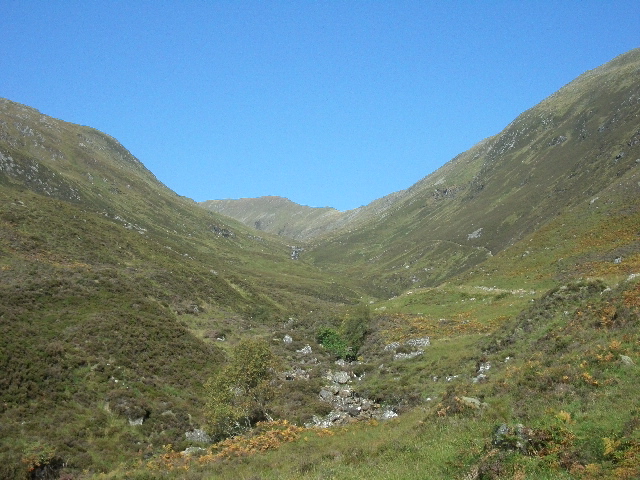 ...looking back down, I could see what I'd been walking in and why visibility had been rubbish! Getting into Coire Leachavie, the path seems to peter out, but just aim for the headwall straight ahead View back down from the top of the corrie headwall. The descent route (the ridge from Mam Sodhail to Sgurr na Lapaich) runs down on the left of this photo

It's a lovely feeling to reach the top of the zig zag path and come out within sight of Mam Sodhail's large summit cairn a short distance away. Didn't take me long to get up to it .... and it was at that point I realised the slight flaw in my last minute route decision; my originally intended route might have meant having to go over Carn Eige twice (unless I contoured round and bypassed the summit on the way back), but this ascent route meant I would definitely be coming back up to Mam Sodhail's summit a second time, in addition to the Carn Eige possibility. Oh well! Mam Sodhail summit cairn. Clouds still filling some of the nearby glens

The view of the ridgewalk to Carn Eige and Beinn Fhionnlaidh stretched before me, but really looked quite straightforward on a day like this. And so it proved. It didn't take much time to get to Carn Eige's summit from Mam Sodhail; met my first person of the day there, a guy doing the 5 munros rather than just these 3, certainly a good day for it. I'd expected Beinn Fhionnlaidh to look a lot further away given its description of remoteness, but it wasn't bad at all. And the extra distance was certainly worth it for the views it provided. With no-one else around and with stunning views in every direction, I spent a good 10 or 15 minutes there trying to identify mountains I'd done and mountains I'm still to get to (the nearby Mullardoch munros in the latter camp). 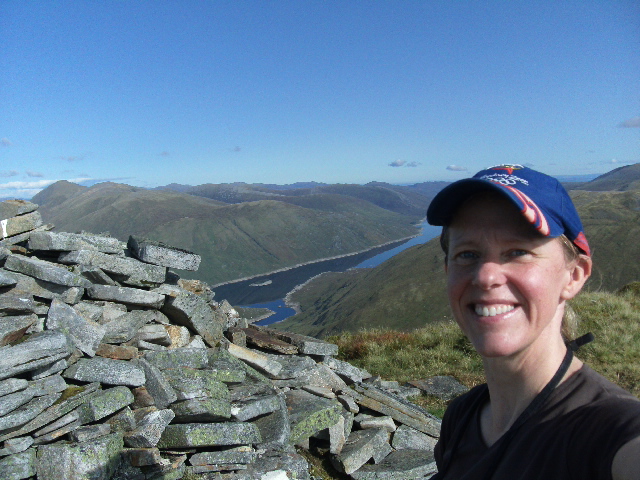 I headed back down the way I'd come, and back part of the way up Carn Eige, then contoured round rather than go back over the summit. Don't know whether that was the better option or not, I didn't find a path until right at the very end, so had just made my own way over patches of rocks and grass. Rejoining the path between Carn Eige and Mam Sodhail, I had a good view down the ridge to Sgurr na Lapaich, my intended descent route. The only thing that would change that would be if I'd run out of water, in which case I'd have headed back down the Coire Leachavie route to get back to water quickly ... but I still had half a litre left so decided that would do me, even in the warm weather. So back up to Mam Sodhail's summit cairn again, and then I started down the Sgurr na Lapaich ridge. View from col between Carn Eige and Mam Sodhail - looking down the way I'm going to head back, along this ridge to Sgurr na Lapaich Back at Mam Sodhail's summit, views over to Skye Setting off ESE down the ridge to Sgurr na Lapaich It seemed to take ages. It was a long day in warm weather with a lot of ascent, but I was surprised how tired my legs were starting to feel on what looked like a nice easy skip along the ridge. Fortunately I was more energetic for the last bit of ascent of the walk, going up to Sgurr na Lapaich, so could appreciate the view back to the mountains I'd done today. Heading down from there might be hard in bad weather; even in these clear conditions, I struggled to find the path through the rocks initially, but once on it, followed it down, getting nice views down on to Loch Affric. The descent from Sgurr na Lapaich was the worst part of the walk for me, I dislike steep descents at the best of times, let alone with tired legs and on increasingly muddy ground. I then lost any path again as I headed over to meet the track, and by this time I'd given up making too much effort to skirt round bogs and just stomped through them, heading for the track. I got on to it near the obvious bend and followed it all the way down to Affric Lodge and rejoined the first part my inward route along the track to the car park. A great day out in Affric, lovely conditions for a multi munro walk Re: 3 Affric munros via Coire Leachavie and Sgurr na Lapaich

Nice one and you got great views eventually.
I remember going over sgurr na lapaich 1st . Felt gubbed at that point

and still had the 3 munros to do. Great views in a beautiful area

Re: 3 Affric munros via Coire Leachavie and Sgurr na Lapaich

Mam Sodhail was my first Munro. Saw nothing due to cloud and nearly missed the cairn

The second time we went over SnL first, I remember moaning in my report "why is it not a Munro, it should be!". The reascent is 109m, I know Munros with less drop. It also feels like a separate mountain because the connecting ridge is so long.

We should have gone back to Glen Affric this year, but we were distracted by Torridon scrambles