Carn Toul.gpx Open full screen  NB: Walkhighlands is not responsible for the accuracy of gpx files in users posts
I had a week off work so with a gap in the weather forecast for Tuesday, I made the very very early trip to Glen Feshie having seen a report from dogplodder on doing these two from there.I was ready to go at 6:30am and set off along the road. I had looked at ways The sky was starting to brighten and by the time I had made it out of the forest on the excellent path, I was being treated to a colourful sunrise.

This continued all the way to the top of Carn Ban Mor and the crossroads where Sgor Gaoith lies to the left, Mullach Clach a'Blair is off to the left and Sgor an Lochan Uaine & Carn Toul are now visible off in the distance.

It was a bit chilly however there was not a drop of wind so I stood for a few seconds taking in the absolute silence around me. Then it was off down the very good track which heads for the Alt Sgairnich but promptly stops right before it in a T shape. A quick refill of water from the stream and I was off again thinking that I would probably head for Angel's Peak first. I got the head down and navigated the boggy area but bizarrely felt that no matter how hard I tried to gain some height,I kept getting pushed down towards the Allt Luineag. It was tough going and a relief to finally start climbing again although I was now heading for Carn Toul.

I traversed the hill in front of me and no matter how much I walked, it felt like the hill kept getting pulled away from me. The fleece was off by this point as the wind had vanished only to be replaced by direct sunlight so I was feeling the strain. A poor sleep and a god awful breakfast weren't helping either and it was with some relief that I started the last steep climb up the boulderfield. I quite enjoyed stepping up the rocks and four & a half hours after leaving the car, I was at the summit with my eyes feasting on the delight that is the view. The River Dee was far below me snaking its way South, Ben Macdui was across from me and numerous other mountains were now basking in the sun.

The relief at reaching the summit was immense and I sat in the summit cairn and got stuck in to some well deserved lunch. After a good rest I headed down and off to Angel's Peak which was reached in no time at all. As I walked on to the summit three guys appeared from the direction of Braeriach and it transpired they were running the 4000ft peaks that day. I only waited here for five minutes and then began the long walk back to the car.

The going underfoot was much better and I stuck tightly to the Clais Luineag as there was flat section which made for quick progress.I was feeling refreshed and moving along at a swift pace (with the odd stumble over a hidden rock) and before long I was making my way through the boggy area near Loch nan Cnapan. I had tried to break up the return journey by focusing on getting back to the T at the end of the track I had left earlier and 75 minutes after leaving Sgor nan Lochan Uaine, I had refilled my water at the same stream and was off up the track.

Regaining height at this point was making itself painfully obvious in my thighs but I got the head down and powered through it. Progress down the path from Carn Ban Mor was quick to say the least and the return journey to the car took 3 hours dead.

My feet and legs were making it abundantly clear that I had put a lot of effort in but it was worth it as not only were the weather and views perfect, I had finally made it to number 100. I'll need to return to Glen Feshie when I plan to head up Monadh Mor and Bein Bhrotain and I am very much looking forward to it. 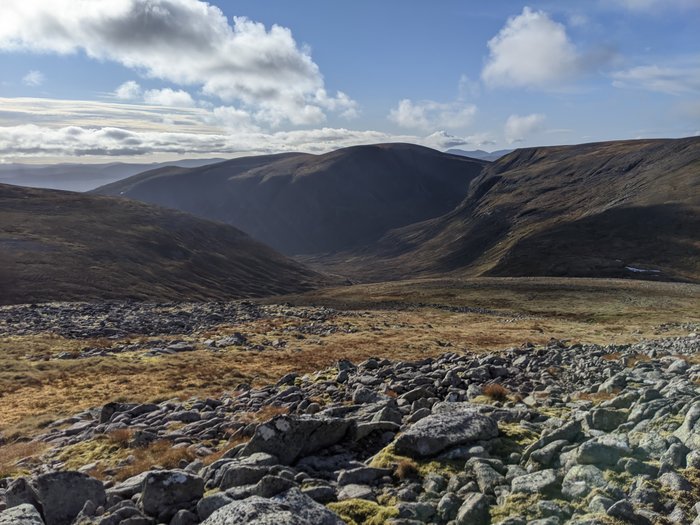 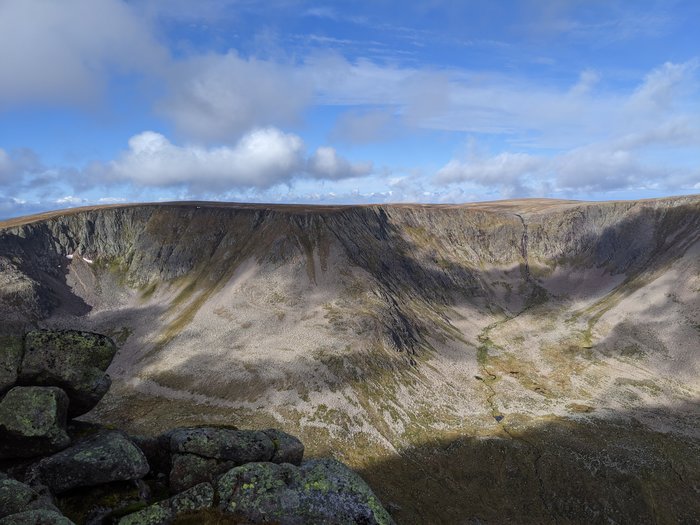 Stunning photos - especially the first one looking to the top of the Lairig Ghru and Carn a' Mhaim and the DP and the one over Cairn Toul to Bhrotain. Great stuff!

Cheers Graeme. Not bad for a phone camera but the light was perfect.