Forecast was good, my wife had other plans, so why not try the "other 3" on the Lawers Range. Having started hillwalking last July, we had conquered 7 munroes and a few lower hills in a couple of months. My first solo hike. Hamish the farmer whose farm I parked in, pointed out the first target - Meall Greigh... flippin heck that ascent looks steep... no word of that on Walkhighlands! The grassy ascent was steep in places and pretty relentless for this 62yo, I used my inhaler more on that incline than on all the previous 7 munroes. 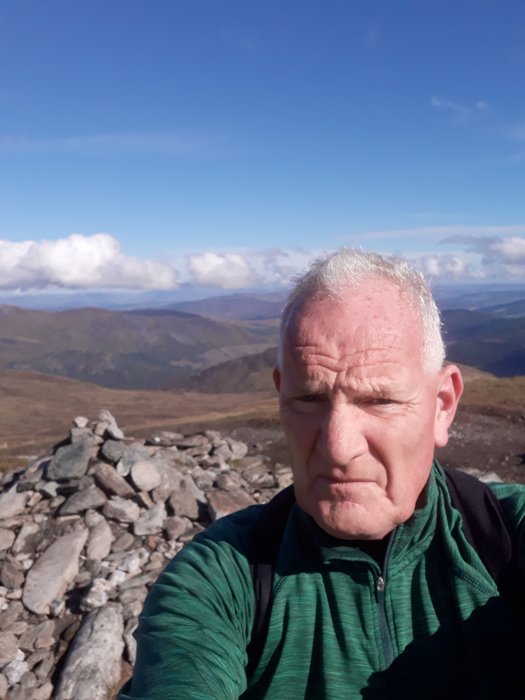 Made it, three flipping hours! But onwards, heading across the plateau to Meall Garbh was a nice stroll, but my leg muscles were beginning to complain... a lot! A couple of chats with firstly 2 couples - one of which was doing their first munro accompanied by a far more experienced couple (I hope they enjoyed the experience) Later at the bottom of Meall Garbh, another chat with a young guy, gave me encouragement to get on with it. Heading up the next incline it very quickly became obvious that I'd struggle to get up this one, never mind getting down again! My legs won the argument, and I slowly returned down from the hill.

Looking longingly at Meall Garbh and An Stuc, I was thinking they'll have to wait until next year. Just one last look at the incline that gave me so much trouble... Re: Failure on first solo on Meall Garbh

The benefit of this is you can now return for Meall Garbh with the experience you've already gained. For various reasons I've revisited hills normally done in a single day and reckon I've gained so much more from doing it that way.

Re: Failure on first solo on Meall Garbh

Hey, It is great that you are getting out into the mountains, so please do not see this as a failure, more a success that you reach the summit of 1 as each mountain we climb throws up their own challenges.

The mountains will still be there for next time, and you will enjoy the ones you didn't reach this time all the more for exactly that reason..