'And sometime make the time to drive out west' is the opening line of one of my favourite poems by Seamus Heaney. All summer I'd promised myself to do so 'in September or October, when the wind and the light are working off each other'.

Ben Stack is a wonderful hill when viewed from the A838. A shapely cone rising up and holding it's own amongst other famous names. My primary aim was to bag the trig but I knew a clear day would afford fine views in every direction so I kept an eye on the forecast to maximise my chances.

Ben Stack is part of the Duke of Westminster's land and an e-mail (to check there was no deer stalking planned) to his estate solicited a helpful and welcoming reply.

Leaving home was a bit of a shock at first. Already this far north the mornings are darkening more noticeably and as I made my way past Lairg the car warned of near-frost conditions. I was glad to be well packed.

Some of the tops had cloud lingering as daylight came in so I reckoned to pass some time and stretch the legs with an easy trig bag on Cnoc a'Ghriama. It turned out to be a tougher wee walk than the map suggested with rough brush on the steep slope to push through before gaining shorter but wetter terrain at the top. Still daylight was now well in and from this scarcely visited spot miles of open flow country revealed itself in that blue grey light of distance. Loch Shin stretched out its length and cloud still clung to Beinn Leod.

Parking just north of Achfary (well known place to many) the day was brightening by the minute. Arkle from here is a magnificent sight. Sadly I think for this solo rambler it may be beyond my scope but it must surely rank as one of Scotland's finest features.

I crossed the road and followed it south a very short distance to where a newish track led to a mast of some sort. Soon, I was past this, and a steady climb on a discernible path made it's way up with the views behind only improving: Loch More, Foinavon, Arkle. 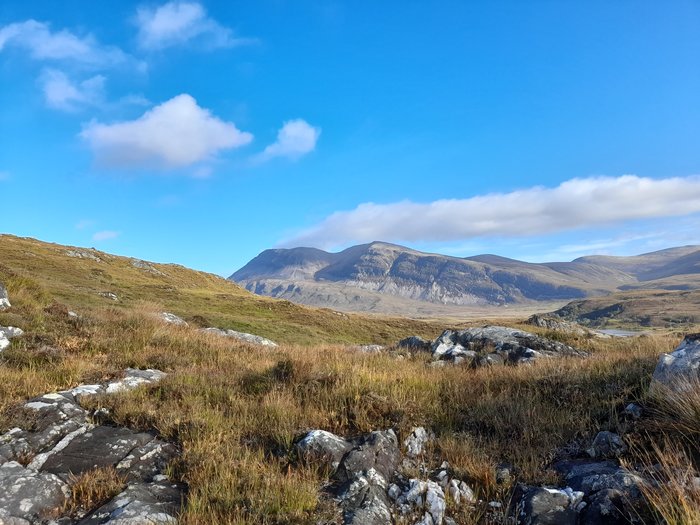 Eventually I reached a shoulder of sort from which the distinctive cone seemed to rise. Briefly I toyed with the idea of resting but feeling fit I pressed on following the footprints of my predecessors.

The cone is steep but not fearfully high. Two buzzards circled the summit, a cloud touched the sun. Soon I reached the top.

The top of Ben Stack splits along two ridges: one with the cairn, the other with the trig. I decided to visit the summit first. From here the views are superb and making my way past the comms mast I looked down upon a hard landscape of heather punctuated almost rhythmically by rocky outcrops. Loch Stack sat perfectly within the landscape of Arkle, Foinavon, Ben Hope beyond. There too, Ben Griam Mor and Ben Griam Beg, framed by higher, nearer slopes reminding me of the land beyond them that is home. Meanwhile out west the complication of sea lochs and islands could occupy the mind all afternoon. 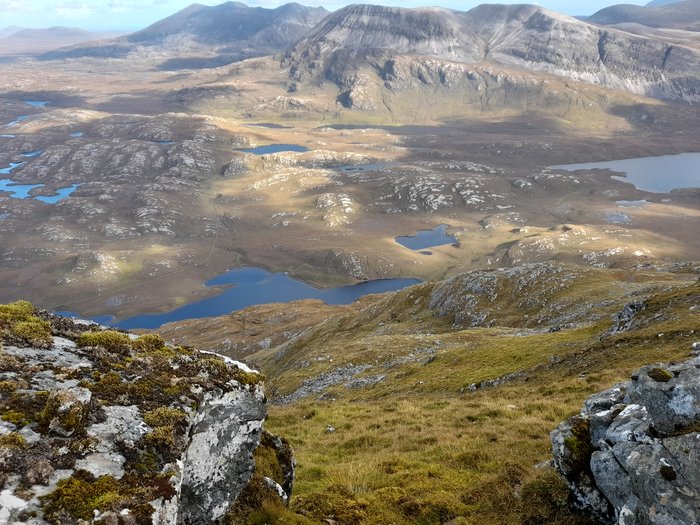 Beyond the cairn the ridge continues a short distance and as I walked out along it the sound of a car below entered the silence. I could see it moving like a beetle along the A838.

I made my way back and crossed the green space between the ridges towards the trig which stands inside a wind shelter. Here I had my lunch of jam piece and the last part of a birthday cake. I found myself thinking of Robin Cook who took fatally ill on these slopes. I remember his principled opposition to the Iraq War. 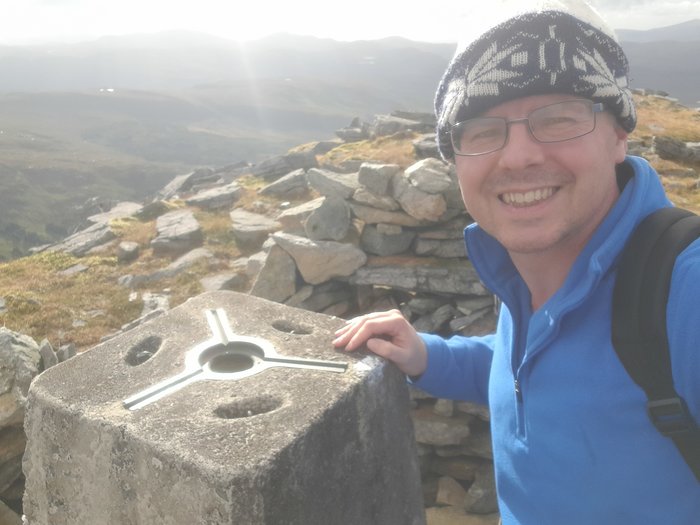 Eventually it was time to descend and I allowed the hill to lead me down, stopping only to photograph a half-white ptarmigan. A reminder there wont be many hills left this year for this amateur!

Reaching the car I checked the time: an unhurried 4 hours five minutes - I could hardly have spent them better.

It's a fantastic hill I think.
Four hours for Ben Stack would suggest Arkle would be fairly easy for you too I would have thought.