Leaving the car in the parking area, we took an atv track sloping up the hill past the forest. We chose to do the loop this way round because I was hoping to get an interesting cloud inversion above Loch Lomond. We kept on the track beyond the forest, it was heading uphill and a bit to the left. On the way up, looking back to Doune Hill

Eventually the track forked, we took the higher one which soon petered out leaving us heading towards a corner of a barbed wire fence. To avoid the barbed wire, we could have stayed on the lower fork, which must have led to a gate which we could see below us, just too far to return to. Once we were over the fence, it was just a short distance up and slightly right to get to the summit. I didn't get the cloud inversion I was hoping for, but it was all very atmospheric. 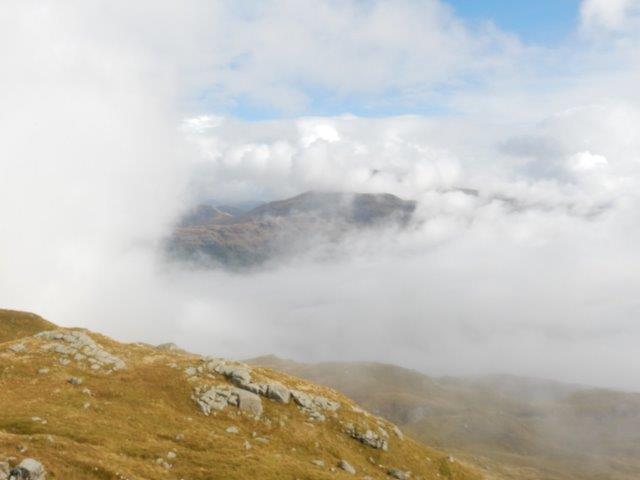 Failed attempt to get Ben Lomond with temperature inversion

We followed the ridge northwestwards, initially alongside a shiny new fence - but no barbed wire on this one. Looking back to the summit of Beinn Bheag When the fence blocked our way, we crossed it and worked our way up to point 632 and Ben Reoch, where we stopped for lunch. Towards the Luss Hills It was a steep grassy descent to the An t-Sreang and across another shiny new fence, The way up Tullich Hill had looked quite a pull, but in practice the angle of the slope was much easier than the descent just done, and we worked our way up past the crags. Eventually we decided to climb a knoll instead of skirting it, and there we were on the plateau at the top of the hill, with excellent views down to Arrochar and over to the Cobbler. Looking towards the Arrochar Alps Zoomed view from Tullich Hill to the Cobbler

Then we headed over to the summit and continued admiring the views.
On leaving the summit, a narrow path lead us down the ridge but disappeared from time to time. From research on the net, I had found that there was a stile in the deer fence at NS330000, and by heading just slightly left when the fence appeared, we found it without consulting the gps. I don't know if that was the only stile at the top, because we could see three below us and were not sure which one we should be heading for. Initially there was a path through the grass, but we lost this in a short grassy section with a rock, and had to pick our way carefully through large tussocks and later drainage ditches and young trees as well. After eventually getting out of this jungle on a stile by a gate, we soon found a grassy track going across our way. We followed it and were pleased when it curved round and took us down to the road. It is a real shame about the awkward section inside the deer fence, because certainly Tullich Hill is worth a re-ascent for the views. Maybe we will try it the other way round another time and see if we find more of a path.
Here is our approximate route