On the 15th Sept I had a go at these two hills, but gave up on the summit of Meall a'Bhuiridh because of strong winds and poor visibility. Also it was very quiet and the only other two people I had seen ahead of me, I met just below the summit, they having turned back for those reasons. And to be honest I didn't fancy stumbling off into the gloom myself. During lockdown I had a severe attack of sciatica, and although meds (+booze

) did eventually bring it under some sort of control, I still have a fair degree of numbness/pins and needles below the right knee and that has made me even more cautious than I was before.
Also I had the obligatory parting words of my wife (who doesn't really like me walking on my own

) in my head, concerning, taking chances etc.etc. So caution won the day. I retreated down from the summit, berating myself all the way for not pushing on, and I was even more annoyed when I got to the, by now clagless, summit of Creag Dhubh (the top that overlooks the ski centre) to find casually dressed punters, who had come up by the ski lift, milling around. What a difference from an hour before

.But looking back Creise's head was still in the clouds so perhaps I made the sensible decision for me.
After that, I managed the straightforward Munro, Meall Chuaich at Drumochter. A pleasant and underrated walk in my opinion. 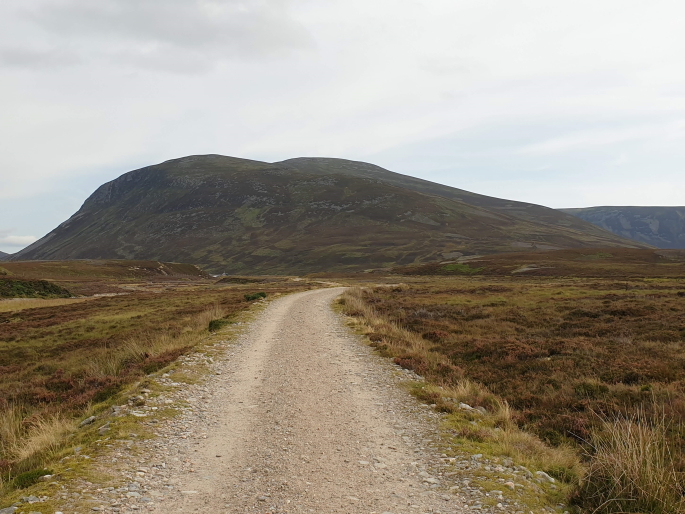 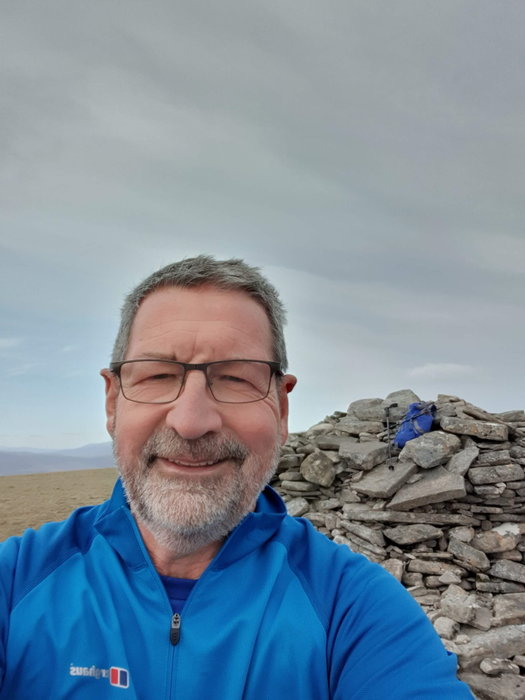 Saturday the 26th was to by next "allowed

day out and I did the two most Eastern of the Lawers Range, Meall Greigh and Meall Garbh, the only two of the Range I had not tackled. 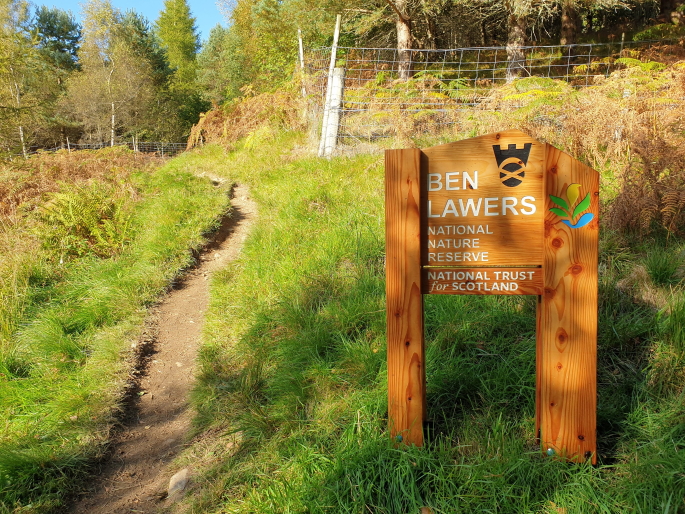 These two are normally done with An Stuc in a loop, but as I had done An Stuc from the west with my grandson Matthew last year my intention was to get the two Mealls done and make a decision whether to tackle An Stuc's scramble on the summit of Meall Garbh. The weather that day was fine and clear but the wind above 700m and on the summit of Meall Garbh was as consistently strong as I have experienced in my, admittedly limited hillwalking experience, so with my morning's obligatory warnings from my wife again repeating in my head, the strong wind, and balance issue due to lack of "feel" in my gammy leg, caution won the day again and I retreated back to the bealach and cut under Meall Greigh to meet the ascent path and headed back to my car. At least I had managed to complete all the Lawers range hills. 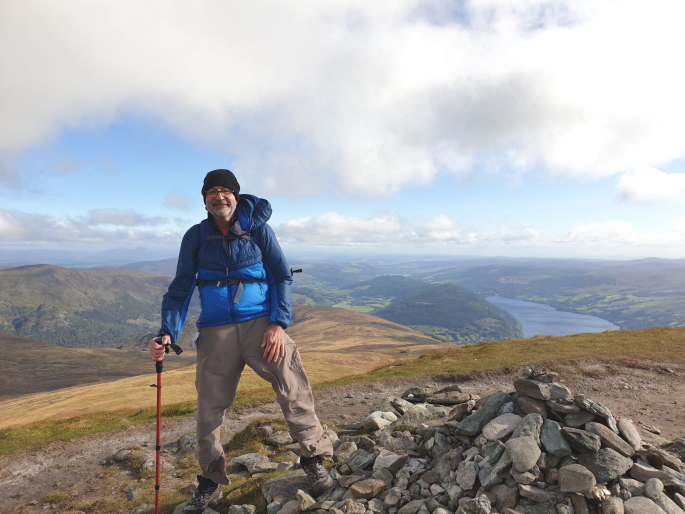 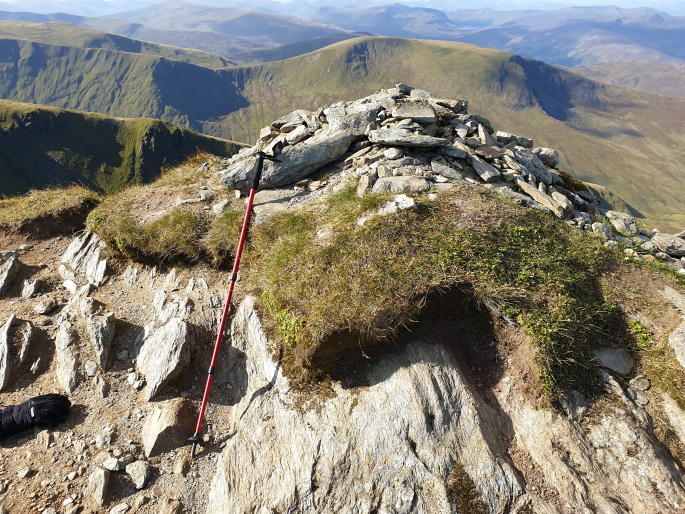 I arrived home, suitably exhausted as befits a man of my age and looked forward to what was forecast to be a pleasant Sunday, relaxing and recuperating. Early evening I found out that grandson Matthew, who had been doing other things that day, was a little bit miffed to have missed out on the day on the hills and before I knew it, his Mum and Gran were mentioning the possibility of going out the following day. Now I really enjoy my hillwalking but I'm not the youngest or fittest guy or gal (even for my age) on the hills, so two days in a row is quite a big ask, but at 10pm, I found myself in Tesco getting supplies (chocolate

) for the following day

.It was decided we would return to the ski centre where Matthew would be able to add two new Munros to his tally, taking him to 43, and I would tick one more off and be able to make up for my disappointment of my failed attempt a few days earlier.
We set off just after 7.30am. One of the benefits of climbing these two hills is that you are able to drive to the starting point without the concern of getting somewhere to park as the ski centre has a huge car park.
NOTE. THE GLENCOE PICS ARE A MIXTURE FROM MY TWO VISITS.
Setting off around 9.30am, we were immediately into the section I was least looking forward to, the "path" running under the ski lift up to the first plateau. Calling it a path is a bit of an exaggeration. It is more a scree filled water run-off channel and going up (and even more so) and down it with the chairs passing by overhead, is NOT the highlight of the walk by any means and it was a relief when we reached the end of this section. 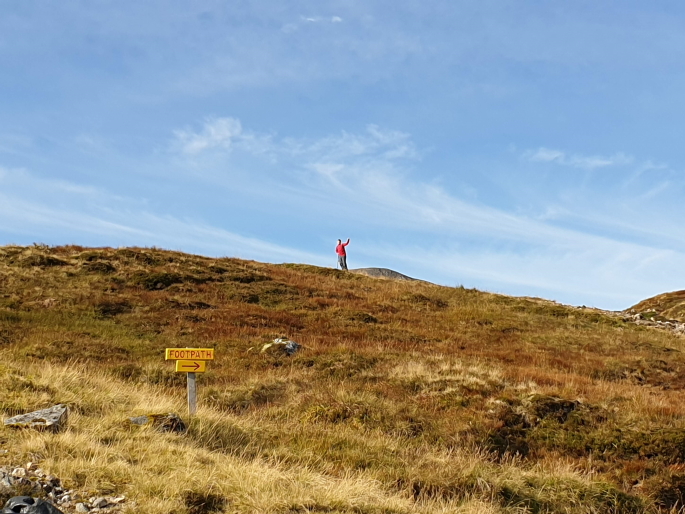 Matthew reaches the end of the ski lift path first.

? After all I had done the path just a few days before and I was only returning myself to the point I had turned back, to carry on from there so to speak. Well the thought did enter my head, but not seriously. For my own satisfaction (and Matthew's) we had to do it from the established starting point of the climb under our own steam. But there are no set rules in hillwalking and if taking the lift adds to, or aids, your enjoyment then nobody can say otherwise. I did mention the ski lift poser in a lighthearted post on a FB walking group and it did lead to a lively discussion about mechanical aids and hill starting points. I digress. 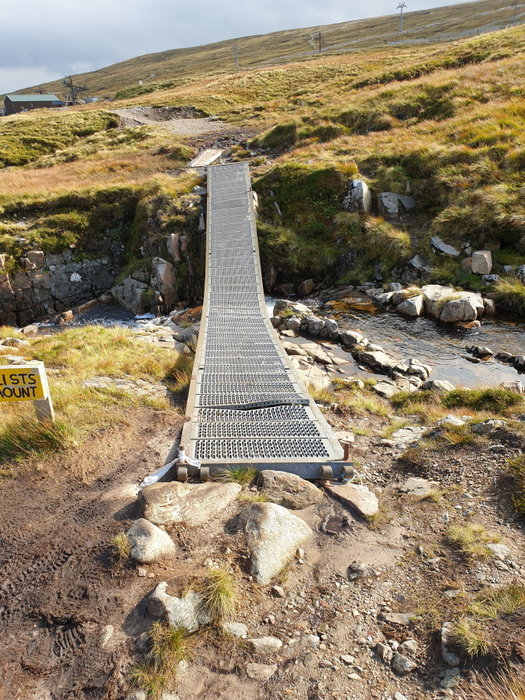 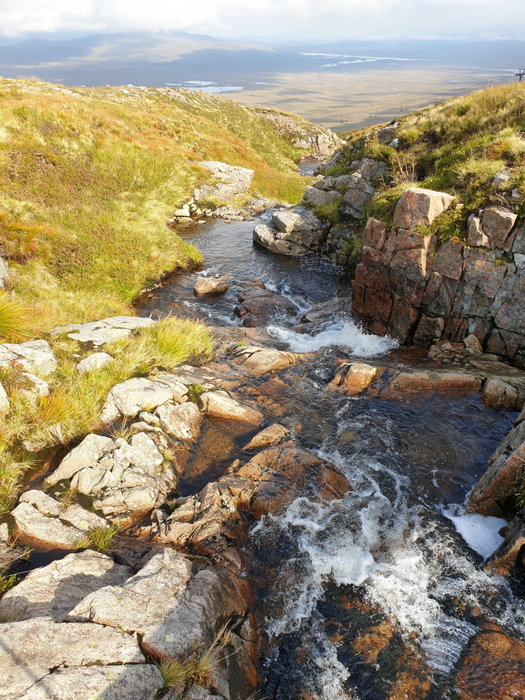 View from the metal bridge.

We made our way up the grassy slope of Meall a'Bhuiridh where the views opened out. 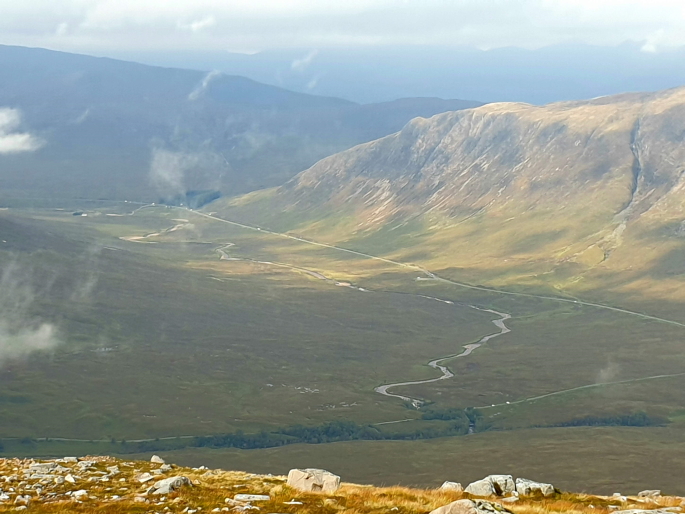 The A82 leading up to the bend at the bottom of the Devil's Staircase and the Lagangarbh cottage. 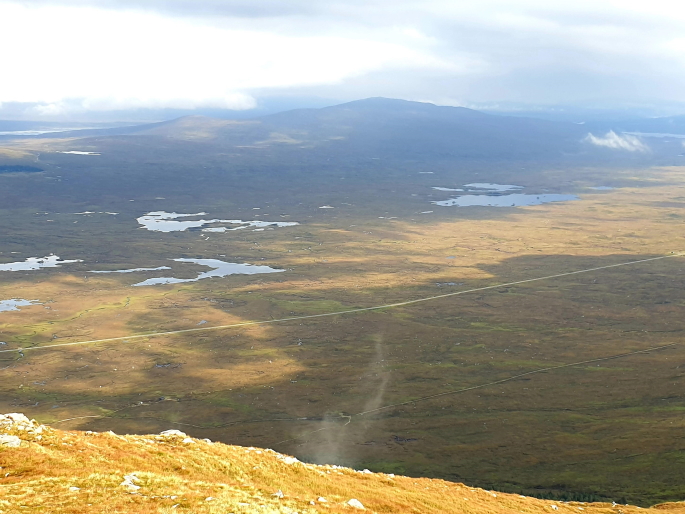 The A82 and Rannoch Moor beyond. 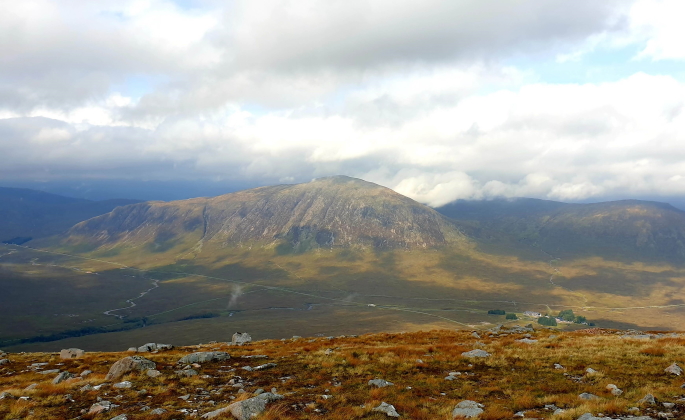 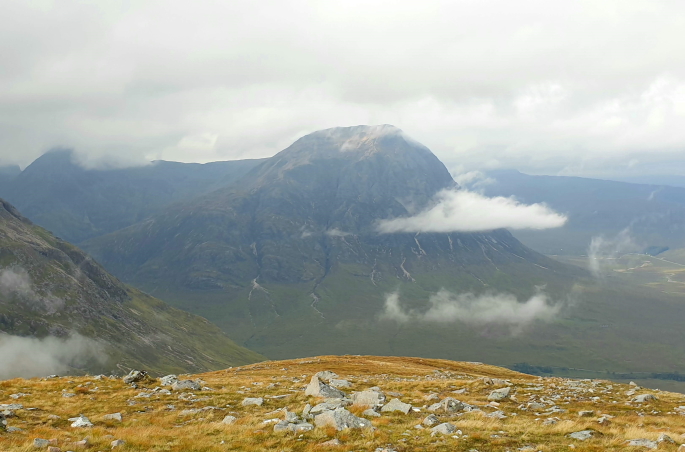 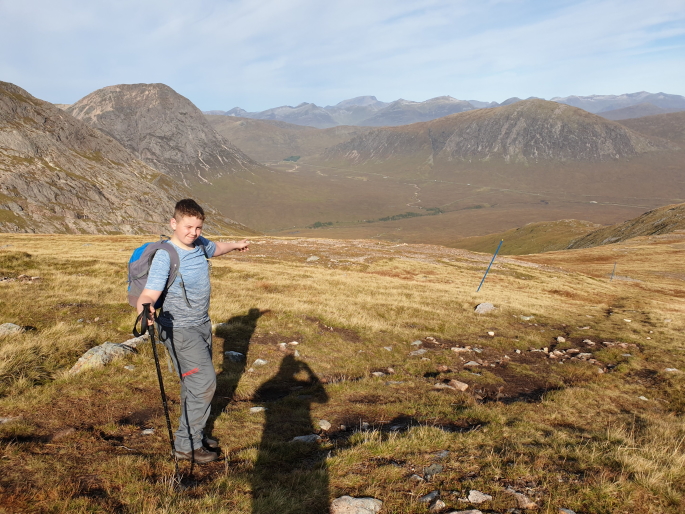 Eventually we reached the stoney/rocky upper section that leads to the summit. It is these boulders, I guess that make it necessary to re-summit Meall a'Bhuiridh on the return journey from Creise (not unless you involve the northern facing aspects of Sron na Creise, I think) as it would be pretty difficult underfoot short cutting under the summit to regain the path. 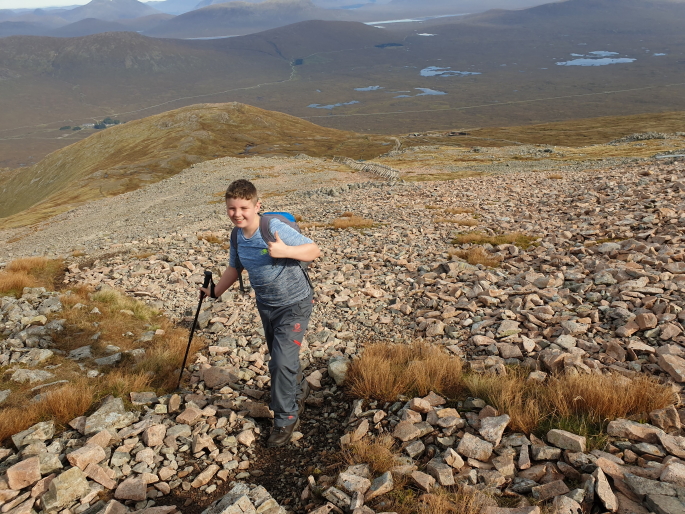 Matthew enters the rocky section near the top of Meall a'Bhuiridh.

We reached the summit of Meall a'Bhuiridh and for the first time I was able to take in the views. 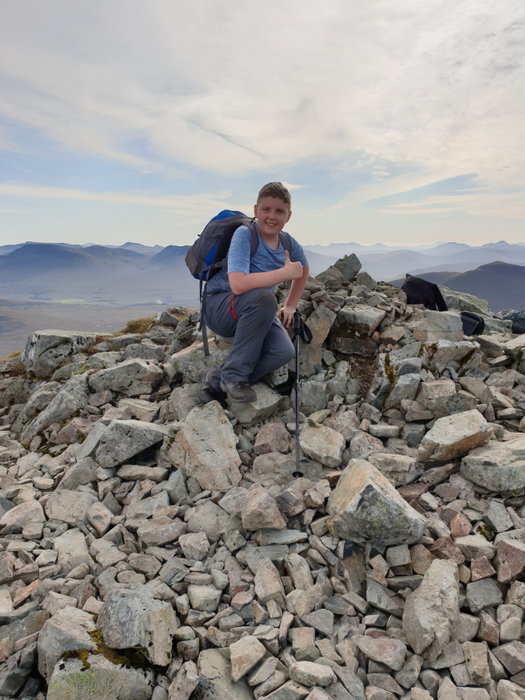 Matthew at the summit Meall a'Bhuiridh.

This may not be the most glamorous mountain in the area but it certainly has tremendous views all round, way to many tops to name and Peakfinder was used to try and identify the furthest away ones. It also revealed the previously hidden route to the ridge that takes you onto towards Creise summit. And boy did it look steep. Pictures don't really show it. 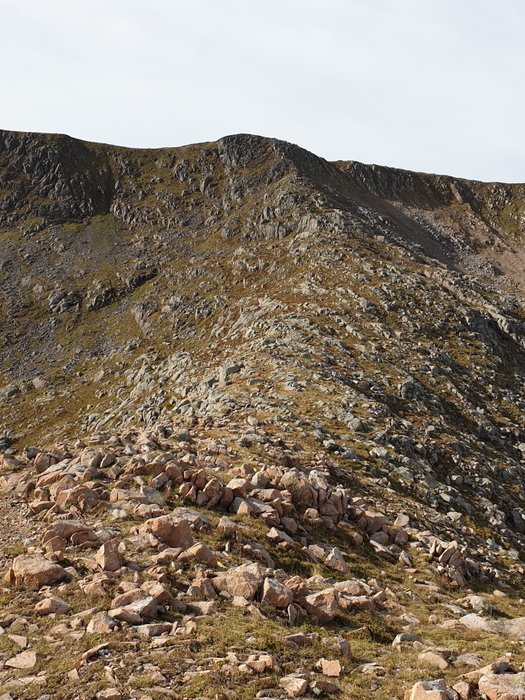 The route up to the Creise ridge.

After a short while at Meall a'Bhuiridh's summit, we descended somewhat apprehensively towards our upward scramble and I was pleased to see the closer we got to it's beginning, the less vertical it appeared and despite there being some larger steps towards the top, there were no particular problems and we soon popped out onto the stoney ridge that leads to the summit without much problem. 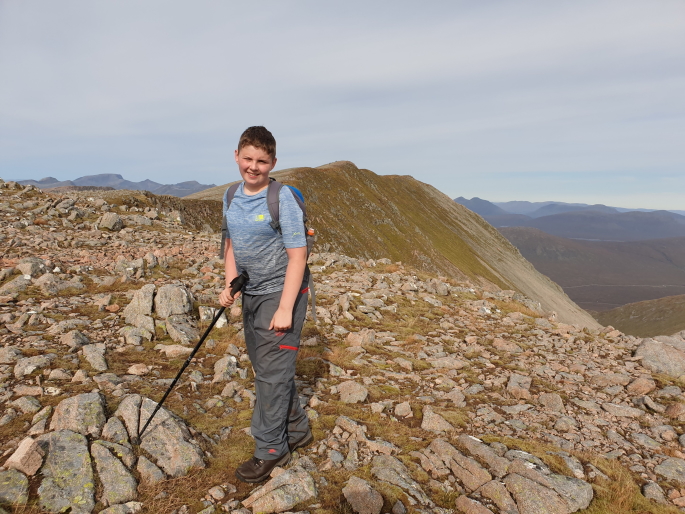 Above the scramble and on Creise ridge.

We reached the summit of Creise shortly afterwards and it was here we had our longest break. 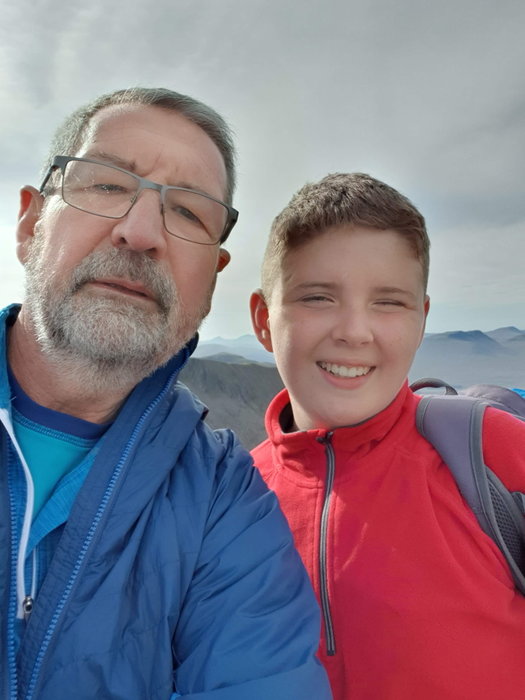 Again the views were superb. We got, what for us, was a different view of the nearby Big Buachaille with Baby Buachaille behind and Bidean further behind again. Over and behind the top of Stob Dearg, Ben Nevis and it's arete appeared deceptively close. 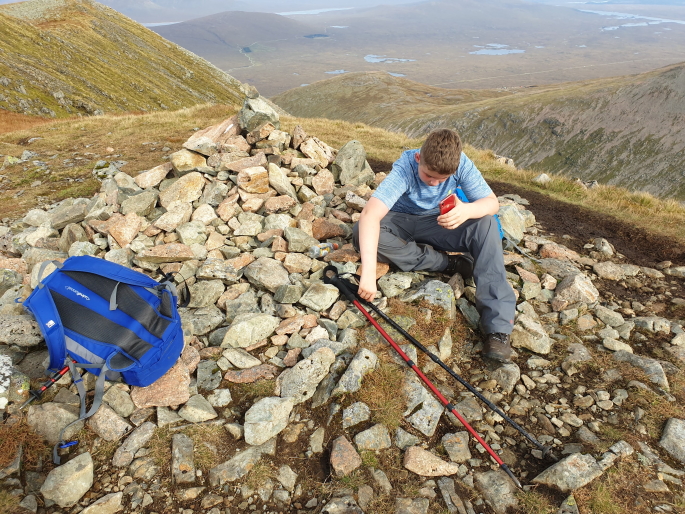 Matthew phones his Mum to tell her of our progress.

The weather was fantastic. It was hard to believe just 24 hours earlier I struggled to keep my balance on Meall Garbh and here Matthew and I were, over 1000m up, with barely a breath of wind, at the end of September in short sleeves (well Matthew was anyway, at least to begin with). However we did hang around the summit long enough that a layer was necessary eventually due to our lack of movement. 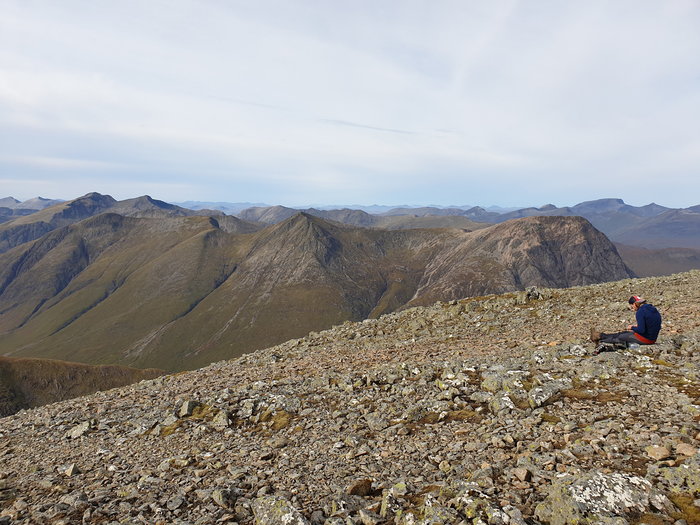 View of the Buachailles and Bidean beyond. 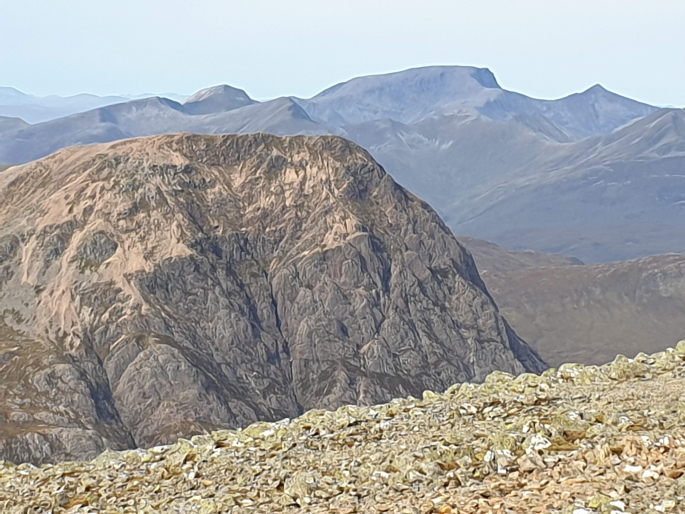 I think the reason we hung about Creise summit for so long was that neither of us was particularly looking forward to the re-summiting of Meall a'Bhuiridh. It's funny that going for a third summit would mentally be OK, but climbing back up to a summit already done can be a bit of a bind. However it had to be done. 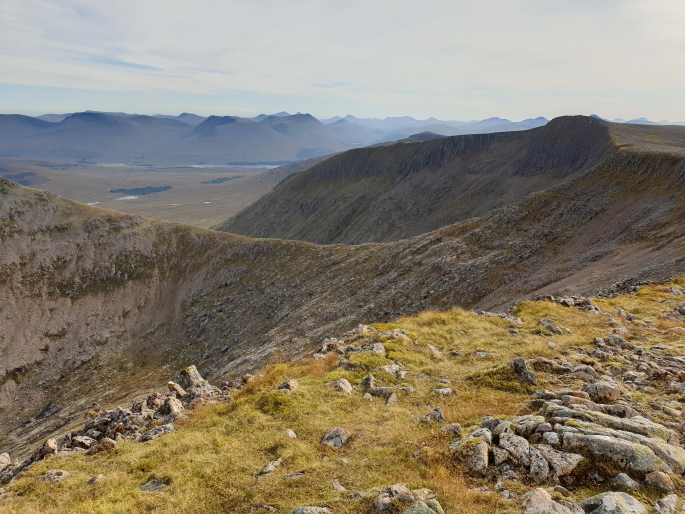 We slid down the scramble and began to climb upwards for the last time. 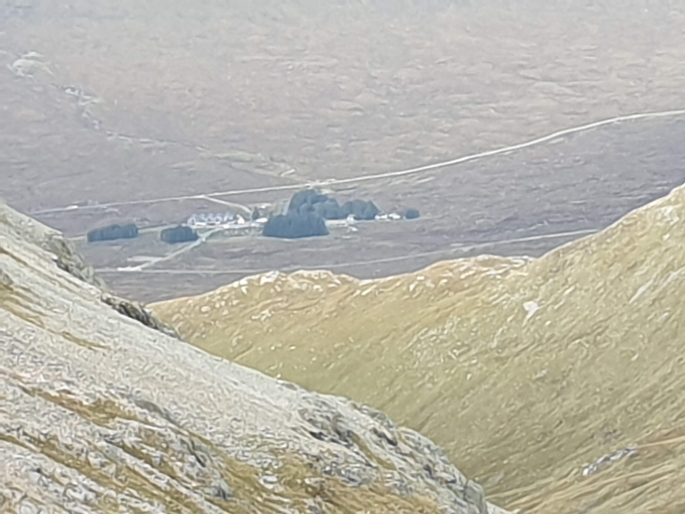 Looking down on the Kingshouse Hotel from between the summits. 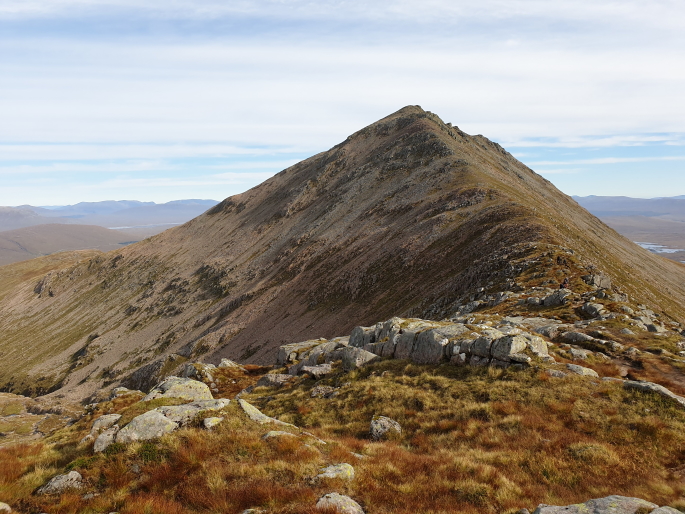 Heading back up Meall a'Bhuiridh.

It was the 3rd time I'd been on this summit in the last few days, the second time that day, and effectively the fifth summit I'd been on in the last 24hrs or so, and my feet and legs were beginning to let me know this. Matthew had a mump about there NOT being a bypass path but we eventually reached and hopped over the summit and headed down towards the ski lift building.
When I had been here earlier, I had detoured onto the top of Creag Dhubh, which has tremendous views for those who come up on the ski -lift and undertake a short walk, but we gave it a miss this time and just began the descent down the ski lift path, a path I am happy to say I will not be taking again.
We arrived back at the car outside WH time guide, but we hadn't rushed and as long as we were back at the car before it started getting dark I wasn't concerned. I was just faced with the drive home and as on the previous day I had had to jump out my car at a layby near Callander to stretch a cramping thigh muscle, I was concerned I was going to struggle a bit again, but we managed to make it home in a oner

. Having said that my quads let me know where they were on the Monday and Tuesday!!!
After a slow start to the year, due to Covid and my sciatica, this trip left me, surprisingly, somewhere I wouldn't have thought possible a few weeks ago, two Munros short of my yearly goal of catching up with my age of 65. Here's hoping I have the possibility and weather to get another two.

. Its usually a good option to save the hills for the views - the views fair get rid of the pain of getting to the top in my case

. Hope we can all make the most of anymore good weather to come