Having driven up the day before from the East Midlands, I started my day with a cup of tea and peanut butter & banana rice porridge in my tent, at the lovely campsite in Tyndrum. It had been a rather chilly night of broken sleep, waking a couple times reaching for a third pair of socks and then another coat, but my nervous excitement about the day ahead meant I soon forgot about that…

Before I knew it, I was back on the A82 crossing Rannoch Moor, trying to hold in my giggles of excitement (I was really excited), blaring Sultans of Swing by Dire Straits - a song for me which is synonymous with Scotland and our childhood holidays to Sutherland and the north coast in the campervan. Then in all its majesty, Buachaille Etive Mor was unfolding in front of my very eyes.

I had been planning this September trip to Scotland since late July, but I had yet to decide exactly where to go. Taking advantage of having the key to our University Mountaineering Club stores (committee perks) I grabbed some Scotland OS maps, which covered a good part of Scotland north of Loch Lomond! The plan was to head wherever the Scottish weather looked kindest. A friend of mine had just completed the West Highland Way, and she had shared a stunning photograph of the Buachaille with a blue skied background, so I had my fingers crossed for some good weather in Glencoe. 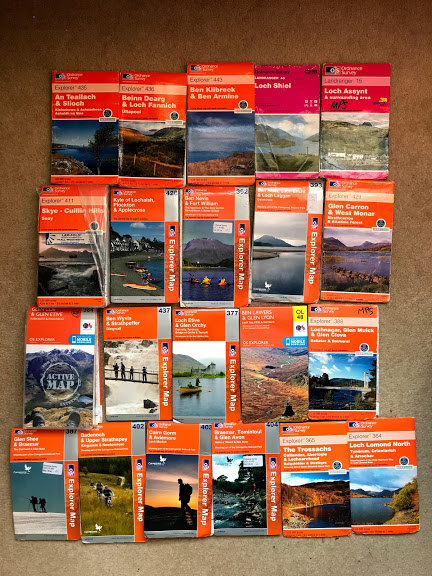 A selection of Scotland OS Maps, all about options...

I parked up in the lay-by and booted up. It was overcast but dry. I was feeling quite anxious as my eyes flicked between the map and the coire behind Lagangarbh. In my head I had been toying with Curved Ridge but decided that was probably an adventure to save with some friends, seeing as this was my very first solo day out in the hills. 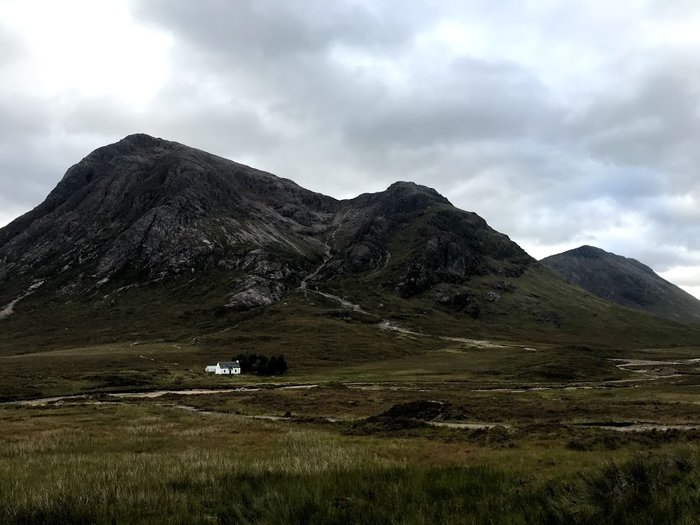 0935 and I was on my way, making good pace alongside Allt Coire na Tulaich. I came across what looked like a freshly deposited hat, quick bit of anti-bac on my hands, I popped it in my sack soon catching up and returning it to its rightful owner. Crossing the loose scree towards the back of the Coire, I had a momentary flash back to the Great Stone Chute but muttered to myself that this could not really be compared. No views to be had at the bealach, nonetheless I headed upwards towards Stob Dearg feeling rather thrilled that I was about to bag my first solo Munro! 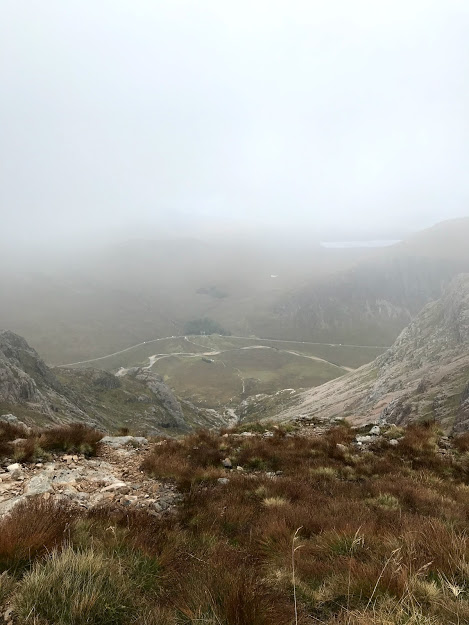 Clouds above the bealach, looking into Coire na Tulaich and down to the A82


Metres away from the top, the wind cleared the cloud and I was treated to fantastic views across the rugged mountains of Glencoe, to Loch Linnhe, the wide expanses of Rannoch Moor, and beyond! A flask of tea and some chocolate digestives were in order.

Adding another layer, I was almost (only almost) regretting the 20 minutes I spent taking in the view – the wind certainly had a chill to it! Tea with a view across Glencoe

By the time I reached Stob na Doire, two lots of people had asked for some directions and information about the route (slightly disconcerting for a ridge walk

). Nonetheless, I took this to mean I probably looked like I knew what was doing, which felt great and I waved goodbye to the last of my anxious niggles and I could fully enjoy the day. I dropped my parents a brief text to say what had happened as I thought they may also like the relief and some reassurance to the fact I was getting on just fine! View back to Stob Dearg from Stob na Doire. En route to Stob na Broige from Stob Coire Altruim I had the company of a small bird hoping around, which I think may have been a female Wheatear based on the plumage, but I could not be certain. I reached the second Munro and sat down for lunch enjoying the satisfaction of reaching the last top of the day, in addition to the incredible views down Glen and Loch Etive. View to Loch and Glen Etive

As I was retracing my steps, the weather was changing quickly. Amidst some passing snow flurries, I was drawn to the dramatic scene cast on Buachaille Etive Beag by the remaining beams of sunlight and occluding dark clouds. Not long after I began the descent into Coire Altruim, the heavens opened, and the sound of roaring stags became muffled as I pulled up my hood. I was glad to see not too far ahead the couple who had asked me on top of Stob Dearg ‘which way was I was going back down’, as I spent a good part of the day thinking it would have probably be better to have told them to go back the way they came up, rather than trying to talk through the rest of the ridge when they didn’t appear to have a map with them. Rain coming in on the descent into Coire Altruim

I got back to the car just before 1530. The rain had passed and there were some blue skies above Glencoe again. My cheeks were aching from the beaming smile I had on my face all day. I really felt proud of myself after a successful first solo mountain adventure, in beautiful Scotland. Sunshine to end the day!

Feeling even more enthused for the next couple of days when I checked the MWIS website to see ‘extensive or unbroken bright sunshine… superb visibility’ forecast! But at that moment, I was eager to crack onto Red Squirrel Campsite, get something on the go on the camp stove and perhaps dig out a gin & tonic!

Some great effects of light in your photos! The one of Beag lit by sunlight in contrast to the dark all around is marvellous.

Curved Ridge is not too difficult in my experience (I found Aonach Eagach harder, though the weather was awful that day) - route-finding on the lower part is the most tricky element of the route, I think.

HalfManHalfTitanium wrote:Some great effects of light in your photos! The one of Beag lit by sunlight in contrast to the dark all around is marvellous.

Curved Ridge is not too difficult in my experience (I found Aonach Eagach harder, though the weather was awful that day) - route-finding on the lower part is the most tricky element of the route, I think.

Thanks Tim! Sometimes I think I prefer a hill day with dynamic weather and light, to a day of clear blue skies, adds a whole new dimension to the mountains...

And that is good to know about Curved Ridge, thank you

Definitely will come back to do that route soon!

Great choice of the mountain, one of the most iconic !

Glad you enjoyed it, well done ! I guess many more solo days in the mountains will follow

All the Best !
Petr