A day where everything was thrown at me....

A day where everything was thrown at me....

Note - please don’t be fooled by the pictures at the start as to how the day went.

The initial walk in was lovely, crossed over a bridge which I was unsure would hold my weight, but continued. The sun was out and some beautiful views were seen. Probably just as well because as far as views went that was about it for the day!

Just before reaching the first summit, the cloud came lower and the chill in the air was felt. An extra layer added, a few selfies and I was on my way again.

The walk from the first to the second summit wasn’t too bad, seen a couple of pretty rainbows, some clouds and some hills.

When descending from the second summit to head towards the third, I lost concentration for a while and was ‘just walking’ in the wrong direction round in a circle! After calming down from being slightly panicked and focussing again on where I was going, I headed towards number 3 of the day!

Little did I realise that in actual fact number 3 isn’t a Munro and I still had a bit of a climb ahead of me before I reached it. See picture with my face and finger gesture to what I thought of this!

Finally, summit 3 was reached. This was when the day changed. Cloud came down again, snow falling from the sky, icy cold temperatures but on the upside I was greeted by 2 lovely walkers shortly after who took a picture for me.

This is where I though I’d best get some food into me - see picture of lunch and views! (No views and boring healthy snack)

The snow soon stopped and I was on my way to summit 4.... then came more hail. And some rain. And some wind.

Once reached, quick selfie taken and I just wanted to get down. It felt like an incredibly long day already.

But the weather had other ideas - literally the whole decent it rained, hailed, snowed and the wind never thought to give it a rest!

Finally I reached the main track and headed for the car park. 12 miles today felt like 267339376251. But I persevered and conquered another 4 munros!

Now I’m showered and tucked up in bed for the night and I think I’ll sleep pretty soundly tonight! 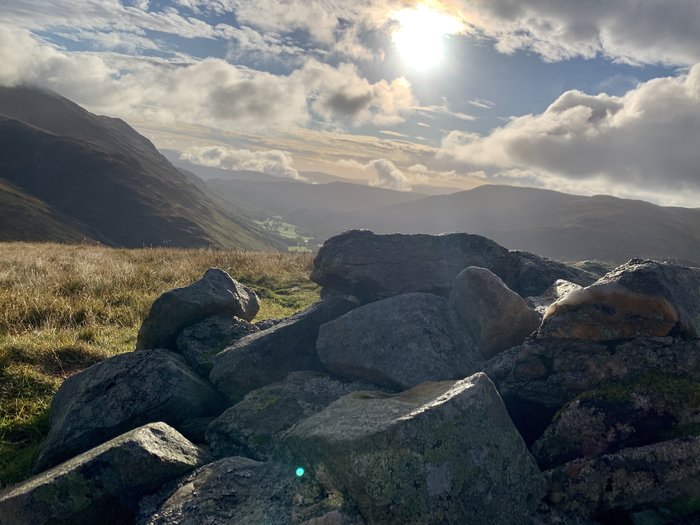