So the clock was ticking away, as was my tiny, wee brain. Opportunity for a couple of days away looked on, but what hills to do? Don't ask why, but I think weather nudged me to look at several long trips, which could all be made that bit easier by use of a bike, to a greater or, lesser degree.

First on the list was a trip back to the Strathcarron area to have a go at Lurg Mhor and Bidean a'Choire Sheasgaich. Met Office forecast was wall to wall sunshine from late morning and no mention of the strong breeze that hit me as soon as I got out the car. Ehhh?!

Not only that, it was coming straight from the east. Cold and right in my face most of the journey in. 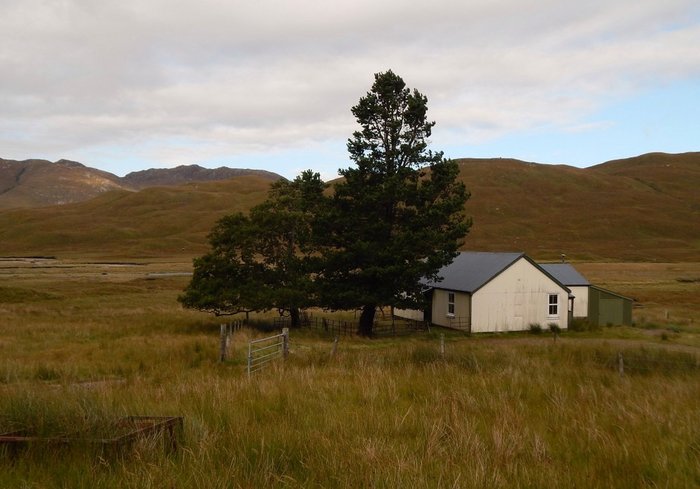 Finally huffed and puffed my way in as far as Bendronaig Lodge.

Those who have done the trip will know how arduous the walk/cycle can be, so the wind was not welcome one bit. The thought that it would be behind me on the way back was not much compensation, my cynical mind promptly deciding it would no doubt die down by then and my even more pessimistic mind, deciding that it would have turned 180 degrees and be against me on way out, too! It sure was hard work pushing the bike up those steeper sections and sometimes just about as hard getting into the saddle on some downhills. I was having to work harder than I ought, to justify taking the bike however, eventually Bendronaig Lodge and bothy began to grow from a mere speck to their full size. Below the hydro dam.

I just kept to the new track (Hydro) then deposited the bike at the bothy, before heading for the rickety old bridge and pass through to Loch Calavine. The bridge is indeed rickety, but two ladies crossed it on the way back without misadventure. I took the cowards route going and coming 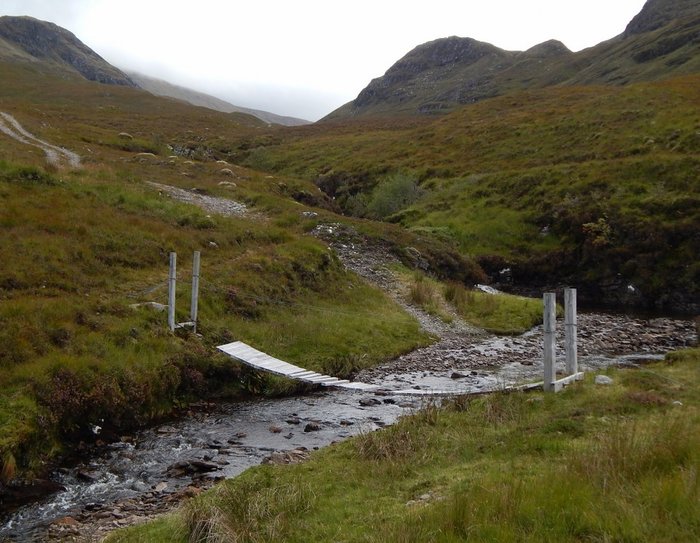 The rickety old bridge across the Allt Coire na Sorna, toward Loch Calavine.

Was a bit surprised to meet a few folk heading the opposite way, but turned out they were doing the Cape Wrath Trail. Hardy people! By now my thoughts and glances were increasingly turning skywards, looking for the promised sun. I think MWIS was on 70 or 80% for clear summits. Wasn't looking hopeful looking over Loch Calavine toward Mullardoch hills, or from signposts, up to the bealach between Lurg Mhor and Ba'CS. This stretch didn't look too arduous, but was to prove otherwise. Probably an indicator the trip had taken more out me than I thought. Look back to the bothy and road in/out. Loch Calavine, the Mullardoch hills beyond and a hint which way to go.

By time I was at the bealach, I had to get the compass out and was probably muttering curses about the Met Office, MWIS and anything else I could moan about. I was looking to the slope up Lurg Mhor, when much to my surprise two figures appeared, descending from the fog. It is a petty thing, but gives me a small thrill to know I was first on the summit on any given day. Alas, another reason to moan

Had a nice wee blether with the ladies who had set off from their camper van at Attadale earlier in the morning. I was less confident in their reassurance the top would be clear by time I got there. Despite a slight brightening of the fog, my suspicions were to be proved correct. Can't remember for sure, but think I was about 4 hrs to here. At least I could see the cairn :) 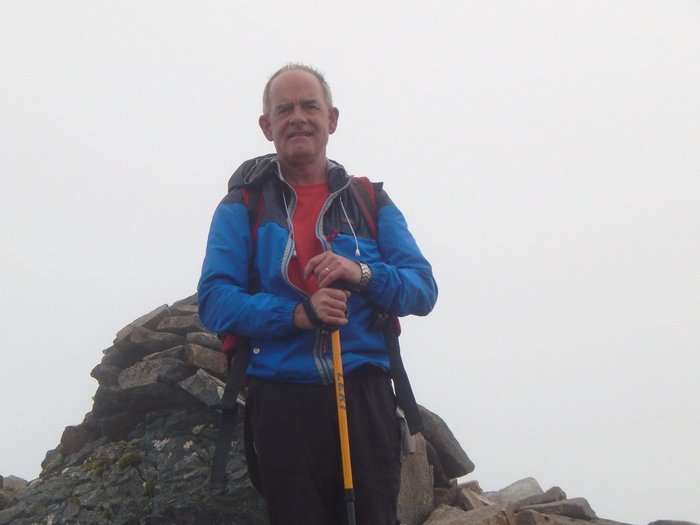 Reversed the compass bearing and set off for Bidein a'Choire Sheasgaich, where I berated the ladies for raising my hopes and also met a chap, who had come in from Craig. He looked as tired as me

He had gone a bit off track, but felt his route was the more arduous. I don't plan to return to prove his theory correct A view, of sorts. Looking back to Lurg Mhor, stubbornly refuse to throw of the clag coat. Didn't realise it at the time, but this was looking across to the back of Sgurr Choinnich and Sgurr a'Chaorachain.

Anyway, the views from the Cheesecake were as good as the first Munro. Zilch! I had been contemplating returning via the bealach, but decided to keep to the WH's route. Fortunately, between compass, bits of track and good luck, I managed to find my way back down to Sail Riabhach fairly well, much to my relief. By this time the cloud was making more effort to clear and I was now beginning to spot the Torridon hills, Skye and the road back out from Bendronaig. C'est la vie! About all I saw of Loch Monar. Not looking my best :)

Descent off Sail Riabhach was a bit hit and miss on some rough ground, but after that it was all back on the Land Rover track. My earlier pessimistic suspicion about the wind direction was proved wrong, but my cynicism over the wind strength dying away was proved very correct

The journey back out however, was much easier, aside from one or two uphill stretches and the fact one has to concentrate very seriously on the braking on many of the steep, windy, stony descents. Views across to An Ruadh-stac, Beinn Damh behind and Maol Chean-dearg begin to open up on the descent. Looking down to the bothy and the long road out. 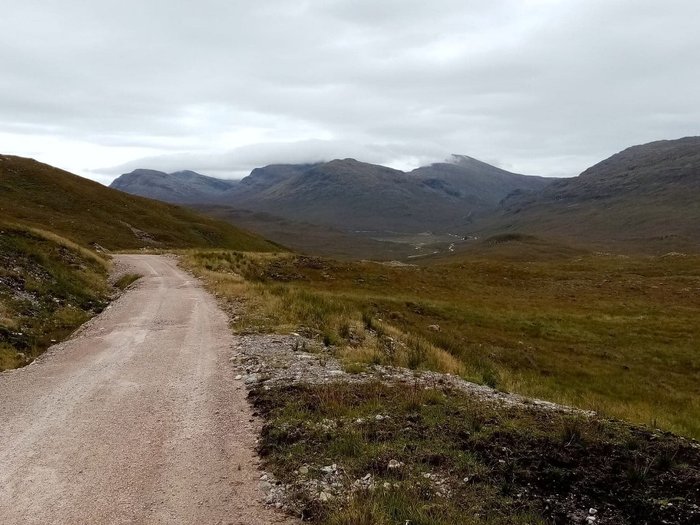 The bothy and hills left behind. Summits still in the clag, though Lurg Mhor, just about clear.

I tried to push on near the end, but wasn't able to beat the 8 hour mark. Not to worry, it had been a testing day and a nice meal and few pints would ease the pain, back at the Lochcarron Hotel, where I was to meet a couple of nice bikers and spend the night with my Kindle. No chair up against the door, Pam A look across to Attadale and the road winding up the hill, next morning That story led to a hilarious night in Kilmartin, with Gavin, Carol and Andy, but that's one for a different blog 😁