Lovely, calm morning waking up in Lochcarron. The knock on the door through the night never materialised, but the Kindle had come in handy

(private joke). Had light breakfast, settled up and hit the road around 8, aiming to revisit Inverlael, to do the Beinn Dearg trio. (Eididh nan Clach Geala was already in the bag after an earlier visit to Seana Bhraigh.) Across Lochcarron to Attadale, before heading off for Beinn Dearg.

Forecast when I'd left home was for a clear day, but like the day before on Lurg Mhor, I was to be left doing plenty of grumping about the Met Office. Car park was very busy when I got there. Looked like plenty of others weren't too concerned about stalking issues. I had tried to contact estates for clear advice, but didn't have the easiest of times, unlike the Lurg Mhor trip. Lochcarron, much calmer than day before.

Anyway, soon had the bike unloaded and making descent progress up to Glensquaib. Not sure exactly when or, where but soon began to feel a not unfamiliar ache, particularly in right knee. Damn, that doesn't feel nice. Hope that won't get worse! Hard to know what caused it, either the cycling, tough day before, plus I'd jolted one of my knee's jumping from a rock, coming of Liathach a few weeks earlier. Nice spot at Loch Lathail, as the young couple blast on up toward Bealach an Lochan Uaine.

Left the bike at the turning circle, but the nagging knees stayed with me the remainder of the day, progressively getting more painful. Should I have called things off a lot earlier? Probably, but not an easy decision to make, so far from home, great hills and good forecast. 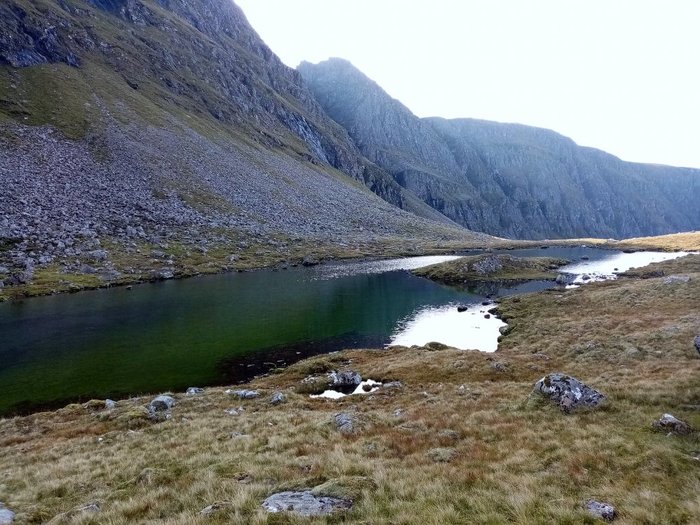 Continued on the long but, pleasant grind toward the bealach between Beinn Dearg and Meall nan Ceapraichean. Went a bit off track after crossing burn nearing Coire Mathair Lathail. Cost me a bit of time and pain going over horrible ground, before working back onto the route which lies much closer to the high sides of the crags than I found myself.

Nice spot at Lochan Lathail and zig-zagging up to Lochan Uaine. Had a bit of a blether with a young couple who had went galloping past the old codger and they voiced similar frustration, as did several others, at yesterday's Met Office forecast and thus far today, as Beinn Dearg and others remained shrouded in thick fog. Left behind, as the quicker one's head up the dyke.

Fortunately the youngsters soon finished their grub and made off for the start of the main climb, leading the way ahead for me, though one soon comes to the amazingly long dyke which climbs up the NE side and across the mountain. I'm sure I am not the only one one to marvel at the dyke builders and wonder just 'why??' Across to Meall nan Ceapraichean, heading up Beinn Dearg.

It is quite steep and rocky going up the side of the wall, though I subsequently found there is quite a lot of good, easy path out to the north side By now there were quite a few groups about, almost all going quicker than myself. Nevertheless, I was happy just to make it to the summit, after the short haul from the break in the dyke. Alas, another viewless summit. This is becoming a bit of a habit! 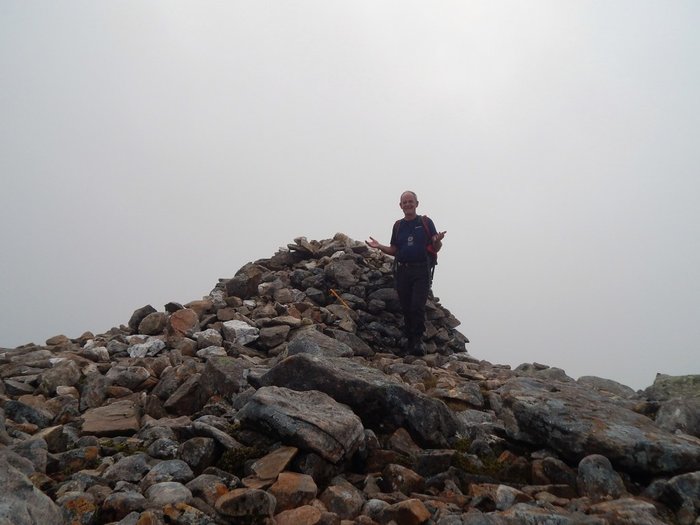 Summit, Beinn Dearg. Another viewless one. Over the lochans to Meall nan Ceapraichean.

Took more of the path on the way down before crossing back to the wall, then traversing round to the next bealach to begin the haul up Cona Mheall, by which time there were positive signs of the clag beginning to lift from the summits. Hurrah!

The general route of ascent tends to drift diagonally right(SE) away from the cairn on top of Cona Mheall, but the climb seemed fairly quick and easy despite the pain from knees. From the summit enjoyed better views toward Loch Priille and waterfall at its south end, Seana Bhraigh and closer tops. By now, Meall nan Ceapraichean looked a fair way away, if not too challenging, though even the traverse back round to Lochain Uaine was by now a grind. 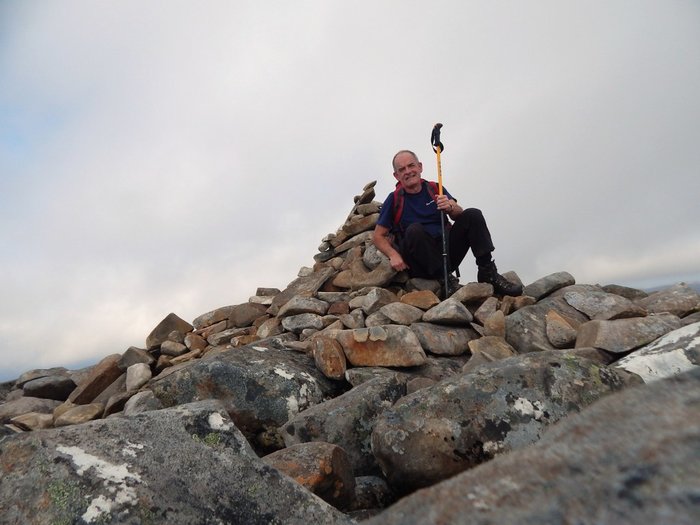 On the summit of Cona Mheall. 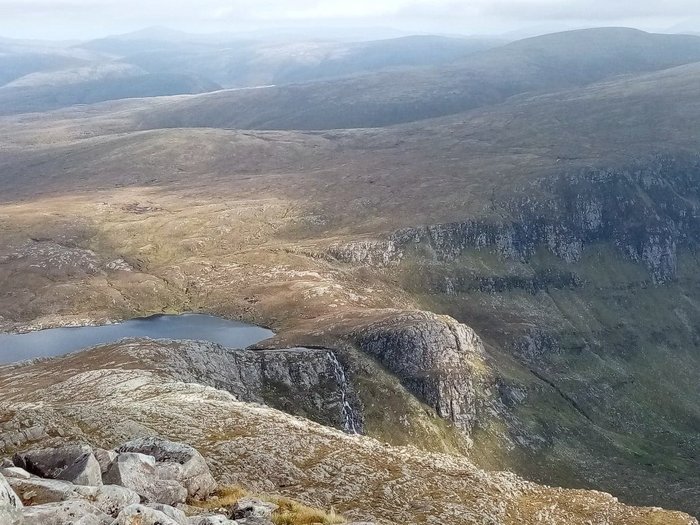 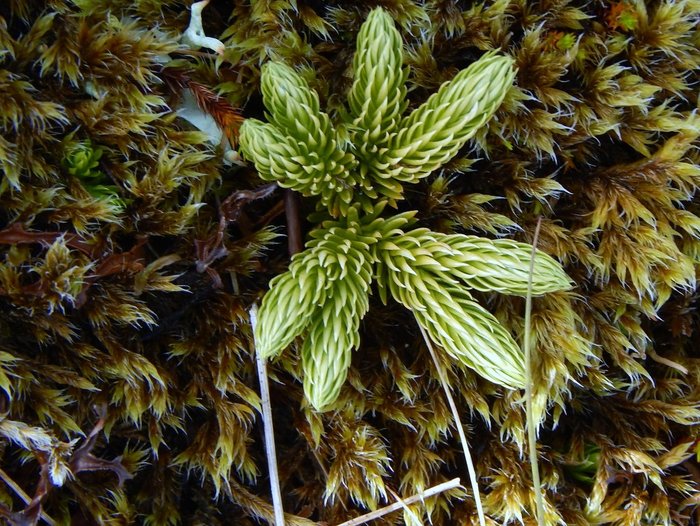 At last, Beinn Dearg emerges, as I head off Cona Mheall. It was now just a case of keeping going to the third summit. Boy, was I glad I had the foresight to do EnCG before

I severely doubted whether I could have pushed myself on to include it, though I knew the return back to the bealach and out would be no cakewalk either. On way down met chap who'd set off walking, as I set off on bike, which didn't exactly boost the morale either, then another guy who was carrying his bike! Not sure if I picked him up right, but think he has done round of Munros before 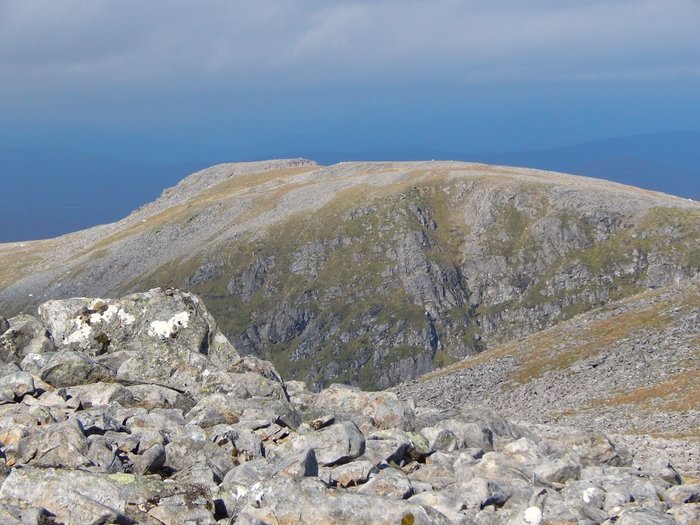 Across to Eididh nan Clach Geala. Very grey, perhaps should describe it as silvery, looking over to Seana Bhraigh. 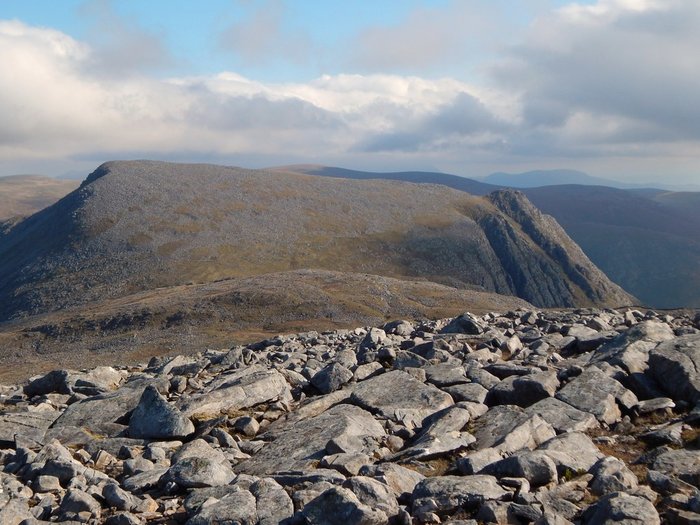 Out to Loch Broom and Ullapool. 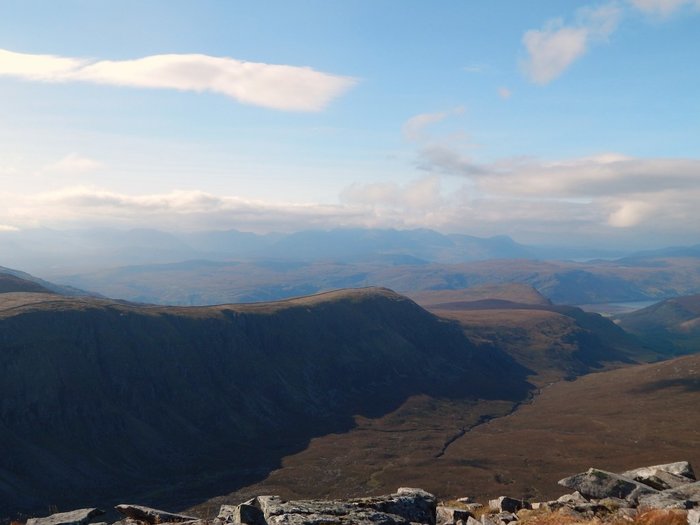 I think An Teallach should be out there somewhere? 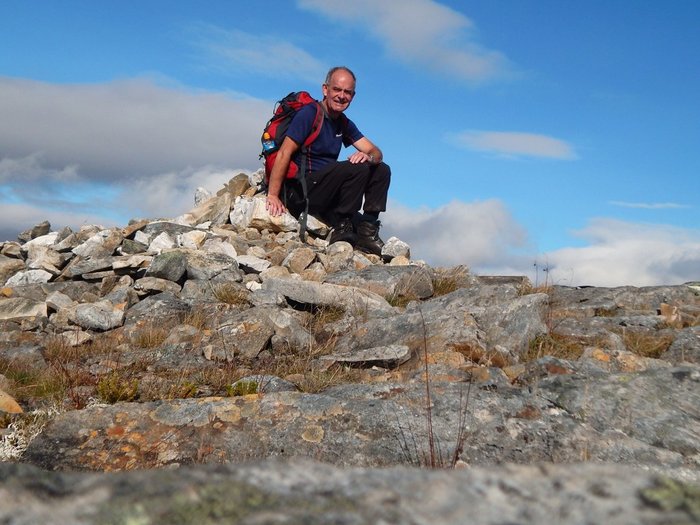 Managed to keep to the track on way back to bike, though by now I was having major reservations about whether I would manage Day 3 - Ben Alder? The cycle out was indeed a pleasure, as very little pedal power is required. Finally, trundled back to the car in seven and a half hours. Tired, sore but, still thrilled with a fine trek into the hills. Look back to the bealach, heading for home.

Enjoyed the drive to the Waverly, Dingwall and nice meal, pint or, two in the Mallard, tho their social distancing left a bit to be desired. Heading for Dingwall. Reversal of earlier view from Loch Glascaroch, up to Beinn Dearg and Cona Mheall. Had a nice evening in Dingwall and was impressed with their war memorial.

As for the Big Bike Hike Day 3? It didnae happen

For once, probably did the right thing in the morning when one or, two niggles got the message through to me - just go home and what a beautiful dtive, on a superb day it was, but not ample compensation for missing Alder.