The forecast for much of Scotland was quite frankly PANTS for the weekend, but after considering various options, we homed in on Stuchd an Lochain in a bid to accompany Heather on a wee outlying Munro (146). The forecast shifted a bit but we decided to head up early Saturday evening for an overnight stop at the dam and an earlyish start on the hill.

After a wander round Killin and an extended wait at the chippy van, we didn't head off from the car park until well after 6:30pm, hopes of putting the tent up in daylight faded as fast as the light itself. The road over towards Bridge of Balgie is in very poor condition but we didn't have too many cars coming the other way and they were easily spotted approaching in the distance with their lights on. Lynne and I were in the camper following Heather, thankfully, Heather remembered to turn off at the Lochs Estate junction and we arrived at the dam around 7:40pm. It was still dry but fairly breezy as we attempted to find a few square feet to pitch my new lightweight tent. Opted for a spot literally next to the cars, fairly bumpy and wet elsewhere.

I had bought the Vango F10 Xenon UL 2 in a bid to cut down on weight for my ML course expedition next week, along with a lighter backpack after our trek into Ossian made me realise i carried way too much weight lol. I had set the poles up in the tent earlier in the week just to get an idea, simple enough , 2 poles, 5 guy lines, no porch footprint so I had taken the banshee footprint to experiment, definitely worth it, otherwise it could get pretty boggy there. I've done some digging and it appears the Xenon footprint only covers the sleeping area so I'm getting a small square sheet to use in future. You can also stand up within the porch footprint area so you can be upright to put your boots on. Great space for 2 packs, boots etc if you are doubling up.

Tent up by 8, just as the rain started. By the time we were in the van pouring the gin, the rain was pouring outside, the rain didn't last long, in fact, the gin lasted longer lol. Off to bed around 10pm, cosied up with my new sleeping bag liner too, comfy cosy.

Woke properly around 6:30am and decided to nip out for a comfort break before it got light. There was a camper close by and another down at the bridge under the dam and around 7am, more cars were arriving. I nipped to the van to pick up my cooking stuff,,,in and out without disturbing the sleeping beauties hehe.

The angle of the porch door is such that you can clip it in and pull to tie back allowing cooking underneath with great wind protection, Stove sorted, coffee and porridge with a wee biccy under a still starry sky with a bright moon. Coffee on under the stars 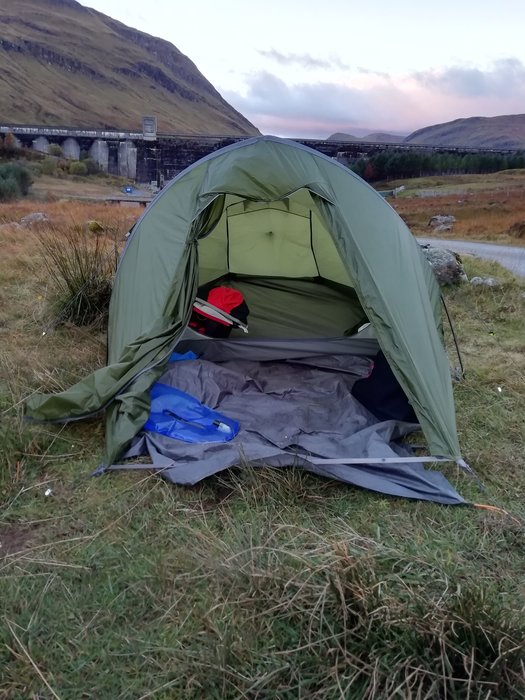 Packed up my sleeping bag/mat etc and just killed time until Heather and Lynne showed their faces. Struck camp and decanted what i didn't need in the big lightweight bag back into the van. By now, cars were starting to vie for parking spots, in fact, there was now a van parked where i had been camped on the grass and others arriving every other minute.

I had first climbed this hill with Margaret way back in 2013 and remember having a lot of knee issues after the steep descent so i was wary of this again. Climbing the gate over the bridge and off up through the trees to the dam, we could see people up on the steep section and higher up on the ridge itself.

Nothing to faze you on this hill, a good path, although a little water logged in places, we wandered up, chatting to some people already on their way down to head over to the second Munro. We then questioned why we had carried our lunch etc with us when we would be back at the car at lunchtime lol.

The path across the hill becomes a straight up stream bed but easy progress up to the lesser gradient and the fence line. Approaching the ridge with the sun making a break through Striding out towards our goal Horsing around with the summit off in the distance

The views were great in the middle distance, further out the cloud levels hung a little lower but as we wandered around the majestic ridge, we could see the lower stretches of the Big Bookil and the Glencoe hills. As we moved on to the summit, these views opened up and we could then see the Aonachs with a cap of snow. Reached the summit in just over 2 hrs of leisurely ambling and horse impressions. Took some pics and found as sheltered a spot as we could in the stiff breeze. 40-45 mins just chatting, soaking up the views. Layered up a bit as the wind was a tad icy. Summit with the Big Bookil way off in the distance The snow covered Aonachs and CMD, with Nevis lurking under cloud to the left Mapping the surrounding hills before heading off the summit

More and more people were approaching the summit as we packed to leave and on looking back down to the ridgeline, there must have been a couple of dozen people visible. Apart from Ben Nevis and Ben Lomond, I don't think I've ever seen so many people on a hill.

Took our time on the descent, the weather was great, just enjoying the day.

The descent down the steep section above the boathouse had been niggling at the back of my mind due to the knee issues on my previous visit. Not to worry though, i nipped down it fairly confidently and with no issues at all. My first visit here was Munro 35, so I'm putting it down to possibly not as hill fit then as I was now. On the descent with the dam and cars in the distance.

At various points during the day, we were amazed at the number of cars parked in the area around the dam. I counted over 40 at one point with people and dogs beetling across both hills all morning.

Back to the van and time for a scone and a cuppa while enjoying the views. We had got lucky with the weather as it was not forecast to be this dry for this long, the wind was chilly but otherwise, a great day. A well earned cuppa and scone

Back to Killin, a wee 5 min chat there before Lynne and I headed South and Heather West.

Thanks to the ladies for a good wee catchup and here's to the next. Now to test my lightweight gear in earnest on my Summer ML course exped next week.

Great report 😀 at least I don’t have to drive that road again!

Look like you had a lot of fun
Hope the ML expedition goes well.