Apologies for something of a Blast from the Past - I'm only now getting round to doing some WRs from a couple of months ago.
I'd taken an annual-leave Thursday in early August for a bit of walking, but I had some family commitments on the Wednesday evening and the Friday, so it had to be a day trip of some sort. However, given an unexpectedly fine weather forecast and after all the frustrations of the first half of the year ('nuff said

), it surely also had to be Munros

... but I was getting close to the 200 mark, a tally that I frankly never dared to aspire to just a few years back, so all my still-to-do Munros would really be pushing the limits of the day-trippable now. To compound this, I don't much like cycling in to the start of a walk: partly because I'm a bit rubbish on a bike with a rucksack, and also because I've been wary of bike carriers ever since one did quite a bit of damage to the paintwork of a car I had back in my relative youth.
After a lot of pondering, I just bit the bullet, got up really quite early on Thursday morning, and drove up to the Linn of Dee car park to tackle those two doughty back-country Gorms, Beinn a' Chaorainn and Beinn Bhreac, sans bike...
It was a beautiful morning (the Cattle were Standing Like Statues; the Corn was As High as A Elephant's Eye, et cetera et cetera et cetera There were several other parties both in front and behind me, although most of them subsequently headed west rather than east after Derry Lodge, presumably off to bag Carn a' Mhaim or Ben Macdui. Here's a nice shot of the Bonny Blooming Heather and some adolescent Scots Pines, with a Man and Dog ahead in the middle distance: One of those Big Hairy Caterpillar moments that I love so much! Species, anyone? On the way out, despite the lack of bicycle, it really didn't feel like that long before Derry Lodge came into sight (it would be a different story on the walk back, needless to say

!). I crossed the bridge over the Derry Burn, then turned right on the reasonably good ongoing path that heads east then north, up the western side of Glen Derry. More beautiful ancient pinewoods to admire: 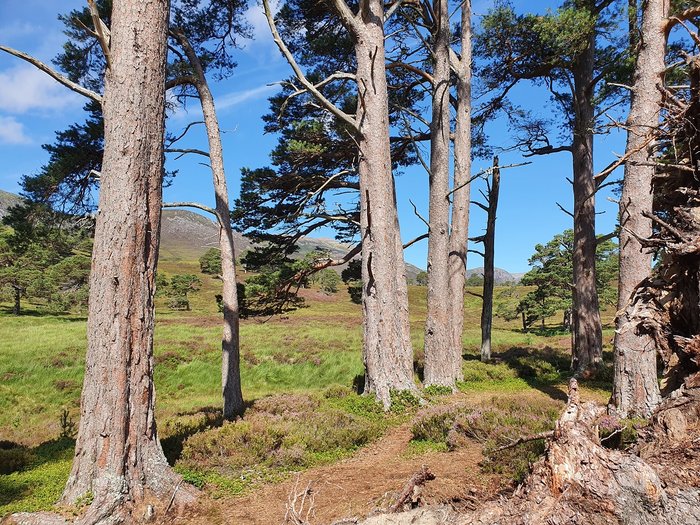 Things were looking up: a different species of Big Hairy Caterpillar

! I think this one is a larval Hawk Moth; I've seen them before and they are definitely quite impressive It's rather a long walk out to the base of the first Munro, particularly as I'd chosen to do the walk clockwise (rather than widdershins as on the walkhighlands website's route description), tackling Beinn a' Chaorainn first. This was mostly because I thought it would be easier psychologically to get the higher and further-away hill bagged first; on the whole, I think this was probably the correct decision. Despite it being a bit of a trudge, the scenery just got better and better. Before long, the very impressive Coire Etchachan came into view to the northwest: A Lonesome Pine, and yet more Bonny Blooming Heather: as you can tell, the fine morning really had me singing by now! A closer look at the vast and impressively precipitous Coire Etchachan: The approach path here is in fact the southern part of the ancient Lairig an Laoidh ("Pass of the Calves"), an old drovers' road that finds an easy though somewhat tortuous route north-to-south through the Cairngorms Plateau. The West Glen Derry path eventually crosses the Glas Allt Mor (a tributary of the Derry Burn that can apparently sometimes be tricky to cross, but which was a doddle in today's dry weather) to top out at the Pass of Ryvoan and then to descend to the Fords of Avon, and onwards north from there. For Beinn a' Chaorainn, however, I left the path just before its high point to head up the steep, pathless but heathery slopes to the east. It was a bit of a grind, but it wasn't actually that much ascent before I topped out on the high plateau of the Moine Bealaidh ("The Broomy Moss"), with a fine view back west towards Coire Etchachan and the impressively reptilian spiny backbone of Beinn Mheadhoin, a.k.a. Gormzilla, which is very definitely my favourite Gorm to date. It wasn't too much further to Beinn a' Chaorainn's well-built summit cairn, from where there was another grandstand view of Beinn Mheadhoin. Like all large reptiles, it really seems to enjoy basking in the sun on a fine day Looking south-west, towards Ben Macdui (I think) - thankfully no Grey Man in evidence! The second Munro, Beinn Bhreac, was clearly visible to the south now, across the Big Bad Moss. It really doesn't look that far when viewed from this angle. Needless to say, however, that was very much a trick of the light: this is a foreshortened view, and (as all the Munros guides warn) it's actually a rather long and boggy trudge Yet another contribution to the ever-expanding genre of Summit Selfie in Unfortunate Hat .... On descent from Beinn a' Chaorainn, I soon picked up a bit of a path, which helped initially. Lower down, however, it headed in the wrong direction, i.e. southwest when I wanted to go southeast. Presumably this must be an approach path that I'd missed on the way up, heading back down towards the Lairig an Laoidh All the Munros guides advise heading well eastwards on descent from Beinn a' Chaorainn, so as to avoid some "difficult terrain" (for which, read "Peat Bog Hell") due south of this hill. I soon had a panoramic view of the Difficult Terrain in all its glory Thankfully I was able to avoid the worst of this by traversing well eastwards on descent, and in fact, although it definitely had a few squelchy moments, the Crossing of the Big Bad Moss turned out not to be nearly as bad as I'd feared. In fact it was a surprisingly attractive landscape in its way, with an impressive array of different species of sundew, exuberant frogs hopping in all directions, and a variety of other wetland flora and fauna. The sun was still shining, and on the whole it was still a grand outing, despite occasional wet feet.
About halfway across now, with Beinn Bhreac looking closer now, and even a bit of a path starting to appear. Looking back towards Beinn a' Chaorainn, with a corner of Beinn Mheadhoin slithering into the frame in the distance: A better view of Beinn Mheadhoin rearing its scaly back in the distance, with Beinn a' Chaorainn to the right: After becoming very indistinct at a final boggy narrowing, the path re-emerged on the way up Beinn Bhreac, eventually providing a very easy uphill stoat to the summit of the second Munro of the day. Yet another view of Gormzilla, this time from Beinn Bhreac's summit cairn: ...And a different dinosaur, as viewed from Beinn Bhreac's summit cairn. There was an interesting view eastwards, towards Beinn a' Bhuird's pancake-flat but intriguingly vast summit plateau: These would be my last photos for the day, but the walk was by no means finished. In fact, despite a pretty clear path all the way from Beinn Bhreac summit, it seemed a VERY long way back to the Linn of Dee car park, firstly southwards to skirt the minor top of Meall an Lundain, then cutting southwest to descend steeply on a very muddy path back into Glen Derry, then back to Derry Lodge via the recently re-wilded East Glen Derry path, and then the long, long track back from Derry Lodge to Linn of Dee: by this time I have to confess that I was something of a gasping wreck by the side of the path, wailing "a Bike, a Bike, my Bobble Hat for a Bike!"

....
Sadly, no bike was forthcoming, and I had to walk all the long and weary way back to the car park, followed by a long drive back south to Glasgow to arrive home fairly late in the evening.
Very definitely pushing the limits of the day-trippable, then, but nevertheless another Grand Day Oot, and a couple of awkward Gorms in the bag at last

Emperor moth, I think - only one I do know!