Space. A word that can mean different things and a concept that dwelt in my thoughts all day as I rambled around the Moine peninsula in the far north of Sutherland.

Daylight was just coming in as I crossed the Kyle of Tongue. Ben's Loyal and Hope stood cloud free; off in the distance, undistinguished by comparison, lay Ben Hutig my planned 'bag' for the day. The Moine is part of that wonderful wilderness that is the Flow Country. In the near distance I could see the trig point of Druim nan Cliar. An unremarkable summit of 262m it makes a fine viewpoint.

I strode out over a land that is as much water, bog and lochan. Ben Loyal, Ben Hope, Ben Stumanadh, Foinavon, Ben Klibreck, Ben's Griam, Ben Hutig and Morven all clear and visible, so too the high cliffs of Hoy, Orkney.

A huge expanse of space. Once upon a time a day, and a hazardous one, would be needed to cross the Moine. From the trig point I watched a car then campervan whizz across the unseen road. The stillness was sublime, all sound is drawn into the peaty blackness of the flows. I made my way back to the car and on then to West Strathan. The day remained overcast at a higher level with a true feel of autumn. There was time to admire the season's reds of rose hip, rowan berry, bracken. Even the rusted cars (beloved of the north) harmonized with their surroundings.

A wet track took me well on the way to Ben Hutig. I believe I was crossing part of the site of the planned rocket launch base. It seemed incongruous in this open wild landscape that has been slowly forming for thousands of years. Larkin's words entered my thoughts: 'Most things are never meant. This won't be, most likely....' As I climbed the views only improved. A young stag kept watch of me, his fellows bellowed far in the distance. The track ended but the going was never bad. Approaching the top with it's easy crags the ground became stonier, a great expanse of land and sea was visible.

The summit trig of Ben Hutig stands in its dry stone enclosure with a curious structure of similar construct nearby. Perhaps the remains of the surveyor's camp? I unpacked my jam pieces and absorbed the solitude. A cargo vessel made it's way, at stately pace, east towards the Pentland Firth whilst sunlight touched a distant Hoy.

Then thunder: man-made. Huge rumbles filled the air from the direction of Cape Wrath as the live firing exercise Joint Warrior continued, I could see a frigate in the distant north west. Before long this place too will facilitate mans technological obsession....

Steadily the light improved and as my eyes accustomed I could make out a very distant island. North Rona? It seemed unlikely but I could not think of where else it could be.

Eventually -as always - it was time to go. Another hill 'bagged' but it's never just that. It never could be. 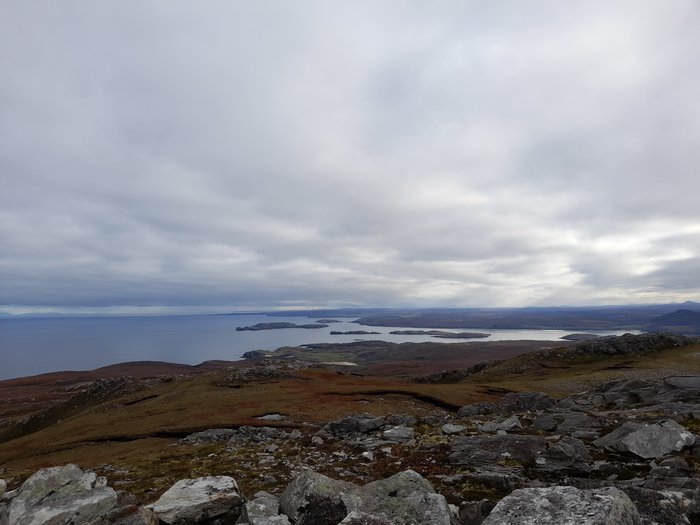