The MWIS Tuesday video mentioned possible inversion conditions for the weekend and the rest of the week was a tense wait to see if that would remain the case or if it would suddenly just turn to clag, as so often seems to be the case. By Thursday I had decided that it was all going to pot as the MWIS and Met Office forecasts were OK but weren't making any mention of inversions. I almost decided to not bother but come Friday evening, I eventually decided to go for it when it looked like a good forecast for the far west. I nearly decided on the as-yet unbagged Beinn Fhionnlaidh or Beinn Sgulaird, but decided that more height was needed for the best chance of an inversion, so settled on Bidean nam Bian. Turns out this was the correct decision!
I managed to leave home a wee bit early and trundled my way up the A82. I started to get a bit worried that I had left home too late as the bookle car parks were all full already, but luckily the big car park opposite the 3 sisters was surprisingly empty. Boots on and off I went up Coire nan Lochan. It was a wee bit chilly but fairly clear around the lower end of Glencoe, so it seemed from the start that I was going to have a special day. I started to get into some clag as I neared the end of Coire nan Lochan, crossing the burn and heading off up to the right to reach Stob Coire nan Lochan's north ridge. As I reached the ridge, the view opened up and there was a great inversion, with raggedy cloud covering Aonach Eagach and Ben Nevis looming over the other mountains poking through the inversion to north, Beinn a' Bheithir looking grand to the west, and the Buachailles also poking through to the east. Then as I got closer to other side of the ridge, I got a great brocken spectre. Brocken spectre with The Ben lurking in the background Eventually I put the camera away and set off up to Stob Coire nan Lochan. The scrambling along this ridge is fairly gentle but fun enough. I suppose my last walk was up the Cuillin so everything seems gentle in comparison! I was surrounded by amazing views of the mountains peaking through the inversion all the way up. Views back while heading up SCnL

I didn't hang around too long on Stob Coire nan Lochan and set off to Bidean nam Bian. As it's "only" a top I was a bit surprised at how much down and up again there was here - remind me why SCnL isn't a Munro again? I stopped for a sandwich at BnB's summit and sat for a while taking pictures and enjoying the views. Managed to snap some photos of others on the summit of SCnL, I do enjoy having people in a photo to give a decent sense of scale! Looking back to SCnL Human and dog on SCnL Eventually headed off after I started to get chilly and the clag seemed to be thickening, but I could see a few people on the summit of Stob Coire Sgreamhach, which seemed to be staying clagless. As I climbed, I got even more, better brocken spectres, and then at the summit I sat for a while waving my arms like an idiot to make the spectre dance Clagging up a bit but can still see folk on SGS...fingers were firmly crossed that it would stay that way 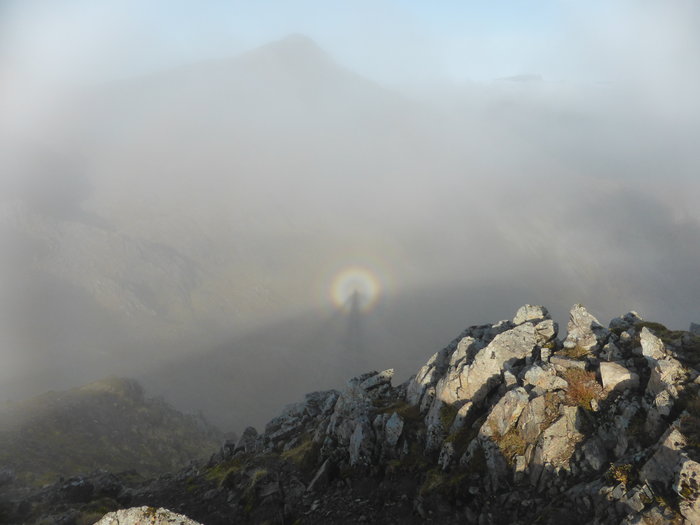 More fun with brocken spectres at the summit of SGS There was a really bright outer ring to the brocken spectres too!

Eventually it was time to descend down to the lost valley. This is not my favourite descent! Luckily I find no shame in a bum shuffle and I was quickly down in the crowds. The clag seemed to disappear as soon as I had left the ridge and it was suddenly a glorious, sunny day. I got back to the car feeling quite pleased with myself at having whizzed round in 5.5h - I normally walk at around the faster end of the Walkhighlands estimate! A helicopter slew over at some point towards the end, and as I drove past I saw Mountain Rescue and ambulances at the Buachaille Etive Beag car park - hope all turned out OK and well done to Mountain Rescue!

Track_2020-10-17 141144.gpx Open full screen  NB: Walkhighlands is not responsible for the accuracy of gpx files in users posts