All you purists who don't approve of cycling to the foot of a Munro are basically wrong about this one! And anyway we had a boat to catch. This hill is ideally set for a "bike and hike" as there is a good tarmac road for several km up Glen Fyne.
We were on our way to Islay to see Granny for the first time since last Christmas. We weren't allowed to stay in her house, due to Covid regulations, but fortunately had been able to borrow a house two doors away for a few days. I was working on Monday morning (due to not having enough holiday left for the full week) so we left Yorkshire in the mid-afternoon aiming for the Stagecoach Inn at Cairndow. We reckoned we needed to get past the Rest and Be Thankful which has been beset by landslides and roadworks this year, even more than usual.
Cairndow Inn had probably the most comfortable bed I have ever slept in. The full Scottish breakfast set us up nicely for a day in the hills. We parked up in the car park on the West side of the river Fyne, unpacked the bikes and set off up the glen at about 9.20am. This was a lovely ride despite being into the wind. It's a nice smooth road nearly all the way and it was a fine clear morning with high cloud. The forecast was for the occasional shower but mostly clear with sunshine here and there, although we were told it would be cold and a strong breeze on the tops.
About 40 minutes later we were parking the bikes at the gate where there is a rail provided for the purpose. Following the track through the woods the autumn colours were gorgeous and we were in good spirits. 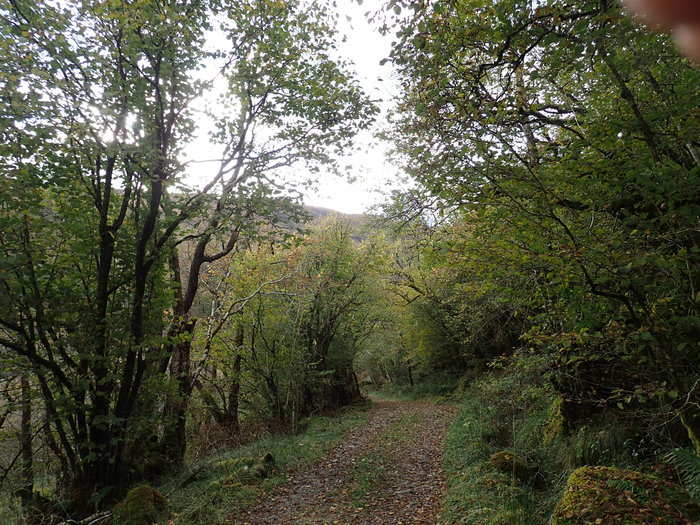 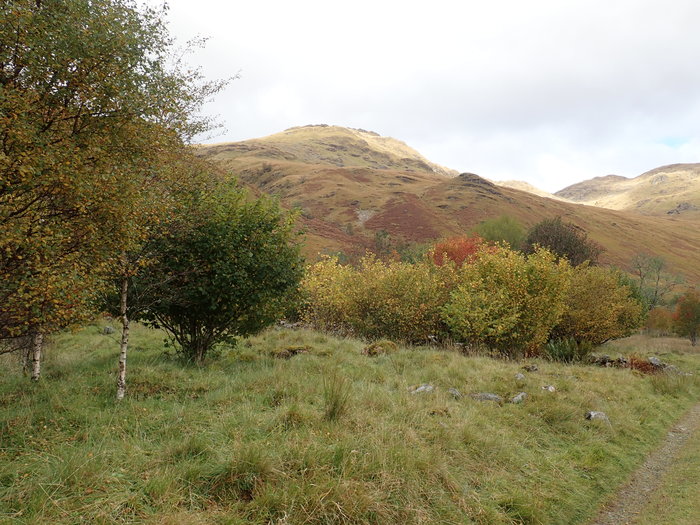 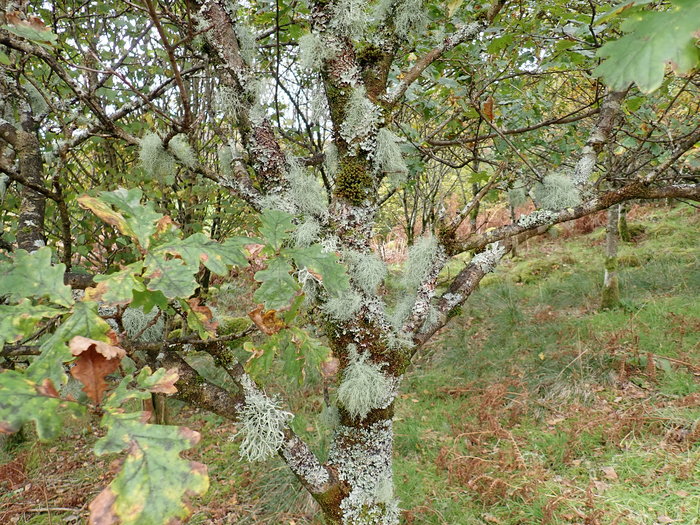 Lichen and moss on an oak tree

After about a kilometre the track reaches Inverchorachan, where you pass the old house and go through a second gate. We followed the WH route turning left straight after the gate and going up the path on the south side of the gorge of Allt na Faing. This was indeed steep, but the sun was shining and there were lovely views.
There are a few hands on bits as you go up, but nothing too difficult. We reached the awkward bit and found it not too bad really. The rock was not slippy, although it looked like it might be, there was a bit of a lack of really reassuring handholds, but good places for your feet and once we went for it we both found it was ok. toadstool. AKA I need a breather 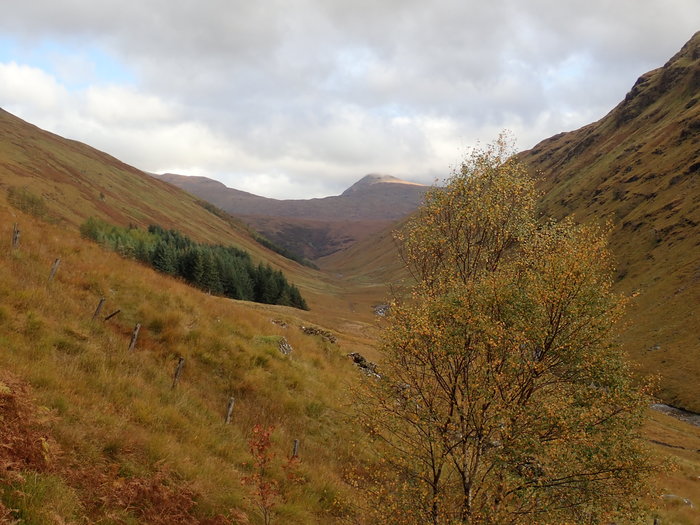 and up. Ben Oss at the head of the glen coming up the gorge, heading for this lovely corrie with a big cliff and waterfall at the head some bright fungus, obviously I need another breather we're climbing out of the corrie now At about 530m the path comes out of the corrie and the slope eases considerably. It crosses a recently made hydro track which is a bit of an eyesore but I daresay it will mellow out over the next decade or two. It would be another possible route up and down if you wanted to avoid going up the steep gorge but then you would miss out! The terrain is pretty messy and lumpy but the path finds a nice route up and then you come over a little horizon and there in front of you is a small dip and then about 130m of pretty steep ascent. the sting in the tail now visible

Coming up here was hard work but it was also a treat. After the rain of yesterday the path was running water and the sun was shining behind us and the water was sparkling with glitter from all the little bits of sparkly mud suspended in it. The rocks here are multicoloured and sparkly and the whole effect was magical. I tried a photograph but it didn't work unfortunately. 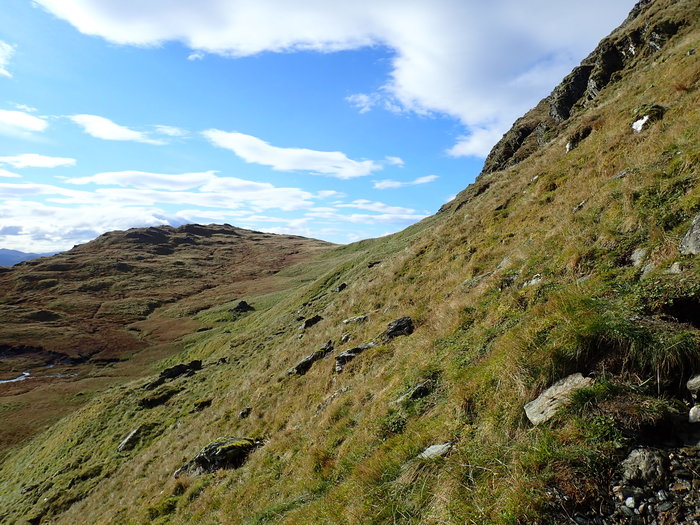 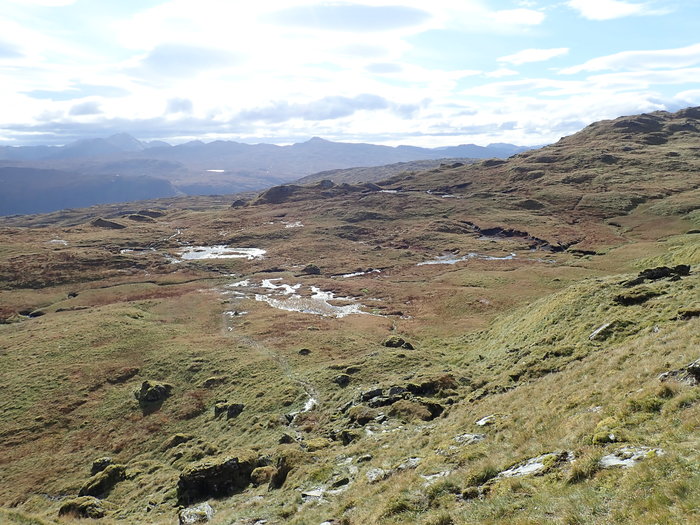 and the views are tremendous

Reaching the ridge revealed a view over to Cruachan and the pass of Brander. It was windy on the ridge but there was only one small part where eddies of wind made it a little bit of a struggle, mostly it was fine.
We reached the summit around one o'clock and the views from here were just tremendous. We didn't really have time to hang around though, as we had a boat to catch, so we retraced our steps to the bealach where we had arrived on the ridge and stopped here for a brew and quick lunch, out of the wind and in warm sunshine. and here's Rudolph on the summit, behind him Loch Awe, Cruachan and the Pass of Brander 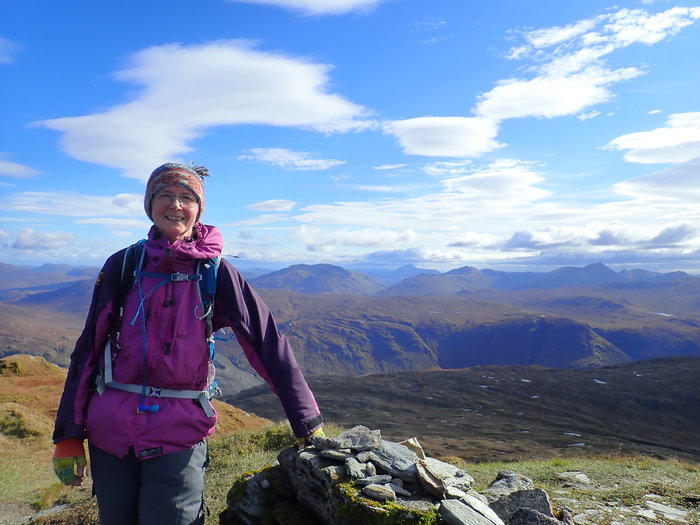 and me. To my right, Ben Vorlich, then Ben Vane with the long ridge coming towards us, then Ime and friends. Behind them is Ben Lomond The distinctive twin peaks of Ben More and Stob Binnein with the other Crianlarich hills in front; you can see the long ridges of Cruach Ardrain and an Caisteil Ben Lui, left, ben Oss right and behind them Mamlorn hills i am not 100% sure which Happy Mugs waiting for the kettle to boil, with Cruachan and neighbours behind

From here the path continues on the north side of the ridge to another broad and boggy bealach a short distance further on, then we came down the grassy slopes back to Inverchorachan. the path to the next bealach. Looks a bit wrong but it is right enough

There are traces of path near the top which come and go, then consolidate into a muddy path which takes you across two rather strange stiles with dog gates, and back to the glen floor. It's steep and from time to time there are rocky outcrops that have to be circumvented but no real difficulty here. lovely colours in the afternoon sunshine the first of the strange stiles with dog gate The walk back to the bikes gave our legs the chance to recover from the steep downhill, and then the ride out on the bikes was fantastic, with the wind behind us it took only twenty minutes! We were in good time to pick up some fish and chips in Tarbert before arriving at Kennacraig for the six o'clock ferry to Islay.

BB is very underrated imo, it’s many years now since I was last there ( in my purist years ) so I walked, took me 8:00 hrs all in. Loved the wee bad step that much I returned the same way.

Bheinn Bhuidhe was my 2nd munro and the one that absolutely captured my enthusiasm for this hobby. I loved every minute of the walk, great to see these photos!

gammy leg walker wrote:BB is very underrated imo, it’s many years now since I was last there ( in my purist years ) so I walked, took me 8:00 hrs all in. Loved the wee bad step that much I returned the same way.

we were so pleased to have a clear day for it. I have noticed that we have got a little slower in recent years, I expect it would have taken us a bit longer than 8 hours!

jayedubya73 wrote:Bheinn Bhuidhe was my 2nd munro and the one that absolutely captured my enthusiasm for this hobby. I loved every minute of the walk, great to see these photos!

Thanks. I thought it was a lovely hill, bit of everything and views in every direction.

Thank you, I love a good bit of fungus, and especially since the wild flowers are practically finished.

Huff_n_Puff wrote:Thanks for this - Behind Bhuidhe is a joy still to come - next year now since i live at the other end of the country

I hope you get a lovely clear day for it.