Ben Lawers on a glorious Autumn day
From Perth drove the Logiealmond to Amulree then Glen Quaich pass to Kenmore which was a great start to the day with the sun rising behind me.Car Park just about full by 9:00am so a busy hill. However decent sized gaps emerged between the various groups and solos, and no large groups. Even the many dogs seemed reasonably controlled. A glorious day with sunshine and blue skies and white clouds. Many expecting cold were removing jackets early on.
WH route easy to follow and with such clear path it would take talent to get lost on this walk. In many places the path offered a choice between hard stony track or softer ground. No real bogginess to contend with as lower slopes within the nature trail has board walk provided. Most people headed over Beinn Ghlas on the way up, but a clear path to left beside large rocks marked the way to avoid this first Munro. Lots of rocks to have a breather on, and good passing places if walkers were concerned about Covid, Did not notice anyone masked, and as many would touch the trig point and viewfinder - now with no views listed on it - and gates through nature trail- then probably would make little difference.
Definitely worth taking in Beinn Ghlas as the first view down the broad Bealach back up to Ben Lawers is superb. Daunting to a few as they settled for only Beinn Ghlas. However the climb to the second summit was not that bad and certainly worth it, a little mild cloud settling on the bealach but not thick and not damp. Jackets still not needed. From summit the views any clear day would be great, but today the clouds beneath the summit rolled by slowly and looked simply stunning. Sometimes obscuring the view of Beinn Ghlas then letting the top sneak through. Other low level clouds enhanced the views all round. People were congregating for quite a while reluctant to leave the fine sight. Back down the hill to the pass, where most were taking the clear route along and down the side of Beinn Ghlas rather than taking the uphill again. That path was worth doing in its own right with fine views of the valley and the sounds of gurgling burns. In some ways it was an easier path to walk on with fewer rocky steps than the inward route. Suited the two guys who had carried their bikes to the top. Also the two runners who passed me.
Lower, another clear path turns off to the right to climb Meall Corranaich which had walkers on the top although no one seemed to be doing it from Ben Lawers. Ghlas and Lawers were enough for me for a fine day. A day which made you reluctant to leave. Track rejoined inward route, and straightforward back to now much overflowing car park. A good day for not hurrying took me 2 hours to Beinn Ghlas peak and another 45 minutes to Ben Lawers. But I am getting older and lockdown heavier. Unsurprisingly much quicker on way back. 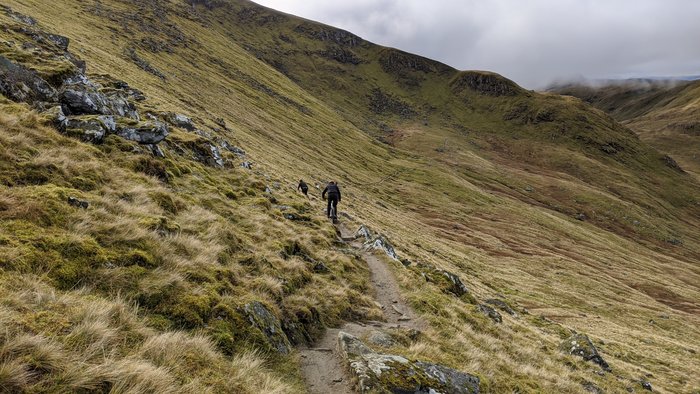 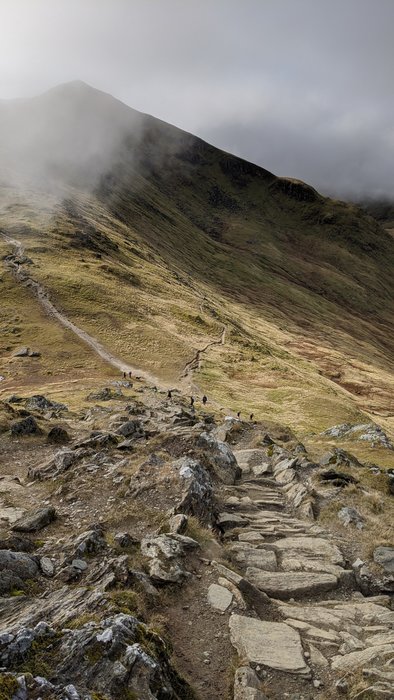 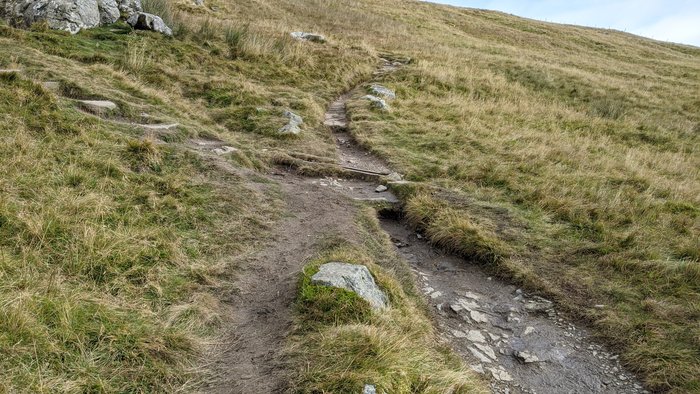 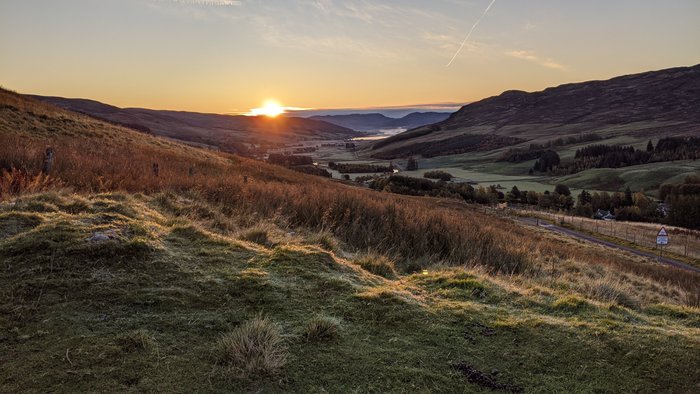