...With apologies to the Chewin' the Fat team (and possibly everyone else) for the WR title.
Like almost everyone else in Scotland this year, I've found myself with my original summer holiday plans kiboshed

. One unexpected silver lining of this, however, was that we instead found ourselves in a cottage in Strathpeffer for a week's cobbled-together but unexpectedly enjoyable "Staycation" in late August ... which of course provided the opportunity to have a look at some Munros in the area.
After a rather wet start to the week, the forecast for both the Wednesday and the Thursday looked quite promising

(despite, bizarrely, a Named Storm being forecast to blow in and straight through overnight BETWEEN the two good-weather days!). I was getting tantalisingly close to the Two Hundred Mark in my Munros tally, and I wondered whether, with the wind behind me and if the Force was with me, I might just manage the eastern four Fannaichs on the Wednesday and then the central three on the Thursday, which would just get me to the magical 200 figure (something that I'd pretty much written off as impossible earlier this year

).
I therefore had an early breakfast on the Wednesday and set off on the fairly short drive west to Torrandhu bridge on the A835. There is a reasonably big parking area just north-west of the bridge. What I hadn't bargained for, however, is that the Torrandhu car park appears to be the Home Planet of the Scottish Midgie

... I swear there is clear evidence that they've developed a highly technologically advanced civilisation in this vicinity, complete with sophisticated surveillance systems, tactical nuclear weapons and the like

... The air was black with them, and I hot-footed it off on the rough path southwards down the west side of the Abhainn an Torrain Dhuibh (having neglected to read the website's updated route description before setting off, which describes an altogether drier and more pleasant initial approach on forestry tracks a bit to the east of the Torrandhu bridge

).
Before long, however, I had at least outrun about 98 per cent of the midgies, and there was indeed a swatch of some distant Fannaichs to get the pulse racing 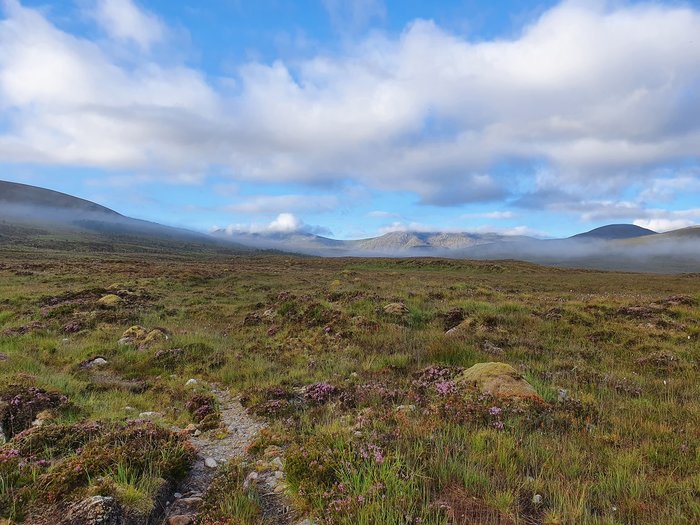 After crossing the Allt an Loch Sgeirich, largely with dry feet, I took the continuing even rougher path on the west side of the Abhainn a' Giubhais Li for a short distance, before heading west up the poorly defined eastern ridge of Creag Dubh Fannaich, which is an eastern outlier of the first target Munro, Beinn Liath Mhor Fannaich.
A view of Creag Dhubh Fannaich, the "Black Crag of Fannaich", on approach: Despite its somewhat intimidating name, Creag Dhubh Fannaich yielded fairly easily to a bit of resolute plodding, and soon enough I was at its small but perfectly formed cairn, with Beinn Liath Mhor Fannaich and a cloud-topped Sgurr Mor visible in the near distance: It was stirring scenery, and provided a fine distraction during the ongoing plod down to the minor bealach and on up to the summit of Beinn Liath Mhor Fannaich (the Big Grey Hill of Fannaich), the first Munro of the day. Its name really says it all: it is indeed big and grey,with its summit environs being covered in quartzite boulderfield, although on the whole the going was better than it initially looked. There were some fine views, including this one looking south-east with a glimpse of (I think) Loch Li: I think this view is looking west to a distant Loch Broom (plausible enough I think, since I'd driven up that way the day before, and Sgurr Mor and pals are easily visible from up there): Sgurr Mor is without doubt the finest hill of this eastern group of four, and the only Marilyn (none of the others have the required 150 metres of relative height to qualify as Marilyns), so it was a slight disappointment to see that it still had its head in the clouds at this point. I headed off gamely in the general direction of Sgurr Mor, enjoying a brief break in the Clag on approach which provided a glimpse of Sgurr Mor's sumit and a lovely view of Loch a' Mhadaidh in the distance: This route is blessed with a surprising number of extremely scenic wee lochs. This one was Loch an Fhuar Thuill Mor, I think ("Loch of the Big Cold Hole"?... which has a nice ring to it): This part of the route follows a clear stalkers' path, which makes the ascent of Sgurr Mor much easier than it would otherwise have been. Just short of the summit, I found this rather cute stone shelter, presumably built by those stalkers: just about room for one person inside! At Sgurr Mor summit at last. The Clag was coming and going, but I did manage this hazy view back east to Beinn Liath Mhor Fannaich: And looking westwards, with (I think) a hazy view of Loch Broom in the distance: 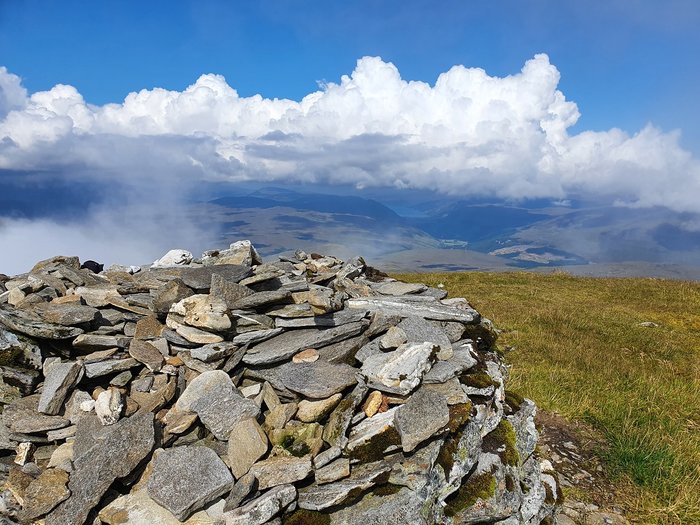 Me at Sgurr Mor summit, in my brand-new and unfeasibly expensive sun-hat, purchased the day before in Ullapool: It's a bit of a traipse south and then south-east from here to the third Munro, Meall Gorm ("the Blue Lump"), with an intervening top, Meall nan Peithrean, en route. The route to Meall nan Peithrean crosses a strange landscape of wee grassy terraces, which were apparently formed by glaciation in some way (I'm not sure exactly how) during the last Ice Age. When I eventually got there, I found Meall nan Peithrean sporting its own wee cairn, but unfortunately with its head resolutely in the Clag. 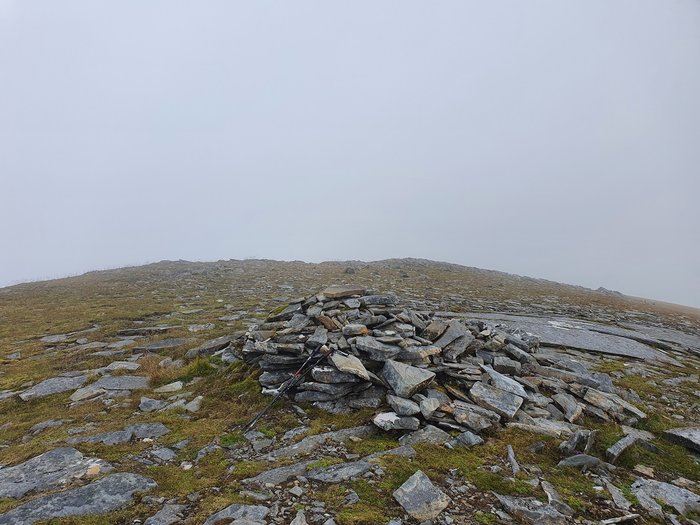 I then made something of a Fannaich of myself by following the wrong rounded ridge onwards from Meall nan Peithrean in the Clag, briefly finding myself descending southwards towards Loch Fannaich on the Creag a' Choire Riabhaich ridge ...
The Clag finally lifts, and - oh oopsy, I'm headed straight towards Loch Fannaich! I immediately realised what I'd done, and had to back-track a bit, thankfully without losing too much time or distance. I did at least get some unusual angles on the surrounding hills. This was Meall Gorm, my next target (if I could manage the navigation more competently this time

), with a fine vista of the east end of Loch Fannaich in the background: Looking westwards towards Sgurr nan Clach Geala I think, with its head in the clouds: I thankfully managed to get across to Meall Gorm's summit cairn without further incident, and was delighted to find it temporarily Clag-free! There was a grand view back westwards to Sgurr Mor and Beinn Liath Mhor Fannaich: 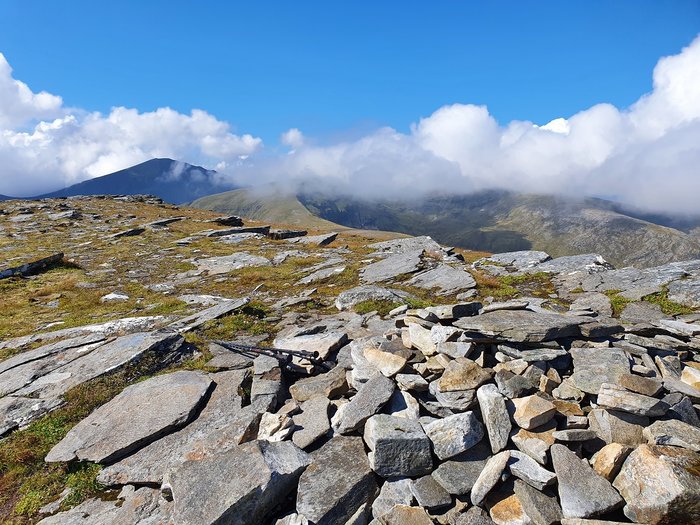 I headed off eastwards towards the Bealach Ban, between Meall Gorm and the final target Munro of the day, An Coileachan ("The Wee Cockerel"; another pleasingly named hill

). Unfortunately however, the weather was turning: the forecast was for a named storm no less, Storm Ellen, to sweep in overnight, and its vanguard clouds already seemed to have descended on An Coileachan I wasn't intending to head home until the fourth Munro was in the bag, however (in truth, it would have been much more awkward to have avoided it than to have gone over it), so I plodded on uphill into an ever-strengthening wind. It was quite a relief when the cairn eventually came into view, perched rather dramatically on a rock outcrop, rather like a ... wee cockerel?? A final Summit Selfie in my fine new hat, trying to avoid it being blown away: I headed steeply downhill on pathless grassy slopes due north, towards Loch Gorm. Eventually I reached the cloud base, and there was the loch right enough, looking very scenic in fact, with yet another wee loch (Loch Odhar) over its shoulder in the distance. As all the Munros guides warn, however, it is a long, rough and partially pathless trudge back from An Coileachan all the way back north to the Torrandhu car park. The first section proved particularly rough, down those steep, pathless slopes to Loch Gorm, then crossing some very tussocky and intermittently boggy ground on the eastern shores of Loch Gorm and then Loch Odhar. I don't think I took the easiest line to be honest, but at least it was probably the most direct one, and after Loch Odhar it was "just" a matter of making the boggy descent down to the Abhainn a' Gubhais Li, crossing it (wet feet, but I was past caring by now), then trudging east then north by the side of the Abhainn for what felt like absolutely ages, without much of a path at first but with one developing eventually .... then eventually reaching and crossing the Allt an Loch Sgeirich again, for yet more riverside trudging on the rough and boggy path back up the west side of the Abhainn an Torrain Dhuibh all the way back to the car park. I was very weary, rather footsore and extremely midgie-bitten by the time I made it back to the car.
This was a great walk in truly stirring scenery, however ... and four more Munros in the bag

Well done. Great effort and one for you to remember.

R1ggered wrote:Well done. Great effort and one for you to remember.

Thanks, yes, definitely one to remember (and mostly for the right reasons

)!
It's a very special landscape, this - all the wee lochs are what really stick in my memory

. Definitely worth the tough walk in and back out.