A few weeks ago now I ended up in Mid Calder by accident - I *thought* I was turning out of East Calder back towards Ratho, but I hadn't come into East Calder the way I thought I had. Anyway, it looked like it had some nice stone buildings in it, and it also turned out to be one of the ends of a nice walk through Almondell, so I decided to go back in a more organised way..

I suppose this was a bike-and hike after a fashion, just not the epic Malky and Jaxter kind - I started by cycling out along the canal as far as the carpark at Lin's Mill, where I'd also ended up that day (following a sign that promised me the Union Canal, and didn't tell me that I couldn't actually get to the towpath from there). Elevenses at Ratho, where I meant to stop at the picnic benches, but found I had to stop at this seat just before, as I've watched quite a lot of Sarah and Duck in lockdown... 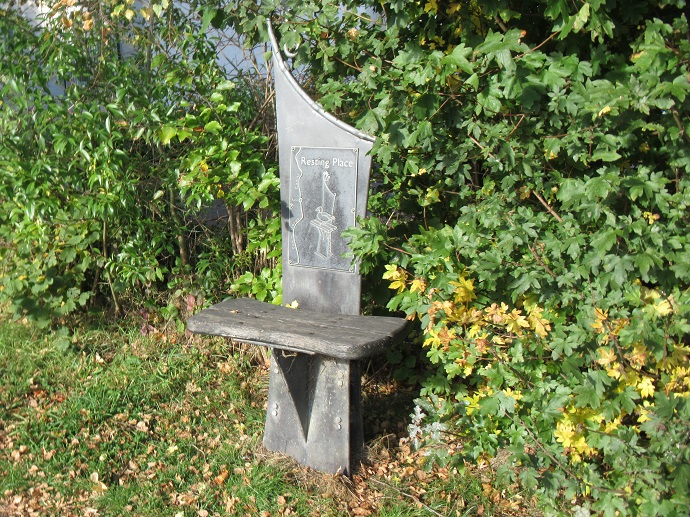 A bench to sit and think

Most of the canal side was still fairly green, and beyond that I almost felt that I was going through a tunnel of trees. 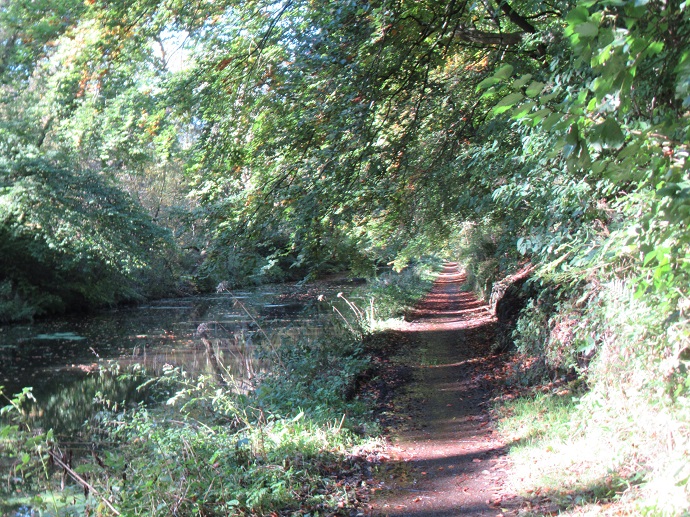 I came off the canal at the little bridge at Clifton Mains, to go along the other side and down to the carpark. It was lovely here, and I stopped to eat my lunch - although I'd hoped for a proper place to leave the bike, and ended up attaching it to the railings of the aqueduct itself. 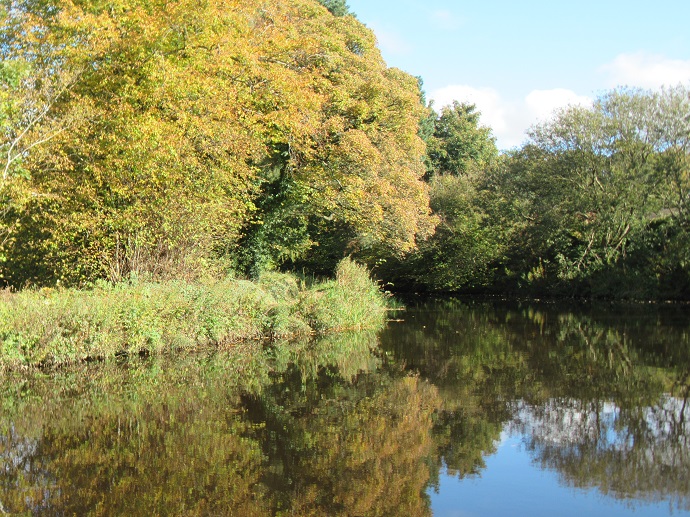 You don't really start following the Almond until much later in the walk, but it was looking very autumnal in its valley below. 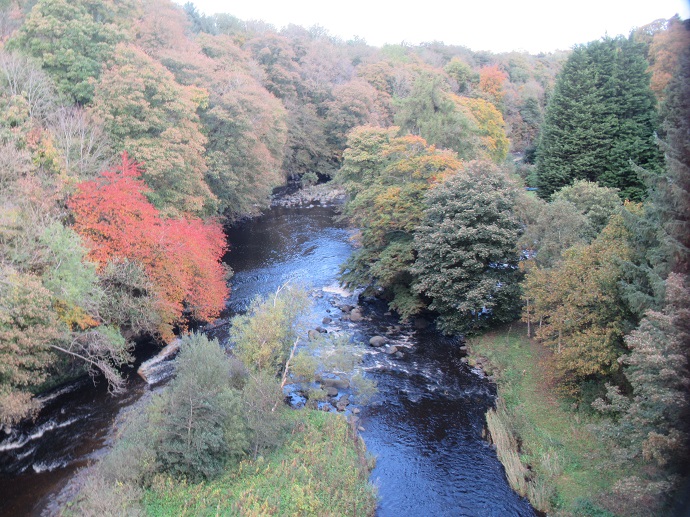 The Almond from above

From Lin's Mill I was doing the walk from the wrong end - under the aqueduct and along the canal, to turn onto the tracks and little roads which are the return route in the description. I turned the wrong way along the canal at first and started heading back the way I'd come - I knew I had to head northish, and I'd been heading southwestish before, so it made a kind of sense.

This leg of the route keeps well away from the river, and there's not all that much else about either - track which becomes quiet country road. One farm had a tiny house hiding among enormous barns, and another had some nice old stone buildings. 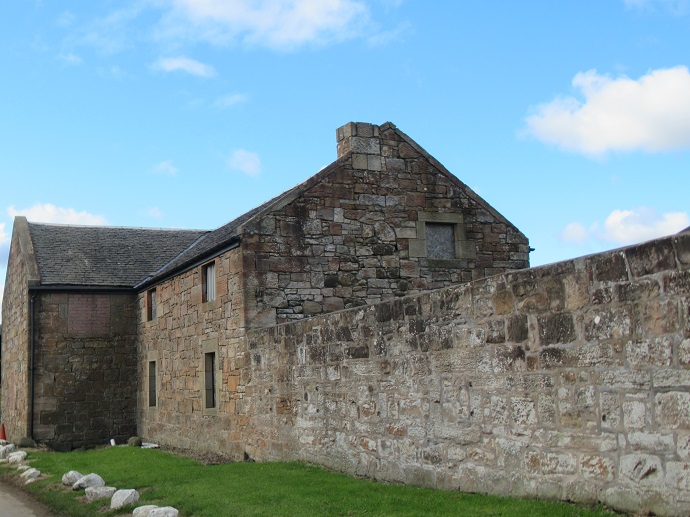 At a little crossroads I turned left into a very straight wooded stretch which eventually led down to the gatehouses of Almondell.

! had no idea that I'd ever been at Almondell before, but as I was walking down the road towards the visitor centre and wondering whether I really could have crossed the Nasmyth bridge when I went hunting down the solar system - the name seemed familiar, but the location didn't - I suddenly found this ahead of me, the Uranus sculpture. After that I realised that I knew all about the visitor centre, which is the stable block of the old house, and has the pillar giving the details of the original solar system model outside it, as well as toilets and ice cream and useful things like that.

The track wanders back down to the river before very long, passing the Nasmyth bridge and a more modern green bridge - some lovely autumn colours along the river banks. 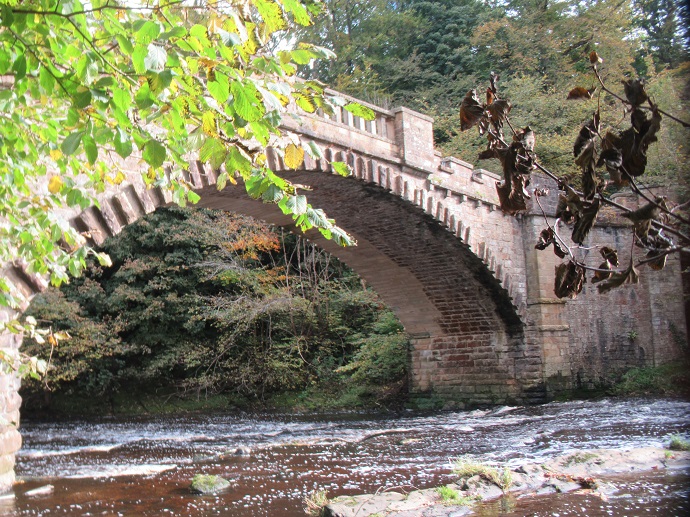 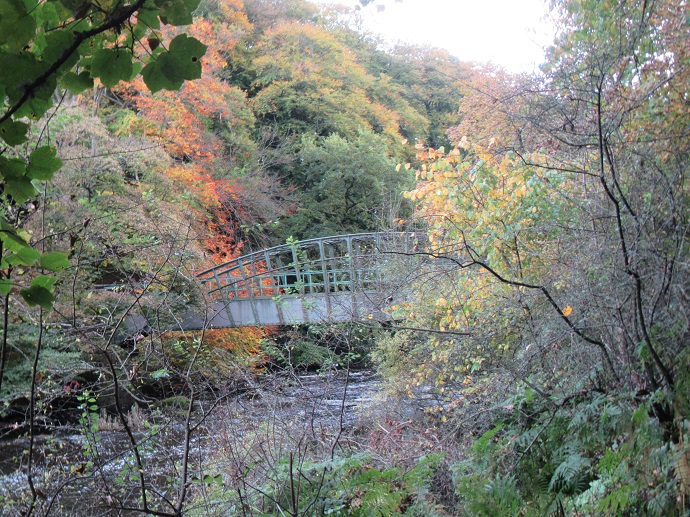 The next bridge is an under rather than an over - the very tall but now disused Camp viaduct, towering overhead. 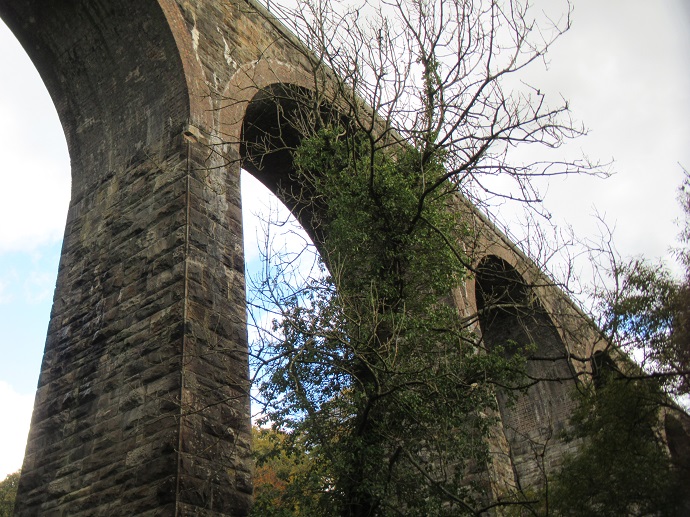 At this point the path is running between the river on one side and a little channel of water on the other - some nice effects of bright leaves above dark water. 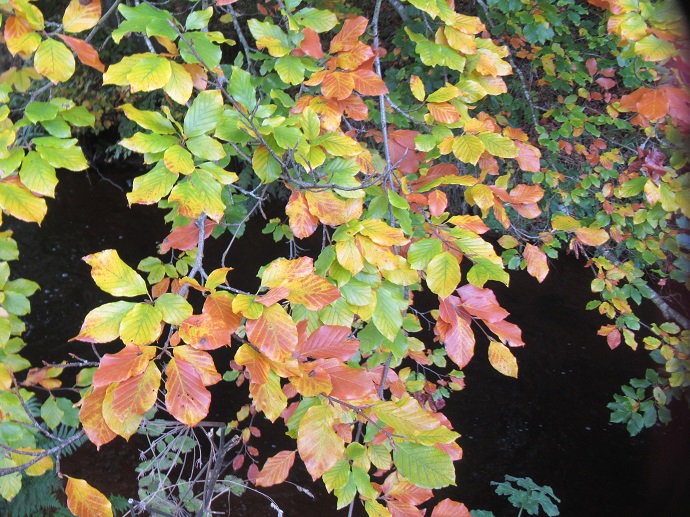 I could have turned back somewhere along here, because the last stretch was just an out and back into Mid Calder - but I did want to have a look at it, so I went on, past a long stretch of sewage works, and down a steep hill.

The village was pretty enough, although absolutely dead, but the view down into the Almond valley from the bridge at the start of the road to East Calder was worth the walk. 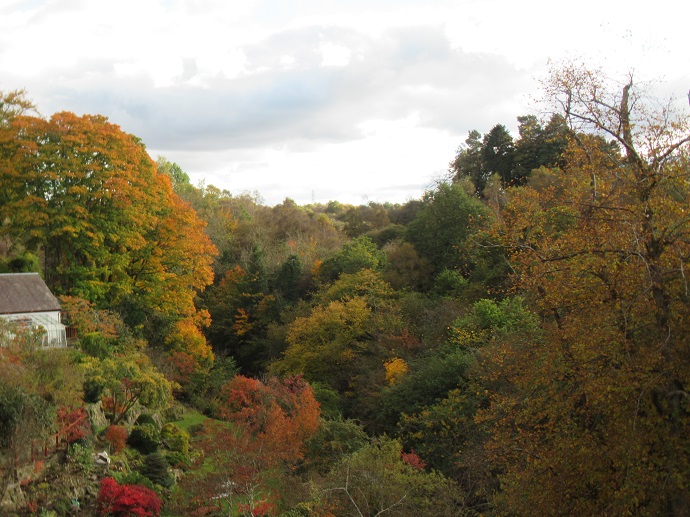 The first part of the way back was just retracing my steps - up the steep bit this time, and back along to cross the first bridge. 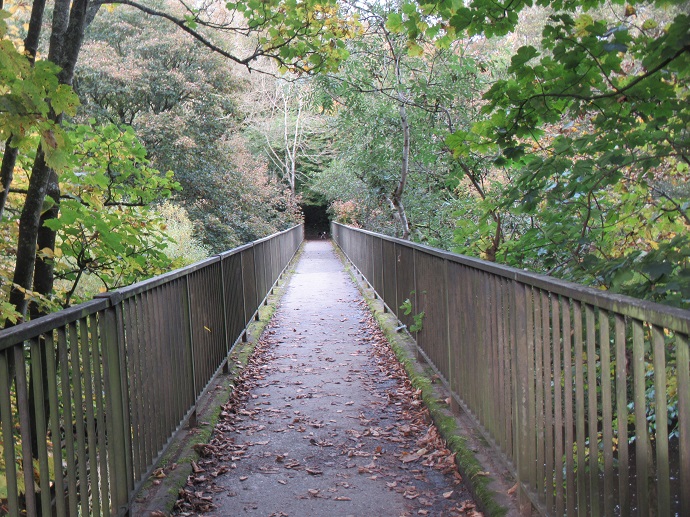 There's a better view of the viaduct in this direction - the other way I think it just appeared round a corner. 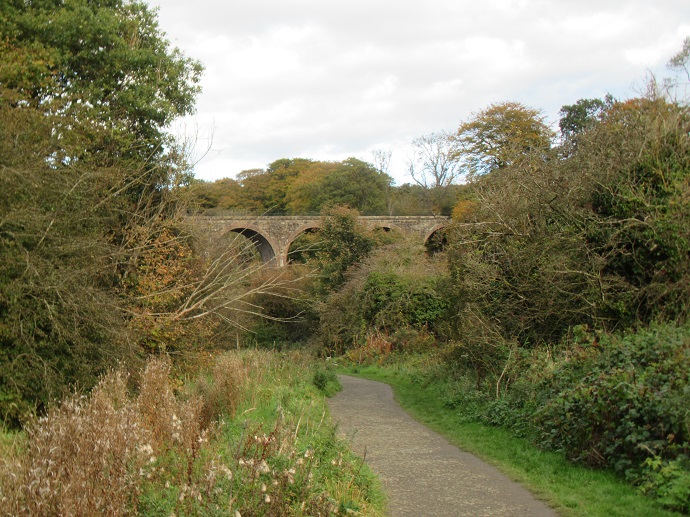 The little channel comes off at the first bridge and is running by the path - I was sure I had read that it was a canal feeder, but it seemed very improbable here that the water could possibly reach the canal, which had been way above the river when I saw it last. 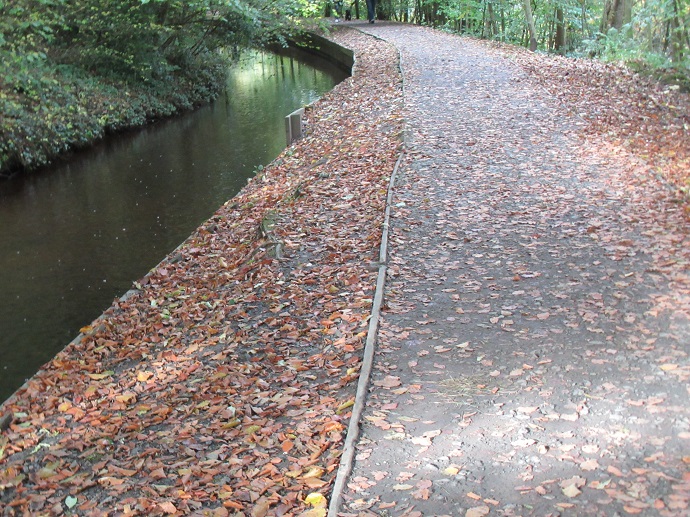 Then back over the river at the second bridge, and back again at the third - there apparently is a path on along the far side of the river beyond the Nasmyth bridge, but it wasn't very obvious at the time, and I kind of wanted to visit the coffee van near the visitor centre, so I just let the main path funnel me back over the bridge and along the first side again.

From the bench outside the centre I started back off along the main track instead of cutting down to the green suspension bridge, but I realised what I'd done, and followed the wall down.

The path was fairly broad at first, and led a bit unexpectedly past some houses, but after that it was nice and lonely - a tiny thread of path perched up beside the little watery thread of the channel, now well above the river, which had obviously sneaked off downhill while I wasn't looking. 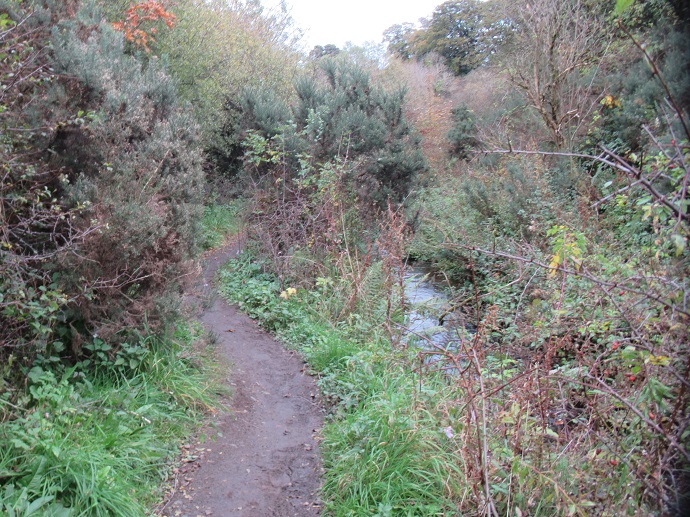 I wasn't really looking as the aqueduct came back into view either - it just suddenly was there ahead of me, along with Illieston Castle standing up on the opposite slope. 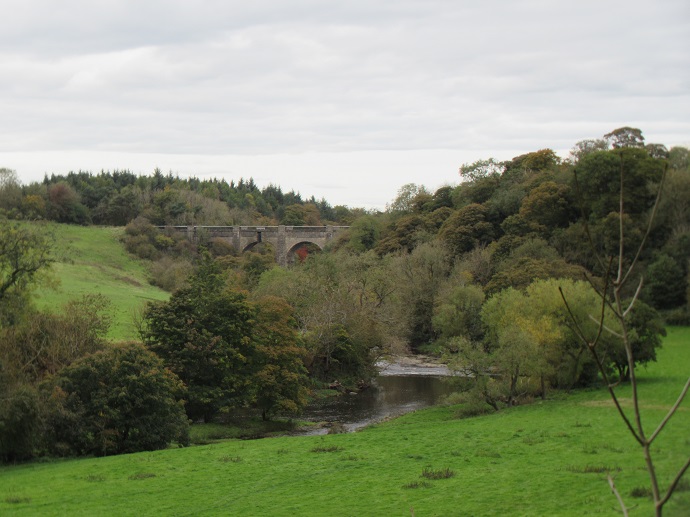 Back to the aqueduct

The path seemed to change its mind about heading straight for it, however, and instead cut up to a road above, which suddenly turned out to be the track down to the Lin's Mill car park, with the sign pointing off for Almondell.

Nothing had happened to the bike on the bridge, and I headed back up and round to the canal and off for home - no particular breaks this time, except a pause to take a picture of a nice sign full of contour lines. 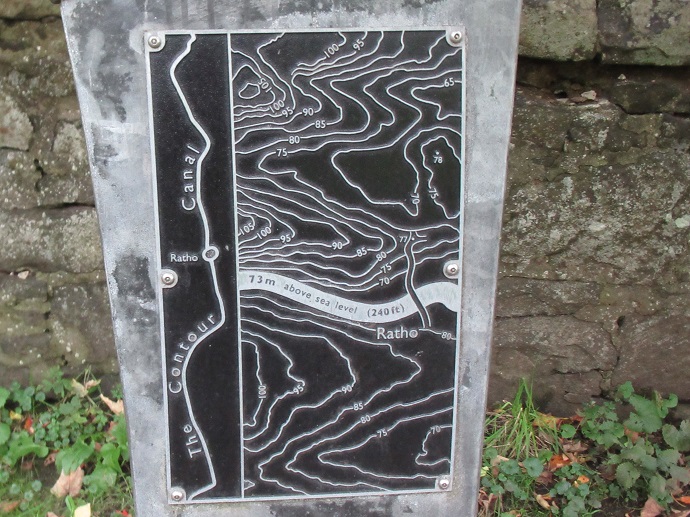