Well, I should have climbed this hill years ago. Paul and I managed to do Beinn Achaladair over 30 years ago in 1988- St Valentine's Day - a Sunday. I do remember the snow and the wind and this latter made us abandon a'Chreachain .
Since then we have done many hills together but Paul has completed his Munros and I am left plodding on alone so on another Sunday , October 18th 2020 off I went.

The creaking is from my left knee- arthritis behind the L patella- but with the aid of strapping, ibuprofen and most important of all two walking poles it is manageable. The right knee is not too brilliant either but between the two of them they have 138 years of hill experience ( not quite- I suspect my father carried me for the first year or two ) so I trust them.

I left my nice warm little cabin at By the Way, Tyndrum just as the sun was coming up- well, I must assume it was coming up as it was getting lighter though no sun to see. I parked at the car park at Achaladair just yards off A82 opposite Loch Tulla.

The trip began badly. I knew the map was poking out of my Paramo pocket but thought it ,for no very good reason, secure enough . After cycling almost a mile to the farm I needed to check the track -no map- back I cycled and found it almost at the car park.

Strange how as you get older you can manage to make the same old mistakes over again but add new ones too.

The track is quite good for a mountain bike though soon after leaving the farm you have to wade across the Allt Coire Achaladair- OK when I did it but would often be above boot level. I've found either Crocs( nice and light) or a spare pair of thick socks( good for gripping ) rocks are then the best answer and walking poles a huge help to keep your balance when the water is trying to push you over. I did not fancy another ford at 330 450 so stayed on the track to the south side of the water of Tulla until reaching a good reliable bridge at 338 453, below the ruin at Barravourich.

The morning was overcast- as it would be all day- but there were other interests beyond the view- stags were roaring in the corrie below Beinn Achaladair- a wild, wild sound which reminded me of my first term at university( that should get you guessing dear reader) ,51 years earlier (and I do not mean the roaring of testosterone fuelled undergraduates). Corrie below Achaladair -full of the sound of roaring stags

I was aiming for the bridge at 353 468 mentioned in the SMC book " The Munros" and marked on the OS map. The first problem was finding it as it is not visible from the track. A tiny cairn and a post marks where you leave the track to walk 50m south to the bridge but you probably will not find a bicycle helpfully indicating the post. Where you leave the track

Then down to the bridge. The SAS believes " Who Dares Wins" . My view was that if I dared then at best I would fall in and be soaked, at worst smash my head on the rocks 12 feet below and end up polluting Loch Tulla days later. Too big a drop if you fall off the bridge

. So with characteristic lack of courage I waded across- once again dry shod but often the water will be much deeper I think Safer through the water

Once across the water of Tulla there is ,as the SMC guide says, a track( though indistinct much of the time) leading east and south around the edge of Crannach wood to pass under the railway line( not as SMC guide says where the Allt Coire an Lochain runs under the line but about 50m to the west of that) where there is an underpass for humans ( well, dwarves anyhow) at 359 467 path by the deer fence

. You walk beside the Allt which is a fine companion .The deer fence continues right up to 640m( is there a deer fence at a greater altitude anywhere in Scotland?)with views north over Rannoch The deer fence ends at 640m

The path continues right up to the lochan though there is no need to go that far- you could if you wanted branch off earlier and go east to the bealach at 375 446 about 600m NE of the summit . But I visited the lochan- a dark and gloomy spot that day.

I then walked due east over boggy ground and up to the bealach for the final 120m ascent . By this time the top had disappeared into the mist 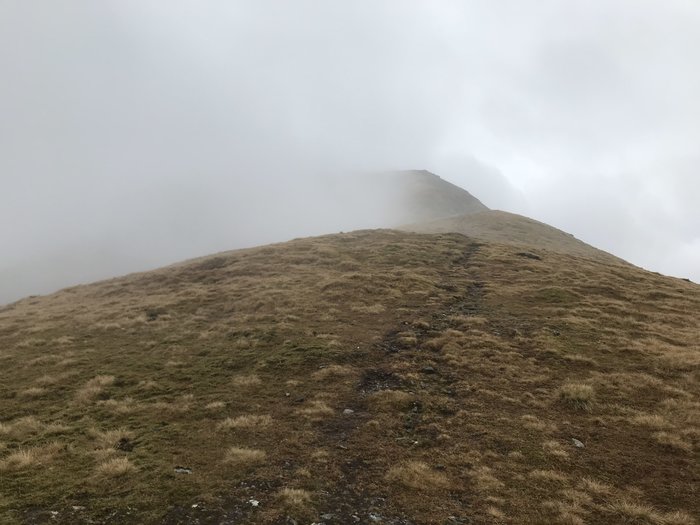 so my summit view was that found on many Munros However, my day was cheered by meeting two chaps with Daisy who was discovering the joys of Munro bagging at the tender age of just two years. I was 19 when I did my first Munro. I met Daisy again at the end of the day -she had very dirty paws by this point- spoiling her golden retriever beauty.. The SMC suggested 3hrs 10m to the summit . It had taken me 4 hours and that was using a bike to the edge of Crannach wood.

But there was no rush . It was only 1pm though a bit cold and damp to stop for lunch so I descended for half an hour and then stopped. I retraced my steps back down the path, under the railway line, another dry-shod crossing of the water of Tulla and then back onto my bike to the car.

Daisy and her companions had gone back over Beinn Achaladair . These two hills are often done together but one advantage of doing them separately is being able to use a bike to get to the eastern edge of the walk.
24 Munros now left to do- will my knees last out?

Nice account of your day on the hill..hope you manage the final 24!