Not the best forecast, but sunny spells and heavy showers wasn't enough to put me off completely... I had been wanting to do the traverse of the Monadhliath munros for quite a while, using the bike to link the start points of the eastern three with Gael Charn to the west. There had been a fair bit of rain around lately, but that's what decent boots and gaiters are for

I arrived at parking area at the end of the single track road above Newtonmore about 8.40am, packed the bag and jumped onto the bike. My 16.5 mile cycle would take me to Garva Bridge to the beginning of the walk up Gael Charn. The cycle was grand, minus having to stop to put my full waterproofs on (which remained on all day from this point on), and I enjoyed the single track road to Garva. After 68 minutes, the bike leg was done and dusted (route below). I locked my bike to the fence and left my helmet, cycling shoes and overshoes behind, and transformed myself into a hillwalker. 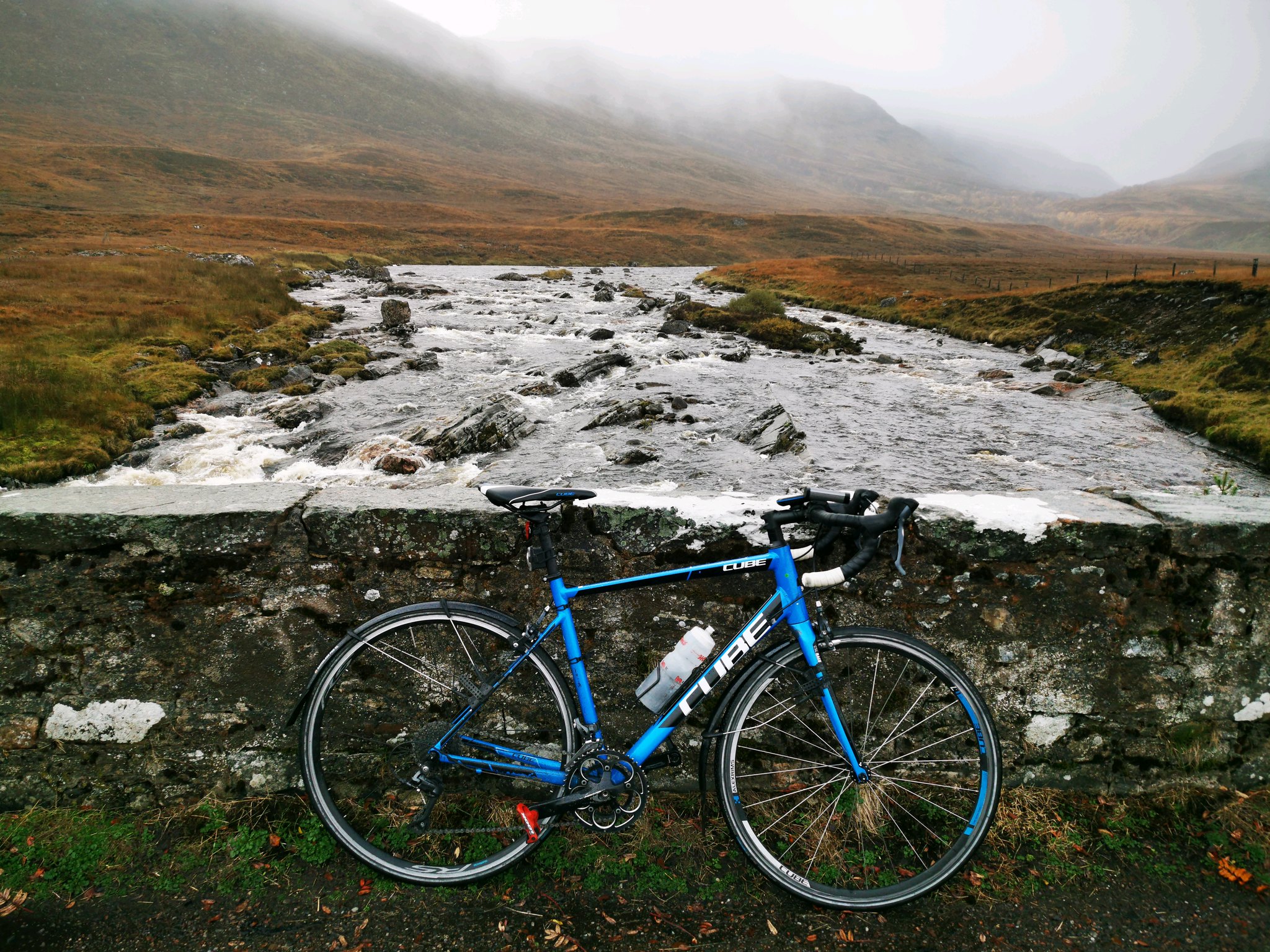 Leaving the bike behind at Garva Bridge

I set off towards Gael Charn at a rate of knots, keen to make progress. I knew I would finish in the dark, so speed was of the essence today. The hill's reputation for being a boggy one was fully lived up to, however I never wasted any time trying to avoid it as I was going to be knee deep in the stuff all day! The rain set in as I was about halfway up Gael Charn, and it hardly relented all day. I reached the large summit cairn of Gael Charn, in cloud and rain, after 1hr 50mins. I stopped long enough to have half a sandwich before continuing on my way, the long slog east to Carn Dearg across bog central. 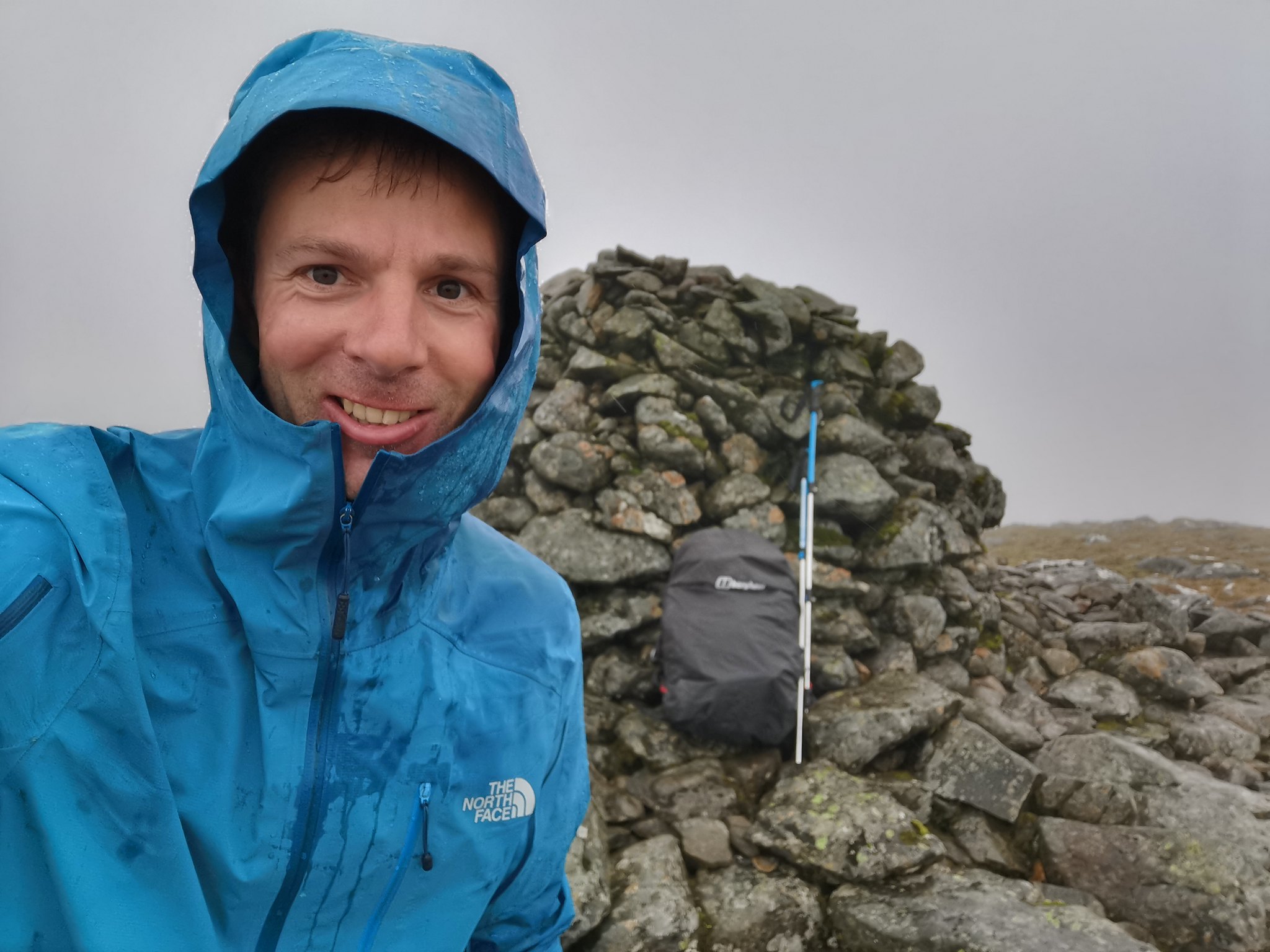 After initially taking care with navigation on leaving the summit, I stupidly became side tracked by a path leading off to the right. NEVER ASSUME!! After stopping to check the map I realised that I had veered off course and had to plot my way back on track. I was really annoyed with myself as time was tight as it was. On the plus side, I came across a cool gorge which I had to negotiate to get myself back on the plateau. This needless detour probably cost me about 2km extra of additional bog and elevation to regain. Sigh. Easy done in such a featureless area in thick cloud, but it taught myself a good lesson for the rest of the day (you can see my mistake below on the map). I would imagine the path would have been a deer path, but it's easy to lazily follow them without checking when your head thinks you're going in the right direction... 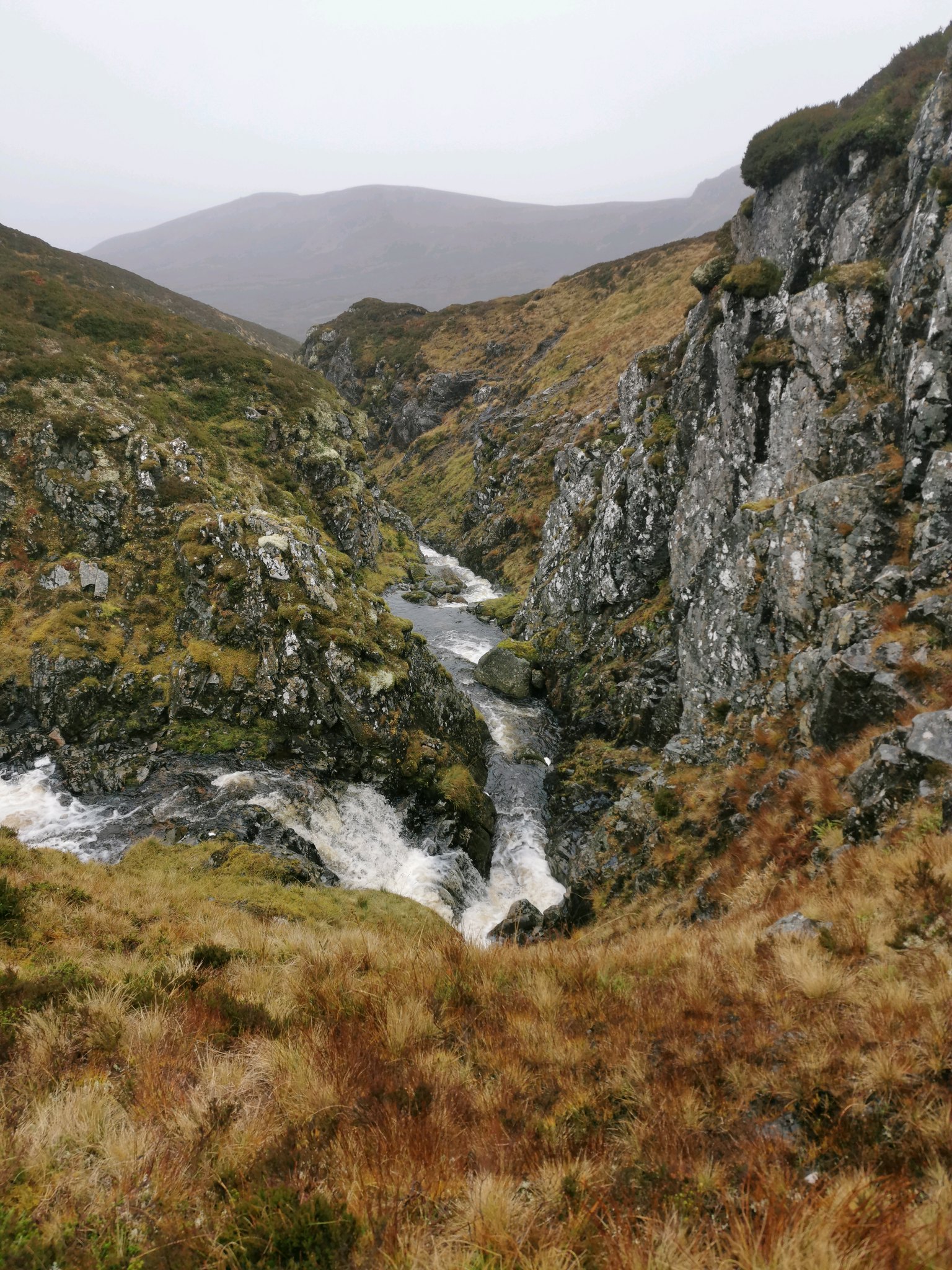 If I'm being honest, the slog along the exceptionally boggy tops towards Carn Dearg was absolutely horrific, not helped by constant sideways rain. It took a solid 3 hours from Gael Charn to Carn Dearg, but it felt like about 6 hours and about 20km! There is no path whatsoever, and my boots were either submerged in bog and jumping deep peat hags the entire way. It has to be some of the toughest hill terrain I have crossed, and very testing for patience. Stopping for a brief sit down was almost out of the question as there was no shelter anywhere and the rain was still battering me from the north-west. I had barely eaten as stopping just didn't feel appealing at all. 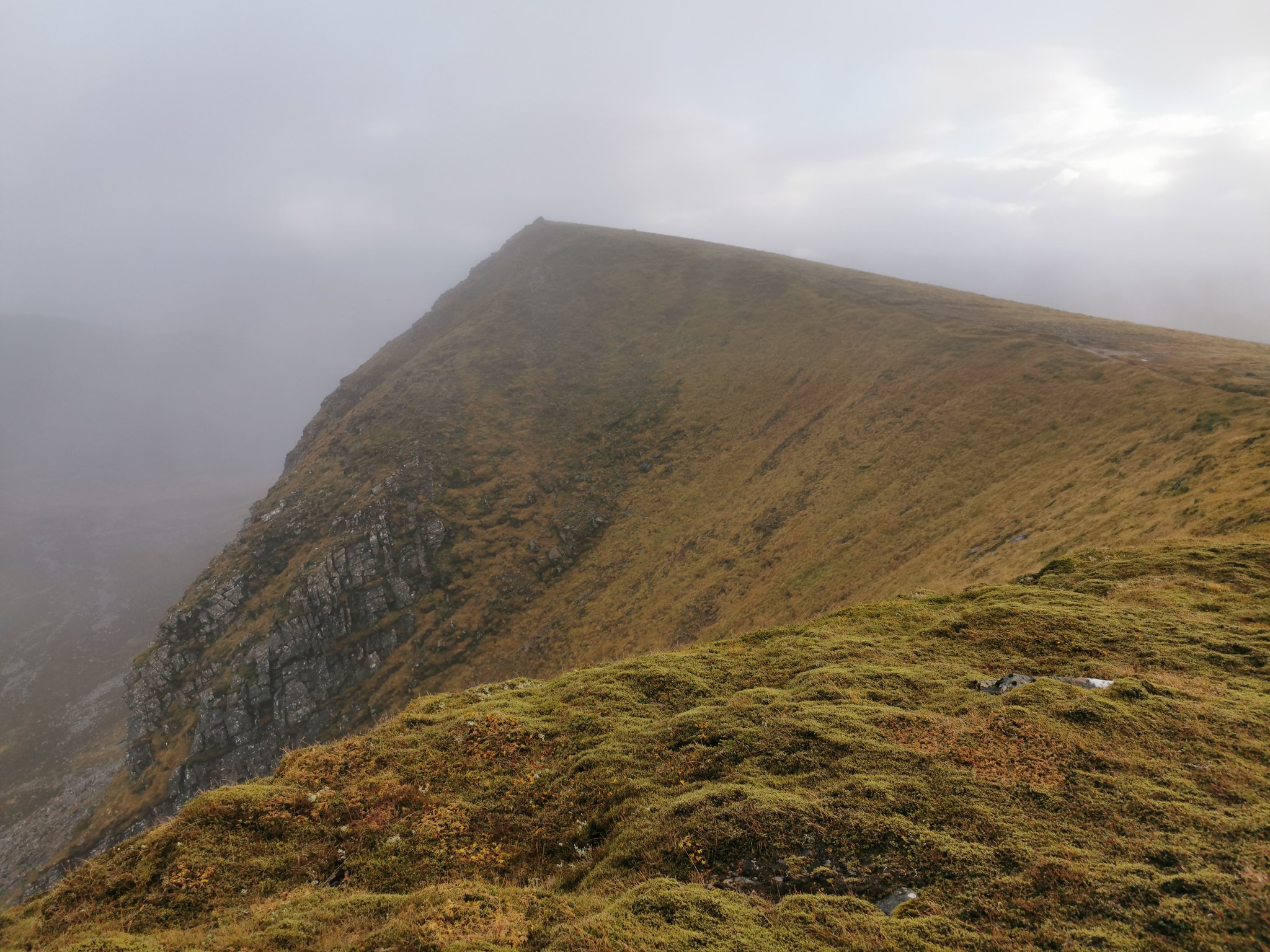 Finally, the Carn Dearg summit, and grateful for a few minutes of clearer weather so I could at least see it

After 4 hrs 50mins, I was standing on top of Carn Dearg, or more likely trying not to be blown off it. The wind was suddenly 20mph stronger up there and no shelter anywhere. My sandwich would have to wait! I clocked a faint brocken spectre in the mist below me as the sun briefly shone through the cloud. This turned out to be the highlight of the day

I also bumped into a couple of Irish chaps that I met when I set off on the bike at the start. We shared bog experiences and I was also amused that one was wearing shorts and the other was carrying an ice axe....

I finally sat down at the bealach below the summit and inhaled some food for a couple of minutes before the next long slog towards Carn Sgulain. Again, this seemed to take forever since I couldn't see anything, but it was nice to have a path for most of it. All four mountains were pretty much underwater however, path or not!

Eventually, I made it to the summit of Carn Sgulain, which was so uninspiring and boring that I couldn't even be bothered taking a photo! The description of "an undistinguished pudding of a munro" seemed quite apt! I barely paused at the top and set off for my final summit, A' Chailleach. It was starting to get pretty gloomy by this point and I expected to reach it in near darkness, which is pretty much what happened. 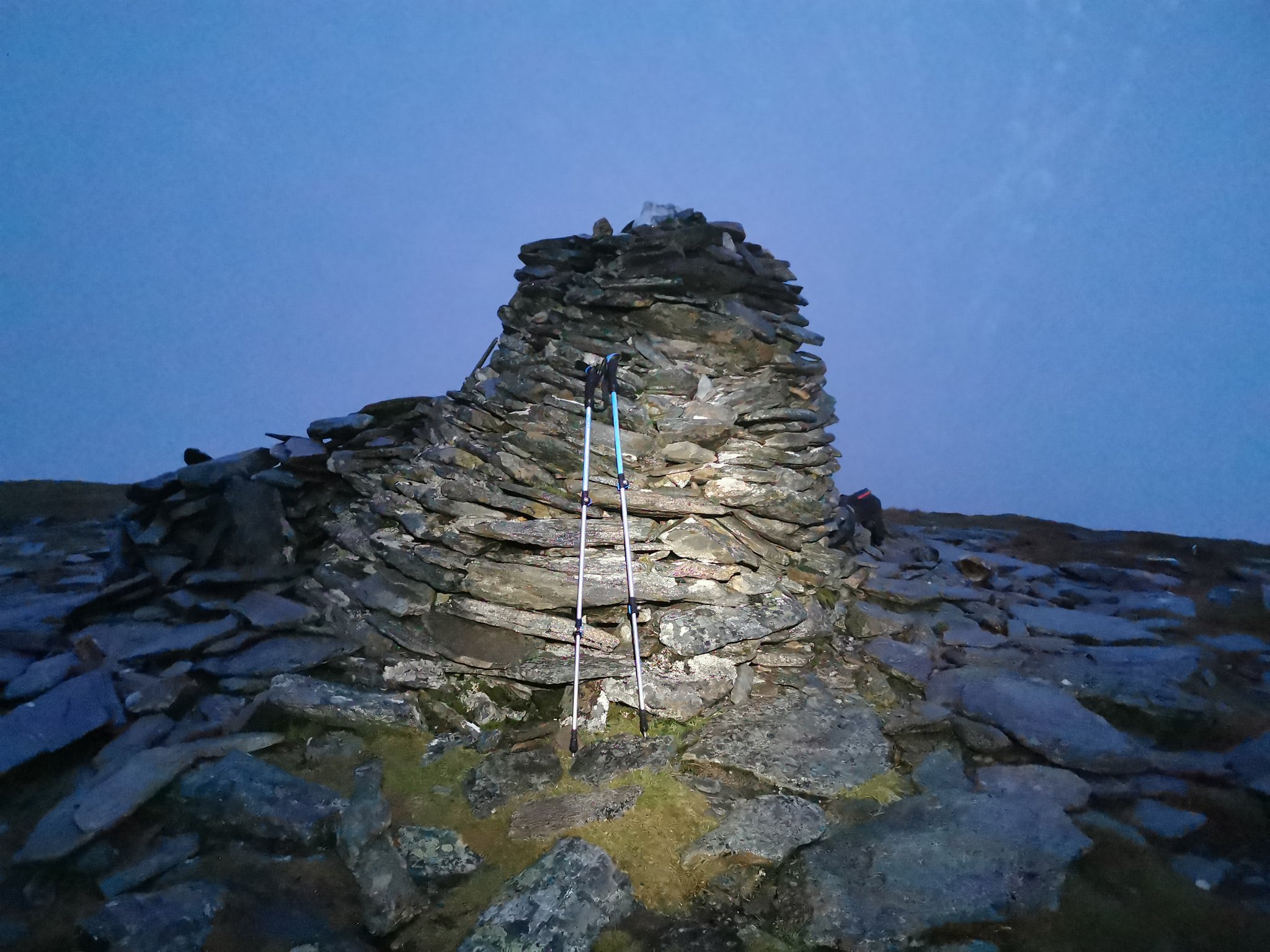 After 7hrs 10mins walking, the summit of A' Chailleach, now with headtorch on

Total darkness followed shortly after, and I took my time in getting down to the footbridge safely. Making sure I was always on the path was easier said than done due to the amount of bog around and the rain blowing across my headtorch. I was glad I brought two headtorches, spare batteries, and also the front light from my bike which is 1200 lumens, if required!

My last minor panic was to reach the river, following the path, and noting that the bridge wasn't there. The noise of the river in full flow at night was deafening, surely the bridge hadn't washed away! Checking the map again, I saw two paths reached the river, a few hundred metres apart. I was on the left hand path and simply had to traverse along to where the other path came out at the bridge. Reaching it was met with a sigh of relief as it was then a wide land rover track back to the car. Finally, 8 hours of rain later.

On reflection, it was probably a bigger day than comfortable in such conditions, but the weather just wasn't on my side. If the 60% chance of cloud free munros and showers forecast had been correct, then it would have made for an enjoyable day. As it was, it was a pure mental and physical challenge, which I guess is also enjoyable...afterwards! It's not a route I would recommend to anybody, unless it has been dry for a month before. The drive to retrieve my bike took surprisingly long at the end as well on the narrow roads, which is also something to keep in mind. In clear summer weather, it might still be a fun traverse to do....someone let me know!

Maybe a shorter trip next time

20201027.gpx Open full screen  NB: Walkhighlands is not responsible for the accuracy of gpx files in users posts

Newtonmore_to_Garva_Bridge_to_start_the_Monadhliath_traverse.gpx Open full screen  NB: Walkhighlands is not responsible for the accuracy of gpx files in users posts