An Ruadh-mheallan: in the land of cloud and deer

An Ruadh-mheallan: in the land of cloud and deer


In the last days of September, Kevin somehow managed to injure his back. I deduced it must have happened when we were painting the bathroom, stretching to reach every corner of the room. He is no contortionist after all... At some point the pain was so bad he couldn't sleep so he took time off work and was prescribed strong painkillers. For a few days, it was like having a man-flu patient at home (or a zombie Kevin), but thankfully, the injury healed rather quickly. As soon as he was off the pills and ready to go back to work, he was also eager to return to the hills. I didn't want to curb his enthusiasm too much, but I was worried he'd simply make his back worse again, so I suggested him an easy half-day Graham, An Ruadh-mheallan. We had done it before, but since I invented "the second round of Torridons", it was a good excuse to revisit.

Because Kevin was not up to any scrambling or long-distance walking on tough ground, we had only one route available, the shortest approach from the top of Bealach na Gaoithe:

Track_AN RUADH MHEALLAN 7,2KM.gpx Open full screen  NB: Walkhighlands is not responsible for the accuracy of gpx files in users posts
Weather was far from friendly today, with frequent showers passing over western Scotland and low cloud over the summits. We didn't see much from the small parking area on Bealach na Gaoithe, apart from Loch Diabaigas Airde:

There is a path to start with, but very soon it peters out in the bumpy ground full of lochs, lochans and rocky outcrops. Perfect terrain to practice navigating in misty weather

We had our old GPS route so could simply follow our own footsteps. The area just above the pass is rather wet: 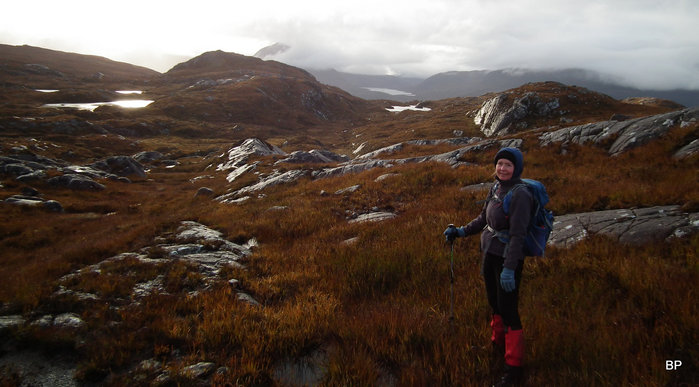 We walked through the first of many showers, but on a positive note, Kevin captured a rainbow: Our target Graham was still covered in cloud and we didn't really expect it to clear. It was more a walk to assess Kevin's back and burn off some extra calories...

As we came closer to the steeper section, we heard a stag roar... Soon, several deer voices answered from different directions. We noticed one young, single male on the hillside above us...

...and another one, on the flatter, grassy ground to the right of us... ...but only later, when we gained height, we spotted the monarch of the glen (and a few females) grazing close to the summit of An Ruadh-mheallan. Sadly as soon as they sniffed us, they took off and we didn't manage any decent close-ups.
Monarch in the mist:

Back to our personal experience with the Graham... as the ground steepened, it became waterlogged and very slippery so care is needed here, especially in rainy conditions we had: There was a glimmer of hope for the views when between the showers the cloud lifted slightly to reveal the northern end of Skye:

...but soon we realized that it wasn't meant to be today. Looking down with clag "glued" to the tops of Beinn Damph and Beinn Shieldag:

View back to the lumpy-bumpy area around the Windy Pass:

The climb proper is only 300m so it didn't take us long to reach the rocky summit of An Ruadh-mheallan:

The summit area is surprisingly flat and on a good day, it would be a great viewpoint, sadly today the views were limited... Beinn Alligin (or what we could see of it):

Lucy on the summit:

As it stopped raining, we spent some time sitting by the cairn hoping maybe the clag might lift a bit more, but we lost the patience eventually and headed down the wet slopes, carefully placing our feet on steeper sections. Lower down, we took a slightly different line, thinking maybe it would be less squelchy, but this whole area is like a sponge, no dry line one could follow... I stopped to admire a strangely positioned rock. How does it not tumble down? Looking back to the bulky shape of An Ruadh-mheallan: Back to Loch nan Tri-Eileanan:

Kevin on a rocky hillock above Loch nan Tri-Eileanan. He enjoyed the outing despite wet conditions and was very optimistic about his recovery: Looking west from the viewpoint above Bealach na Gaoithe:

It was a relief to see Kevin able to move without pain (and moaning) but this was as much as I could allow him to do today. We drove home in good mood despite the grey, depressing conditions outside. Hopefully, we thought, the following weekend brings more decent weather!

The following weekend was not as good as we had hoped, but it was good enough for a long-awaited return trip to Bennachie, where we investigated two plane crash sites, not without silly mishaps! TR in progress

For more views from An Ruadh-mheallan, here is my old report with better pictures:
https://www.walkhighlands.co.uk/Forum/viewtopic.php?f=9&t=79405

At least you got a tiny bit of clear sky on the summit!

Looks like yet another nice hill I'd never heard of!

Glad to hear that Kevin's on the mend

Alteknacker wrote:At least you got a tiny bit of clear sky on the summit!

Looks like yet another nice hill I'd never heard of!

Glad to hear that Kevin's on the mend

Fortunately, the injury was short lived if very painful! Such a shame weather is not cooperating this autumn. We have a week of hols next week (we were supposed to go to Poland, but not in the current climate, they are on the verge of collapsing with 20 thousand cases a day now). I don't know what we will do if the rain continues...

Nice report! It's a good wee hill for a short day and/or when the big ones are clagged in. There are some nice waterfalls at about
NG839604 which are worth taking in.

BlackPanther wrote:I don't know what we will do if the rain continues...

Hang in there! - long range forecast currently looking much better for the second half of next week.

jmarkb wrote:Nice report! It's a good wee hill for a short day and/or when the big ones are clagged in. There are some nice waterfalls at about
NG839604 which are worth taking in.

Kevin said he wants to return to this hill in early spring when snow is still on higher ground. Would be interesting to see the falls then, usually rivers are full this time of the year. Hopefully we are not heading for another spring lockdown!

The forecast from next Wednesday on looks cautiously optimistic... Fingers crossed...