I hope this is not too messy. It is my first attempt at recording a walk Ben More at surise with it's halo

Our route was the "easy" route from Dhiseig on the shores of Loch Nakeal.
An early start and a beautiful day when we set off from our b&b in Fionnphort. After a wet week we had been rewarded the previous day with a lovely day on Iona and had been looking forward and hoping to have a clear dry day for our climb of Ben More.We were not to be disappointed
Our waypoints had been uploaded into the gps the night before and we were away.
After a 1 hours drive, we parked up on the shores of Loch Nakeal and set off up the track opposite. 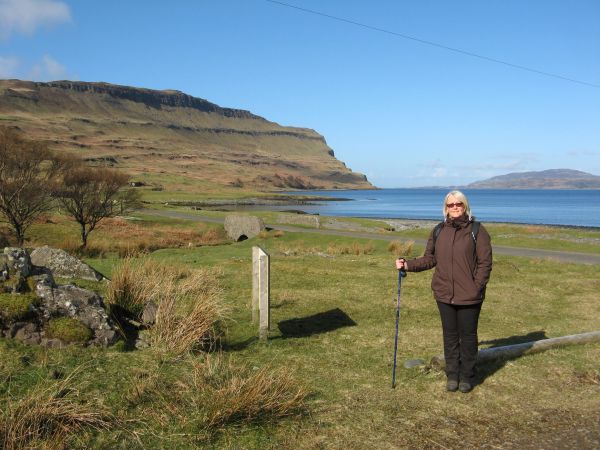 Shona at the start of our walk up Ben More

Ben More is commonly known as the last Monroe but in our case it was to be our first!
My wife Shona had just recovered from breaking her ankle in 2 places 12 months ago and had to abort a climb of Snowdon a few weeks previously.This was going to be a tough day.
The first stretch was a pleasant stroll up a gently sloping hill. The gradient gradually increasing, we had to cross the stream to continue our ascent to the ridge. 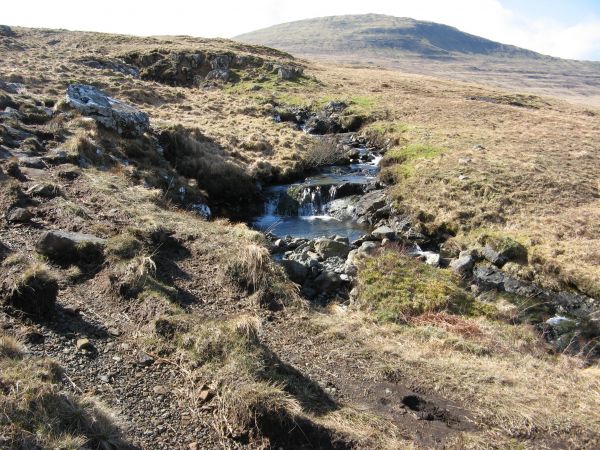 The stream just cos it looks nice The summit which was previously obscured by cloud could now be seen clearly and we could make out tiny figures walking up the ridge to the summit. 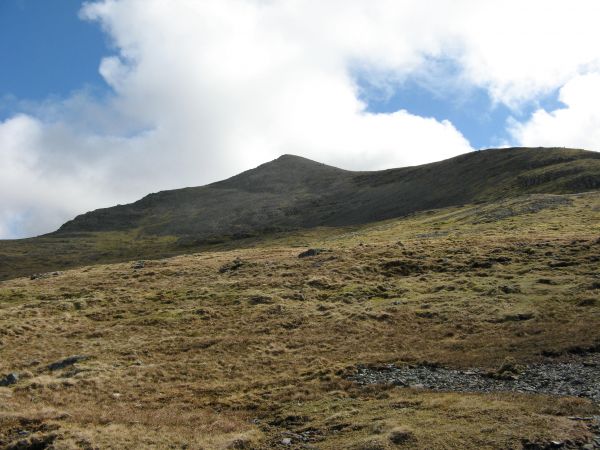 The summit having emerged from the cloud

At around 1,500ft the gradient started to get a bit steeper and we stopped to have a bite to eat and some refreshment. The view back towards the car was now quite stunning. Looking around to the east, most of the Islands were coming into view and we looked forward to getting onto the ridge which would then reveal Iona which was still hidden behind the hills to the South West.
We reached the ridge and were not disappointed. To the North we could clearly make out the Cuillin hills on Skye approx 56 miles away and Ben Nevis 46 miles to the North East.The temperature had dropped considerably now so the coats, gloves and hats had to go on as we started to climb the scree slopes of the ridge 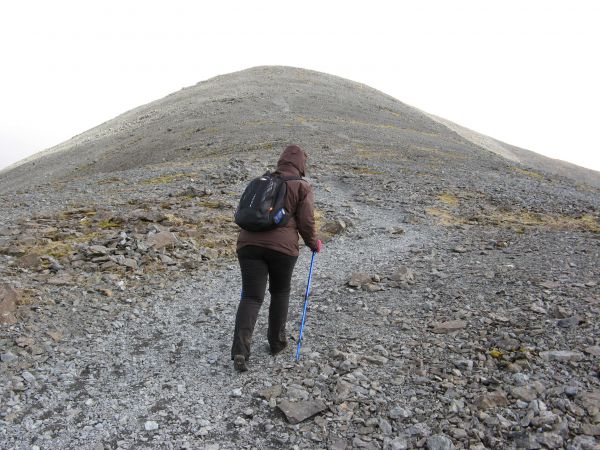 Shona on the final climb up the ridge to the summit 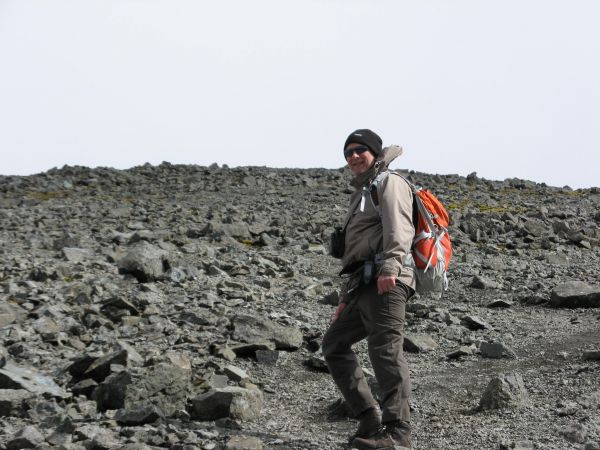 View from the ridge to the North East 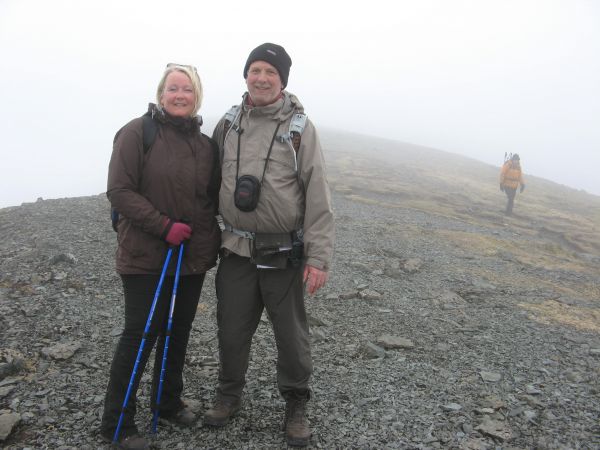 Just about made it

On our route to the summit we had been passed by a number of other walkers who were now on their way back down. We stopped to chat with several and were told that the summit was constantly in and out of the clouds. As we neared our goal we were engulfed in cloud and it stayed that way until we had started our descent.
We were completely alone for approx 15 minutes sitting within the circular wall of the summit. 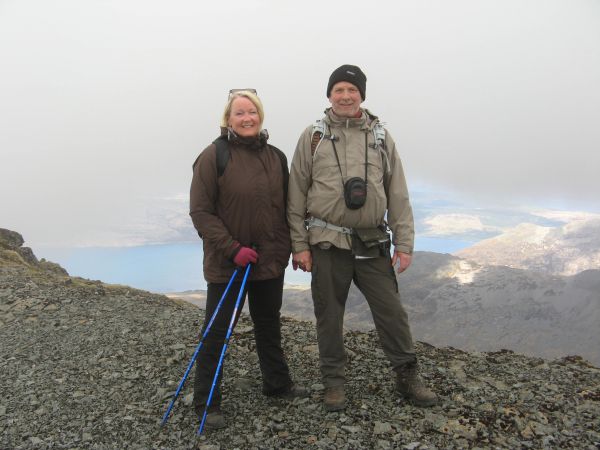 On the ridge just below the summit

Back below the ridge the cloud was now above us and we met a couple of students from Dundee university on their way up. We watched their progress as they reached the top and started their descent. This was an event in itself to watch them bounding up and then down the hill, arms like windmills as they overtook us. Further down we then passed them for a while before being overtaken again!
Once back at the car we met up with them again and apparently they had left their rucksacks with their tent, clothes and provisions halfway up the mountain to lighten their load on the climb and could not find them on the way back down!Lucky boys found them after 20 minutes of frantic searching the hills!
Feeling sorry for them we gave them a lift back to Fiennphort as they had missed the last bus whilst looking for their kit!
An hour later we were back in the pub at Fionnphort enjoying a well earned pint or two.
A memorable day which we will never forget. And well done Shona!!!!! ben more.gpx Open full screen  NB: Walkhighlands is not responsible for the accuracy of gpx files in users posts

A great photograph to start your first walk report, I hope it will encourage others not to leave Ben More as their last Munro to summit. It is too good not to discover before you compleat. Unfortunately, I have seen it many times in the lovely glowing light you captured in your photograph but my experience when climbing it was in stark contrast to yours.
Setting off from the lochside on a cold March day, the weather was overcast and seemingly benign. The mountain weather forecast predicted stormy weather approaching but that was not until early next morning. We were set for a good winter's day.

How wrong we were. With crampons on and ice axe out, all had gone so well, we had carefully traversed A'Chioch and were heading towards the summit. This was when the weather closed in as the wind strengthened bringing with it a ball-bearing blizzard, slowing progress and meaning I had to use my winter equipment in anger for the first time. Fortunately we were with our hillwalking club and older, wiser heads that gave us the encouragement and support to get us through. We were beyond the stage where it would be easier to return from where we come and it was safer to continue the short summit where we could quickly descends the slopes to Dhiseag.

That final climb up an icy snow gully to the summit seemed to take for ever, every energy sapping step a mental challenge as well. On safer ground now, the weather still conspired aganinst us the wind whipping in from the Atlantic meant that on the descent we had to frequently stop, crouching or lying down so as not be blown from our feet. A long, wet, slippery descent deposited us on to the loch road and a cars. This had turned in to an epic trip in the mountains. The continuous self-analysis that is inevitable after such an outing confirmed one thing - I was hooked!

That's a cracking first report John. We climbed Ben More on our honeymoon - over a nearby Graham and, like Papagenos, the A'Chioch ridge which has some scrambling and alot of scree, I seem to remember - pretty scary if snow-covered, I'd have thought. It was the only fine day of the week, the rest of the time it poured with rain - but that doesn't really matter on a honeymoon

The reason your map didn't work at first was because we'd only set it to work with tracklogs, not route files. I've now changed our code so it can show either.

i climbed ben more when i was on mull for a holiday and stayed in the cottage at Dhiseig, you would have passed it on the way up, the stream in your photo is actually the water supply for the cottage, , i can still remember sitting at the top of the hill on a cloudless warm sunday morning staring at the views for about 40 minutes untill i heard voices and decided to make my way down,a couple of minutes after leaving the top i could see a constant stream of people making their way up , most of them were young women, so i decided to show off a wee bit and jog down the hill side, the only problem with this was that there was never a break in the line of people that would allow me to stop and have a rest without looking like a silly old goat so i kept jogging all the way back to the cottage

, for three days my legs felt like someone was stabbing them with red hot pokers every time i tried to move. lesson learned, walk down hill in future and no more trying to show off

A fine report, much enjoyed and very enlightening.

The ridge to A'Chioch looks interesting, I haven't come across mention of this in anything I've read.

was half planning on leaving this as my last one ... (one far off day in the future)... but not so sure now
heading to mull in october... may be tempted to do it then.... though then which one to leave as last?
hmmm...

Nice report and nice photo of the ridge over to A'Chioch, must try that out.

Nicely done, and almost a first in having recognisable people!

Congrats to Shona too - I've been assured that broken ankles are a bugger and my mother claims hers never loosened up properly... so to be galavanting up a Munro after only a year is good going!