Leaving Glasgow early, it was raining but it didn’t last long.

Both the MWIS and BBC forecasts were looking promising and they turned out to be more or less correct. No problems getting through the twelve miles of 40mph roadworks but did get held up a little at the traffic lights controlled contra flow close to Pitlochry – little traffic so not too serious.

Parked just beside Loch Moraig – first car there but there were quite a few when I returned in the afternoon. Followed the standard WH route for the three munros.

Set off up the track and turned off at the wee hut.....which is now just a heap of corrugated iron. Other earlier reports show it in all its glory then half blown over...and now it’s gone. There then followed a relatively boggy section until the start of the rubbly path which leads up Carn Liath. It looks just like a scar from the distance but makes the going easy although the stones are loose in places. The views back to the south start to open up on getting higher up the hill and it wasn’t long before I reached the top of Carn Liath. From the summit there’s a good view of the twisting, turning ridge towards Braigh Coire Chruinn-bhalgain (BCCb) and then on to Carn nan Gabhar (Gabhar). 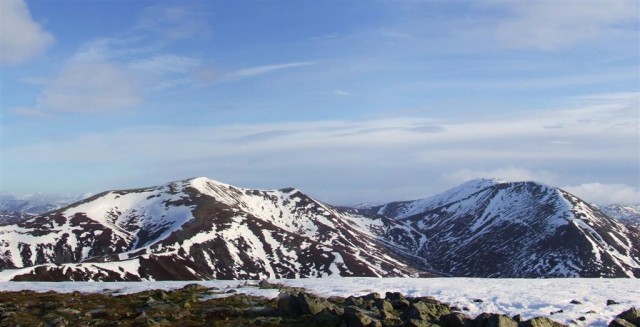 Heading NW down from Carn Liath I stopped to put on a jacket and microspikes due to ice/snow; the wind was also making it a lot colder. Just at this point, another walker appeared from nowhere and went straight past me going at a fair old rate; I didn’t meet him again until I was just below the third summit and he had started his return !

The track to BCCb is like a slow roller coaster as it twists and turns up and down on the way to the second summit of the day. 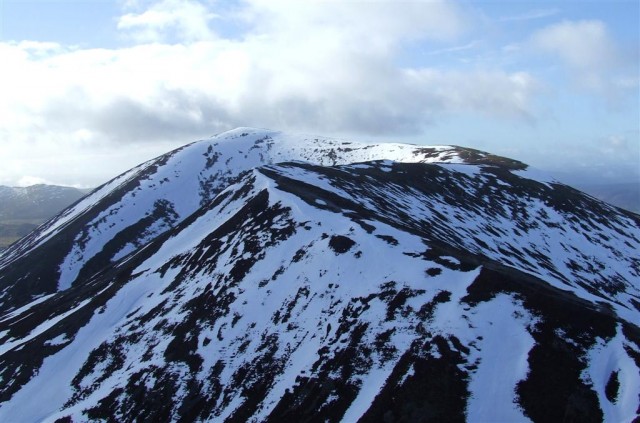 From the top of BCCb, I had to go W then N towards the 1004m top then turn sharply E to head down the slope towards Gabhar in order to avoid the steep sides below the summit. At this point, some grey clouds rolled over and there was a flurry of snow which soon ended. The clouds blew over and the sun came out again.

Once down on the bealach there are great views N up Glas Leathad. It’s then a straightforward walk up to the summit where again you come to the trig point before walking further along to the summit cairn. Again, nice views all round. It was cold and windy on the top so I got some shelter below the first cairn for an early lunch. Then the return journey – retraced my steps back down to the top of Bealach an Fhiodha and met two more walkers heading up Gabhar. I then followed the Allt going down SSW towards the base of Beinn Bheag then SW back towards the main track. The return journey seemed to take almost as long as the outward journey probably due to the mix of snow, bog and peat hags coming down the Allt Bealach an Fhiodha and round Beinn Bheag.

I hadn’t been out for a walk for over a month and was happy with my time; by cutting out all the stops for photos, views, refreshments, catching breath, put on microspikes, take off microspikes etc, I’m sure I could cut the time down (and completely knacker myself no doubt) but then what’s the point of going in the first place ? If I just wanted exercise and fresh air, I could walk round the house for a few hours.

Despite the long walk out at the end, this was a very enjoyable day out made all the better by the nice weather.

Savour it and enjoy it - as if you need me to give you that advice....

It's nearly 2 years since I did this walk and I've still not go the report up yet! That day, in June 2009) the hut was still standing. When I next passed by en-route to the Corbett Ben Vuirich in June 2010, it was collapsed in it's side, but most of the pieces were still there. Looks like it's been well and truly cannibalised now.

Hi Rockhopper that would have been me passing you I don't have much time before I need to hit the road to return home due to the wife's shift work so need to get home to the kids. Wish I could have spent more time up there the weather was great. Got you on one of my pics heading up Carn Liath, a good day apart from the stalkers path on the outward route

Cheers Graeme.
Checked the time on my phone (phoned the wife just after getting to the top of Gabhar) so knew it took about 4hrs to get to the final top.......allowing for half an hour on the top, it must've taken me about 3 hours to get back to the car. With fewer stops on the way down, I reckon it must've taken nearly as long to return as to get up....think I need a new left knee.

Compared to csimbad though, I was positively pedestrian

Hi csimbad.
You were certainly shifting yesterday. I saw your pic with me - bent double under the weight of my sack, struggling against the elements...

Agreed on the stalkers path but heading into the sun was great.

some nice pics on there

Looks like a fine walk, so good infact i might pop up there soon for a jaunt

What do you think are the chances of finding a suitable camping spot near Bein Bheag heading towards Allt Bealach an Fhiodha if walking the route in reverse?
Got my tent to test out and could nip up after work on friday walk alittle ways in camp then head up and round in the morning

you will be in here somewhere

had intended to do this ...

That was a fair old leg stretch in a very respectable time, I would have needed a stretcher and oxygen to get back......looks to be a nice walk and I like the cut of BCCb ridge...some nice photo's.

What a weekend of weather that was

Thats a fair pace for doing this in winter.

I did these in October before the Snow came and it took me 5.30hrs - but i ran the last 10k

Thanks for all your comments

MW and Paul - yep, it's great to get good weather, makes it all the more enjoyable

doogz - nice photo - it was certainly a busy area that day

Bruadair and dooterbang - I was happy with the pace but nowhere near the fastest as you'll see from csimbad's report of the same day ! I tried jogging the last few yards to the gate before the car park just to see if I could do it.............very quick conclusion, I should stick to walking as I'll never be a runner

Ross - that section was covered in a lot of longish heather and boggy sections - I don't remember seeing many flattish grassy areas but have to admit that I was concentrating on trying to find bits of a track. I've attached below 3 other photos to let you see the sort of terrain - the first is looking back to Airgiod Bheinn from the bottom of Coire Fhiodha, the second is looking forward from there and the third looks up towards the ridge between Liath and BCCb. Not sure but it might be flatter further down towards the main track ? 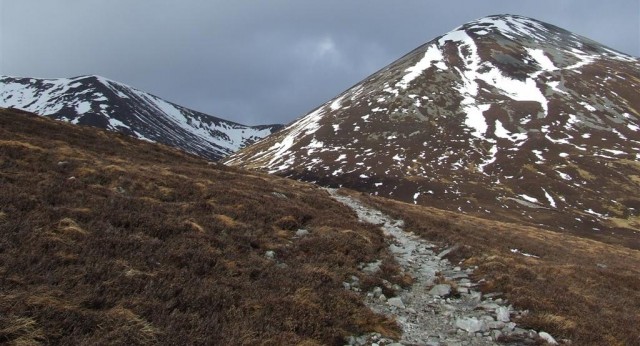 Cheers for the pics Rockhopper, gives a good idea what to expect. Might leave this one for another time as i'd be arriving with onyl a few hours before dark and dont wanna have to search for a decent flattish are for too long lol.
Although the ground does like fairly flat in the 3rd pic.