My 3rd attempt to climb Cruach Adrain after 2 failed attempts due to lack of daylight and bad weather. The first being virtually 4ft of snow to wade through which was impossible but not for the want of trying

After a 4 hr drive I didn’t want to be beaten! I made it to the forestry road on route from the cottage as described in the route description then decided to give up as I was getting nowhere fast!
My second attempt was during an ascent of Beinn Tulachean. After reaching the summit the light began to fade fast so I decided to abort to be on the safe side. I’m not a fan of night hiking!

This time I arrived with plenty of light time (or so I thought) and the weather was fab. 10 degrees when I set off so I began in my base layer. Making good progress on the clear path up to the ridge I stopped for lunch at around 750 metres just before reaching the fence style. Great views towards Oban but I didn’t hang around as there was an ominous looking cloud base lying in the north of the valley. The temperature started to drop as I pressed on then I hit the snow line around 820m. On went the crampons, for the first time since last winter, which I was thankful for along with the ice axe as the snow was very loose due to vast snow melt in the previous few days.

Quite a few slips and minor falls later I had to don the goggles and balaclava as a slight change in direction up the ridge meant facing into an extremely cold wind. After 20 mins of exposure the wind-chill was almost too much to bear and I was glad to reach the summit soon after. I checked the temperature and could not get a reading which meant the cold had affected my gauge or it was colder than it could measure which is -20. I suspect the latter as it was one of the coldest summits I’ve ever experienced.

I high fived the trig and quickly started to decent as although the clear and beautiful views were enticing, the cold and very strong wind were not. Loose snow made the decent slow and before long I was losing light fast. This was a worry as I had 700m left to decend. I managed to reach safety and remove the crampons just as the dark set in. With the spikes off I hot tailed it out of there on the same route back to the cottage. I was glad to reach the car just outside Crianlarich's border after being a little freaked out by the dark. Why is it when the light fades in the middle of nowhere and there is a creepy wood staring at you you automatically start thinking of horror film scenes! Maybe it’s just me! 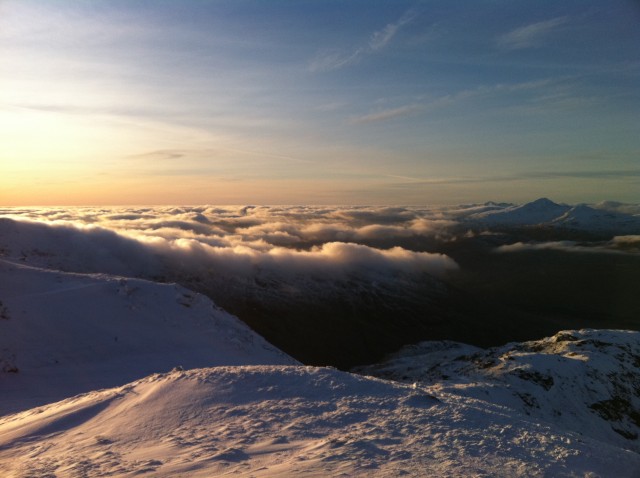 Very nice DJG. You've also got some cracking pictures there - great to see what I didn't really manage to see when I was up there in somewhat poorer weather last year

10/10 for persistence, great report but sounded a wee bit too chilly for my liking and as for the dark woods....lets not even go there

Thanks for your comments guys. Better luck with the views next time!! Glad you like the photos.