The dark side of Rinnes

The dark side of Rinnes


We had climbed Ben Rinnes several times, in different conditions, from lovely September sunshine to a cold and windy winter day, so another visit to this Corbett seemed unnecessary... But we had one extra thing to check on this hill. Yes, you guessed, another plane crash site. This one is not very popular and I bet most of you walk to the top of Rinnes and pose by the trig point, not even realizing that only a few hundred metres from you, the remnants of a tragic accident lay on the steep, northern slopes of the mountain. Even easy, benign hills like Ben Rinnes have a dark side.

We had originally planned to visit this crash site last year when we had climbed Rinnes on Christmas Day, but by the time we reached the summit we both felt very weak and we simply didn't have the strength for wreckage hunting. It turned out that we had both been infected with a nasty flu-like virus and as a result, we celebrated New Year in bed, coughing and sneezing. Now, looking back at it we wonder: was it COVID? Probably not, as we caught it about three months before the first official COVID case in Scotland.

Regardless of the nature of the nasty virus, it prevented us from visiting the crash site, so less than a year later, we decided to return to Ben Rinnes and finally find the lost Wellington. There is very little information about this particular crash site online (links at the bottom of this TR as always), but we knew roughly where to look for the wreckage:

Track_RINNES PLANE CRASH 8,4KM.gpx Open full screen  NB: Walkhighlands is not responsible for the accuracy of gpx files in users posts
We began walking from the usual spot at the start of the eastern path, where cars can be parked. The day was rather cloudy and with a brisk wind, but we hoped it wouldn't be too breezy for wreckage hunting. But first, we intended to climb the path to the summit.
Views from the start of the walk: 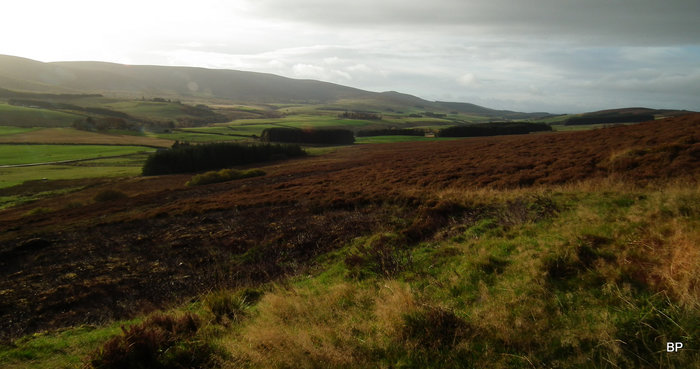 Mist lingered around the summit but for us, today was more about what was on the ground rather than on the distant horizon... 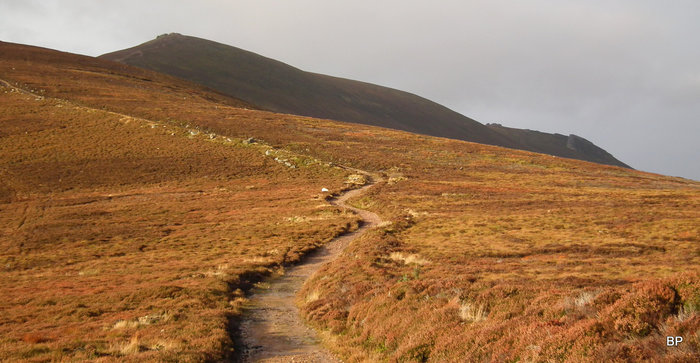 With every visit to Rinnes I feel that the path is getting more and more eroded. This Corbet is hugely popular and even today, on a breezy Monday, we still saw several groups of people walking up.
Close to the top: 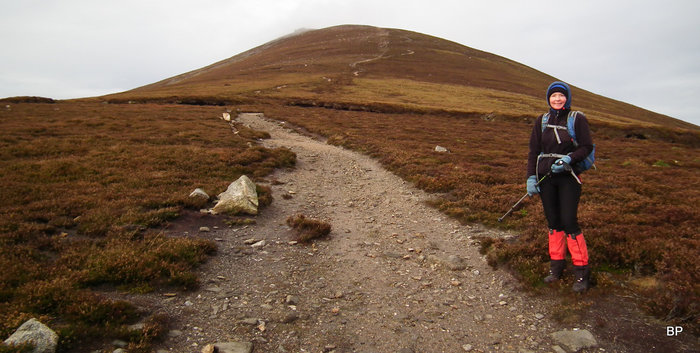 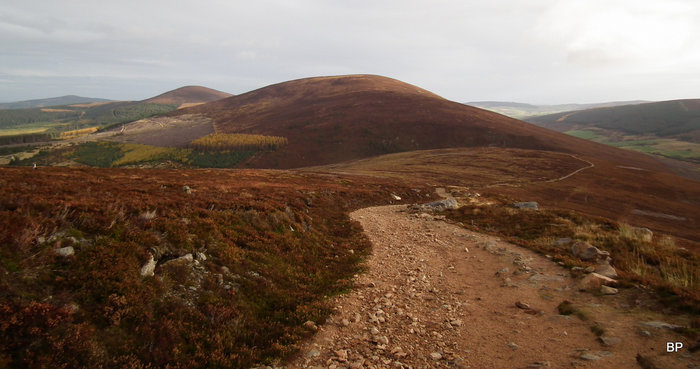 It didn't take us long to reach the top, marked by a large tor... 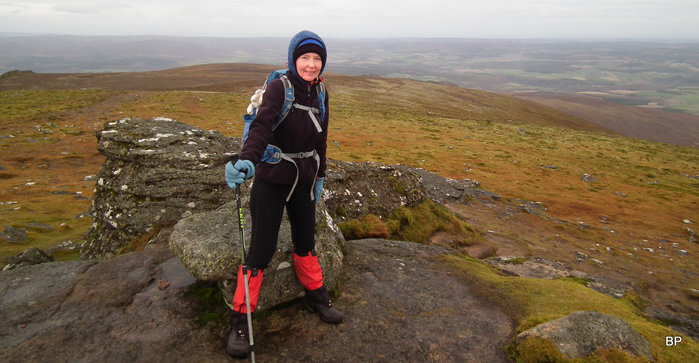 To fully appreciate the beauty of this mountain, I'd recommend visiting the western tors (Scurran of Morinsh and Scurran of Well), but today, we had a different agenda, so after admiring the misty views for a few minutes...

...we set off in NE direction across the mossy ground.
It is there somewhere...

The first set of remains we found on the height of about 780m, it wasn't a lot but proved we were on the right track: 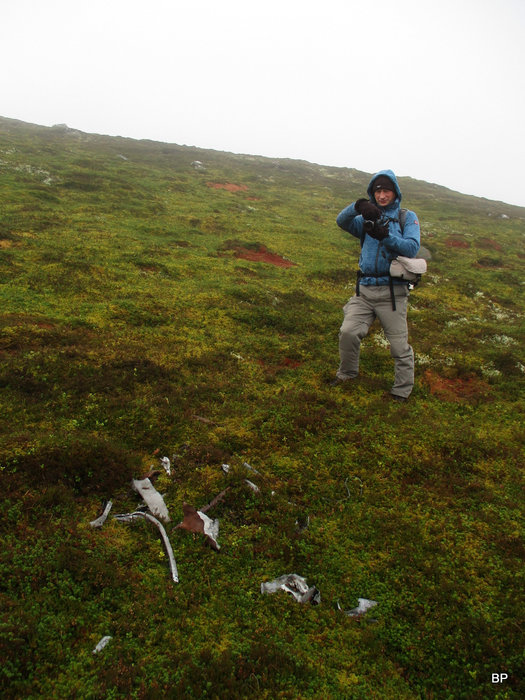 Most of what we found today were parts of the airframe and small pieces of aluminum from the fuselage (I'm no expert on plane parts) and we guessed that if the plane hit the slope at its full speed, it must have been smashed beyond recognition. 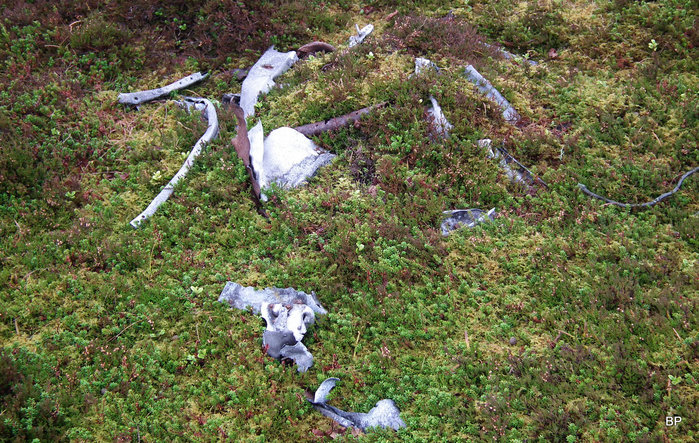 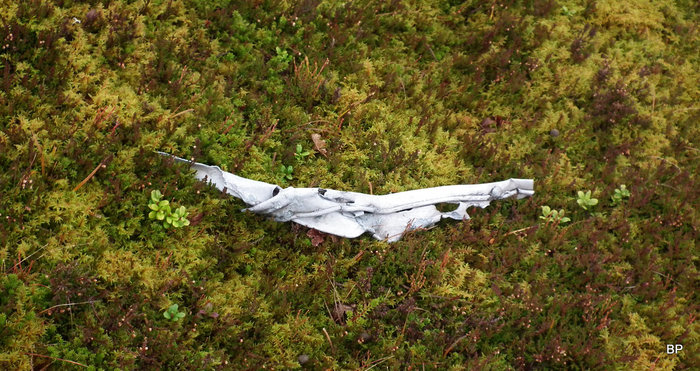 So what's the story?...
The accident happened on the 14 of November 1943. A Wellington Bomber HF746, of No20 Operational Training Unit, was on a navigational exercise from the base in Lossiemouth. Weather that night was described as "a violent snowstorm", so I suppose that bad visibility was the probable cause of the crash. The plane simply flew into the steep, northern side of Ben Rinnes, exploding in flames and killing both crew. It was described by a witness as "the most complete burn-out he had ever seen". The wreckage was scattered over a large area and many small pieces have been now overgrown by lush vegetation so I bet we didn't find everything.
Kevin checking the grid ref: 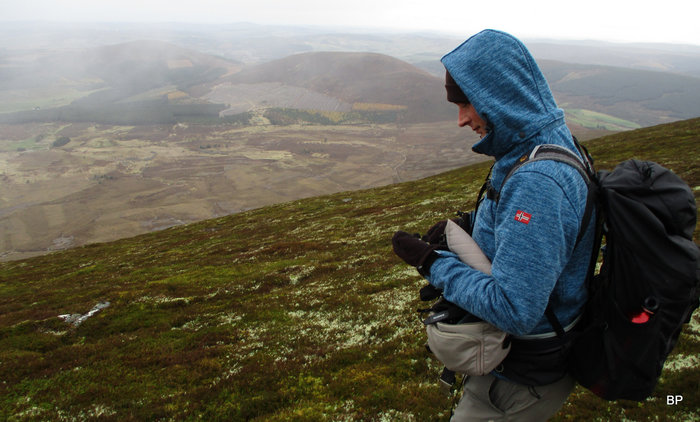 As we moved downhill, we located several piles of metal, all roughly between 780 and 750m. 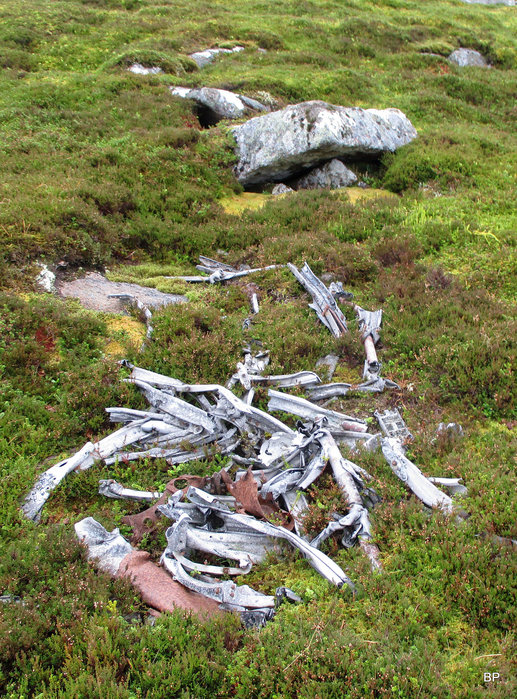 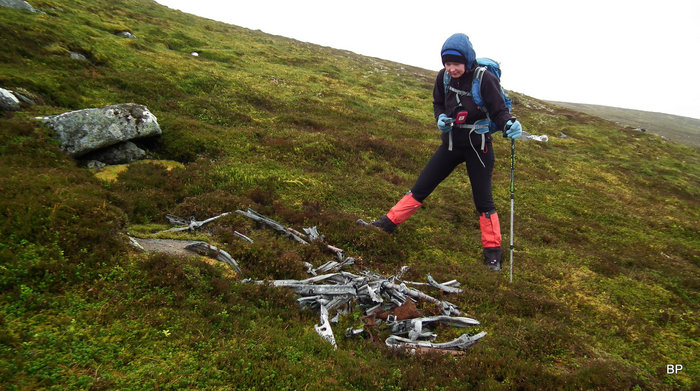 As I stood over the sad remains of the Wellington Bomber, stepping carefully so I didn't disturb anything, I tried to imagine the seconds before the disaster. Did the crew realize they were flying into a trap? Did they spot the mountain side emerging out of the blizzard and tried to avoid it but it was too late? Or did they stay blissfully unaware of the danger till the last moment?... We will never know.
Kevin spotting another small part: 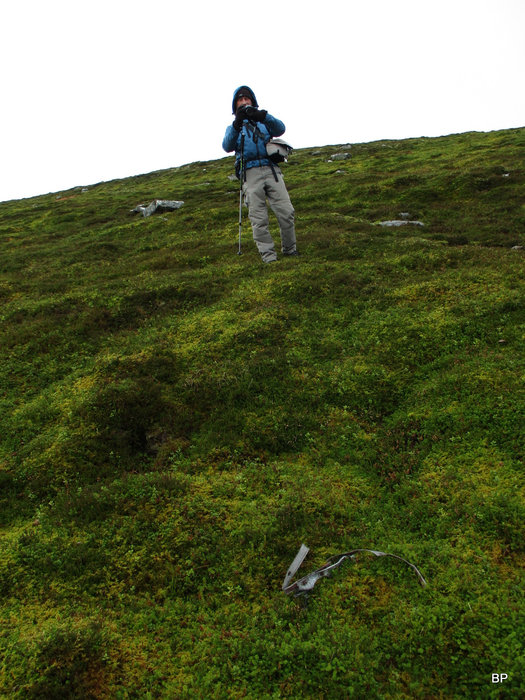 More wreckage down the slope: 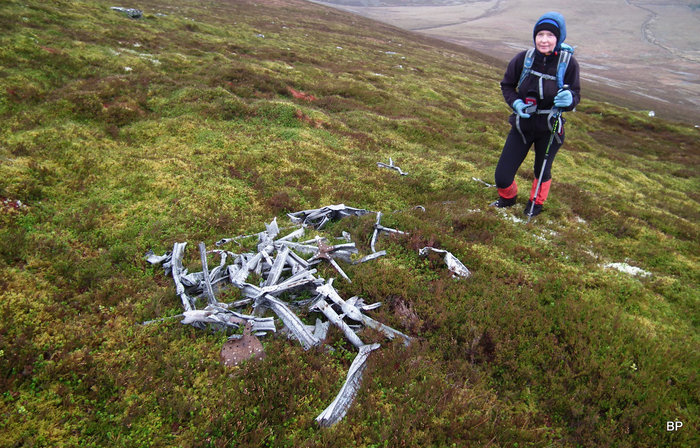 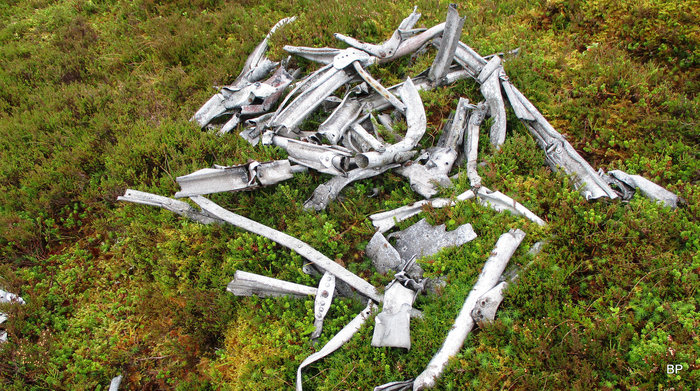 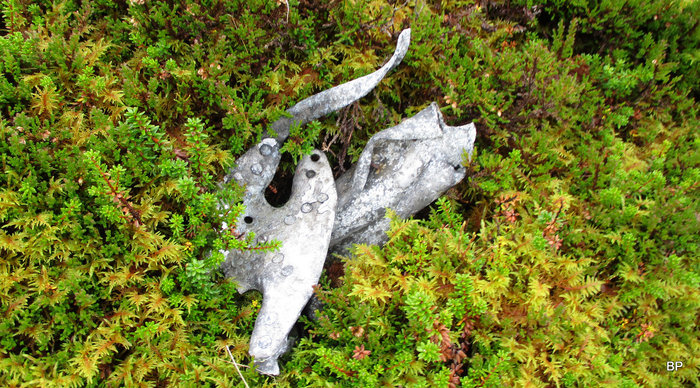 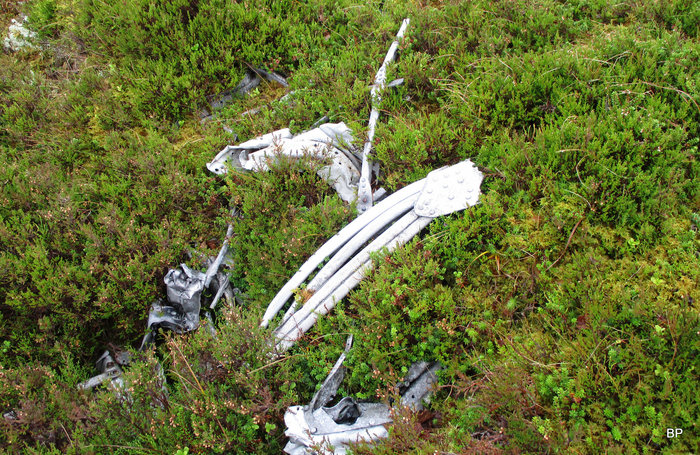 This small part of aluminum still has some original paint on it: 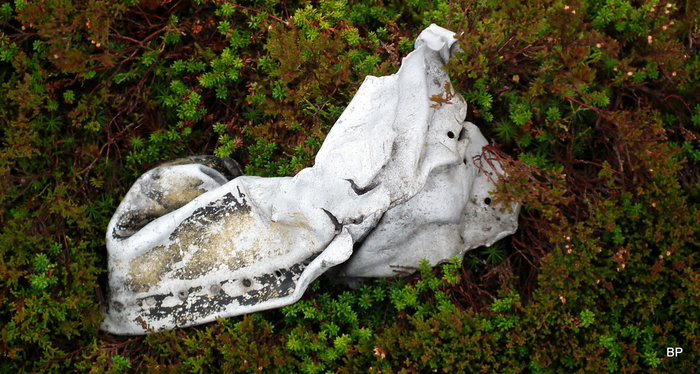 As we were already half way down, we decided to simply continue the descent to a track at the bottom of the hill. The ground is steep-ish but very pleasant to walk on, very spongy due to the extensive moss cover. Lower down, heather takes over from moss and the surface becomes more bumpy, but it is still easy going compare to some slopes we had descended in the past.

At the height of 690m, close to a tiny burn, we came across the last piece of wreckage. My first thought was, an exhaust or perhaps hot air pipe, but sources claim it is a section of main spar and nacelle structure: 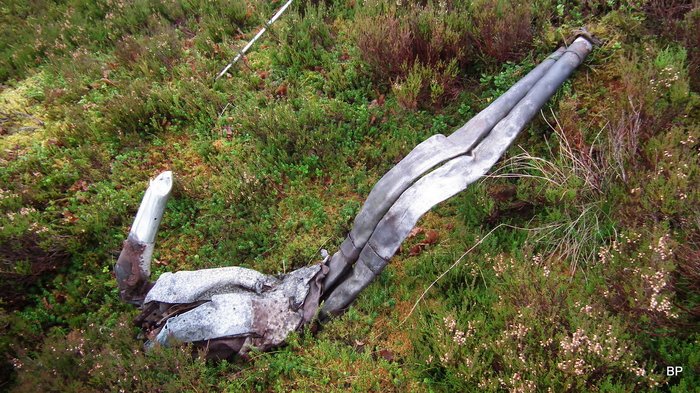 To reach the track below the mountain we descended carefully along a small burn: 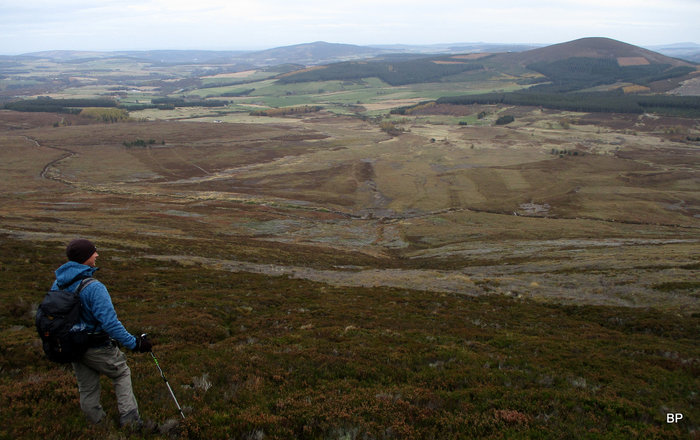 Later, we came across a line of grouse butts with a vague path leading down beside them. 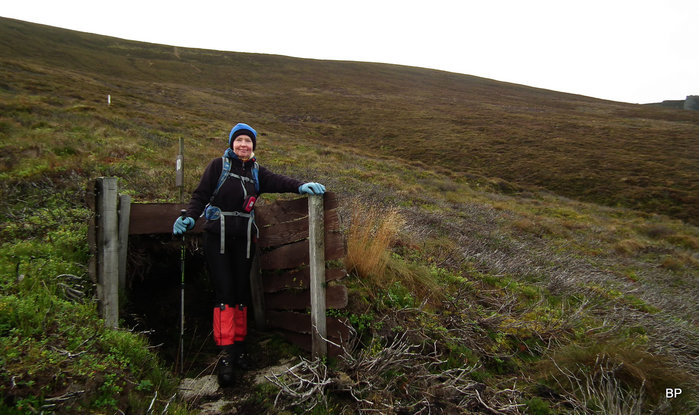 Down on the track, it was an easy walk back to the road and the car park.
Looking back at the northern side of Ben Rinnes from the track below:

Well, maybe it wasn't the longest of days, but we enjoyed discovering the dark side of Rinnes. Maybe one day, a memorial plaque or cairn will be built close to the summit, just to make the visitors aware that Ben Rinnes is not always such a nice hill. A monster lay beneath...
For more photos of Rinnes in better weather, including the western tors, see my older report HERE.

And please, remember: all military crash sites are protected by law and removing, destroying or damaging any wreckage is illegal. These sites are part of our national history. Please, treat them with respect.

Re: The dark side of Rinnes

Thanks for your report. I’ve been up Ben Rinnes many times over the years as it’s the nearest to me. I knew about the wreckage but have never tried to locate it. Interesting to read about the circumstances of the crash. It’s a sad fact that many of our mountains have such sites, when navigation relied on maps, compasses and stop watches so crews were sometimes descending into mountainous terrain when they thought they were elsewhere. I’ll make the effort to find this site sometime.

Re: The dark side of Rinnes

DomBoyd wrote:Thanks for your report. I’ve been up Ben Rinnes many times over the years as it’s the nearest to me. I knew about the wreckage but have never tried to locate it. Interesting to read about the circumstances of the crash. It’s a sad fact that many of our mountains have such sites, when navigation relied on maps, compasses and stop watches so crews were sometimes descending into mountainous terrain when they thought they were elsewhere. I’ll make the effort to find this site sometime.

This site is not well known compare to some. Rinnes is such a popular hill yet so few walkers are aware of the Wellington crash. Very little info about the circumstances of the accident, too. As in many cases of such incidents in Scotland, bad weather was probably to blame... It is important to underline, that many of those lost crews were on training flights, they were still young and inexperienced, therefore more likely to make a mistake.
One of the links at the end of my report has detailed grid references to the biggest piles of wreckage, but even without the GPS, once you find the first pile (less than 100m below the summit), it is easy to follow the trail downhill.