NB: All Tier Guidelines were followed for this day out

So the time had come, I looked at my Munro Map on the wall, and seen I had one little triangle left to complete the Ullapool Region. Seana Bhraigh. This was to be my first "area" of Munro's to be complete. I hadn't heard an awful lot about this one, just that it was remote, and there were two ways to attempt it.

One was the long walk in from Inverlael, the other was a cycle in from Oykel Bridge/Corriemulzie Lodge.

Since I had completed the Beinn Dearg Four around a month earlier, I opted for a change of scenery and picked the Oykel Bridge Route. I looked at the Map and got in touch with Corriemulzie Estate, they said the estate path was open to the public; but may not be open the whole way.

So I set of from Inverness at 6am, Hoping to start on the bike at 8am. Time was getting more and more limited as the days get shorter so I wanted to make it in good time.

The drive to Oykel Bridge turned out to be a disaster.. For a start the sat nav on my phone took me left at Ardgay, I thought it might have been a shortcut, but no, 30 minutes down a single track road to a dead end. Thanks Sat Nav.

An hour wasted there meant I got there around 9, not helped by the fact I went into a farmers field by accident before Corriemulzie Estate. He came out asking what I was doing

Not surprised as I was in a little white van.. must have looked suspicious! Anyway, he pointed me in the right direction. So thanks for that!

A few tips for anyone trying this route, as of November 2020:

The road is closed around 4km North of Corriemulzie Lodge, it is closed above the Old Schoolhouse Bothy. But you can still park at an old quarry.

The road can be a nightmare to follow, a few diversions and even my viewranger wasnt the greatest,

The road is suitable for most cars, if you have a Ferrari or the like then I wouldnt attempt it

So I finally set off down the long track to the base of Seana Bhraigh. I have to say the paths were excellent, Once at Corriemulzie Lodge it gets a little rougher but nothing too bad.

The whole drive to Oykel Bridge was covered in fog, but the forecast was for clear tops so I kept my fingers crossed. I got soaked cycling in because of the thick mist.. 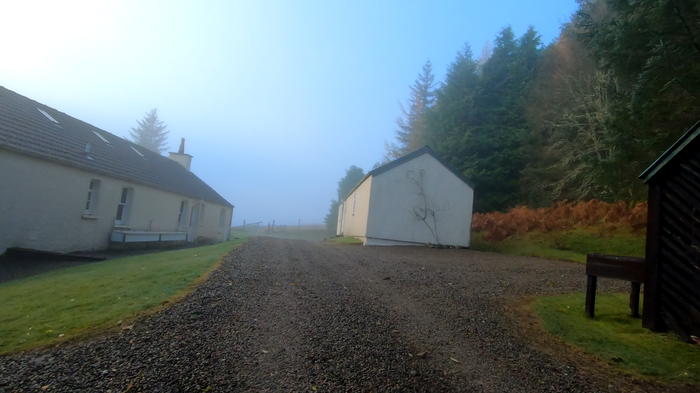 But once I got closer to the bottom of Seana Bhraigh, I could see glimmers of blue sky. I had a good feeling about this one.

I could tell from here this one was going to be special. It took me about 1hr 30mins to cycle down the path, this included stopping taking videos/drone shots

The path then forks off to the right, there is a little cairn so I chose to leave my bike there. Nothing to chain it around, but I doubt it would get stolen there!

Handy Place to drop the Bike

This place felt so remote. Even though it was only a pretty short cycle in, it is miles from any road. I seen so much wildlife on the way in, including a HUGE golden eagle! It looked as if it was flying in slow motion. Unfortunately my GoPro was strapped to my bike

Once I started to walk, I was soon out of the fog. I was then rewarded with this:

Out of the fog

Out of the fog

I have to say, I probably spent more time looking back at the views than ahead towards Seana Bhraigh. It was stunning!

After around 1hr and 45min I was close to the top of Seana Bhraigh, Its not until I reached the Summit Cairn that I realized how special this place was. Funnily enough there was someone else there before me

he had walked in from Inverlael, and had a huge walk ahead of him so made his way after 5 minutes.

The view of the cliffs and Creag an Duine was insane, I could have sat all day and admired it. The views were spectacular in every direction!

I literally cant post any pictures that will do it justice, But I have attached my Youtube Video at the end if you want to check it out!

I also got to fly my Drone, Unbelievable to get such a calm day in November. Again the footage is better in video form, but here is a snapshot of the cliffs: I sat here for about an hour

I literally couldn't get up and leave it. What a stunning place, I had originally planned to do the scramble on the ridge across but it looked a bit daunting. If I was with someone else then I probably would have, but being solo I chickened out.

This was my 30th Munro since lockdown ended, and definitely my favorite so far. I think its because I wasn't expecting so much of it, but boy did it deliver!

It also felt good getting home and scratching off the final Ullapool Region Munro.. and what a way to do it!

There is no doubt I will be back here, and scramble that ridge in the summer.

I document every Munro that I do, for my own memories and for anyone interested. So here is the video if you want to check it out;

What a day! I hazard a guess that the wonderful weather contributed no little to this being your favourite Munro so far.

And nothing to beat emerging from the cloud above a cloud inversion, even for the hundredth time

Alteknacker wrote:What a day! I hazard a guess that the wonderful weather contributed no little to this being your favourite Munro so far.

And nothing to beat emerging from the cloud above a cloud inversion, even for the hundredth time

Yeah weather definitely contributed! Also just liked the remoteness. My last few Munro’s have been in rain so that maybe made me enjoy it all the more

There is no doubt I will be back here, and scramble that ridge in the summer.

If you do then stay overnight at Magoo's bothy and spend the evening admiring where you have been.

Looks like you had a cracking day for November. Good wee video as well.

Kinshusrst Kid wrote:There is no doubt I will be back here, and scramble that ridge in the summer.

If you do then stay overnight at Magoo's bothy and spend the evening admiring where you have been.

Yes might need to do this when the bothys re-open

malrobb wrote:Looks like you had a cracking day for November. Good wee video as well.

Yeah was really lucky with the weather! Thanks for watching