On our quest to visit and photograph local crash sites, we haven't been lucky. The famous sites, like the Lancaster on Beinn Eighe or the Callater Canberra, there is plenty of info online and in books, but I found a few accident spots close to Inverness which are difficult to find. One in particular, let's name it Menace Site for the sake of this blog, we have no grid reference for, only a rough idea where to look. We have already been out looking for it twice, no luck. I'm not saying anything more about it till we locate it. It's a weird kind of fun, blind search

But before we started looking for the Menace, we wanted to visit another place where wreckage can be found. An Armstrong Whitworth Whitley bomber crashed on the high moorland above Cawdor while on a training flight. I was very touched by the story connected to this accident and wanted to pay my respect to the young men who lost their lives on that dark night in May 1943.

Irrespectively of our crash site agenda, Cawdor Moor turned out to be an interesting area to walk and explore. Yes, there are peat hags, lots of them. Yes, in wet conditions it would be a pain in you-know-what, the track we used in approach to the higher plateau requires multiple river crossings, which would be impossible in spate. In addition to that, we picked a windy, showery day with lingering cloud, as a result our search was cut short and we didn't locate all the wreckage. Nothing lost though, we'll go back again next year and search a wider area.

Track_CAWDOR MOOR CRASH 20KM.gpx Open full screen  NB: Walkhighlands is not responsible for the accuracy of gpx files in users posts
Kevin delivers in the area of Cawdor regularly so he knows all access roads well, including good spots for parking. We started from the entrance to Assich Forest, where there is space for a couple of cars by a metal gate. We walked through the autumnal woodland: 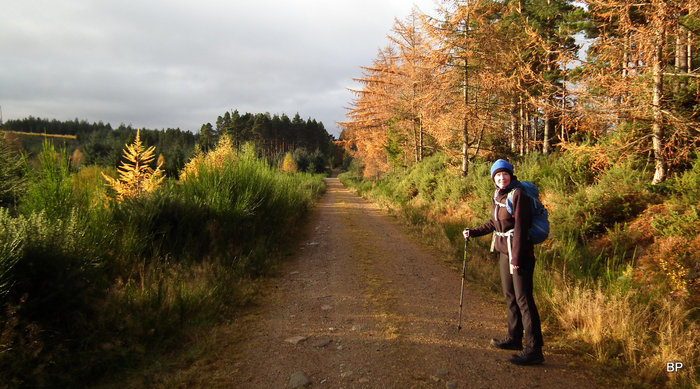 We passed Dalcharn and crossed a bridge over Allt Dearg: Kevin told me there was another farm higher up the track - a newly built one. He had been to it with a delivery only a few weeks earlier and remembered two tracks heading past this farm onto the open moor. A quick look at the map and we realised, we could actually do a circular walk.
Views from the track after leaving the forest:

Having exchanged pleasant greetings with estate workers, we continued on the left hand side track and soon reached the entrance to an interesting looking gorge. I assume that the river is still called Allt Dearg at this point (25k map is not precise about it) so I will call it the Allt Dearg Ravine. The track actually descends into the ravine: 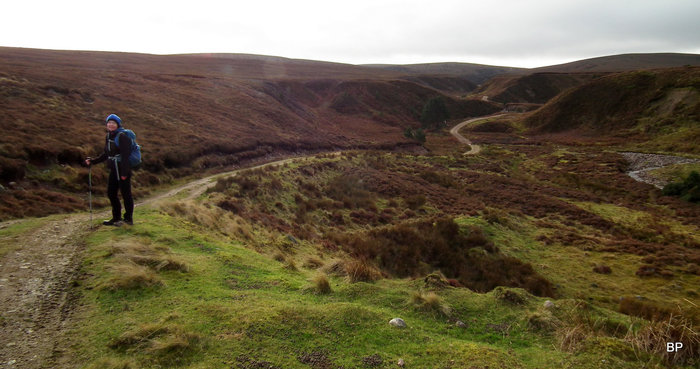 View back north to Moray Firth. Chanonry Point is visible just left of the white pylon:

I was pleasantly surprised by the Allt Dearg Ravine. The only problem we encountered: fords. The tracks crosses the river at least 10 times if not more (we lost count). In spate, this would be a nightmare walk! 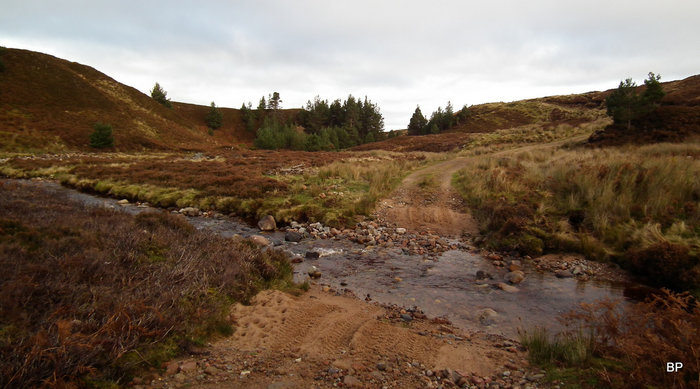 Allt Dearg in the ravine: One of many small waterfalls: 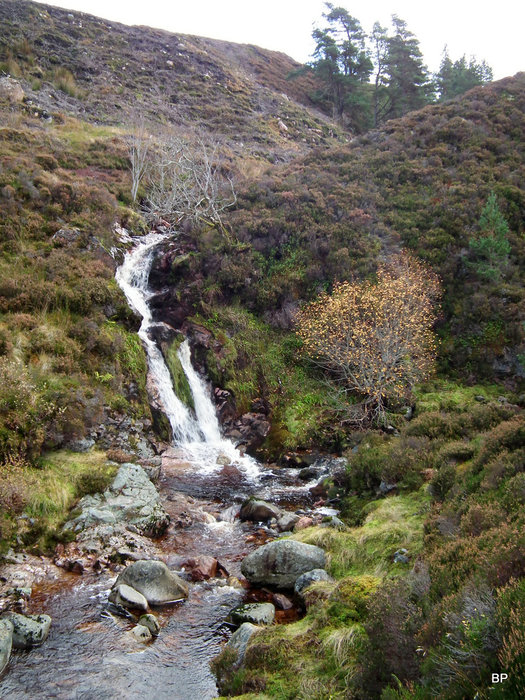 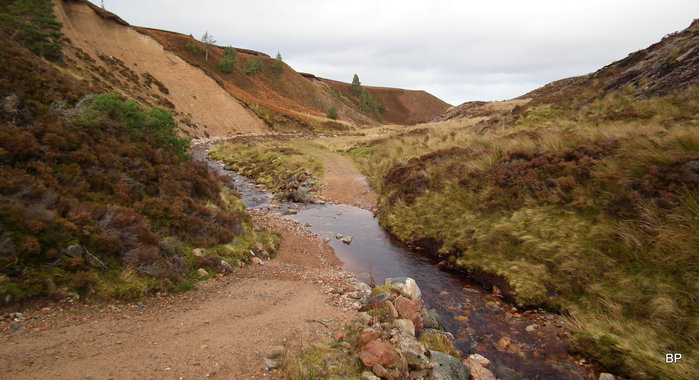 Kevin had a sock malfunction and had to take a break to adjust his footwear. We stopped below one of several fresh landslides: 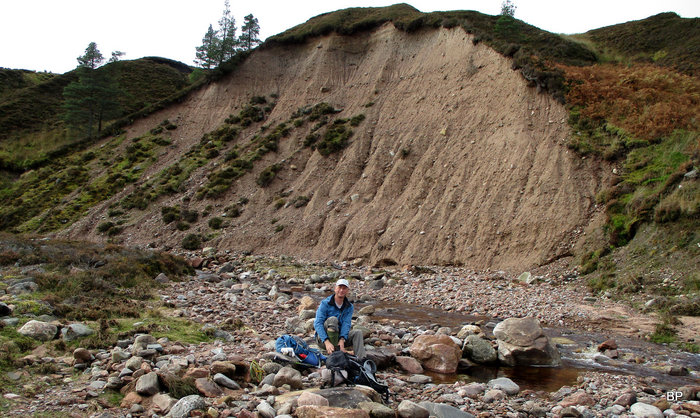 Eventually, the track climbs out of the ravine and onto the open moorland. Weather was deteriorating as we walked on, with showers passing over. As soon as we were out of the ravine, the wind hit us as well. It wasn't drastic, but very cold and unpleasant 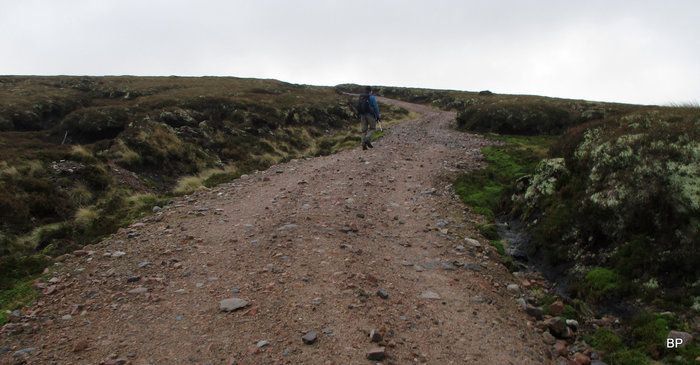 Looking back into the Allt Dearg Ravine from above: From my earlier research I knew that the crash site is not far away from the track but most of the wreckage is well hidden inside large peat hags. We had a six-digit grid reference from The Air-Crash Bible and without it, we wouldn't even know where to start. The whole area is one giant labyrinth of peat hags: 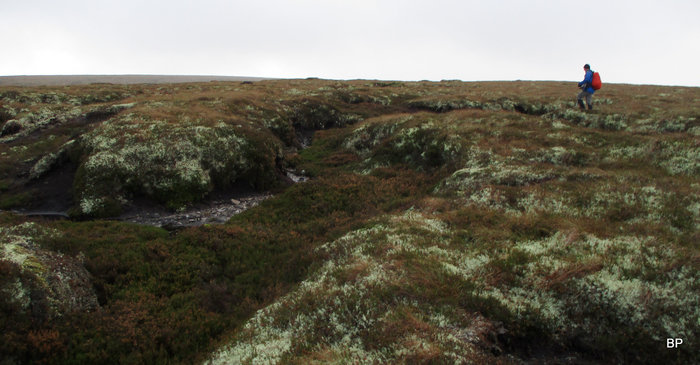 We started from the grid ref we had and walked around, hoping over hags and checking every hole big enough to have a metal piece in it. It was still showery and windy, but we were persistent...
Kevin descending into a peat hag: Eventually, he came across something mangled and made of aluminum. We knew we had found the first piece of the lost Whitley: 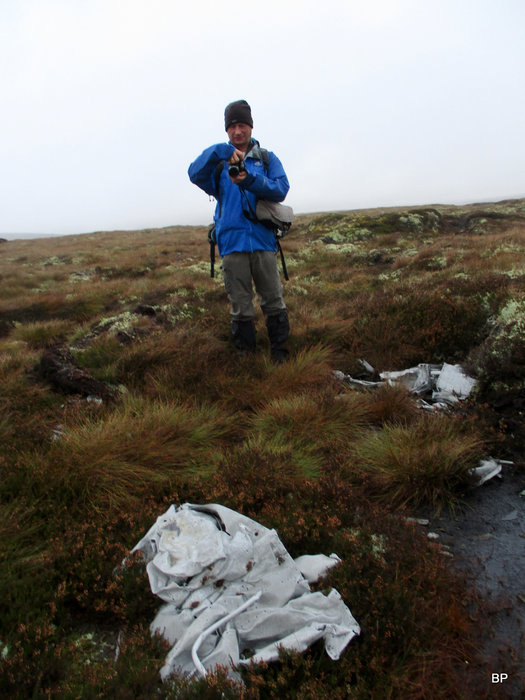 We checked around and located several more pieces of wreckage: 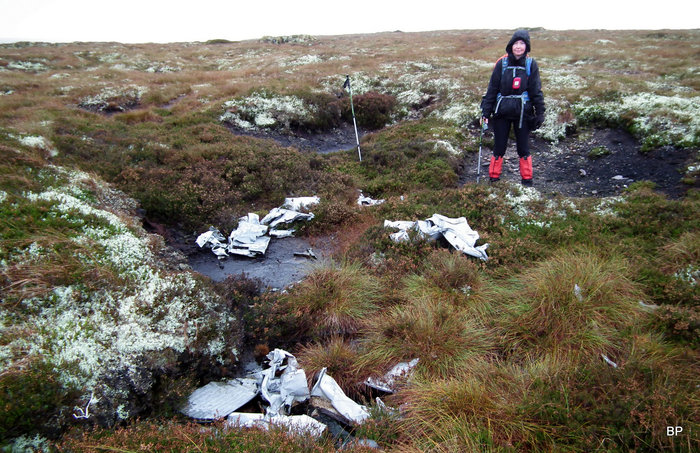 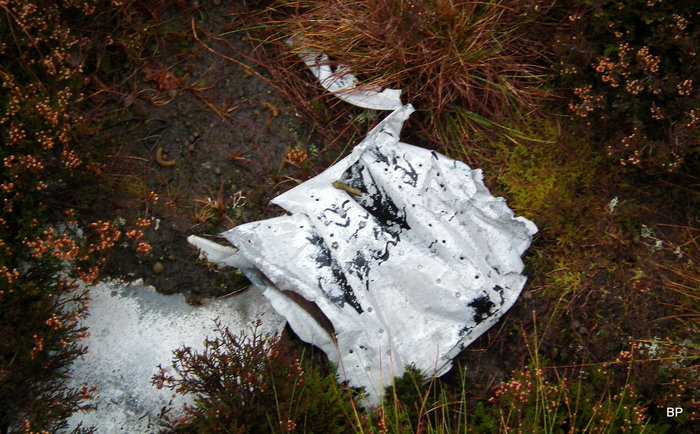 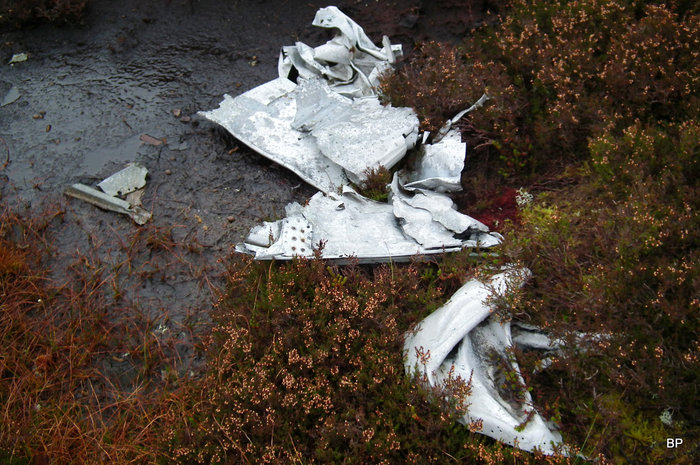 So how did this plane end up on Cawdor Moor?
The plane was out on a cross country navigation and bombing exercise from the nearby RAF base in Kinloss. It was the night of the 16th/17th May, 1943. The crew, instructed by Flight Lieutenant R.W.P. McFarland, were also ordered to drop practice bombs on a range at Clunas (south-east of Cawdor). Weather was cloudy. At about 2am, while trying to locate the bombing range, the plane flew into the rising ground of Cawdor Moor.
As hours passed and nothing was heard from the Whitley, it was declared overdue. Then, suddenly, at 05:23 in the morning, a phone call from one of the farms near Cawdor. On the end of the line was one of the crew, Sergeant Padley. What was he doing on this farm and where was the plane and the rest of the crew???
Padley reported that the Whitley had crashed. Most of the crew survived the accident but they were all injured, some badly. He was the only one strong enough to walk, so he had left the crash site and stumbled down the moor, over peat hags, bog and heather, to reach a farm and call for help.
I'm trying to imagine Seargant Padley's march over Cawdoor Moor. The comfortable track we used to reach the site today didn't exist in the 1940ties. It was spring but even in May, nights and mornings can be cold. He must have been in shock and bashed all over his body after the crash. When asked on the phone about the exact location of the accident, he couldn't say... He was confused. All moorland looks the same.
And today, standing at the crash site and looking around, I understood his confusion perfectly...
Every peat hag looks the same... 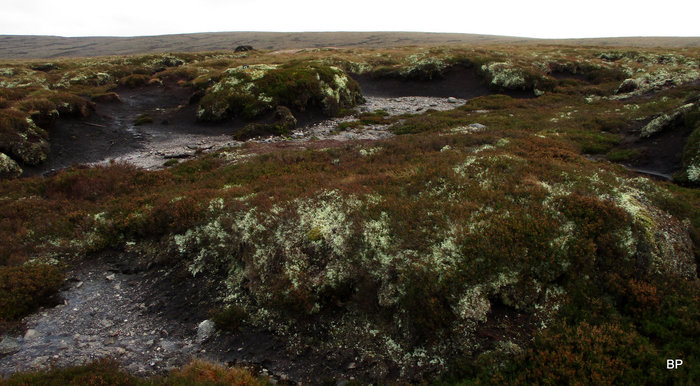 The search for the lost aircraft started immediately. Rescue groups set out from both Kinloss and Dalcross bases, also three Avro Ansons from Kinloss were dispatched to begin air search. A detachment of RAF Regiment personnel were also sent to help with the search.
But only at 10:55, over 5 hours after Sgt Padley's phone call, the accident site was found. Sadly, four of the crew had already died of their injuries. Two were still alive and sent to hospital, but one of them, Sergeant R.A. Hartwell, passed away two days later. He was only 19 years old. He is buried at Kinloss Abbey Cementary.
It's another heartbreaking story of young souls lost to the efforts of war. We stood at the crash site for a few minutes in silence an again, in the light of the tragedy of the past, our current problems seemed so small and insignificant.
**********
We knew we hadn't yet found everything, there is more wreckage hidden in peat hags around, but after hours of searching we were running out of time and decided to go back. We will definitely visit this site again - we deduced that we missed the rest of the wreckage by about 100m, but in this terrain, 100m means fifty peat hags to check, so plenty of work for our second visit!
The search area seen from across the ravine:

To make a circular, we decided to cross the ravine and join a track circling Carn a'Choire Odhar. This required some pathless heather bashing: 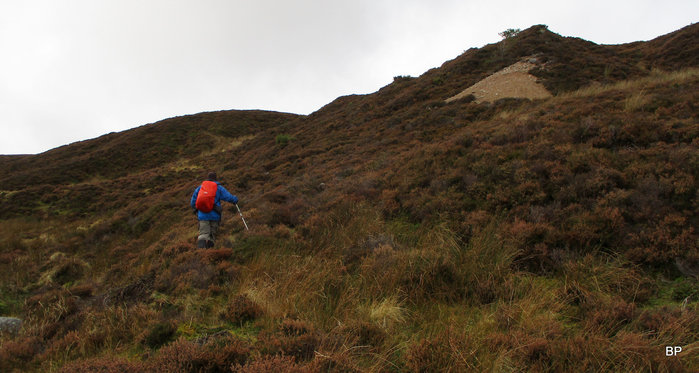 One last look at the ravine: 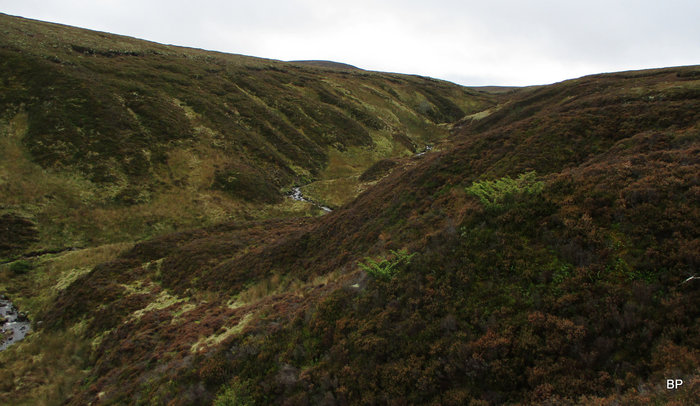 Inverness from above. Weather has slightly improved in the afternoon:

The track took us all the way back to Dalcharn - no tricky river crossings this time:

Overall, it is a very nice area, much nicer than we had expected. Yes, the peat hags can be off-putting but the excellent network of track makes walking here much easier. It is possible to reach the Graham, Carn nan Tri-tighearnan, from this side and maybe one day we will try. It is close to home and now, in the days of tiers and restrictions, it's handy to have something to do locally.

I'll stay local in my next TR, a quick Sub this time