I think I will blame this one on Jaf. I think it was him who gave me the shout, rather than the other way round. Forecast had been reasonably hopeful, but as seems to be the case of late, trended downhill the nearer the day came. Met Office looked the more negative, but MWIS and couple of others still looking decent, so we decided to go for it.

Uneventful run, pleasing to see Schiehallion free of cloud and before long we were unloading bikes off the car roof. Once the 7.30 Tesco Express for Inverness was out the way, we crossed the crossing and got on our way, with daylight now coming on. Wasn't too long before we were getting a bit of a headwind, which was a portent of things to come. Also, not helping was the state of the road which had turned to a gluey, porridgy mix, due to a lot of timber traffic and recent rains. 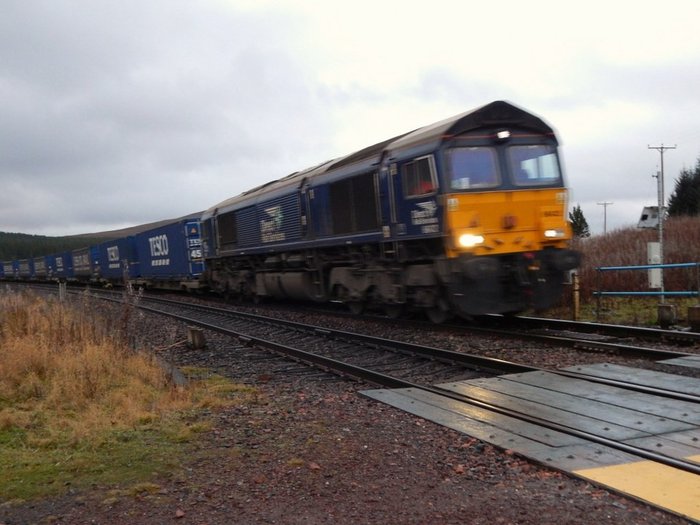 The 7.30 Tesco Express for Inverness.

Despite that, it was a nice cycle down Loch Ericht, past the dam and various pretty, estate houses. Didn't meet anyone which perhaps suggests something, however we powered on at crawling speed, grateful that the route generally didn't seem to have too many ups, till we passed Ben Alder Lodge, out into more open territory. We looked at the option of taking the path to the left, but after the recent rains, I was wary about taking my bike over rough, boggy ground, so we opted for the longer route via Loch Pattack and the "shoogly" bridge. Loch Pattack was full up to the brim, so when they say go round Loch Pattack, in some bits we were going in Loch Pattack

The gravel and peaty bits made for heavier going, so it would be hard to argue whether this had been a wise move, or not, but in general the track was firm, if a bit stony, which was no fun for Big Jasper's back. The shoogly bridge duly materialised, but of more concern was the occasional smirr and shrouded hills, one of which presumably we would be ascending. Aside from catching the pedals on some of the side chains, the bridge was easily crossed and didn't seem too shoogly at all. 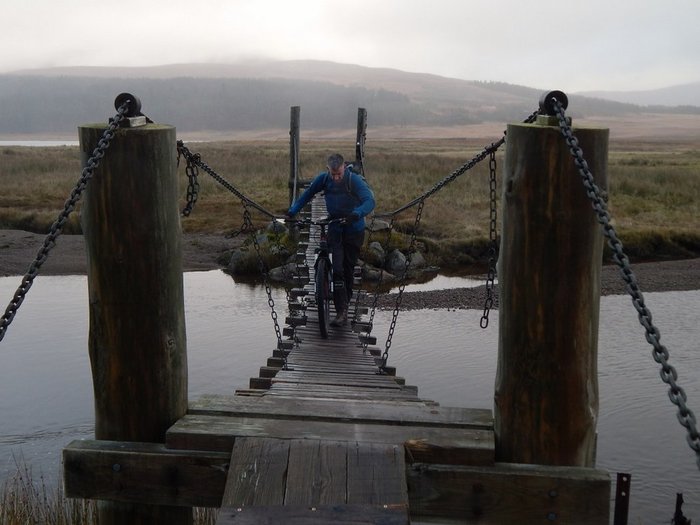 One of many, though mostly not willing to pose.

Culra eventually appears in sight, but still takes a while to get there. I think we were just under an hour and a half to there. After a wee poke in the bothy door to look for asbestos, we made round the back and set off up the hill, with wind and precipitation becoming more evident, if not worrisome at this point. I found it quite a struggle up the steep slopes, my leg muscles still in paralysis from the cycle

No such worries for Big Jaf tho, who was away like a whippet, as usual. 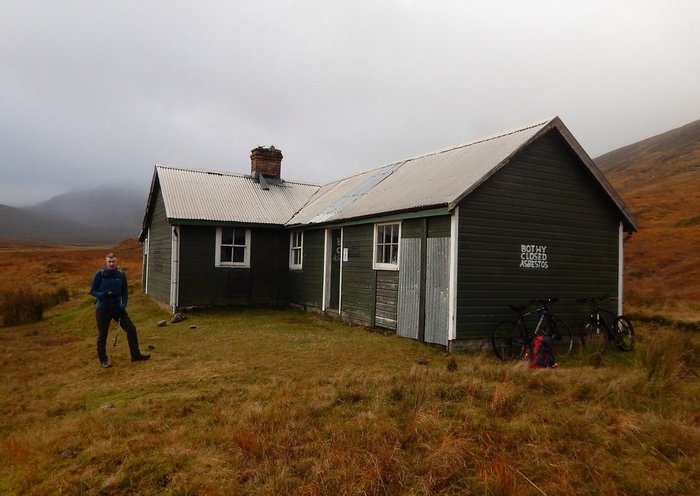 The gradient began to ease, but the wind and mist did not as the start of the main ridge emerged to our left. It wasn't long till we were moving over snow, which didn't make things easy on the stony ground, as the wind began to whip at our clothing and drive the smirr against us. Fortunately, we could still easily make out the track most of the way to the summit, which came as a very welcome spot for some shelter and a bite to eat. Occasional glimpses of sky gave us hope that the forecast improving weather was on its way. It was on its way ........ somewhere else 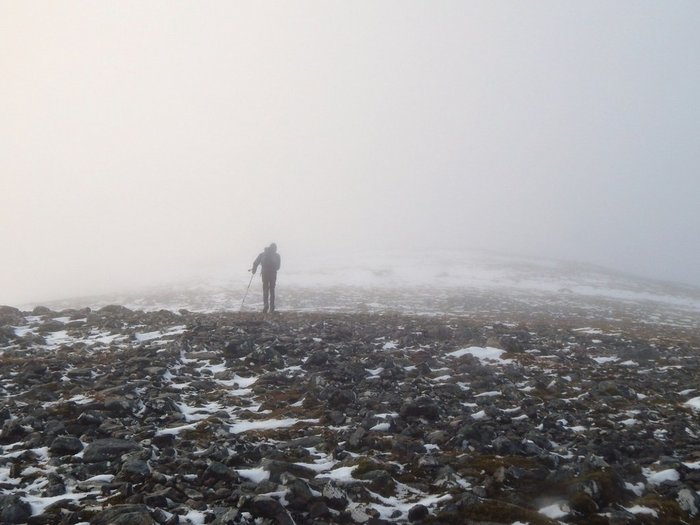 Start of ridge to Carn Dearg. Start of the struggle, too. 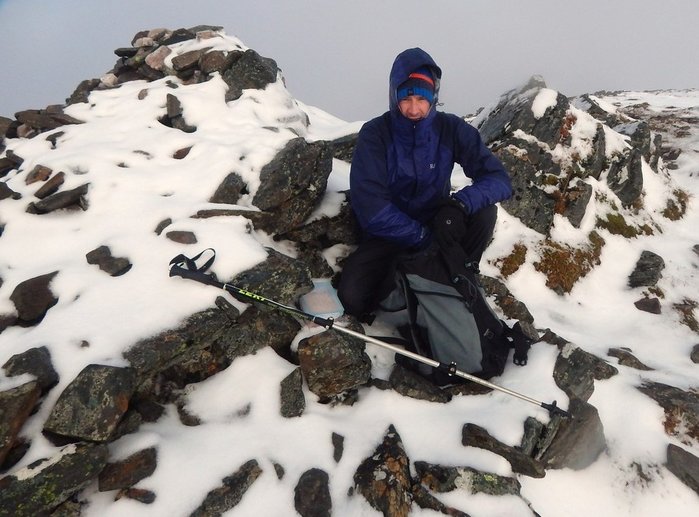 Yeh, Munro #1, Carn Dearg. Already getting cold and wet, but only grub we had up top. 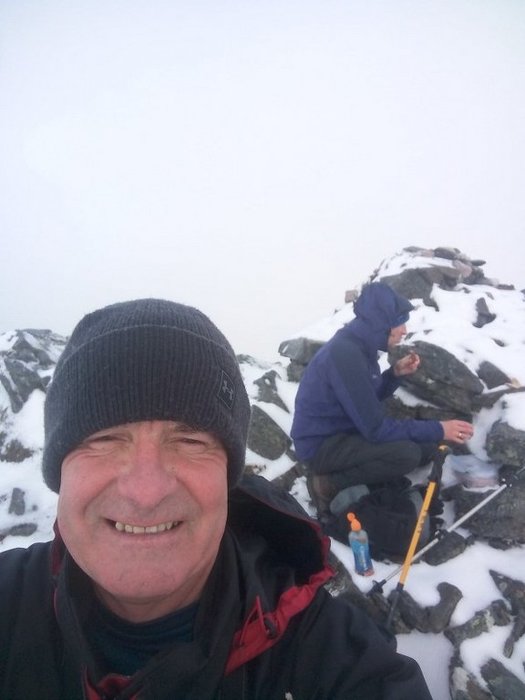 By now the compass was out and it came in useful to keep us on track from Carn Dearg, over An Diollaid, toward Aisre Ghobhainn. We were now getting blasted by freezing rain, winds which must have been gusting at 40mph+ and 20-30 yard vis. Stones which appeared wet were actually coated in ice and slippy as anything. The loch's appeared as did a brief glimpse of blue sky, then everything went wild again. It was no easy job keeping the feet due to the wind and steep, underfoot conditions. I slipped on more than a few occasions and strained my groin, or somewhere near it I was glad when we got clear of Aisre Ghobhainn, onto safer ground, but now we had the challenge to find the small cairn at the summit of Geal-Charn, effectively blind, although we did have a quick check of the gps, to ensure we weren't drifting off track too much. Aside from a quick pic, we were not for lingering and there wasn't much small talk either, except perhaps, brief mention of "200." We carried on pretty much the same bearing, dropping down to a bealach, before a short, but tiring climb to the summit of Aonach Beag, Big Jaf's 200th Munro! Well done, mate, it has been great fun!

Alas, the celebrations were no more than a pat on the back and a photo to mark the occasion. This was no place to dilly-dally and time was getting on. The chances of not making it back before dark were beginning to grow. I don't know exactly why, other than haste to make time, a lapse in concentration after all the excitement, the fact my route notes had deteriorated into mush, or we never agreed on who was in charge of navigating, but after a hurried glimpse at the compass we set off. Off NW, down the wrong ridge, when we should have been going SW

Fortuitously, conditions were starting to brighten a little, as the cloud began to thin. Looked like a big mountain off to our left, whereas below us, the ridge dropped down to nothing and the hill off to our right had no snow on it. Mmmmh, this doesn't look right, Charles? At last, we can see where we're going, Beinn Eibhinn, but not before a mini diversion down the wrong ridge :)

A further check of the map and gps, showed we were off track, right enough. Damn! I think we had only dropped, maybe 100-200m at most, but climbing back up was tiring and no fun, as my torn muscle told me. Probably cost us about half an hour, or so. Typically, the summit was shrouded in cloud as another squall blew in, but soon the route to number 4, re-emerged. What to do? We knew the route out was a long one and Big Jasper's gloves were long saturated and freezing the fingers. We tried to keep deliberation short, but sensible. We reckoned that we should at least be on the bikes in daylight, so decided to squeeze in Beinn Eibhinn. Yes, I'm a poet, who doesn't know it A wet look back over to Aonach Beag.

It was hard going down the ridge. It was hard going up the ridge. Why couldn't the first cairn have been the summit?! At least things had opened up a little, as we got the first views of the day. Not much, but it was re-assuring to see the way down. Unfortunately, as we made our way down, it was not re-assuring to see that we would have to ascend back up to the stalker's path, even though that is only 50m, or so. Jaf soon blasted up, but it was a struggle for me. Time for my "can we have something to eat?" excuse to kick in

We had managed no food or fluids since the first Munro. Also, seemed an appropriate time to get out the hip flask and toast our 200's, as neither of us had managed to do so at the time. Cheers, Jaf, well done. It has been fun! There's that damn poet thing again One of two summit cairn's. Dropping back down to the bealach between Aonach Beag and Beinn Eibhinn. We then beat a hasty retreat back along the Bealach Dubh, enjoying being out of the cold wind. It would have been a nice walk any other time, but we didn't hang around much for views of the spectacular Lancet Edge, or Ben Alder, Jaf walking, Jim running

After several false dawns Culra bothy finally appeared and we quickly got on the bikes. Darkness coming in, we chose to retrace our route round Loch Pattack. Despite the fatigue and it being dark about half way, we were back at the car in an hour and a quarter. Heading out the Bealach Dubh. Waiting for him, again! Great to be back at the bothy, asbestos, or no'! Sun going down beyond Loch Pattack.

It had been a tough day, a bit on the edge with the weather. Wouldn't have wanted to have been up there too much longer, or too much worse, but aside from the one navigational faut pas, we had kept safe, were feeling well chuffed with our efforts and an unforgettable 200! In addition, we learned a valuable lesson in mathematics and or, meteorology - the risks of interpolination

(sic - amusing wee memory of my First Mate at sea, 1978, who either deliberately, or accidentally, referred to interpolation as interpolinating). Anyway, I digress, as you might have noticed

-just because one has several forecasts does not mean the actual weather will lie somewhere in between the best and the worst. It could well be worse than the worst! Interpolination is a risky business

Once again Jimmy, another great report. Can honestly say that so far for me, out of 201 munros, this has been the toughest day on the hills, due to the conditions and especially the freezing temperatures. I look forward to doing Ben Alder in shorts and t shirts next year

Also the toughest tour ever for me. I made it back to the car in Dalwhinnie at 1.30am!

I thought we were in the dark, but you shaded it! Main, thing is, to gwt home mind you!

Yeh, hard to argue, Jaf, tho sine of these scorcher up in the Cairngorm had me fair jiggered too

Big Jesper wrote:Once again Jimmy, another great report. Can honestly say that so far for me, out of 201 munros, this has been the toughest day on the hills, due to the conditions and especially the freezing temperatures. I look forward to doing Ben Alder in shorts and t shirts next year

1Magnus wrote:Also the toughest tour ever for me. I made it back to the car in Dalwhinnie at 1.30am!