Plan A had been an ambitious holiday in Nova Scotia and Prince Edward Island ... needless to say that was quickly kiboshed given the events of 2020

, and we rather hurriedly made alternative holiday arrangements for a few days at the seaside in Scarborough, followed by a week at a cottage in Strathpeffer. Our weather was a bit mixed for the Strathpeffer week, but the forecast was for two Fairly Good Weather Days on the Wednesday 19th August and Thursday 20th August. There was a bizarre weather "twist" in that a Named Storm, no less - Storm Ellen, in fact - was due to blow in overnight BETWEEN the two good-weather days, but predicted to have pretty much blown itself out by 9 o'clock on the Thursday morning, leaving a nice clear day's weather in its wake

.
Needless to say, I took advantage of the weather window for a bit of walking. It turned out to be a long and knackering (though rewarding) day's walking on the Wednesday over the four eastern Fannaichs, and I really had to drag myself out of bed early on the Thursday morning for the second day's walking, particularly as Storm Ellen was still rattling the windows at that point

! However, the real motivating factor was that if I managed to complete my planned route over the middle three Fannaichs, then I'd reach the Two Hundred Mark in my Munros tally - something that I'd never have considered possible just a few years back, to be frank, and not a milestone that I'd expected to reach during the ill-starred year of 2020, so I'd be more than mildly chuffed if I pulled it off

...
As per the website's route description, I parked at the fairly obvious parking area off the A832 southwest of Braemore Junction, past the second of two sections of forestry to the left of the road and just past a gated & signed track entrance. I set off up said gated and signed track, which leads to the environs of the very scenic Loch a' Bhraoin.
There is a slight deviation from the website's route description near the start of this route now: due to some current construction work (renovation of the old boathouse at the north end of the loch, plus also a minor hydro scheme by the looks of it), walkers are asked to take one of two signed diversions, the western one joining the loch further along its northern shore and heading south from there, and the eastern one heading through some forestry to emerge near the footbridge over the Abhainn Cuilaig close to where it joins the loch. It was a pleasant enough walk through the forestry on a well constructed new track, and Loch a' Bhraoin was looking lovely in the sunshine as I emerged from the trees, with the first of many glimpses of the cockscomb ridge of An Teallach in the distance: I headed off on the faint and muddy path (improving further down) that heads southwards down the glen of the Alt Breabag, between Meall a' Chrasgaidh to the east and Sgurr Breac's northern ridge to the west. Before long, it was necessary to cross the Allt Bawbag .. sorry, Breabag

... using some boulders as stepping stones - I managed this largely dryshod on the way out (although on the way back I'd lost patience and just splashed across, which is perfectly feasible as long as the burn isn't in spate). On the eastern side of the Allt, the path improved quite a bit, evolving into a fairly well constructed stalkers' path heading steadily southwards. I'd be glad of that on the way back, but I didn't get to enjoy it for too long on the outward route, as it was now time to tackle the pathless and fairly unrelenting ascent of the first Munro, directly east from the path. Poor Meall a' Chrasgaidh - the Hump of the Crossing - is perhaps the least interesting of the Fannaichs, although it did at least prove to be an impressive viewpoint on a clear day. The ascent was quite a slog up pathless grassy slopes that just seemed to go on for ever; I was fairly knackered after the long walk the day before and I made slow work of it, requiring frequent stops to enjoy the stunning views northwest towards An Teallach. I actually climbed An Teallach last year in crap weather as part of a large group for some friends' Compleation Party; lovely to see this remarkable hill again in better weather! A bit higher up now, and an even better view of An Teallach Eventually - eventually - after about twenty false summits, Meall a' Chrasgaidh's summit cairn finally appeared on the horizon. Although this is an excessively flat and relatively lowly Munro, it does occupy a strategic spot in the midst of a number of higher and pointier mountains, and the views were impressive. The next target hill, Sgurr nan Clach Geala, was looking decidedly more distinguished directly to the south: Another lovely view of An Teallach, with its almost equally impressive neighbouring Corbett, which I've temporarily forgotten the name of - one of several Beinn Deargs in the area, possibly I headed south for a short distance to the Chrasgaidh / Sgurr nan Clach Geala bealach, then made a rising traverse towards the rather cute wee lochan that stands on SnC Geala's northern shoulder, with today's second target Munro now looking very shapely indeed in the background Before long, I was up at the shores of the wee loch, at a grassy area known as Am Biachdaich, "The Place of Fattening [of cattle]". Well, a lot of us have gained a few pounds during Lockdown I suppose, and I have to admit that I did stop here to munch on a pork pie before tackling the second Munro. The next section was an absolute delight. Sgurr nan Clach Geala's north ridge really is a Thing of Beauty and a Joy Forever. To my relief, although it looks rather intimidating from afar, it actually sports a good path that avoids any significant obstacles, and there isn't actually that much ascent that has to be tackled from the bealach up to the second Munro summit of the day. On the way up, there was a fine vertiginous view south down Coire Mor towards distant Loch Fannaich: At Sgurr nan Clach Geala's summit cairn and rump of a trig point now, and looking southwards towards yet another Thing of Beauty, the unfeasibly attractive sinuous ridge leading onwards towards Sgurr nan Each: Looking back northwards, it was obvious that Meall a' Chrasgaidh really does stand at a sort of Mountain Crossroads, as its name would suggest, and - for the fit and well motivated (probably not me, then) - it could be used as a fairly straightforward "bridge" to link this group to the four hills immediately to the east, that I'd done the day before. Sgurr Mor in particular - highest of the Fannaichs and a prominent landmark from miles around - was looking surprisingly close. Looking back to the rump of trig point, with poor lowly wee Chrasgaidh in the background on the left: Yet another grand view of An Teallach from SnC Geala's cairn, with Loch a' Bhraoin in the middle distance: Yours truly, sporting my Lockdown Eyebrows - I really must try to do something about them A better view of that beautifully sinuous ongoing ridge that leads towards Sgurr nan Each. I was pretty bushed by now I have to admit, but prospective Munro Number Two Hundred was definitely calling to me Thankfully it proved a relatively straightforward and very scenic stravaig (although longer than it looks) across to the third Munro summit of the day, which provided yet more fine views. Firstly looking eastward towards Meall Gorm and An Coilleachan: 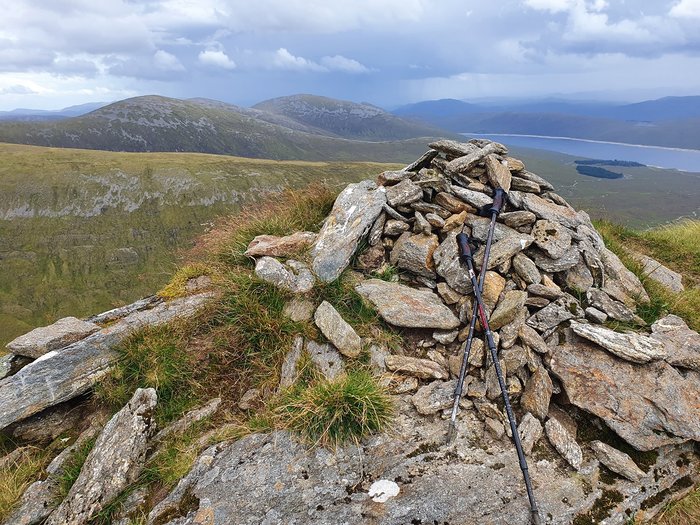 And a really lovely view to the south, to Sgurr nan Each's southern Top which is called Sgurr a' Cadha Dheirg, with Loch Fannaich sparkling in the background: The southern end of the extremely scenic Coire Mor and the eastern end of Loch Fannaich, with Meall Gorm and An Coilleachan in the distance again: 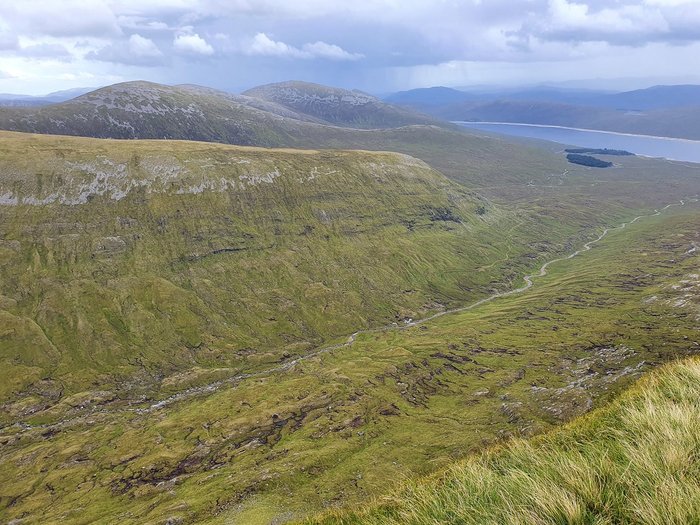 ...And, needless to say, another impressive view of the increasingly improbable-looking An Teallach: A somewhat intimidating prospect of Slioch and the Torridon giants to the southwest: all of them hills that I still have to tackle The Bobble-Hatted One at Munro Number Two Hundred, and looking a bit chuffed! Well, job done, but now I still had to get home and it was a long way back. Thankfully, although largely pathless, the descent proved straightforward enough, heading back northwards a short distance to the Sgurr nan Each / Sgurr nan Clach Geala bealach, then descending steadily from there towards the rather complex and much lower bealach with Sgurr Breac, that stands at the head of the glen of the Allt Breabag. It was a largely pathless descent from the Each / SnC Geala bealach, but still very scenic, with An Teallach continuously visible in the distance to provide inspiration: Down in the glen of the Alt Breabag, I soon picked up the good stalkers' path that heads back north towards Loch a' Bhraoin, and from here on it was a very straightforward walk back, although it was still a long way and I took my time a bit.
A final evening view of An Teallach from the car park Congratulations on passing 200. Sgurr nan Clach Geala is a fantastic mountain and one of my favourites.