I had wanted to have a ‘pop’ at Ben Alder for a long time now and with a reasonable looking weather window opening for the weekend, it seemed a good opportunity. There was a slight spanner in the works, however. I needed to be back in Dunfermline for a commitment in the evening. How about a run into Culra Bothy on the Friday evening, nail the mountain on the Saturday, then run back out? Seemed like a good idea and my mate Scott who was also in the area was keen to join me.

At 8pm we were heading up the A9 towards Dalwhinnie. The stars were bright in the sky and I was optimistic of some decent weather. By 10pm we were parked up near the level crossing and ready to set off. I had squeezed everything into my 25 litre mountain marathon pack and consequently, some luxuries like therm-a-rest’s had to be left behind. With head torches on we set off along the broad track that runs parallel to Loch Ericht. We were in no rush and just maintained a steady pace, ticking off the landmarks on the map; The Shieling, An Toichailt and Ben Alder Lodge. It was not really a surprise that we did not meet anyone and ninety minutes after setting off we were heading down the track that runs parallel with the Allt a’ Chaoil-reidhe. Just as I was beginning to think that we had missed the turn off for the bridge that crosses the river, a sign pointed us in the right direction and soon the black silhouette of the bothy loomed up in front of us. The first room we entered was empty and with the time fast approaching midnight, there was nothing else to do but get in our sleeping bags for the night.

I was awoken at 4am to the sound of rain hammering down and with the thoughts of traversing Ben Alder in the clag I kept my fingers crossed and dropped off back to sleep. Fortunately, luck was on our side and when I ventured outside at daybreak the tops were clear and it was "game on!” 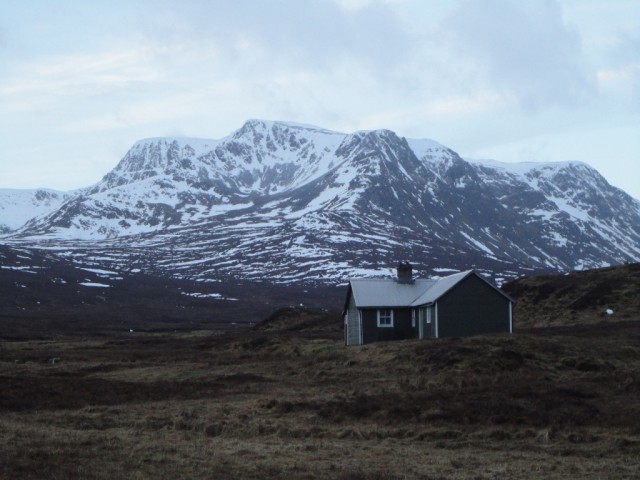 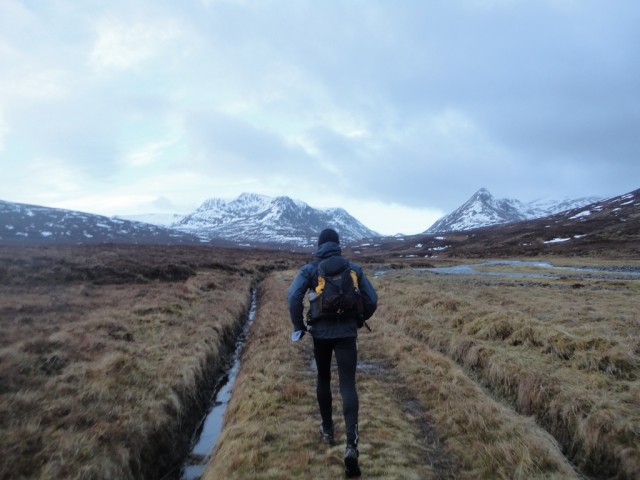 With a big day ahead, we quickly ate breakfast and set off. The plan was to head up onto the summit via the Long Leachas but as we approached the Allt a'Bhealaich Bheithe, we realised we were going to struggle to find a place to cross. The recent mild weather and subsequent thaw had turned the Allt into a raging torrent. We headed uphill looking for a suitable location and eventually found a place where the water was a little calmer. It would mean wet feet though but we were wearing fell running shoes so these would soon dry out. The water was freezing and I did not waste any time scrambling up the icy bank on the other side but Scott was not so lucky and had to stand in the water for 30 seconds or so whilst I clambered up. We had gained quite a bit of height whilst finding a place to cross and it seemed pointless dropping back down to climb the Long Leachas. Instead we decided to the shorter ridge instead. 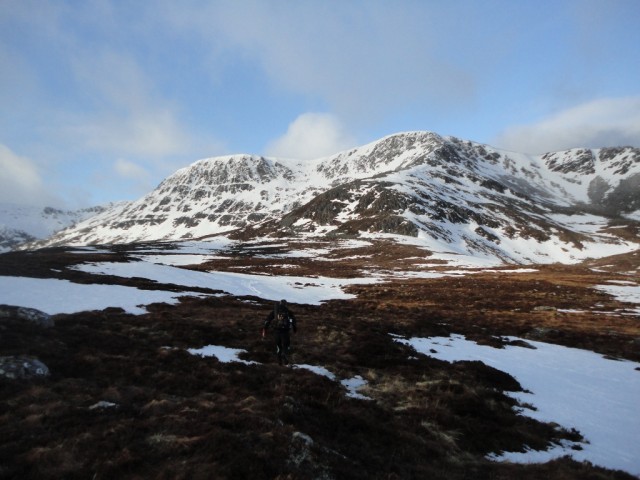 We ran over the tussocky ground and then started the climb up. Although there was plenty of exposure, the scrambling was not too difficult and the fine views that were opening up were amazing. 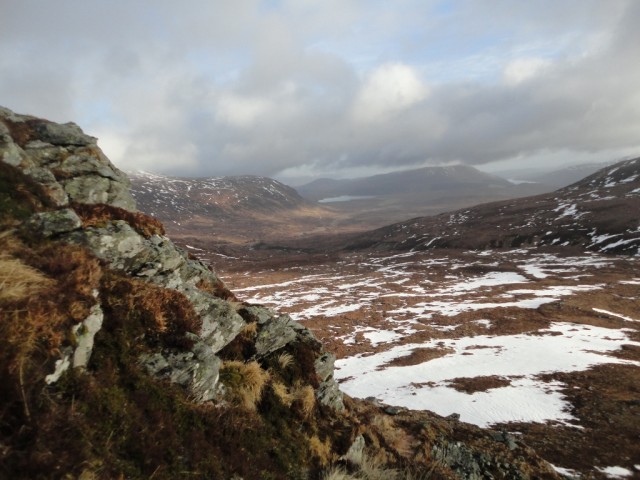 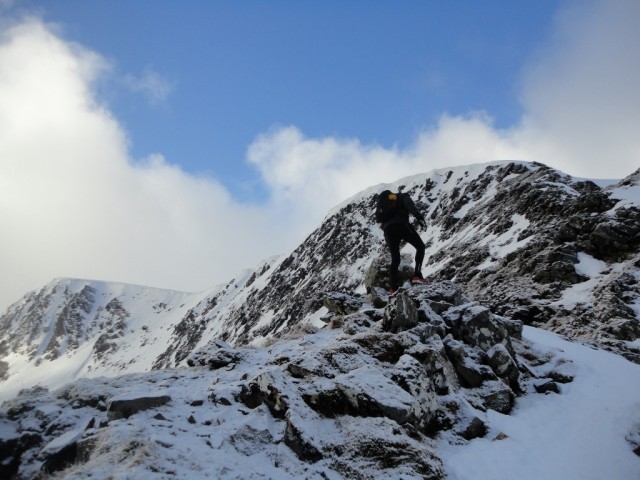 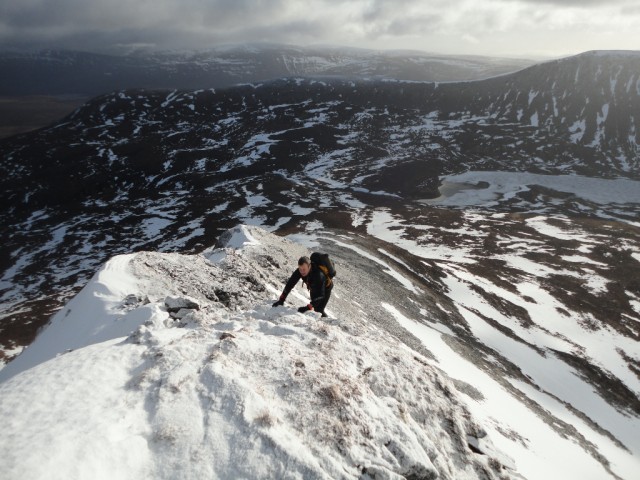 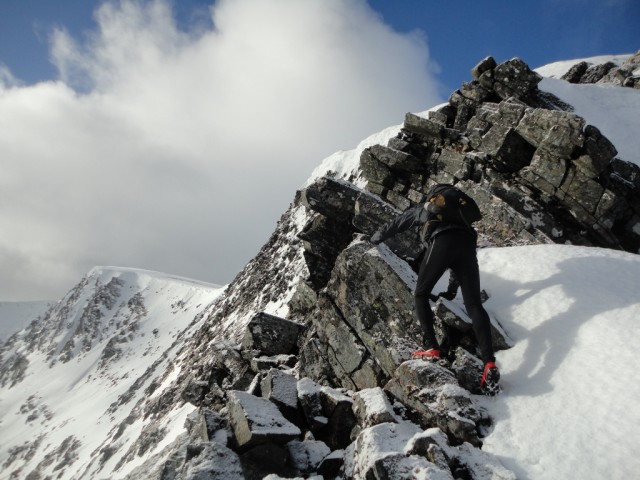 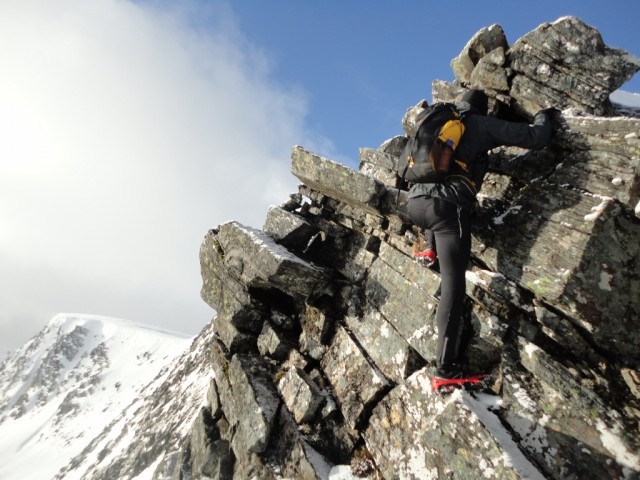 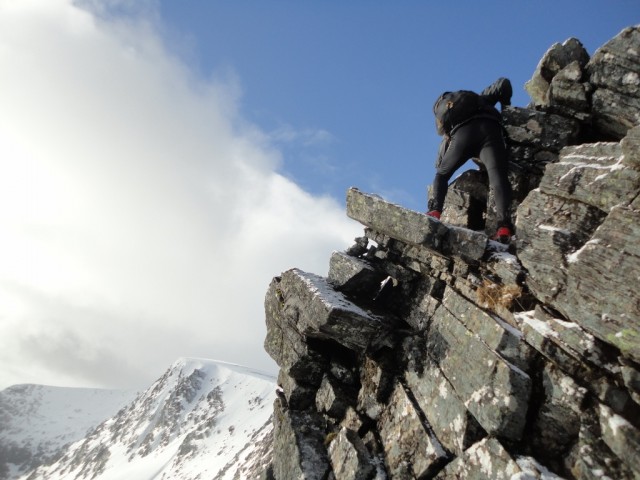 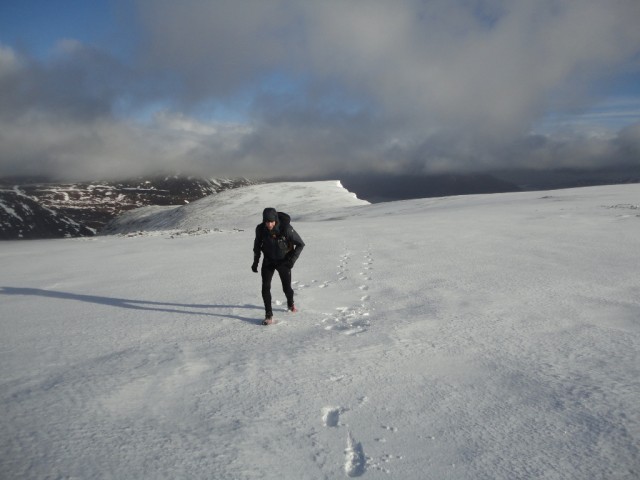 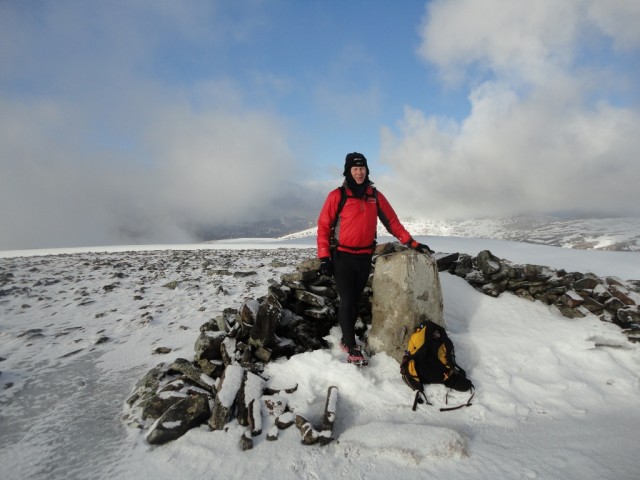 Once at the top of the ridge we were able to run again and soon we were on the summit top. With amazing air clarity and the clouds drifting in and out the views were nothing short of superb but with the wind picking up, we did not hang around and after a brief bite to eat on the top we headed on around the plateau edge and down to Bealach Breabag. 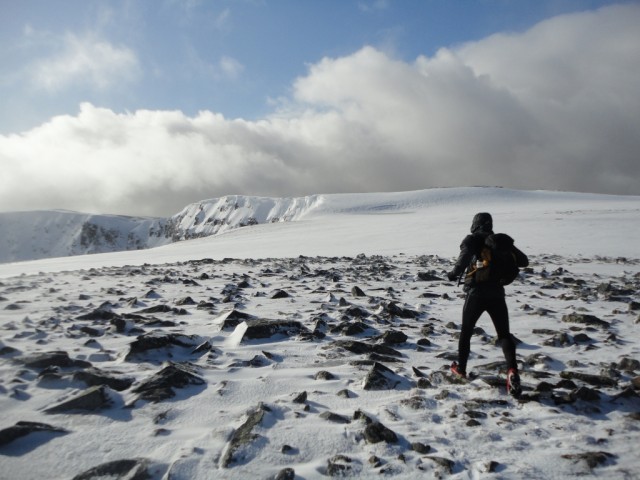 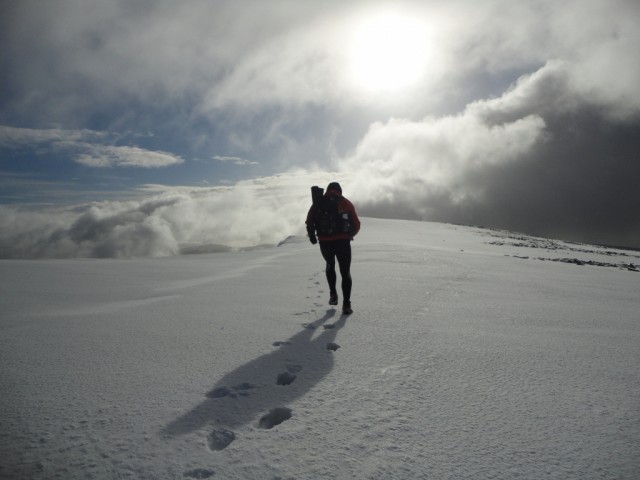 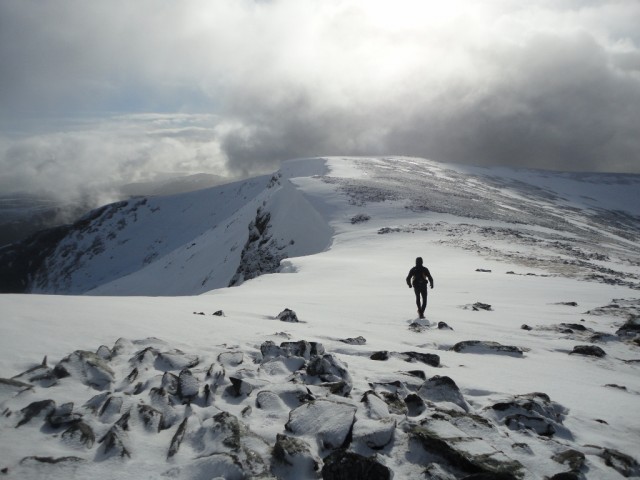 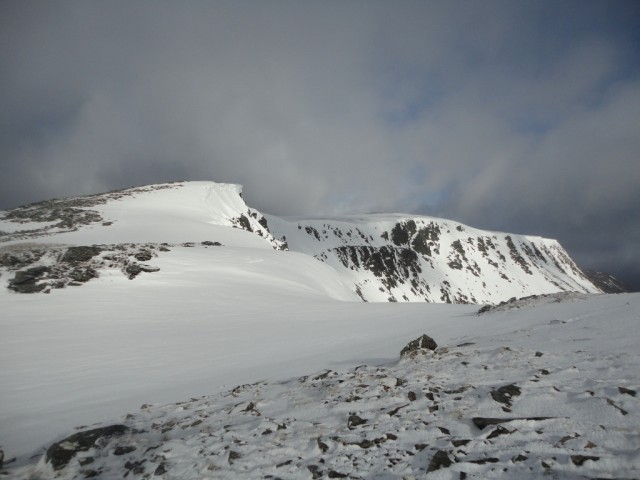 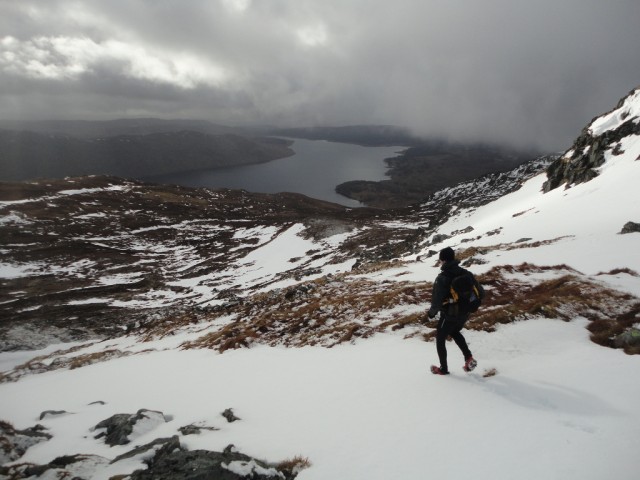 We headed up to the summit of the Munro Top, Sron Coire na h-Iolaire and then down and up to Beinn Bheoil. The views were equally impressive as was the running with the broad top affording quick progress. We dropped down off the top and humped across some rough terrain and picked the path back up. 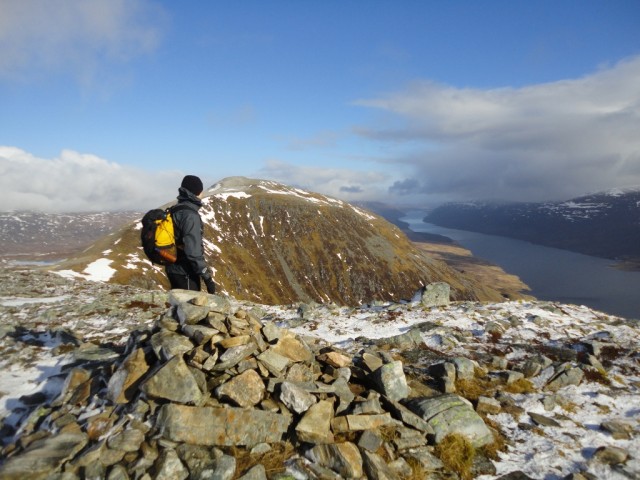 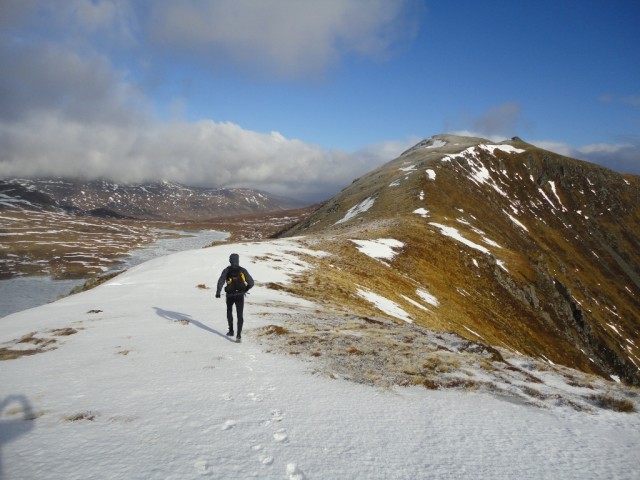 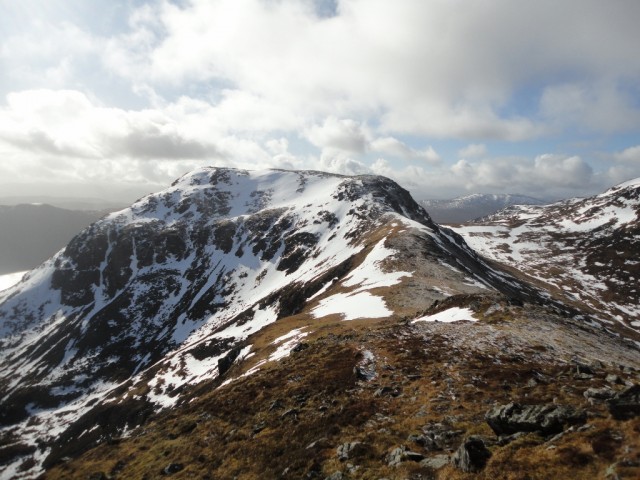 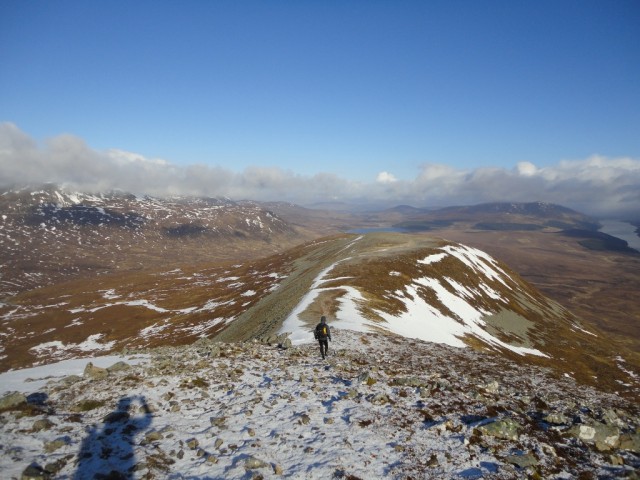 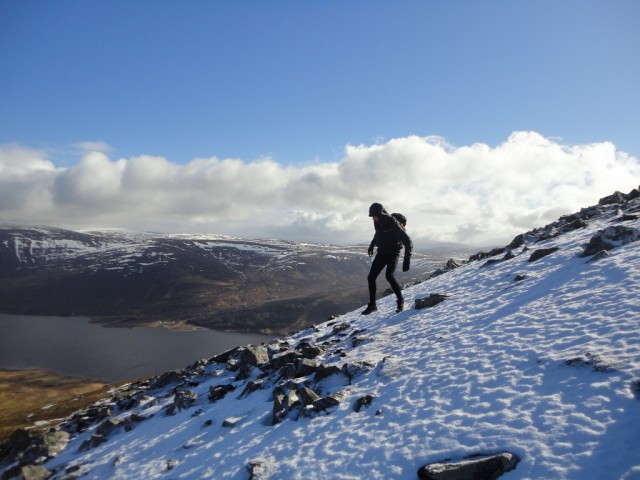 We had made good progress so far but there was still a decent amount of running remaining. I had initially suggested we head back out over The Fara but I just could not muster up the motivation or stamina to head up over another peak. Instead we plodded back along the track and got back to the car at 3pm, just in time to listen to the football on the radio back home. Phew

Route.gpx Open full screen  NB: Walkhighlands is not responsible for the accuracy of gpx files in users posts

Yer mad I say! Barking mad! Excellent stuff CW. I would expect no less of you!

BTW what was the loch-side track like? Would it be MTB'able?

BTW what was the loch-side track like? Would it be MTB'able?

Bloody nutters, and I thought I had a bit of the madness in me!

Impressive stuff it is, well done!

Have to join the chorus of 'yer as mad as hatters'! Awesome pictures, great report and much envy at your level of fitness

. However, this report is technically invalid as this is WALK not RUN Highlands

That's a pretty hardcore way to do it

Would love to have those views from Ben Alder - will need to go back again for another go. Probably not running though