Fifty shades of The Grey One

Fifty shades of The Grey One


When we climbed Beinn Dearg in September, an alternative approach to Liathach came to our attention. The north-west side of the Grey Mountain looked steep but not steep enough for a determined walker. We had done the classic traverse of both Munros on the ridge, but we never explored the western end of Liathach - and it was calling now!

The idea was to start from Alligin car park and find a way up Sgorr a'Chadail, the westernmost top of Liathach, from where a wide ridge leads to Mullach an Rathain. Return the same way:

Track_MULLACH AN RATHAIN 13.2KM.gpx Open full screen  NB: Walkhighlands is not responsible for the accuracy of gpx files in users posts
Here, I would like to thank Kathleen (Dogplodder) for her great report about the back door to Liathach, which was a big help for us when planning this route

We had expected this walk to be entertaining, but it exceeded our expectations when it comes to views. Now we know how much we missed doing just the middle part of the ridge. Plus this approach to Mullach avoids all scrambling/very steep slopes. The bottom half of the climb can be squelchy, but once on the ridge it is simply mountain p*** at its best. We had the advantage of a lovely, sunny, nearly windless day, a rare occurrence in late autumn.
The car park was busy, it was a sunny Saturday after all, but we were the only walkers tackling Liathach from this side, I bet every other soul went up Beinn Alligin (in September when climbing Beinn Dearg, we were also the only ones on this ridge). It seems the hill of diamonds steals all the attention, but we had done it several times and it doesn't really offer any alternative routes, so today it was the Grey One.
On the path along Abhain Coire Mhic Nobuil, Beinn Dearg ahead, Beinn Alligin to the left: 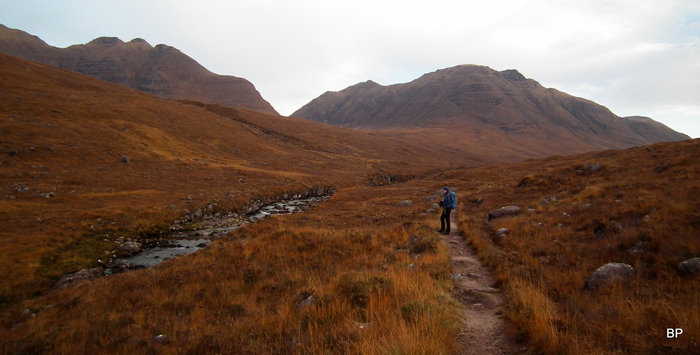 The Horns and a picturesque waterfall: Weather forecast was very good but the nature of this route meant we'd be in the shadow of Liathach for the first half of the climb. We reached the bridge over Abhain Coire Mhic Nobuil but instead of crossing, we continued on the southern side of the river for a short distance (there is a path if boggy) before heading straight for the northern slopes of Liathach. We picked what looked like the most friendly angle: It was wet in places but generally easy going. All rocky outcrops can be avoided. We kept to the left of a small stream. Views were restricted to just Alligin and Beinn Dearg at the beginning but even then it was worth a few stops for panoramas. The dark shadow of Liathach kind of cuts the photo in half:

Two tops of Baosbheinn peeking out from the gap:

A steady climb of 550m landed us on the western end of the ridge, near the top of Sgorr a'Chadail and it was a moment of bliss! As soon as we reached the more even ground, the full extent of the views was revealed. We were speechless for a few minutes. Then it was time for some crazy behaviour! This picture shows the remaining route to the summit of Mullach an Rathain. Easy, gentle slopes: Upper Loch Torridon with the outline of Beinn Damph and Bein Shieldag in the background: We emerged on the ridge only about 200m from the cairn marking the top of Sgorr a'Chadail, so we decided to take a short detour to see more views - and we were not disappointed! The south-western flanks of Liathach are nearly vertical all the way down to the village of Torridon and the loch below. We had good light for photos today and it was hard to believe we were blessed with such a glorious day to finish our autumn holidays on a high note! Sgorr a'Chadail is a tremendous viewpoint, but we still had over 2km to go before reaching the Munro summit. Not that we complained, walking with so many magnificent mountains around us! Zoom to the Horns of Alligin. A re-visit is due, but probably not this year: Another interesting zoom, this time to the Ugly Step on Beinn Eighe. From this perspective, it looks vertical and a no-go for a walker, but the appearance is misleading. It is actually a relatively easy if exposed scramble: Closer to the summit, the ground is more rocky but still easy going: Looking down to the ridge of Sgorr a'Chadail: The final walk to the top follows a well-worn path: Kevin lagging behind. Again, far too many photos taken in one day. Running out of space on my external drive The shoulder of Toll Ban, the usual descent route if doing the classic traverse of Liathach east to west. I hated it personally when we walked the traverse. Steep, eroded, slippery, wobbly... but at least views make up for all the pain. Today we would be spared from descending this way The southern Torridons: Maol Chean-dearg and An Ruadh-stac to the right, Beinn Liath Mhor and Sgorr Ruadh to the left:

Looking down into Glas Toll a'Bhotain from the path close to the summit: Mullach an Rathain was totally deserted which was a surprise - we expected at least a few walkers on such a wonderful day. We didn't mind being alone though, as we could spend as much time as we wanted snapping photos without tripping over somebody's dog or spoiling someone's view

Lucy celebrated her 130th Munro. She's aiming for for half way point now!

The more distant vistas were hazy but we immediately recognized the familiar shape of the Cuillin Ridge:

For wider panoramas we used Kevin's Fuji bridge camera. Hard to believe we still haven't converted to SLR, but we love the one we've got so much we refuse to replace it for as long as it works. Sadly, you can no longer buy anything similar, so the replacement will either be SLR or a good quality compact, depending which way Kevin wants to go. It's his hobby after all. I prefer to pose rather than take pictures He Who Always Knows It All Best and his precious camera: The main ridge of Liathach including Am Fasarinen and the summit of Spidean a' Choire Leith: Zoom to the pinnacles. We saw two walkers on the top of Spidean a' Choire Leith, but nobody on Am Fasarinen ridge:

Beinn Eighe. From this angle it looks rather uninspiring, with its best features hidden from view:

Lucy had a great day I didn't expect to be able to see the outline of Ben Nevis from Liathach, but this photo proved me wrong:

Beinn Dearg and the lower hills to the north: We spent quite a lot of time on the summit, including lunch break. Here are the advantages of starting early - we arrived on Mullach an Rathain at 12:15 so even on a short November day, we still had plenty of time to return to the glen before the sun died out.
Eventually, we started the descent. It is possible to go down via Coireag Dhearg by following a small stream, but we preferred to retrace our steps, more or less anyway. Returning via the western ridge meant keeping the views for much longer. Kevin spotted a pair of ptarmigan getting ready for winter:

We returned to Sgorr a'Chadail and carefully descended the steeper northern slopes, to reach Abhain Coire Mhic Nobuil just east of the bridge. The whole trip took us only 6.5 hours, and that included many long stops for photos and simply gazing at the views. This route could be even attempted in winter conditions. I can imagine posing on the summit of Mullach with snow everywhere and then posting it on social media with a comment "I DID LIATHACH IN WINTER CONDITIONS HA HA HA!"

Descending the eastern side of the stream: It was a superb day and a great way to finish the 2020 season. Kevin is going to work 6 days a week in late November and December so we will probably have no opportunity to do any serious hillwalking before Xmas. Shame, but at least we live in tier 1

A couple of pals and I did this very route in Sept. Your report captures our trip step for step.

Great write up - what a day you had for it! We did this route a few years ago as it was the only way I was ever going to get up Mullach an Rathain given my rubbish ability re exposure. I thought it was a beautiful route too and of course, Torridon views are unbeatable!!

That looked good. On my to-(re)-do list having seen next to zilch in the clag first time round - cheers

Thanks for the mention BP and glad the backdoor report was of some use. To be fair I've lost count of the number of times your reports have come in useful in our planning! One of the great things about this site.

Many thanks for all kind comments

I enjoy sharing my stories just as much as the trips themselves. I agree WH is a fantastic place to exchange info and look for new routes. I'm glad to be part of it

Despite Kevin's tight schedule we managed to sneak out to Fort Augustus yesterday to climb a local Corbett. Conditions were far from perfect (grey cloud all over) and I had to fight my old knee injury, but it was still better than sitting home.