It had been a long time since my last visit to the Highlands last October, but here I was again for another 2 weeks (almost) back in my second home.

After the long drive to Ardgartan, and I was hoping for better weather than the rain that descended as I walked the
1.5 hr trek along Loch Long to Mark Cottage Bothy. But at least the next day was a completely different story….the mist had cleared to leave wonderful clear blue skies and mirror still Lochs, such a shame I was not walking high that day. My walk out was a pleasure and the drive north to Glen Etive was a dream with many stops for some classic pictures under perfect photographic conditions. Unfortunately this was only a brief window of good weather in the first few days.
That night I camped at the head of Loch Etive, under a star filled sky on a frosty night, but warmed by a blazing camp fire. I had planned to meet my mate Keith and some of his friends by the Buachaille at 9am that morning. So the alarm was set for 7.20am, and when I popped my head out of the tent, I was disappointed to see that grey cloud had moved in during the night, we all know that feeling….Bugger!

When we all met, we could just see enough of the Buachaille to confirm there was not enough snow in the gully’s that we had planned to do on it, so we drove down the Glen to the car park for Coire nan lochan. Once at the car-park we hurridly donned gear in the cold wind, and re-packed rucksacks when I was horrified that I was given a coil of rope that looked long enough to climb the Matterhorn and some, a helmet that made me look like a Nazi storm-trouper, a harness that had very heavy bits and bobs hanging from it like Christmas decorations on speed, and 2 ice axes that I was tempted to use on the inconsiderate person who had now made my lovely light daysack into a something that weighed more than a pack I take on a 2 week trip!

So the five of us (Keith, Lawrence, Ray, Sean and I) set of up the corrie.
Keith, our main man, chose Boomerang Gully a good route for a virgin gully climber like myself that curves up the north face of Stob Coire nan Lochan. The weather was not kind, the cloud lowered and snow showers hit us somewhat horizontal as the day continued.
This snow gully lark was new to me, with ropes, slings, nuts and other paraphernalia that I was hardly familiar with, but I tied on at the end and just followed the others steeply into the cloud, being constantly amused by Ray who was ahead of me pulling up his harness, which was falling down more than a prostitutes knickers! 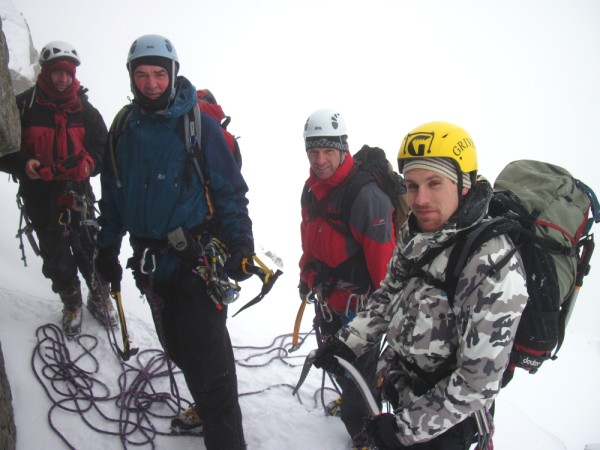 "I only said this rucksack was a bit heavy Keith!" The climb went without incident, and apart from the ropes, axes and crampons none of the other bits and pieces of “whatever” were used to aid our safety, so it turned out to be a walk in the park…if a very steep one!
Once on the summit, I for once became useful as I got out the map and compass to head us in the right direction down.
So that was my first taste of Snow gully climbing, and I wanted more and harder at that….tomorrow I would be rewarded with my request….

My short video of that climb is here:-

After another boozy night in the Clachaig....goes without saying, we all met again the next morning at 8.30am, well apart from Ray who I last saw falling into the Taxi! And after they dropped me at the Glencoe YH, apparently then fell back out again when they reached the Blackwater hostel in Kinlochleven, he was then carried to the bedroom where he decided he no longer wanted the (who knows how many) 6% pints of scrumpy that he had drunk, deciding it was best to get rid of it the way that it had been consumed…via his throat….the next day it was suffice to say he was left in his bed, in no fit state to walk downstairs never mind up mountains!

But we had reserves, John who lived locally, Carol (Keith’s wife) and Alan & Lillian had all arrived to swell the flanks. It’s a long steep walk up Coire nam Beith from loch Achnanbeithach, nearly all of us a bit groggy from the night before, and our guide and main man Keith started to stall, and soon had to turn back with a sick-note, a bug rather than the beer he reckoned?

Once at the head of the corrie Alan declared his ankle injury was playing up, so he and his wife Lillian decided to join John and Carol just for pictures a little higher up, whilst “THE REAL MOUNTAINEERS” (that includes me as well...haha

) set off for Summit gully. Now this was steep, steep, steep and utterly awesome for a bit of a newby like me in this type of thing. Super-sub leader Sean led the way, me in the middle and Lawrence behind. All was going well until we met a barrage of rocks that barred the way high up the snow gully, this time “paraphernalia” was used for safety, incase Sean came tobogganing down for a fast descent, but after struggling for about 15 minutes with increasing wobble legs, he decided it was beyond him, so we backtracked down about 150 meters to go up another, and probably the correct gully to the RHS, again at the top of this gully we had to climb over some difficult snow and ice covered rocks with desperate exposure behind, again “things” were used in case of a fall. After about 5 minutes of effort and scrambling Sean was up, me next….they were worried I might not be able to do it, not knowing my ability, but I made it ok, in fact enjoyed it in a perverse type of way, after all that was why I was there to experience that type of thing….with the security of ropes and “things.” Lawrence was next and soon up and over, from there the slopes eased somewhat and we enjoyed at last flashes of sun and views of the ridges and summit above, as we plodded up the brilliant white virgin crusty snow. We hit the summit at 3.10pm, just good timing as it turned out as a walker passed, who duly took a photo of us triumphant on the summit. (now at this point I was going to show the picture of the four of us, but Super-sub has not sent me the picture yet! I'll add it when it arrives

)
We amazingly got down in about 1 hr 15 mins, partly due to glissading several times down the snow filled corries…great fun!

More celebratory beer was consumed later, where we told a green (this time with envy) Ray of our adventures that day.
Awesome stuff!!! Great stuff, enjoyed the read and the pics, well done on your 1st gullies

Stunning pics and video, I need a lay down after reading that

. Glad to hear I'm not the only one with a tendency to over-consume after a day out on the hills

Another great report Alan, I'm just sorry to have missed the second day. A great weekend was had by all ( well nearly all.)

Thanks all, and especially to Keith who fixed it for me again.....Top man and canny Geordie.

Great report MS! I'd echo that it probably isn't for me

Always meant to do more of this sort of thing (in fact I don't think I've done any winter gullies) but never seem to get round to it, not to mention other more straightforward activities beckoning instead. I'll have a look at your video at home this evening.

Just realised i've missed out on 2 of my pictures from that report.... Great report and stunning photo's throughout, out of my league but spectacular just to read through