The Saddle via Forcan Ridge

The Saddle via Forcan Ridge


Having walked Bindean nam Bian etc yesterday and after messing around with breakfast at the Glen Nevis hostel and stopping for supplies we were obviously not going to achieve our next target, Liathach on the 31st, so on the drive up we opted for the Saddle in Kintail as a quicker back-up. Being late into Scottish hillwalking, and have climbed so few, there are plenty of tremendous alternative options still left to try. The Saddle turned out to be a good choice. The only qualm was that we arrived fairly late, around 11;00am
The layby on the A85 wasn’t full, so we parked and set off a few minutes after two seasoned hillwalkers and never got close to them again, we could see them way ahead overtaking a ‘slow coach’ in yellow. The good path rose the North side of Meallan Odhar up onto a bealach at 500m with Biod an Fhihich on the right; it was tempting to try this small peak but as the Forcan ridge came into view that idea receded. The path ran Southwards over MO and up to the foot of the ridge at about 700m. from the base most of the scrambling is out of view and the first few stretches seemed easy enough. We could see people ahead nimbly working their way up. Further up the ridge hogbacks a little and is narrow and exposed but not excessively so, the weather being dry and windy the rock was easy to grip. The first stretch of scrambling comes to an abrupt halt with a wall dropping down about 15m to a grassy bealach. Ben went over the top and started climbing down; I went over the top, took one look and retreated. There are two bypasses, one either side; I took the left (East), a mixture of rock and soil, I eased down over a steep slab with few holds and down, on a narrow path, around the wall. Ben was waiting for me. The next stretch of the ridge was almost a repeat of the first. Only one tricky point on the narrow arete where you have to swing over from a rocky slab sloping East to one facing West with exposed drops. At the end of the second stretch we came to the bealach directly below the East peak of the Saddle proper. We noticed the man in yellow, despite appearing slow was at the peak and moving off Westwards.

Looking back and forward from half way up. The difficult bit and The Saddle Walking along the narrow grassy arete and up the rocky rib, with some light scrambling we reached the Munro peak at 1010. At this point it dawned on us what a beautiful mountain this was. The main ridge extending at least another mile to subsidiary tops at Spidean Dhomuill Bhric and Sgurr Leac nan Each and beyond. A subsidiary ridge dropping Northwards in waves towards Sgurr na Creige and Loch Duich almost as striking. To the West we could pick out Beinn Sgritheall, The Cullins and the islands including Eigg and Rum. Walking along the high ridge we reached the second top and searched for a place to eat out of the wind. It turned out we found the same spot at the man in yellow, so we sat together and chatted. One of the delights of hillwalking is meeting people from all over who enjoy what you do, most people are happy to share their knowledge and experience; it the case of the man in yellow (incidentally he not only have a yellow fluorescent jacket but also a fluorescent fleece under it – apparently to help mountain rescue find him), the experience was vast, being a complete Completist (Munros, Corbetts & Grahams) having only started in 2003 and being 71 tomorrow he was on him second round. Alas he didn’t bring a cake, but talking to him cheered me up no end, still going strong at 71. He was somewhat amused at my intention of only doing the best Munros (and Corbetts and Grahams where possible) and assured me I would get the Completist bug. Whilst talking I noticed Beinn Sgritheall over the way and made a note to add it to the list; by the end of the week we have ticked two walks off and added two.


The Saddle looking South, The Trig point, Beinn Sgritheall from the Saddle and Rum & Eigg looking over the Southwest ridge After lunch our new friend headed off to Munro No 2, Sgurr na Sgine and we headed to the car, regretting we had made such a slow start to the day, I would have loved to have complete this ridge. If Ben ever wants to complete his set, he is going to curse us leaving all these ‘unburied bodies’, still he could pick off Sgurr na Sgine and the Munro tops in a day.
Off to Torridon for day three.

Wonderful Hill in a wonderful country

Biod an Fhihich from Meallan Odhar. This looks like a better approach for a full circuit of The Saddle, including tops. 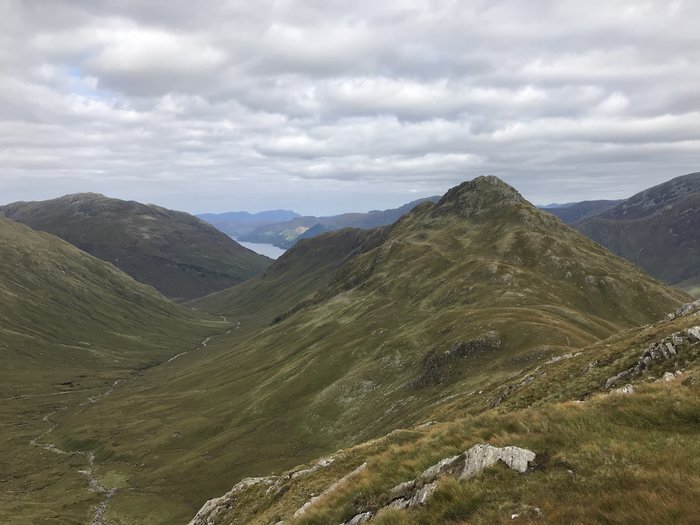 Re: The Saddle via Forcan Ridge

Some cracking pics there