This horseshoe route was very enjoyable even when the weather chucked most stuff at us, we did manage to get great views in between the snow/hail flurries and wee bit of scrambling. We started just before the Cruachan Power Station on the A85, at the "Falls of Cruachan" train station stop. There was plenty of space on the side of the road to park. the start of the route is sign-posted from the road. Head towards the train station and walk through the tunnel, under the tracks. The track leads up a small wooded area for about 1/2 hour. 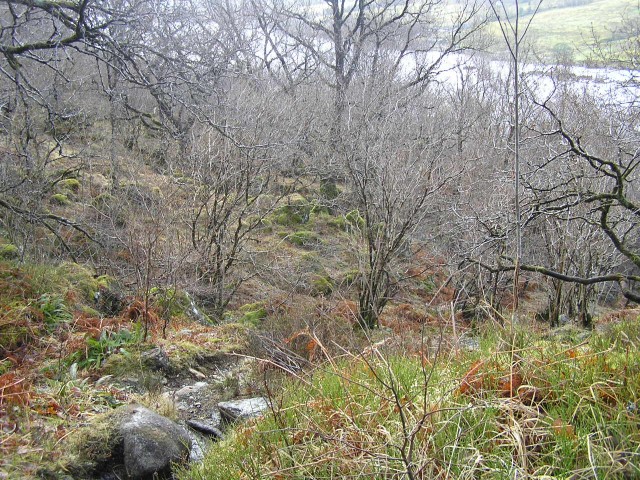 Beginning of walk through wood

you'll see good views of Loch Awe (hopefully) as you climb steadily up. 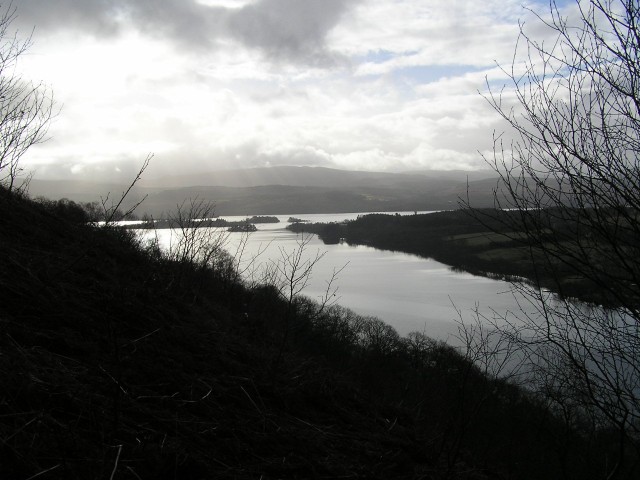 After 1/2 hour the track comes to a stile. Cross over, and the wooded section can be left behind. The track continues climbing, following the river. 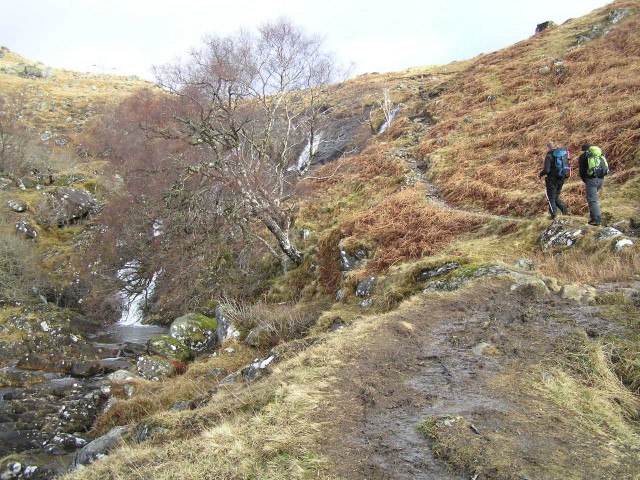 We saw a makeshift bridge with some iron girders, presumably if you wanted to go up Meall Cuanail you would cross this? 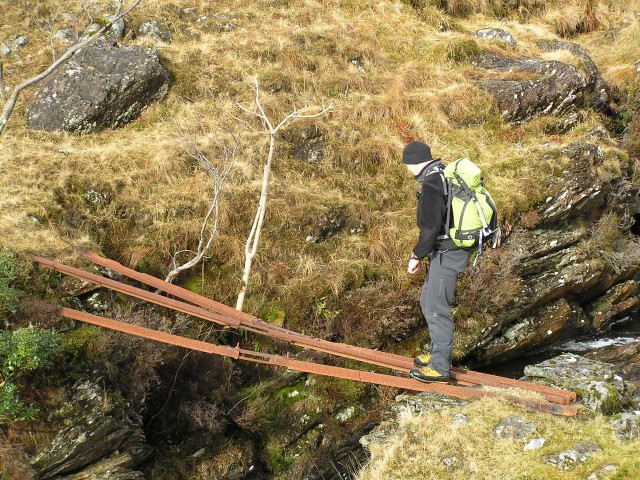 It looked like it would take our weight, but this wasnt our route today, to we left it for another day and continued up the track.
After about 45 mins, we reached the reservoir. 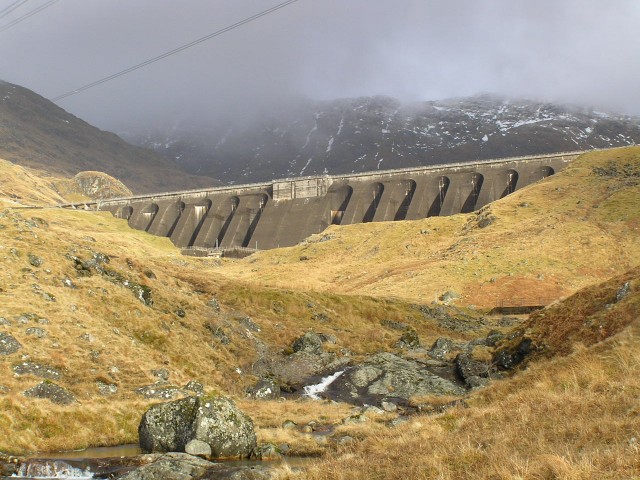 Cross over the stream and head to its western end, where a ladder takes you up to the top. 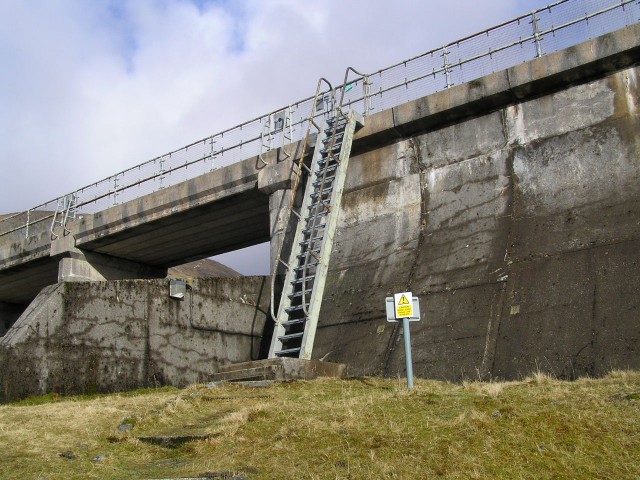 From here follow the track around the western edge of the reservoir till it gets to its most northern point. this is also marked with a small windmill/solar panel. 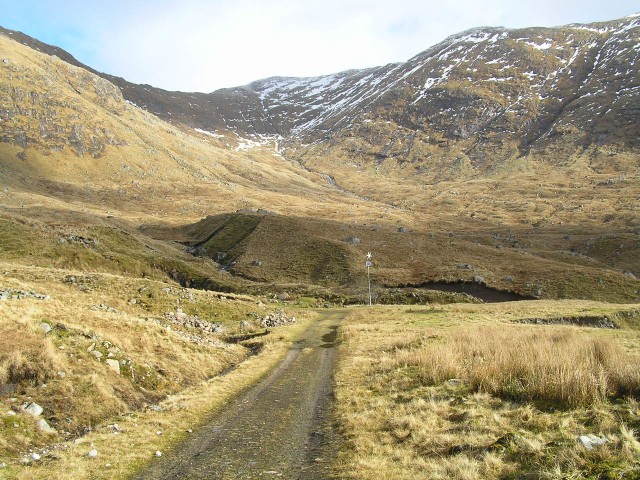 From here a path climbs NW towards Bealach an Lochain, following a stream. Track up to Bealach

We started hitting the snow line around 800m just below the Bealach. We reached teh Bealach after about 1.5 hrs. At this point the steep path up to Ben Cruachan is obvious, and quite stoney. Climbing from Bealach an Lochain At around 920m, the path becomes less stoney and there a chance to 'play' a about on the stone bridge. Stone bridge (with quite a drop underneath)

After this section, the route becomes more bouldery the further you go up. Eventually we reached the top 2.5hrs after starting off. At this point it was snowing and cold, so we quickly recharged with some sandwiches, and set off down the ridge. We got climpses of our intended route every now and then. Just under the summit, we were faced with a tricky scrambly bit. What made it tricky was the ice and snow on the rocks, and we hadnt put our crampons on, so care was needed. Looking back at scrambly section

Along the ridge line we occassionally got views to the hills to the west. Views to the west Again, we could see the route occassionally, and how impressive the horseshoe was. An important point to note after having descended the ridge from cruachan in bad visibility (like us), is to watch out for the cairn on the ridge. This cairn marks the point where the ridge continues down east, and not to follow the route north to Drochaid Ghlas. you would naturally want to follow the ridge up, but instead head down eastwards from this point (unless you want to head into another glen Again the cloud lifted, and we got views of the reservoir and our route. This final section becomes easier. follow the ridge round climbing Stob Diamh, and onto Stob Garbh. from Stob garbh you can easily descend down to the reservoir from a SW direction, and follow the route back to throught the wood to finish off. We managed to get back just as the sun was setting for a most enjoyable day and a well deserved pint!

Exciting, a wee bit nerve jangly and beautiful. Looks like your pint was very richly deserved!

good point about drochaid ghlas....I think I'd started out to climb it after mistaking my bearings in the mist before realising and turning back

Thanks for sharing, lots of great hints I'll keep in mind for when I hopefully visit later this year.

A fine report and a mountain I must get to next time, high on my list. I like the detailed photos of your route and the terrain.

Seems like you like to try out bridges - the girders are one thing but that stone bridge, are you sure?! Looks like it's finely balanced and ready to go at any minute!

Glad you got some views!

I enjoyed this walk when I done it but I don't think I've ever experienced such a cold wind like the one on the Bealach on Ben Cruachan... Its making me cold just thinking about it... bbbbbbbrrrrrrrrrrrr

I must say, we didnt hang about on top for very long, as it was a bit of a whiteout. Just enough to get some food in, and start the decent down the ridge. the weather was very strange that day. It covered all weather in one day! Oh and that wasnt me on the bridge (I was taking the photo). I did think he was off at one point, as he slipped on the grass approaching the bridge....one slip and its a longgg way down. I had more sense

yeah, pretty much. Its on the right just before you reach the bealach to start climbing cruachan, from memory.Just walk over to the right as you are climbing up and you should find it.

thebaldfalcon wrote:was that stone bridge on one of your photos easy to find

see if this report helps you find it http://www.everytrail.com/view_trip.php?trip_id=670547

he looks like i felt in his picture, you think you can stand up for a good shot , but your legs turn to jelly