Hewitts included on this walk: Dow Crag, Grey Friar, Swirl How, The Old Man of Coniston


Hello everyone, as promised we set off on Friday evening for The Birks, a school hostel nestling in the lovely Duddon Valley at the foot of Harter Fell, arriving around 8pm. Our aim, on Saturday morning, was to walk from our digs over the road and break trail up to Grey Friar, we knew the weather was going to be bad but initially it wasn't too bad. Twelve of us gathered outside to set off, including Chilli our chef and Harold, plus new boy Billy, it was to be his first walk, a ten miler and six Wainwrights The gang ready to go

I thought Billy deserved a close up, after all he is only 8 months old As we set off up towards Grey Friar we could look back at Harter Fell which towered above our lodgings. The weather was much worse as we reached the top of Grey Friar at 770 metres. As we left the summit Commander Conroy was keeping his eye out for the plane wreckage of the Canadian RAF bomber. As the weather was drawing in we could see perhaps the problems pilots might have. 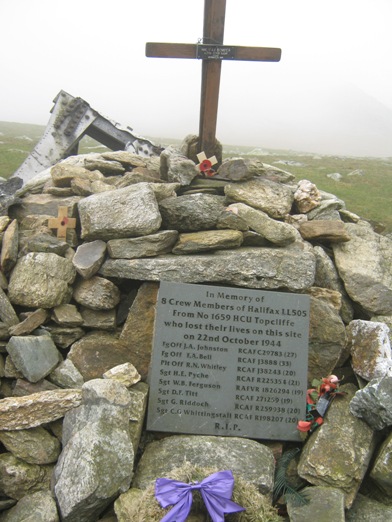 Now it was time to move on towards our next peak of Great Carrs at 780 metres and Billy was doing ok but was beginning to feel the cold, do Paramo do dog jackets Next it was on to Swirl How at 802 metres, the peak was aptly named as the wind was viciously swirling with sleet and snow in it. We now passed the Birkett of Great How at 770 metres on our way to Brim Fell at 796 metres, rattling up the tops now. A look down towards the valley and Lisa Now we made our way towards the old man, Billy was finding it hard to keep his feet in the wind, then we were on Coniston Old Man at 803 metres. The weather was so bad now that the camera had to stay in the case for its own safety, we moved on to Dow Crag at 778 metres and our 6th Wainwright, now it was all downbank as we passed the Birketts of Buck Pike, Brown Pike and Walna Scar before dropping down into Seathwaite and the pub where we were meeting our transport. It was 10 miles in ever worsening conditions and Billy had made it, with the help of the odd helping hand, his first fell walk. The next picture says it all, never again, just the sight of walking boots and poles will terrify him Finally a view from the Birks View from The Birks

A tough walk with some testing weather, particularly the high winds, as for next week, who knows, take care all

Hi Sue – I like the report and especially the pictures showing the weather closing in.

You can clearly see your weather deteriorating as your trip went on, especially the picture of Swirl How with sleet and snow! As you say, the weather was testing but as always it looks as though you thoroughly enjoyed the walk non the less.

Yes, its always fun to get out on the hills, hope the picture of the plaque gives you the information you wanted

Hi Sue – it certainly did, very helpful. I hope to get into that area of the Lakes some time this year, I tend to head for the central and Northern fells. Someone posted a ‘Goals for 2009’ on the general discussion board. I replied by stating that I wanted to get a few more Wainwrights ticked off. I don’t live too far from the lakes so need to get myself some fell’s bagged this year, our little boy also loves his carrier now which should make it easier to get a few hills in - although I'm not sure he would have appreceated the weather you've just been through

It can be difficult balancing work with a young family – I’m not sure which is more demanding, our little boy of 22 months or work

Last year we went backpacking for the first time sine my scouting days and it was great.

This year, well in 2 weeks to be exact, my wife has decided to come as well as the kids.

We'll be staying at Turner Hall Farm, near Seathwaite and hope to tackle Conniston Old Man

Have you any suitable tips ?

I am sure there are better qualified people than me to give advice, we descended to Seathwaite but it wouldn't be to hard work to climb to Walna Scar where you can then go via the Dow Crag tops or drop down and go via Goat's Water and onto Goat's Hawse, the Dow Crag way means a drop down before rising to the Old Man. When my husband and I did it we parked at the Coniston end of Walna Scar and climbed straight up the Breast, the direct route. There are lots of choices depending on capabilities and the distance you want to walk, you could leave the summit and come down through the mine workings,they are worth seeing. Don't forget a drink at the Newfields Inn at Seathwaite