After having done Beinn Bharrain, my Saturday objective was a route up Glen Rosa over Beinn Tarsuinn, the A'Chir ridge and Cir Mhor. The mountain porn had been examined weeks in advance and my other half had been getting worried that I was actually spending more time with my head in maps and the Corbetts book, than with her. Yes, it was possible. The route described called for 'rock-climbing' skills and preferably with a rope and partner. I had neither but was prepared to bail out if things got too precarious. I felt quite comfortable that I'd be able to circumvent any problems. Before the A'Chir ridge however, the pleasant amble along and into Glen Rosa, with the early morning light was lovely. As is often the case with Arran (me being a veteran after 24 hours), the clag was down and the majestic tops couldn't be seen. There was a hint of something sharp and craggy in between snippets of cloud and it only heightened my anticipation - my loins were on fire! I reached the burn, which cascaded down from Beinn Nuis. However, it had always been my intention to go over Beinn a Chliabhain rather than Beinn Nuis. Which I instantly regretted once I was on BaC as Beinn Nuis to Beinn Tarsuinn looked fantastic. Instead, the route I chose was a nice little intro to what was lying ahead and what it did offer was a tremendous view over Goatfell and the A'Chir ridge. Beinn Tarsuinn was covered in clag and I worried that this would be the same the whole way along. My descent off Beinn Tarsuinn was 'interesting' - I came down through some crags, which exercised the old tricep muscles...ahem. Anyway, I began the walk/scramble along the ridge and it was good fun. Until it started snowing. Until it got quite, eh, hard. I stopped in a wee 'cave', took stock and decided to go on any further would be utterly daft - this seemed a good point to get out while I could and so I descended a funnel of rock back to the walkers path. Suitably chastened, I headed on to the col after the ridge and looked up to my 2nd objective, Cir Mhor. A bastion of rock jutted out into the Glen and as I climbed higher, I had great views over to Caisteal Abhail, its magnificent corrie and over to Goatfell, which looked a different beast from this angle. I got the impression that at the top of Cir Mhor, it was straight down on many sides and it felt very exposed. It was all mine though and I was stunned that on a Saturday, I was the only one around. My descent down into Glen Rosa took time but it was a lovely area. Eyes cast back to the Witch's step and I knew I'd be back to Arran for more of this. I can't wait. Heading on to Beinn a Chliabhain Looking back towards Brodick and Glen Rosa head 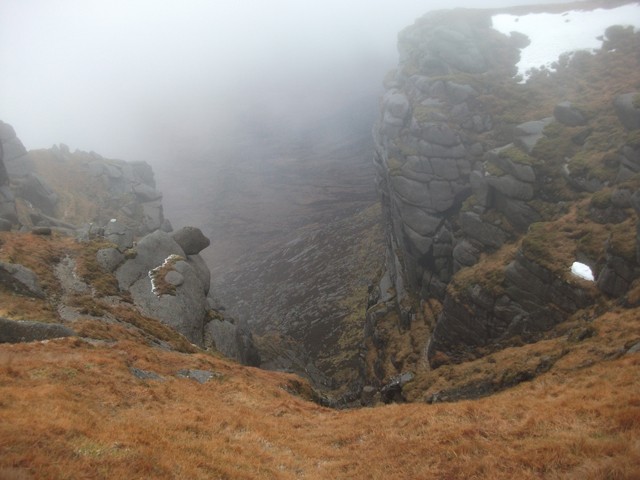 Top of Tarsuinn - no place to slip Good place to stop on A'Chir and re-think Looking back to A'Chir - I'll get you next time! 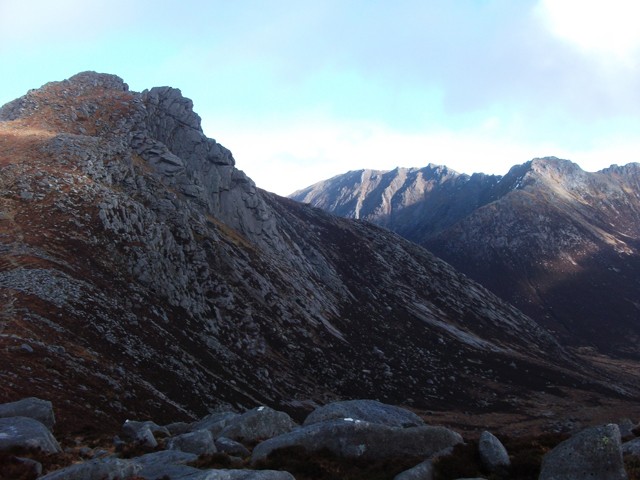 Cir Mhor with Goatfell in the distance Caisteal Abhail in the distance I love the contrasts of this shot Goatfell in all its glory

What a fantastic looking place, I would love some time on Arran to explore.

Terrific report. Hope to get back to Arran sometime - great hills!

Looking forward to Arran this Summer. Your report certainly whets the appetite

Certainly looks a superb place to be. As well as those on WH I've read a few very enjoyable accounts of visits from the old school of WH Murray and others, they were all highly complementary about what was on offer and not just the rock climbing.

I can see why you want to go back, as you say a partner and rope would be good, and good weather as well to see what you're getting into!

Sorry Graeme. But I deliberately left Caisteal Abhail and Goatfell for a return - hope you'll join me!

Superb report Kev.... far too many years since I was last on Arran

did you like my video? I thought it justified my decision to get the hill off of A'Chir.
Can't wait to head back and tackle Abhail, the Witch's step and perhaps the N ridge of Goat Fell.

Oops, missed your video the first time I read. I wouldn't need any excuse to avoid A Chir anyway

Great photos and a timely reminder for me to go and spend some more time over on Arran, and do some proper walks/scrambles.

great report and pics, brings back memories of school days (the last time I was on Arran)

kevsbald wrote:Sorry Graeme. But I deliberately left Caisteal Abhail and Goatfell for a return - hope you'll join me!

As long as you're no talking about this month!

Aw magic!! How nice to see a report from the home turf!

That bloody A'Chir... my white elephant that one... been up everything here hunners but not that bugger. Easy enough to get to the top, but it ain't about tops with her, it's about traverses. Aim to do it this spring with a superhero type friend... Cackitty Breeckity

The Glen Sannox horseshoe is a peach of a day, one side of the Witch's Step is a roper (unless you have balls of steel or the bravado of youth, or both

)
Cheers!
YAY!! Everyone come to Arran!!

Nice - not set foot on Arran yet - it looks great