If you have read our previous walk reports, you’ll be starting to realise that lateness is something we excel at. This report being 4.5 months in the making is a good example of this. And, true to form, on this day in question, we set off late heading for the Dalmally area with our good friend Pickle along with his wee pooch, Clyde.

We arrived at the start point to discover there were no other cars which was surprising given the weather forecast and proximity to the central belt. Another constant to accompany the timekeeping is that, on arrival, it always takes me so long in getting the hiking boots on and stuffing last minute items into bags. How is it possible for me to be so late getting ready to leave, to never be ready at the start point?! While faffing around, Pickle nearly lost his bowel contents as Clyde almost took a run and jump off the bridge that leads over a tumbling river just beyond the lay-by we had parked in. With Clyde leashed up and the boots now on, we finally began the walk at 10.45 by heading through the gate that takes you through the local farm on a good track. After passing through some fields, we reached another gate and continued on the track, climbing steadily. The path passed a waterfall before swinging right away from the main track where we scoped out a good point to start following the steep nose uphill. The path is indistinct, boggy, soggy mud and grass with water pouring out the ground with every step. None of us really seemed to be overly optimistic about this section of uphill. While the western Highlands are full of rugged character and enjoyable ridge walks that stir the soul, they certainly tend to lack in dry paths to reach said ridges, thanks to the persistent amount of rainfall that is carried in from the Atlantic. If you forget about the wet underfoot (and wet inner-boot) then another positive is that thanks to the steep slope angles in the west, you are guaranteed to gain height at quite some speed. Gain height quickly, and absolutely sweat your pan in. As the height was gained, we soon enough reached a much more pleasant rocky path at around 800m. 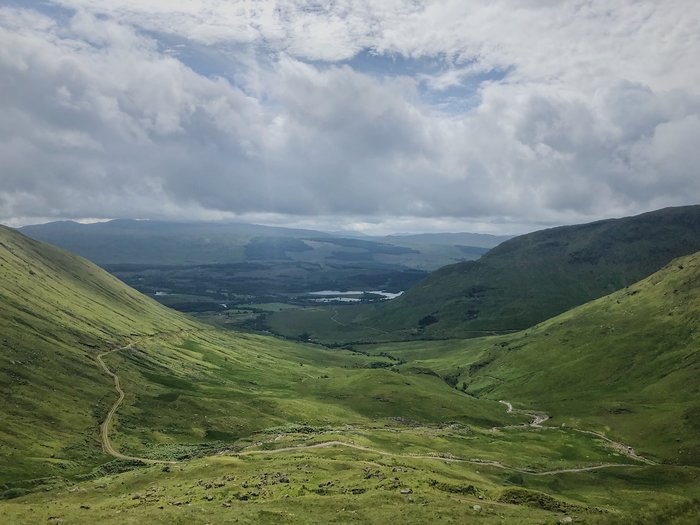 We emerged onto the main grassy ridge at 890m with just shy of a kilometre to reach Beinn a’Chochuill’s summit point. The ridge is an enjoyable walk and gained the remaining height gradually, arriving at the cairn which was a perfect lunch spot with views across Glen Kinglas to Beinn nan Aighenan and the Etive Munros. For anybody that knows me, I have quite an overwhelming fear of heights with a habit of worrying more than necessary after reading some walk reports. The walk report for Beinn Eunaich had mentioned very steep ground on the descent from the last Munro and no matter how much I tried not to think about this, it was at the forefront of my mind. When this type of anxiety and fear comes along for me, it can be absolutely draining and takes some of the enjoyment out of the day as it gives me an uneasy feeling of dread in my stomach that I feel I have no control over. Anyway, trying to live in the moment and put the worry to the back of my head, I enjoyed lunch and soon enough we headed along the ridge to the bealach Lairig Ianachan. The going was good except for a couple of large puddles and inevitable frog dodging as they seemed to leap out from nowhere, landing exactly where you’re about to place your feet. The final ascent of the day could be seen ahead which looked fairly steep from the bealach. Despite its steepness, it was an excellent rocky path and I actually found it an exceptionally enjoyable walk uphill. In what felt like no time at all, we’d reached the top where steep craggy sides fall away into Coire na Garbhlaich from the summit cairn. We had some more food and a longer stop again as 4 impressive fell runners appeared on the summit after tackling the steepest section of the hill.

Suitably fed and rested, we decided that it was time to start the walk out and began the easy descent, passing a man and his dog who were on the way up. The broad ridge was quite soggy which meant a couple of slips. After a wee bit of time, we reached the cairn that marks the steep descent off the hills - the section I’d been worrying about. As usual, I wished that I hadn’t spent as much of the day worried as I did, as it didn’t seem excessively steep at all to me and was on an excellent path despite being badly eroded in a couple of places. Pickle clearly being the brains of the group, decided to sit on his backside while Clyde was on leash bounding down the hill, pulling Pickle behind him. It was absolutely hilarious, while evidently very effective as he was making some incredible speed on those downhills with us trailing behind him. After some loose sections and a couple of falls (we should do a Go-Pro ‘outtakes’ video come to think about it) we arrived back at the good track that leads you down to the farm which made for some fast going. Inclusive of long lunch stops, the entire walk only took us around 6 hours and 15 minutes which was ideal for a quick trip just outside of Glasgow. Safe to say, Clyde slept the entire way home.