Carn a'Chuilinn: back on hydro track

Carn a'Chuilinn: back on hydro track


After six days of non-stop work, Kevin said he needed a few hours "up on high ground" to recharge his mental batteries. Late November and December are the busiest months for delivery drivers, especially now in COVID times, when everybody orders everything online. No wonder Kevin was fed up with cardboard boxes and wanted to "go out of the box" and up on the hills!

A couple of small issues restricted our walk to an easy Corbett. First, weather looked cloudy and pretty miserable. Second, my old knee injury came back (I must have overstretched it on Liathach) and I didn't want to risk a long excursion. Days are so short now that if you are too slow, you might run out of daylight easily. All that put together, we picked a Corbett we had already done before, and one close to home so we didn't need to get up at ridiculous hour in the middle of the night.

Carn a'Chuilin is often overlooked and neglected by hill-goers, because (as I once heard someone say) "it is nothing special: no special views, rocky features, glens, corries or waterfalls". I'd add, nothing interesting from the wreck hunter's point of view either. The approach starts near Fort Augustus and for most of the ascent, the route follows a hydro track the size of jet runway. This Corbett is best saved for winter conditions. Our first visit was indeed in early January on a proper winter day (old reportHERE). Today, we had no hopes for any snow, even on higher ground.

Track_CARN A CHUILINN 18.6KM.gpx Open full screen  NB: Walkhighlands is not responsible for the accuracy of gpx files in users posts
Since our previous visit in 2014, a new path has been constructed (part of the South Loch Ness Trail) which avoids walking along the road. We didn't realize it and followed our old route map along B862 to the entrance gate to Glen Doe hydro electric works. On the way back we used the path as the updated WH route suggests.
When we left the layby, thick mist obscured all views but as soon as we started gaining height on the hydro track, we walked out of the clag. At least we had seen some views 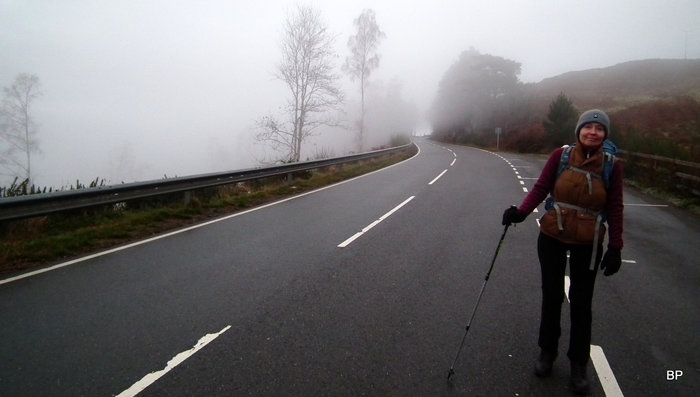 Mist in the Great Glen from higher up:

We walked past a small damned lochan (seen here looking back down the track):

Not much to say about the initial stage, just marching up the track. We were overtaken by a van going up to the Glendoe Reservoir and by a bloke on a quad bike. Almost like driving up the A9

Beinn a'Bhacaidh, a little, intriguing Sub'2000 Marylin we haven't visited yet - we keep it for a snowy day

It is possible to follow the hydro track up into Coire Doe to the height of 600m, but we decided to do the route anticlockwise and left the track at 380m, just before it crossed a bridge over the Allt Doe. A faint path follows the stream. I remembered from our previous visit, this stretch was very boggy, but surprisingly, it wasn't as bad as we feared. No snorkel and fins needed this time

Turn off the track here:

The path is sketchy and the ground around the stream was saturated... 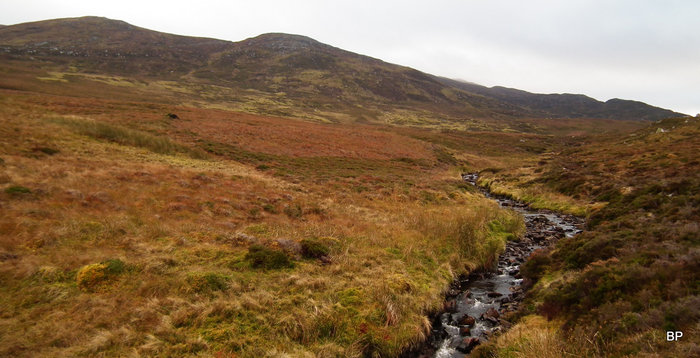 ...but as soon as we left it and headed across the moors towards the steeper section, walking conditions improved. sadly at the same time, my knee started hurting. It wasn't painful enough to stop me from continuing up the hill, just an annoying, dull ache which accompanied me for the rest of the day 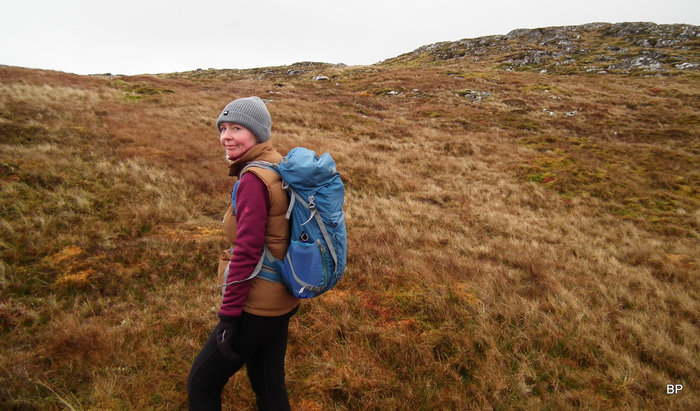 The climb was quite boring, just a wet, grassy slope. Views were restricted, too, with heavy cloud lingering low and covering the higher tops to the south and west:

We gained the ridge about 400m from the summit. The cloud was well above the top of Carn a'Chuilinn and we could see well beyond the lochs just south of the summit ridge:

Strange effect of mountain-shaped high cloud on the eastern horizon: 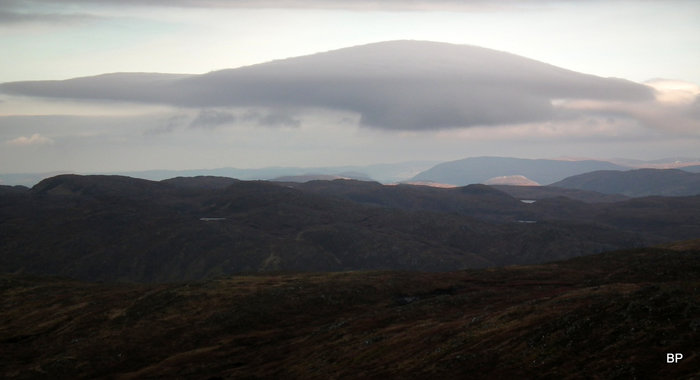 Looking back the way we came:

The summit of Carn a'Chuilinn is topped with a large cairn, visible from the distance:

View north from the summit:

We sat by the cairn for a quick snack and cuppa. It wasn't as cold as we expected and the cairn gave us good protection from the wind. Another walker came up and we exchanged a few pleasantries, he said he was 9 Corbetts away from compleating. Wish we were so close to the final hurdle! In 2020, we ticked off only two new Corbetts. Hopefully, the coming 2021 will be better...
Kevin had some ideas about exploring new tracks to the west and north of the summit (it is possible to make a larger circular walk here) but my knee has gone stiff and I wasn't keen on his suggestions. So in the end, we followed the usual route east to pick the track in Glen Doe.
One of the lochs below the summit:

Limping Panther on the ridge:

The descent route into Glen Doe follows the Allt Coire an t-Seilich: 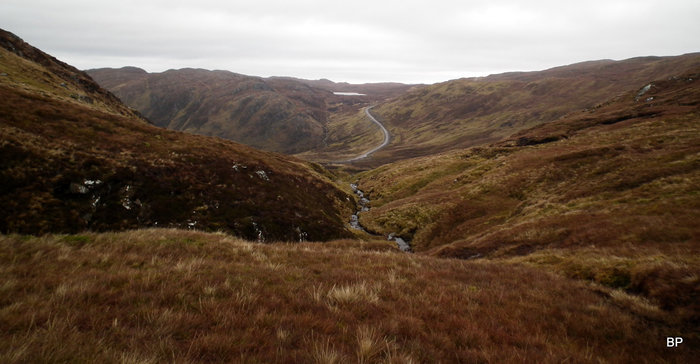 We picked an old stalkers track along the stream. At the beginning, it didn't look very inviting: 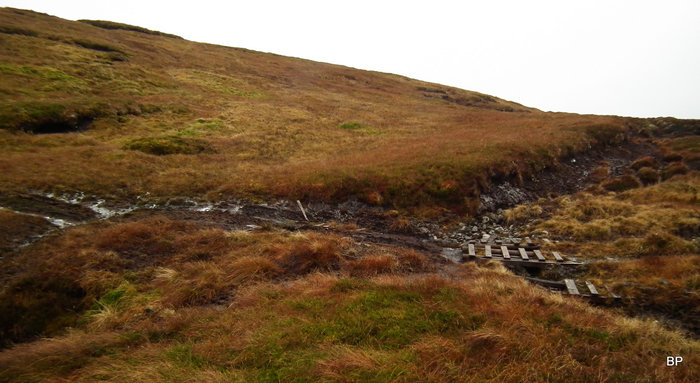 Later, it became more grassy and provided an easy escape down to the hydro track. On more even surface, my knee didn't hurt as much and I could walk at reasonable pace. Or perform silly maneuvers

On the way back, we took the new South Loch Ness Trail to the car park: 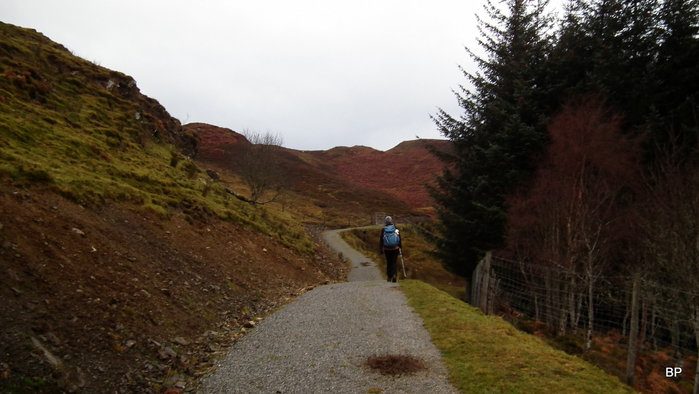 It wasn't a very ambitious walk but in given circumstances, the best we could do. Carn a'Chuilinn is a cracker in winter conditions and should be saved for a snowy day. And it looks like winter has now arrived in the Highlands so hopefully, my next report will show Scottish hills in completely different light. If we manage to get out on the high ground before all the snow melts.

Re: Carn a'Chuilinn: back on hydro track

A fine hill in the winter. I had been up there before the hydro scheme or windfarms and a shame to see the damage done. A good ascent is from the big bend on the River Tarff, though there were wild boar running about there.

Also you need low water levels to cross the Tarff.
Beinn a' Bhacaidh that you mention is a fine hill in summer and winter and a great viewpoint. 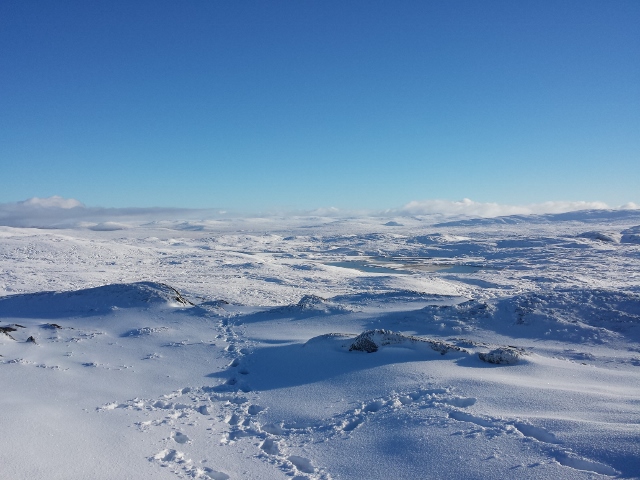 Good to see your pics and a report from this area. There aren't many, and its very underrated part of the world. Cheers.

Re: Carn a'Chuilinn: back on hydro track

Sunset tripper wrote:Good to see your pics and a report from this area. There aren't many, and its very underrated part of the world. Cheers.

Thanks ST, I agree the area east and south of Loch Ness is not very popular. Personally, I really liked the hills of Corrieyairack Pass (Gairbeinn and Corrieyairack Hill). Very few walkers bother to do a full circuit of these two since Corrieyairack Hill has been demoted from Corbett to just a top, but it is a lovely high level traverse, even despite the Beauly-Deny pylons in the glen below. Hopefully, we will go back there in full winter conditions. That is if we have a good winter this year and my knee gets better...
Views from Corrieyairack Hill: 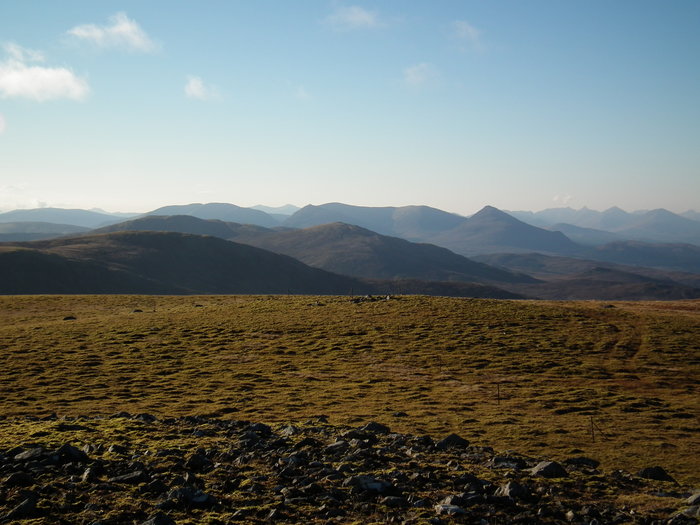