Despite being an easy hill to get to from Inverness, I'd never done Meall a'Chaorainn before .... partly because I hadn't realised it was a graham when I first did Fionn Bheinn, but mainly because the infamous peat hags held no great appeal. A report by TheTortoise earlier this year talked about a route which avoided the hag hell, so I decided to give it a go today, one of those rare days when the weather in the west was forecast to be drier than the east. Wasn't sure how long it would take, but even with the depressingly few hours of daylight just now, I thought a sub2k along the road, Bidein Clann Raonaild, could maybe be done as well while I was in the Achnasheen area.

our_route.gpx Open full screen  NB: Walkhighlands is not responsible for the accuracy of gpx files in users posts
The fence along the A832 has a handful of gates in it, but the one to start the walk at was fairly easy to spot, and has parking for 2 or 3 cars off the road. No stile or walkers gate, climbing over the vehicle gate was the only way to go - so might not be a good start for anyone with a dog. I parked off the tarmac as I thought the gate was maybe in use, though I soon found out the tarmac only lasted a few metres on the other side, and the rough track from there looks like it gets little use other than by deer and the occasional hillwalker. 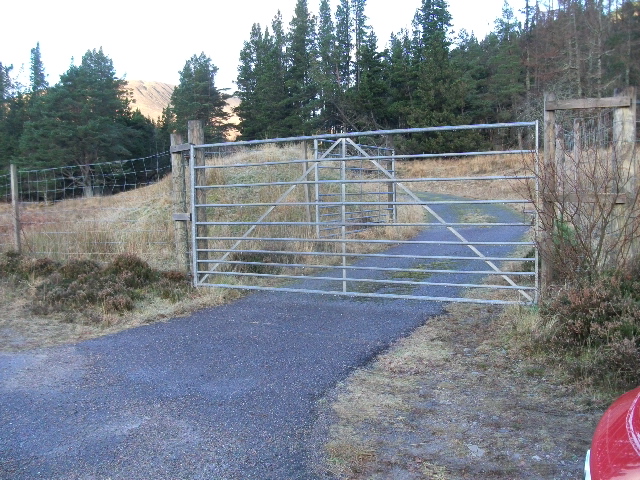 This is the gate to start up the track from. Room for a car or two either side. 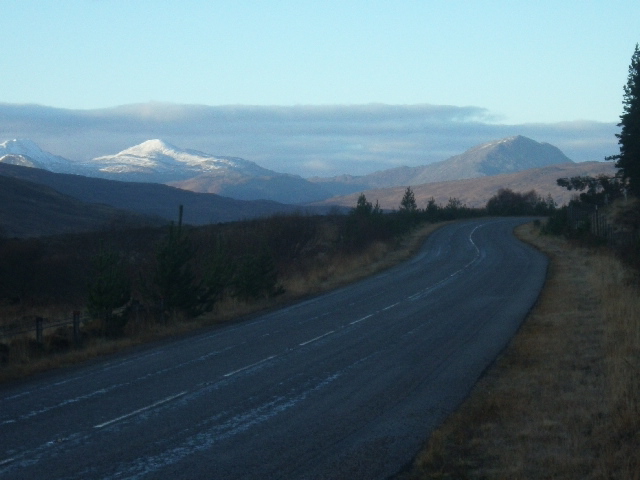 View along the road from where I parked 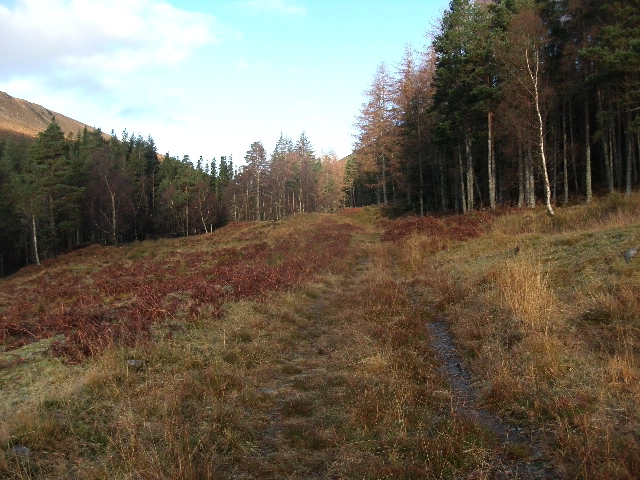 The tarmac doesn't last for long, the track up the glen then becomes rougher but still easy to follow

The track, which becomes more of a stalkers path, passes through a short section of woodland then on up the Feadan Duchairidh. It's an easy gradient and an enjoyable walk, with the superstars of the area coming in to view as height was gained. The path bends round to the right to head north east and shortly after that I left it to head up the slopes on the right. After days of heavy rain there was, inevitably, some wet ground, but nothing bad - my feet stayed dry in hiking boots. The terrain up to and across the plateau varied between grassy tussocks with puddles, stonier sections, and short grass ....all easy stuff, no getting trapped in a web of peat hags. 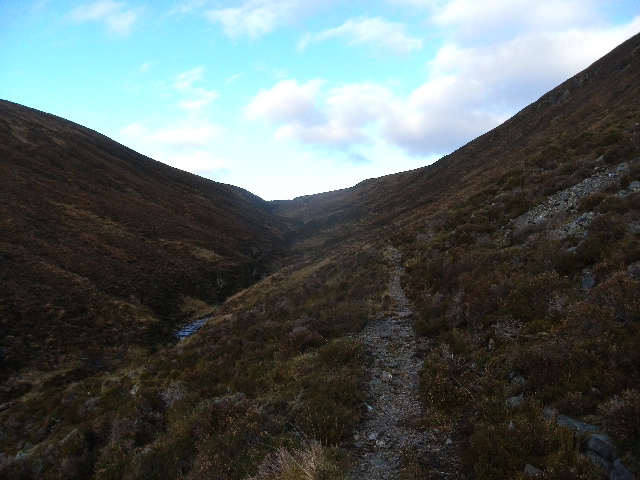 Path continues up at a nice gradient 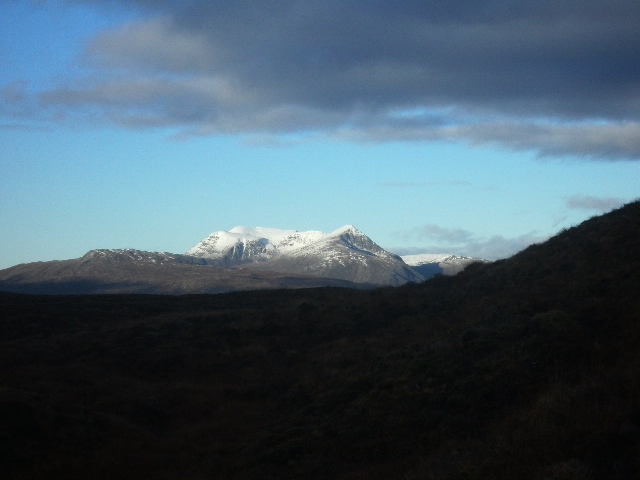 Pano with Liathach and Beinn Eighe left and Slioch right 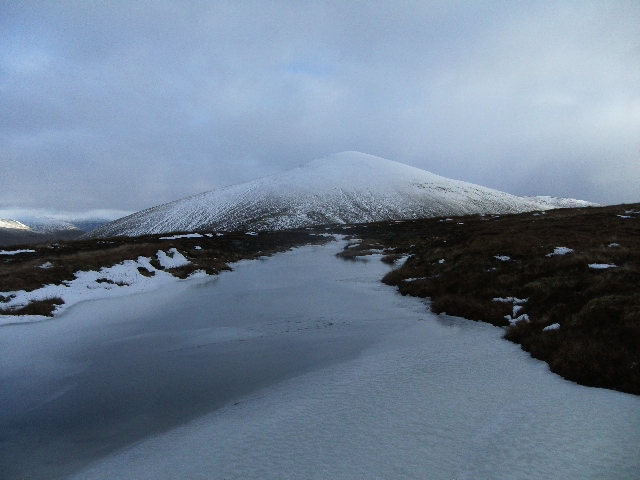 In the other direction, Fionn Bheinn 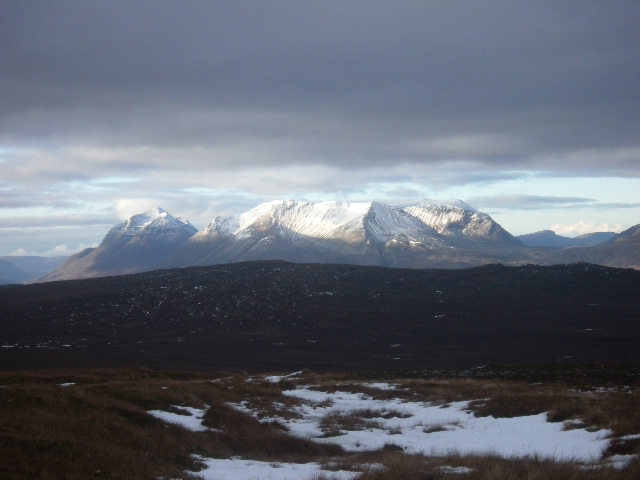 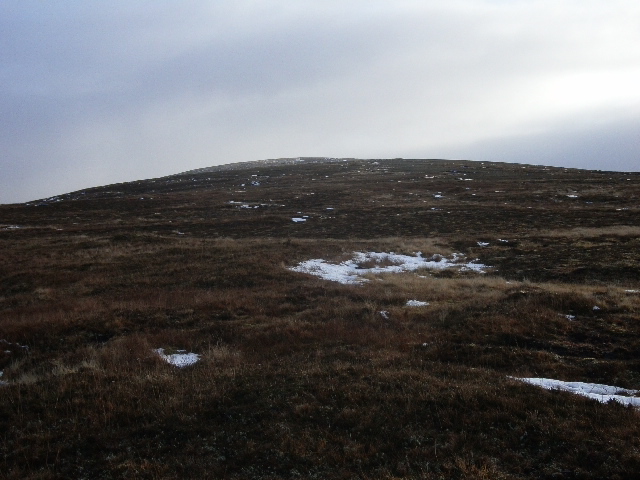 The wide, long plateau, gradually heading up to the summit

The views I'd had to the west while heading up had given me the impression it was a lovely sunny day, but when I got to the summit and looked east, the cloud was lower. I had some light snow when I was at the top, so didn't hang around the summit for long, soon heading back down the same route. A nice route this, no knee-destroyingly steep descent. 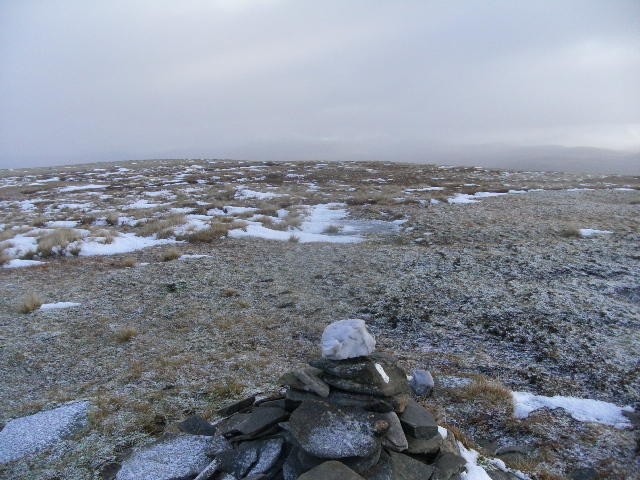 Summit cairn - Not much of a view to the south east 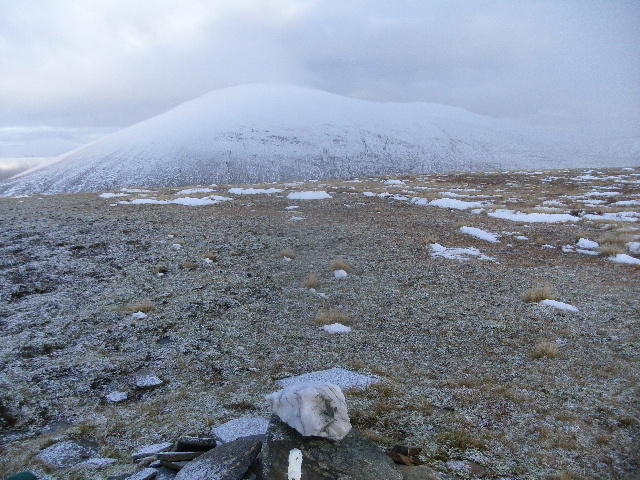 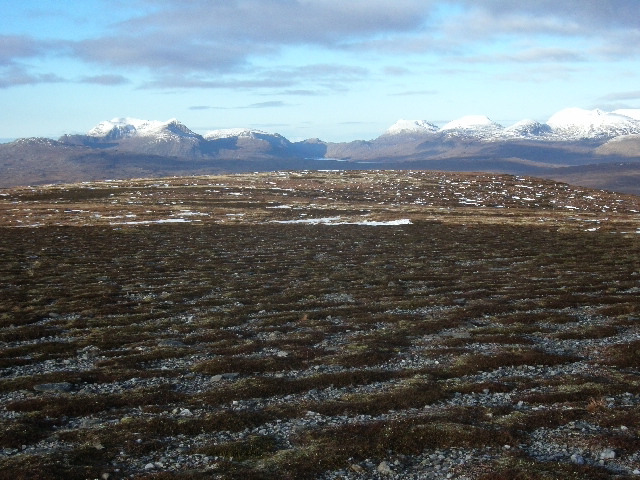 Getting the nice views again on the way down facing north west, better weather over Slioch and the Fisherfields

our_route.gpx Open full screen  NB: Walkhighlands is not responsible for the accuracy of gpx files in users posts
I was surprised to find 2 other cars already parked by the gate area for the beginning of the next walk; I'm usually on my own on grahams and sub2ks. I didn't know much about Bidein Clann Raonaild other than there was a good track all the way to the summit cairn, beside a telecomms mast. To be honest, I had in my head it would be a relatively uninteresting walk just to give me a little extra exercise for the day and tick off a summit, a walk to tag on after doing another hill in the area as I had time. What was I thinking?! It's in Torridon - No hill is going to be uninteresting! It was a straightforward walk up the track, one gate to climb, but the weather was beautiful and the views stunning. Passed one couple heading down to their car and saw someone else in the distance heading off from the summit for a different route down, but it was totally tranquil at the summit. The mast and associated buildings/cabinets can't be ignored of course, but with your back to them, it's a lovely viewpoint. No photos of the Coulin munros due to the sun in that direction, but the views all round are great from Bidein Clann Raonaild's summit. A fine wee hill for little effort. 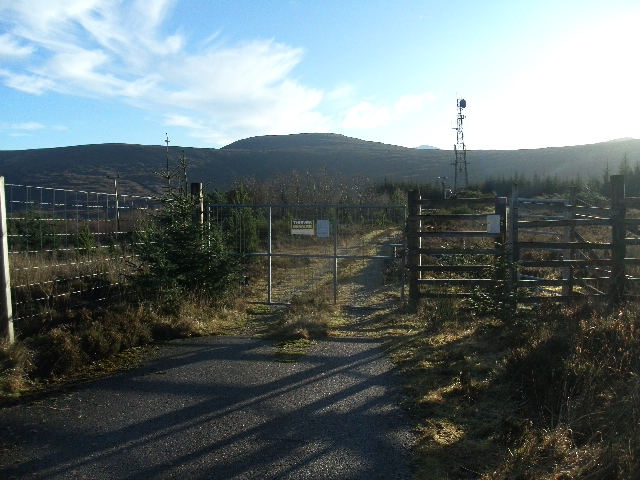 Start of the next walk ... pedestrian gate to the side of this one, so no clambering over 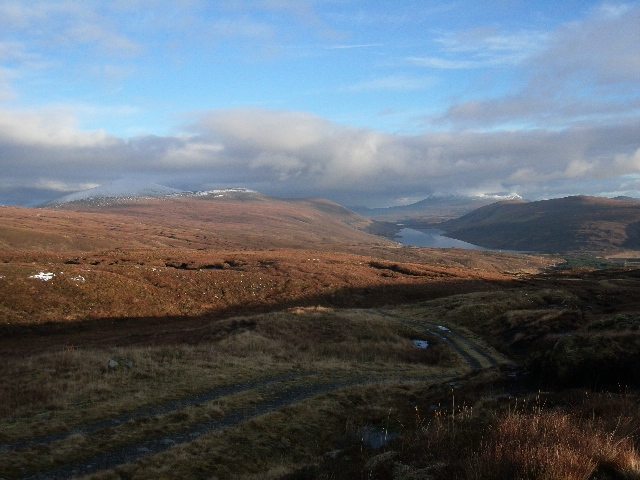 Good track all the way. Looking back to Loch a'Chrosig, snow covered Fionn Bhein and Meall a'Chaorainn just in front of Fionn Bheinn 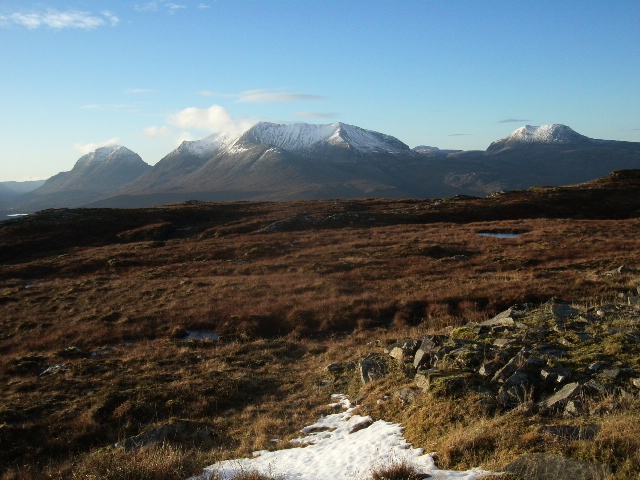 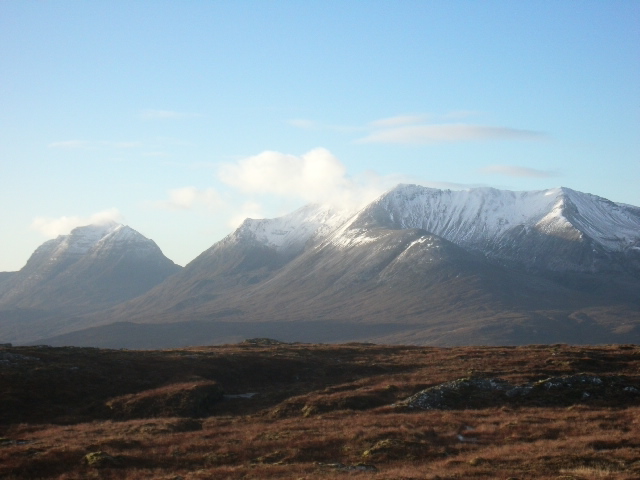 Zoomed to Liathach and Beinn Eighe 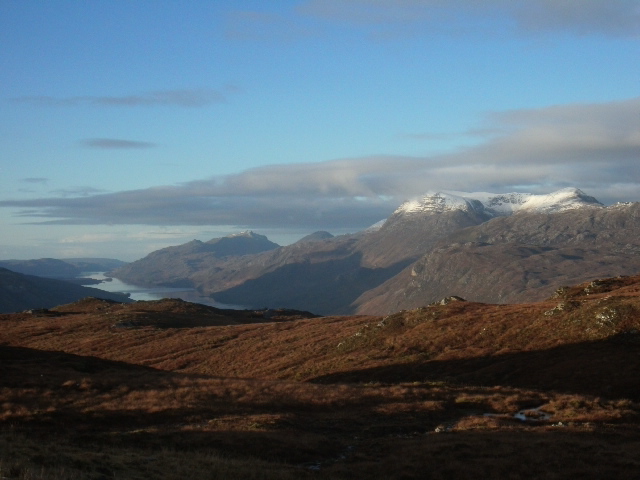 I was wondering about this approach to Meall a'Chaorainn, looks like a good alternative for a shorter day. We combined it with Fionn Bheinn but I always felt we didn't explore this Graham properly.

The standard route might be peat-haggy but honestly, I had done worse. Car na Tri-tighearnan for example. I think poor Meall a'Chaorainn suffers from being a sidekick to a Munro...

From my memories of these two their approaches are about as contrasting as you could find - but I did go by the usual hag route for the Graham.

dogplodder wrote:From my memories of these two their approaches are about as contrasting as you could find - but I did go by the usual hag route for the Graham.

Yes, going by other people's walk reports, I thought that might be the case

BlackPanther wrote:I was wondering about this approach to Meall a'Chaorainn, looks like a good alternative for a shorter day. We combined it with Fionn Bheinn but I always felt we didn't explore this Graham properly.

The standard route might be peat-haggy but honestly, I had done worse. Car na Tri-tighearnan for example. I think poor Meall a'Chaorainn suffers from being a sidekick to a Munro...

I'm rubbish at getting up early on my days off; no problem in summer when it's light until late and I can start a hill walk at lunchtime, but in winter it means I have to stick to hills within easy travelling distance of home and which aren't epic treks! So yes, this route up Meall a'Chaorainn was ideal for a short day. I'll happily do it again, which tends not to be the case with peat-hagged routes unless they're frozen solid or scorched dry. It was the latter when I did Carn nan Tri-trighearnan a couple of years ago from Finglack, but I still don't remember it as being one I'm desperate to repeat!

BlackPanther wrote:I was wondering about this approach to Meall a'Chaorainn, looks like a good alternative for a shorter day.

We used this route in descent, for a short winter's day, having gone up directly from the road via another gate about 300m E of the one into the forestry. There is a steepish section through the belt of old pines, but it soon eases off.