The 'rough mountain' of Skye

The 'rough mountain' of Skye

Having ascended our first Munro yesterday, and the cloud forecast being at about Munro height, Ben and I went for a nifty Graham/Corbett combination on our visit to Skye. The contrast between the Red and Black Cullins is so striking, even when viewed from a long way off, to combine the two in one walk seemed like a nice idea. Marsco and Garb-bheinn did not seem that far apart that they couldn’t be covered in a short day. The WH route to Marsco starts at Sligachan and has a longer walk in when compared to the GB route which starts on the road around the end of Loch Ainort, the latter could also be more circular in nature. So, the plan was to pick off Marsco, GB and possibly Belig in one round. Marsco from Sligachan (a classic view if not a classic photo)

Another reason for walking in this area was that for our first holiday with our son Ben. In 1988, we stayed at Luib, just down the shore of the Loch at the foot of Glas-Bheinn Mhor. The shores of the Loch opposite were somewhat bleak with several streams cascading down in wet weather but the views along to the Red Cullins and beyond were striking. We didn’t ascend any hills that week but had a wonderful walk to Camasunary, on Loch Scavaig, from Kirkibost. It was likely we could see both from one or other of the two hills. View down to Loch Ainort, and route up, we stayed in cottage about half way down in 1998. View down to Camasunary from Marsco, we visit the beach in 1998 Marsco from start of walk

Starting at the parking area on the A87 across from the Eas a Bhradain waterfall we set off up the boggy slope to the East of the Allt Coire nam Braudaran. Without any definitive path we wandered uphill towards the small hill of Druim Eadar, with GB straight ahead and Marsco off to the right. As we go onto dryer ground, we veered off to the right (West) of the nose and contoured around to the bealach at 323m. This was also boggy but relatively easy to pick a way across. 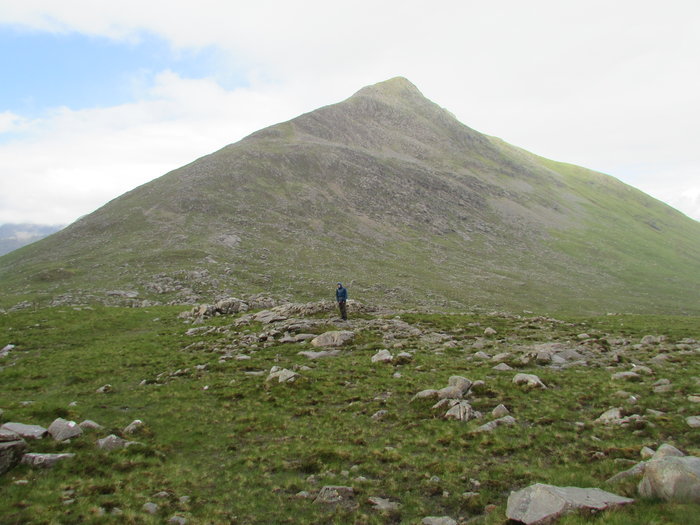 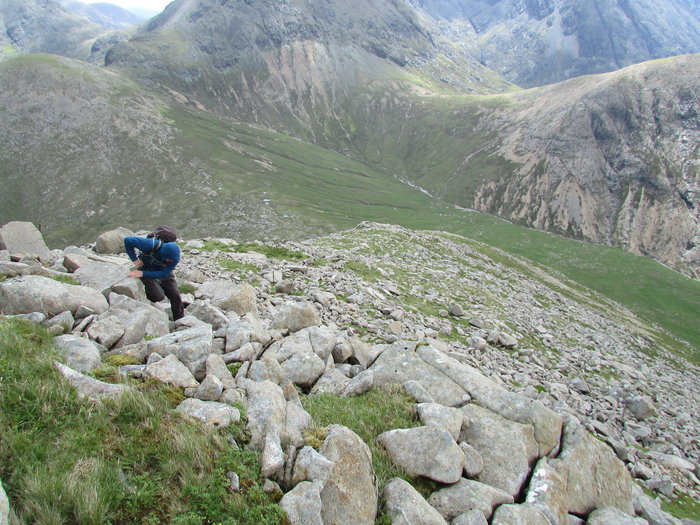 The East spur of Marsco is reasonably shallow on the map but interspersed with large flat boulders that are set too high to step up, sticking to the grass made slow going in the damp conditions. We followed an old fence line till the first top at 643m. The ridge between it and the main top, at 736, beautifully narrow but grassy so a nice trip-free stroll, the fence line veered off North. The view from the top was tremendous, both Cullins, GB and Blaven, sea lochs and islands. It should be remembered that this was only a Graham. Looking back East we could clearly see the route to our next target, back down the spur, across the bealach and along the contours on the South side of Druim Eadar onto the North ridge of GB. The latter being an outcrop of the black Gabro which makes the Cullins so distinctive. The slopes of Druim Eadar were stony but dry, we were soon onto the Gabro and the scrambling commenced. Nothing too demanding but the East side of the ridge was precipitous and the route always near the crest. The peak (at 808m)came up far too soon but offered fantastic views, especially of Blaven and Clach Glas, a enough shelter from the wind to allow us to eat lunch. This became one of our newly acquired habits, to eat as high up as possible, partly to enjoy the views but also to avoid that horrible feeling when you make a major effort after food. The South slope of Druim Eadar

Panorama of The Black Cullin from lower slope of Garbh-bheinn Looking down the Northwest ridge to Druim Eadar, showing change of rock underfoot 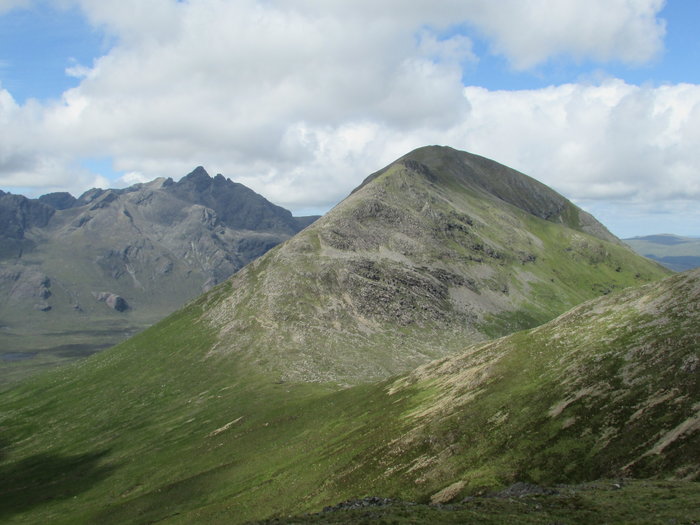 The hill of the seagull aka. Marsco Ben scrambling on the first part of the Northwest ridge 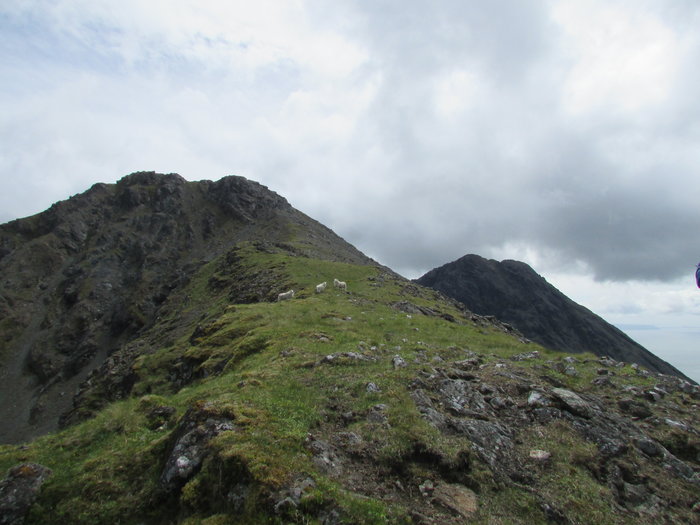 The summit of Grabh-bheinn; waiting for the slow coach. 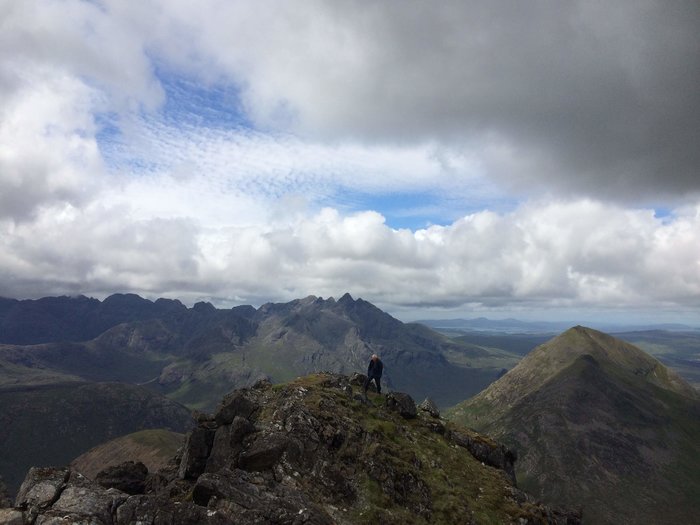 West end of the summit 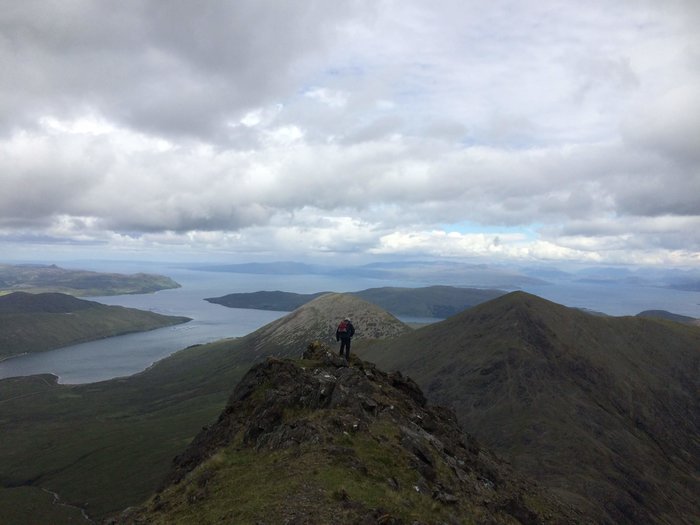 East end of the summit The route down off GB, to the Notheast was initially steep, with decent sized boulders and steps, and great care was needed. Lower down was a scree slope (my first one of any size) which is not obvious from the map but a reasonable size. By this time it had started to drizzle, the rain having held off most of the morning. By the time we got down to the Bealach na Beiste the rain was heavier. The route East down to the Bealach na Beiste, Belig beyond 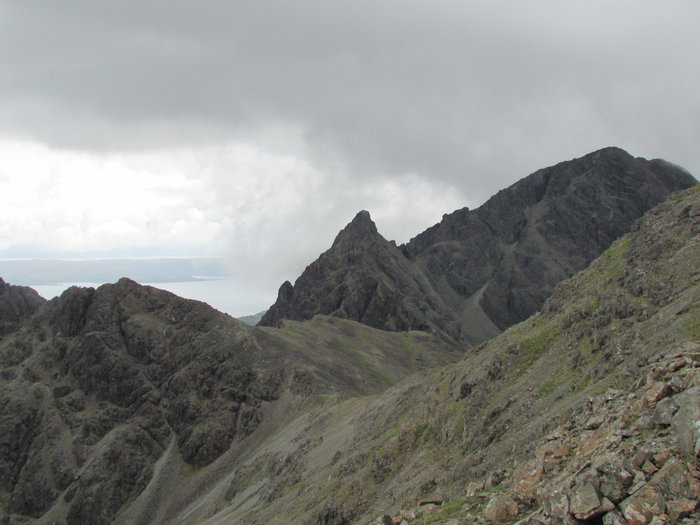 Clach Glass seen from the North, in retrospect we should have wandered over to have a closer look but is started to look like rain coming. Garbh-bheinn views from the lower West slope of Belig

Noting that the translation of Garb Bheinn is rough mountain I presume that all the other mountains on Skye are less rough; we are looking forward to strolling up them at some point.

Given that we had walked up two really good hills and we were off to Torridon that evening so we dipped out of Belig. We had Beinn Alligin lined up for the next day and chose a warm hostel and early night over a cold wet windy ridge. That’s what happens when you grow up in the Soft South; no doubt more hardy Northerners would have gone for it.

In the North the weather’s always doubtful but the scenery never is.

Re: The 'rough mountain' of Skye

"In the North the weather’s always doubtful but the scenery never is." And you were in absolute Premier League scenery! Both beautiful and inspiring. I'd forgotten what amazing views one gets from these viewing points.